Lenovo’s latest includes a
Core i7-5600U processor that easily trumps the Dell’s Core i5-5200U
chip: it’s 400MHz faster, has more L3 cache and can stretch further with
Turbo Boost. The difference between the chips is highlighted in
benchmarks: the Carbon’s PC Mark 7 result of 5,393 is around 500 points
better than the Dell.

There’s clear ground between the Lenovo and
the Dell, but the Carbon can’t keep up with the Macbook. That’s
initially surprising, because Apple’s machine only has a Core i5
processor, but closer examination reveals the Macbook’s chip is 100MHz
faster and has Intel Iris 6100 graphics that overpower the Lenovo’s HD
Graphics 5500 chipset.

Blows are traded between the two machines
in other benchmarks. The Lenovo’s Geekbench score of 5,194 couldn’t
match the Macbook’s 7,010, but the Carbon scored 17.1fps in the Unigine
Heaven gaming test, which snuck ahead of the Apple’s 17fps pace. 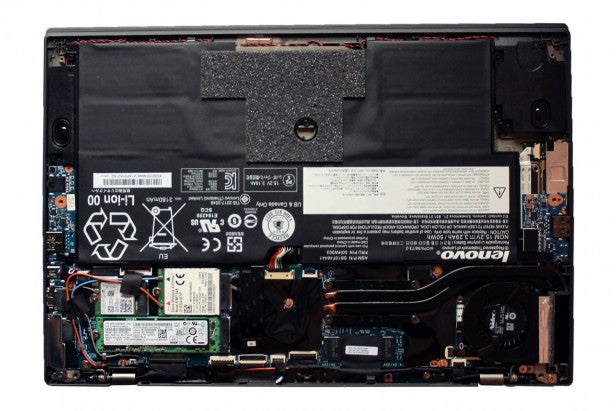 The
Carbon improves on the Dell and competes with the Macbook, but the
bottom line is that this machine has reasonable speed for work – office
applications and photo editing tools will run without complaint, and
only the most demanding software will see the Carbon struggling.

The
Lenovo falls behind its fruit-themed rival in storage tests. The Carbon
comes with an M.2-based Samsung SSD, but its sequential read and write
speeds of 482MB/s and 256MB/s are underwhelming, though still far
quicker than a normal hard drive. Apple’s machine, conversely, deploys
flash storage that returned read and write speeds of 645MB/s and
1.2GB/s. When it comes to application and system boot times, it’s no
contest.

We didn’t experience any issues with heat or noise. The
processor’s maximum temperature of 68 degrees is far short of its
thermal limits, and little heat made it to the outside of the Carbon;
the right-hand side of the base got a tad toasty, as that’s where the
processor is located, but it wasn’t hot enough to cause discomfort.

The
ThinkPad’s battery lasted for ten minutes short of ten hours in our
standard 40% brightness battery test. That’s a fantastic result, but the
competition lasted a little longer. Dell’s XPS 13 took almost eleven
hours before it ran out of juice, and the Macbook Pro lasted for twelve
hours in a similar light-use benchmark. As ever, it’s another area where
the Carbon is very good – but its competitors are just that bit better.