ThinkPads
come with a certain weight of expectation – not surprising given that
previous machines have possessed some of the market’s best keyboards.

The
Carbon’s slim dimensions haven’t hindered the keyboard’s quality. The
layout makes sense, the keys are large with a nice pronounced dip to
cradle your fingers, and they’ve got more travel than most Ultrabooks.
The good travel is joined by a typing action that’s consistent and
responsive – we’d say it’s a little soft, but it’s a tiny criticism that
won’t impact on day-to-day use. 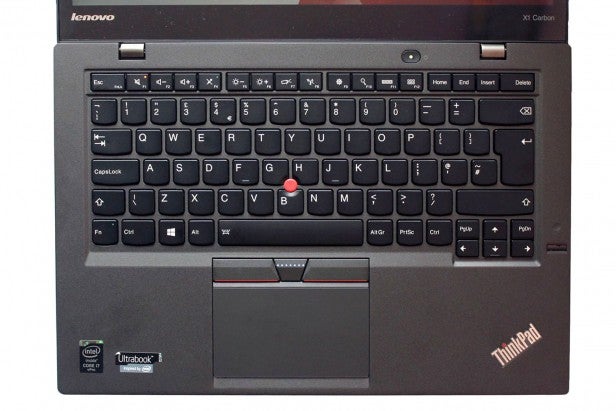 The
etched-glass trackpad is fast and consistent, and the two built-in
buttons are snappy. The discrete buttons used for the trackpoint have
familiar ThinkPad reliability, and the point itself is decent; initially
a bit twitchy, but fine after a while.

The keyboard might match
the competition, but the trackpad – as good as it is – is bested by the
Macbook Pro’s Force Touch pad, which is something no Windows laptop can
rival. 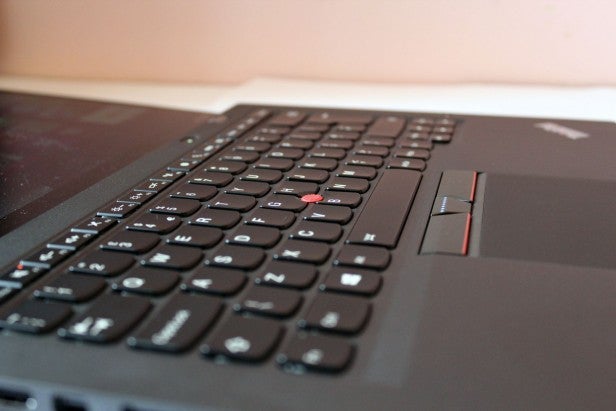 We’ve
sampled the priciest X1 Carbon specification that costs a whopping
£1,736.99, but cheaper configurations are available. These include
various options with and without touchscreens, with either 1920 x 1080
or 2560 x 1440 resolutions and with different memory and storage
options.

In
comparison the MacBook Air starts at £850, the Dell XPS 13 starts at
£799 and even the MacBook Pro starts at £999. They’re all big savings, but they’re all consumer laptops – so you miss out on Intel vPro, TPM protection and the ThinkPad’s internal access.

The Carbon also comes with a three-year warranty, which is a huge chunk of added value, and important for long-term peace of mind. In fact, it’s so generous we can’t help but wonder if this laptop’s
appeal would be broadened by making this an optional extra and dropping the price by £200 – yup, that’s the cost
of extending a warranty for that long. 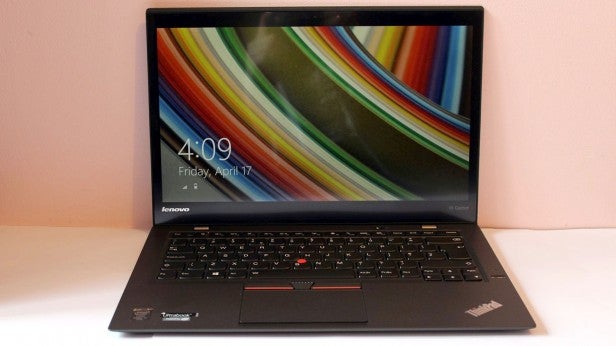 Should I Buy the Lenovo ThinkPad X1 Carbon?

Lenovo’s
latest laptop is impressive in most departments, and its business features give it office appeal that its consumer competitors just can’t match – even if those machines are superior in other areas.

It’s thin, light, well-made and
stylish in its own utilitarian way. However the Dell XPS 13 and MacBook
Air are lighter and slimmer while the Macbook Pro has similar dimensions
but packs in more features and performance. The Lenovo’s screen is sharp and high
quality, but it’s bested by Apple’s machine that has better scaling and
class-leading quality, and the Dell pips the Lenovo in benchmarks.

The
Lenovo machine is faster than the XPS, but it’s slower than the Apple
laptop in application and storage benchmarks, and the Carbon’s otherwise
impressive battery life doesn’t quite match the other two devices.

If you’re after a consumer laptop, then, Dell or Apple’s machines are better options – but the Carbon’s strengths lie in the office. It’s got vPro, TPM and a fingerprint reader, its internals are accessible, and its three-year warranty is generous.

The consistent good quality and extra business features drive up the price, so you’ll have to pay more for this machine than any of its rivals. If you’re after a lightweight business Ultrabook, though, it’s worth that extra money – few machines are better in the boardroom than this. If you’re happy with a consumer laptop, though, save the cash and stick with Apple or Dell.

The Carbon is a good laptop
in every department and a big improvement over its predecessor, and it’s packed with business features that its consumer rivals don’t offer – including that generous three-year warranty. That makes it an ideal ultraportable for the office, but its competitors prove superior in some areas: the MacBook Air and Dell XPS 13 are
slimmer, lighter and cheaper while the MacBook Pro offers more
features for similar bulk and a little less cash. If you crave the warranty, TrackPoint and business features, then the Carbon is an excellent office Ultrabook, but if not, the Apple and Dell machines offer better value and balance.