The ThinkPad 10’s screen is largely very good. Its 1,920 x 1,200 pixel resolution makes it nice and sharp and its use of IPS technology means viewing angles are excellent.

The resolution is so high that you’ll want to use Windows’ resolution scaling function to make text and icons appear bigger, and this can lead to some apps not scaling and looking either really small, or a bit pixelated but largely it works well.

Firing up my colorimeter I measured the maximum brightness at 409nits, which is impressively high – anything over 300nits is decent – and should mean this tablet copes well even in daylight. However, this combines with a black level of 0.499nits, which is a touch high, making for a contrast ratio of only 819:1. 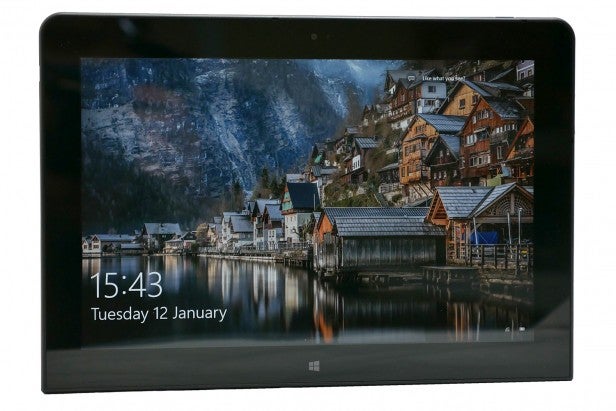 I generally consider 1000:1 and higher to be the mark of a really good display, though in use the fact that blacks looks slightly too grey is not as noticeable as you’d expect. This is largely because you’ll seldom use the display at full brightness so the black level correspondingly drops.

Elsewhere my tests revealed a modest 68.5% coverage of the sRGB colour space – top quality displays hit 90% and above – but otherwise colour temperate (6983K) and Delta E (0.1) are pretty much on point.

There’s a touch of backlight bleed in the top right corner but largely the display is fine. Not spectacular but good enough for most uses.

What really sets this tablet apart from most of the same size and shape is its use of Windows 10 as an operating system. This opens it up to a vast range of useful software and desktop-style features but it also means this tablet still trails far behind Androids and iPads for general usability.

While Windows 10 is a vast improvement over Windows 7 and previous for touchscreen input it still has myriad issues from something as basic as the way the OS handles the onscreen keyboard to adjusting settings such as automatic display dimming – a process which takes a full 10 unintuitive clicks to complete (actually, depending on implementation some devices do support a much quicker way to access this).

The result is that as a pure general purpose tablet it’s still a no-brainer to get an Android tablet or iPad. The counterpoint for this device might’ve been its keyboard dock but as Lenovo has failed to provide it I can’t say one way or the other.

For what its worth Windows 10 does at least now include some useful touch-friendly apps to get you going, such as a Calendar, Contacts, Mail, Maps, News, and more. Plus the Windows Store makes accessing more apps easier and more intuitive.

But the fact remains that this tablet will mainly be wanted by businesses for business-specific apps, and that’s where Windows 10 is most useful. You can run full Office, accounting software, etc.

Also, there really is something to be said for compromising on usability to be able to use a USB stick or peripherals, in just the same way as you can on a normal laptop or PC.

Windows 10 also has a biometric login system now and it worked flawlessly with the ThinkPad 10’s fingerprint scanner. You have to swipe your finger in the right direction but it worked quickly every time when I did.