A tablet and smart speaker with display in one, Lenovo has managed to inject more life into the tablet concept

What is the Lenovo Tab P10?

The Lenovo Tab P10 breathes new life into the standard concept of the tablet. On its own it’s a fairly typical Android tablet – and not an iPad challenger at that. However, when attached to the supplied speaker dock, the device converts into a big-screen Alexa smart speaker.

It’s a smart home hub in the kitchen; a classic time-waster’s tablet in the living room.

Neither part sets any new standards in its respective field, but the neat execution makes the Lenovo Tab P10 worth considering. Yes, for its £250 price you could buy a Kindle Fire HD and a better-sounding wireless speaker with the spare £100. However, you’d miss out on the relative elegance on offer here. The tablet also has several features missing in the Kindle Fire HD 10. 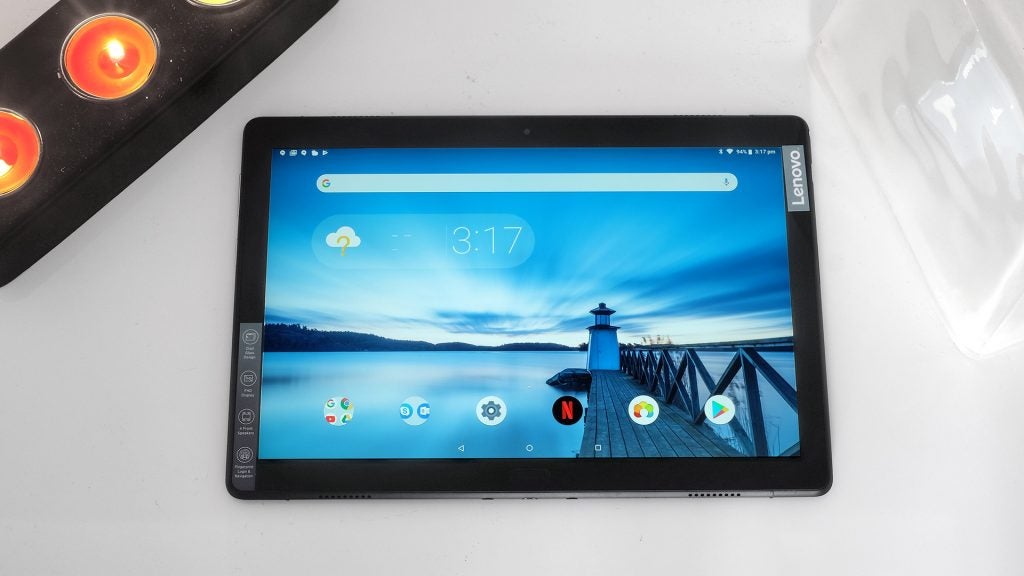 The Lenovo Tab P10 looks and feels higher-end than its rival from Amazon. Its back and front are flat panes of glass, with a sandwich of aluminium in the middle. Construction is similar in style to that of the much more expensive Samsung Galaxy Tab S4.

Lenovo’s tablet also has much thicker screen surrounds, which make it look a little more dated than both the Samsung and another obvious rival, the often-overlooked Huawei MediaPad M5 10.8. Although the Lenovo Tab P10 doesn’t look cutting-edge, it also avoids the cheap feel of most sub-£200 alternatives.

This is a classic widescreen tablet, designed to be used in landscape orientation rather than held straight up. There’s nothing to stop you using it in portrait orientation, of course, and if you want to read articles or graphic novels on the Lenovo Tab P10 then you should do just that. However, note that its weighting doesn’t feel as at home this way around, compared to an iPad. 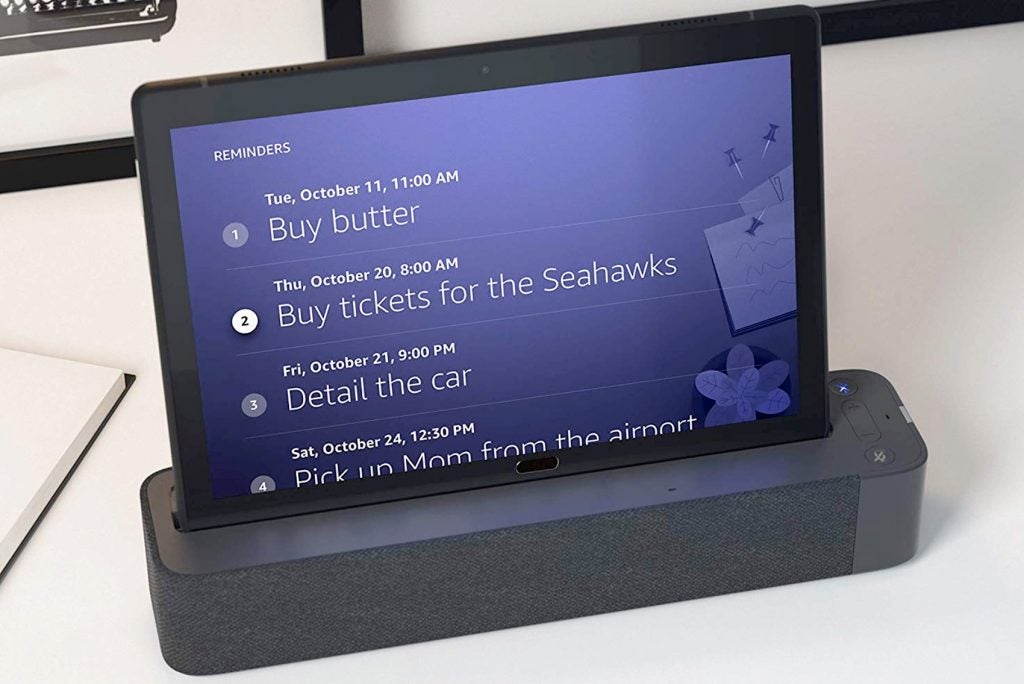 As with most Android tablets, the key to appreciating the Lenovo Tab P10 is “don’t expect an iPad”.

It has another appeal that an iPad can’t touch, however. While Lenovo lists the tablet as a solo product, most retailers in the UK sell the tablet with a speaker dock. This looks like a tiny soundbar, with a fairly smart fabric grille that covers most of its front.

The tablet slots into the top. A plastic guide keeps the Lenovo Tab P10 at a slight angle, and a plastic rest on the bottom stops the speaker dock from toppling over. In other hands, this might have risked ending up as a clunky gimmick, but Lenovo has more experience than anyone else when it comes to integrating digital assistants with tablet-like devices. It made the Smart Display, a Google Assistant hub. 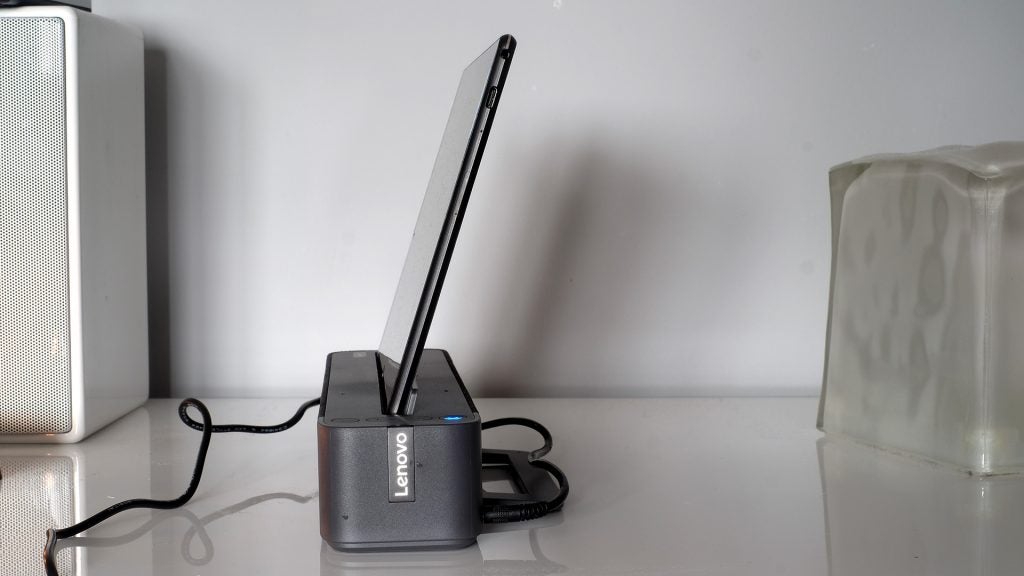 When you slot the screen into the dock, the Lenovo Tab P10 switches to an Alexa display that cycles through recent headlines, and sets the dock’s microphones to listen for voice commands. You can interact with it just as you would an Echo smart speaker. Alexa skills, which are like apps for the Amazon voice assistant, function just fine. Obviously, standard requests for music and fluffy trivia work too.

Lenovo has attempted to recreate the sensitivity of an Echo speaker, using an array of three far-field microphones. However, it isn’t nearly as sensitive as an Echo; you need to speak fairly clearly, and at a decent volume.

But it works, especially if you intend to use the Lenovo Tab P10 as I have, plonked on a kitchen work surface as way to listen to podcasts and music while cooking. Sound quality isn’t stellar, but it does outperform an Echo Dot, and has the power needed to make music viable. 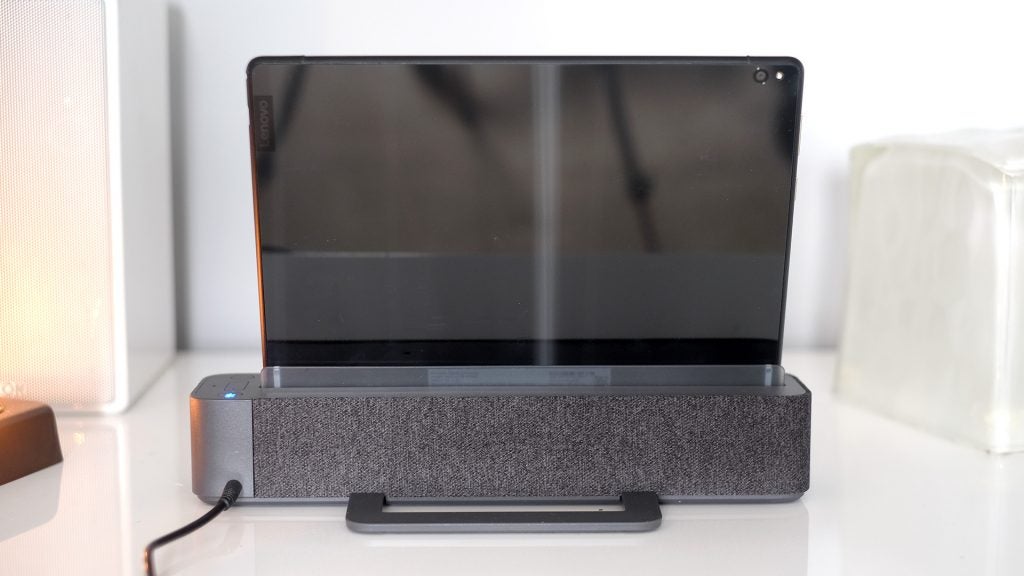 There’s reasonable bass, and enough volume on tap to compete with extractor fans, humming microwaves and other assorted kitchen sounds. The Lenovo Tab P10 dock can also be used on its own, because of the surprising way it operates.

Little metal contacts link the dock to the tablet, but this largely transfers power. The audio connection is actually made over Bluetooth. When the dock is sat there on its own, you can connect your phone and listen to music that way.

Volume and Bluetooth buttons sit on the top. 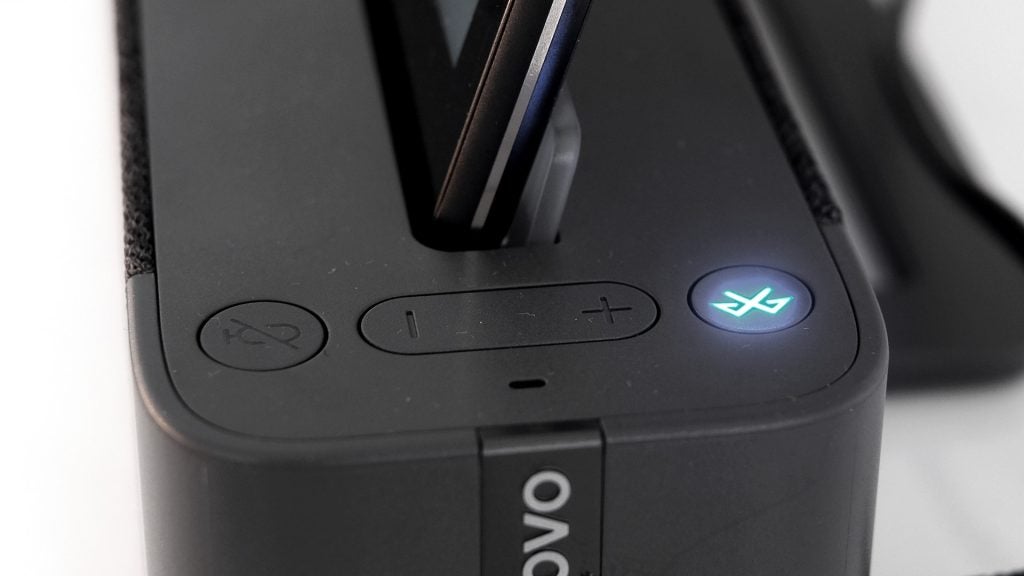 The Lenovo Tab P10 has a 10.1-inch, 1920 x 1200-pixel screen. At this size, you can see clear pixelation if you get remotely close. However, you can’t get any sharper without spending quite a bit more.

Amazon’s Fire HD 10, the Huawei MediaPad M5 Lite and the ageing Samsung Galaxy Tab A10 all use the same resolution. If you want something sharper, dig out the non-Lite Huawei MediaPad M5, which has a 1600p display. However, if you’re not keen on the speaker and can afford that spend, you’re close to the cost of a 9.7-inch iPad.

On their own merits, Android tablets struggle to compete with iPads. 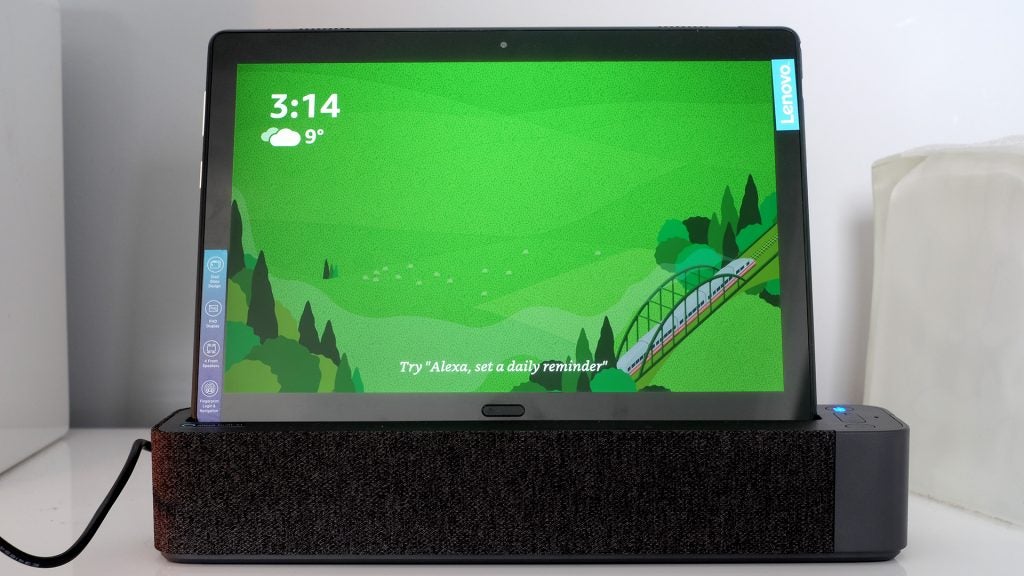 This is a rather good display for what is a mid-range tablet, however. Colour is rich, able to make the red of the YouTube logo appear almost cloyingly vivid. Maximum brightness is excellent, too. I consider this a “home” tablet, but the backlight is bright enough to deal with the outdoors reasonably well.

The solid IPS panel means the Lenovo Tab P10 has no issues with angled viewing, either. A fingerprint scanner sits below the display, letting you login in securely without a pin or password.

Lenovo has managed to refresh the tablet concept by merging it with a smart assistant. However, the Lenovo Tab P10’s software isn’t all that fresh. It runs Android 8.1.0 rather than the current Android 9.0.

This doesn’t seem a huge loss for a tablet, though. Digital Wellness features that let you monitor how long you use apps are the most striking additions in Android 9.0. And the issue with tablets is more that people have stopped using them, not that we use them too much like our phones.

At the outset, the Lenovo Tab P10 appears to use a simple, if uninspired custom interface. It’s simply Android as you’d see it on a phone, with no exploitation of the bigger screen area. However, dig into the Settings menu and you’ll discover a tablet-specific mode. 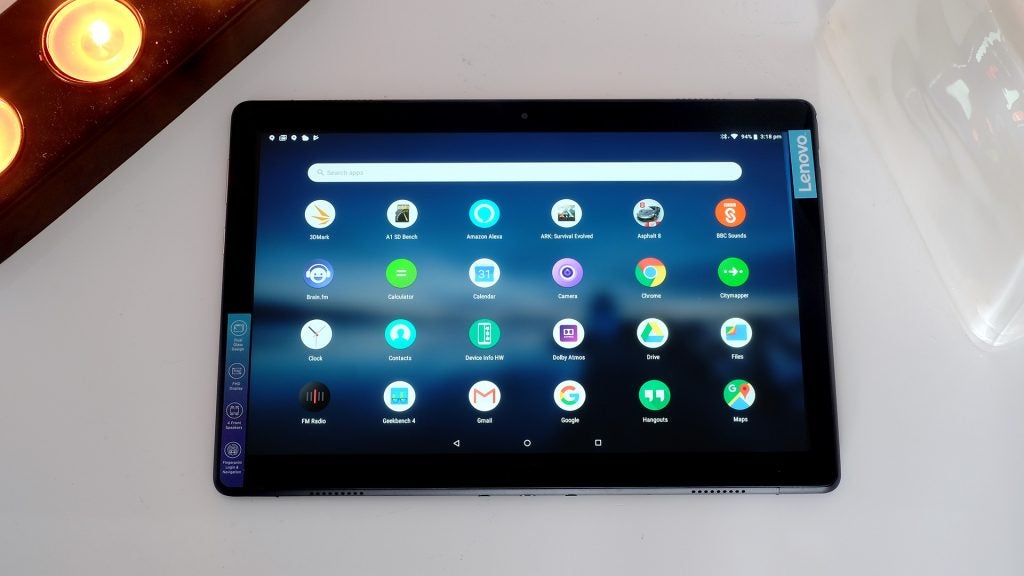 It’s called Productivity. This adds a slim bar along the bottom of the screen. It holds thumb-friendly soft keys and all the apps that sit in your multitasking menu, in icon form. This doesn’t dramatically change Android. It just pastes another interface on top of it. However, it does make app-switching more convenient and quick.

The Lenovo Tab P10 has 3GB of RAM and a Snapdragon 450 CPU, the same used by the Moto G7 phone. This is more powerful than the processors of the Samsung Galaxy Tab A and the Huawei MediaPad M3 Lite.

Performance is less than perfect, though, and in spots a little worse than I’d expect from the processor. There are no truly disruptive problems, but often the Lenovo Tab P10 seems a little slow off the mark when brought out of standby or, occasionally, when switching between apps. 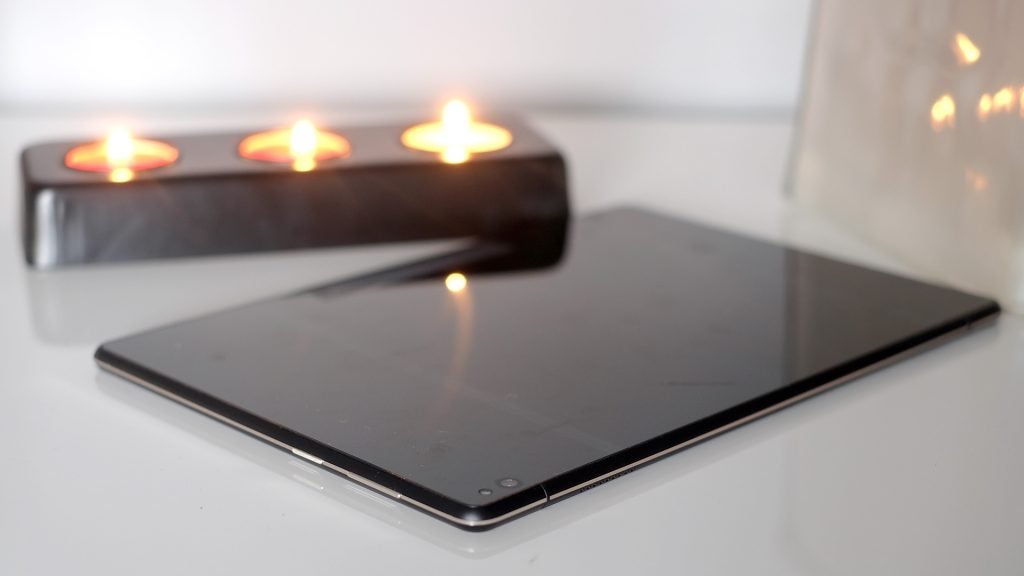 Considering Android phones with the same CPU feel a bit nippier, this may improve with software updates – if Lenovo releases any.

Gaming performance is solid for the price, but obviously not on a par with a higher-end Android tablet or the “basic” 9.7-inch iPad. You can play Ark: Survival Evolved but it only lets you use the “Low” graphics preset. PUBG, too, is only playable with “Low” visuals. The older Asphalt 8 runs well at the “High” graphics setting, but dropping down to the level below gives the game the smoothness it needs to really shine.

Many of Android’s best games won’t get close to straining the Lenovo Tab P10, but if you’re keen on titles that look like AAA console games, bear in mind the visual cuts needed to make them run perfectly are highlighted by the larger screen here.

The Lenovo Tab P10 has 32GB of storage, which, while not exactly generous, is sufficient for quite a few titles. There’s also a microSD card slot.

Quad speakers are one of the Lenovo Tab P10 tablet’s key features. They all sit on the front: two by the top and a further two at the bottom when the table is held in landscape.

However, they’re a slight disappointment. While you get stereo sound and a sense that the audio is coming from around your head rather than a single spot, there’s little of the extra bulk or bass of the best tablet speakers. These sound quite thin. They don’t offer the performance you might expect from a quad-driver array.

The Lenovo Tab P10 has a 7000mAh battery, roughly 10% larger than the Kindle Fire HD 10’s battery. Lenovo says it lasts 15 hours, based on testing in MobileMark 2014 – a rather aged benchmark. How this is used in an Android device is also a mystery. It’s Windows software. 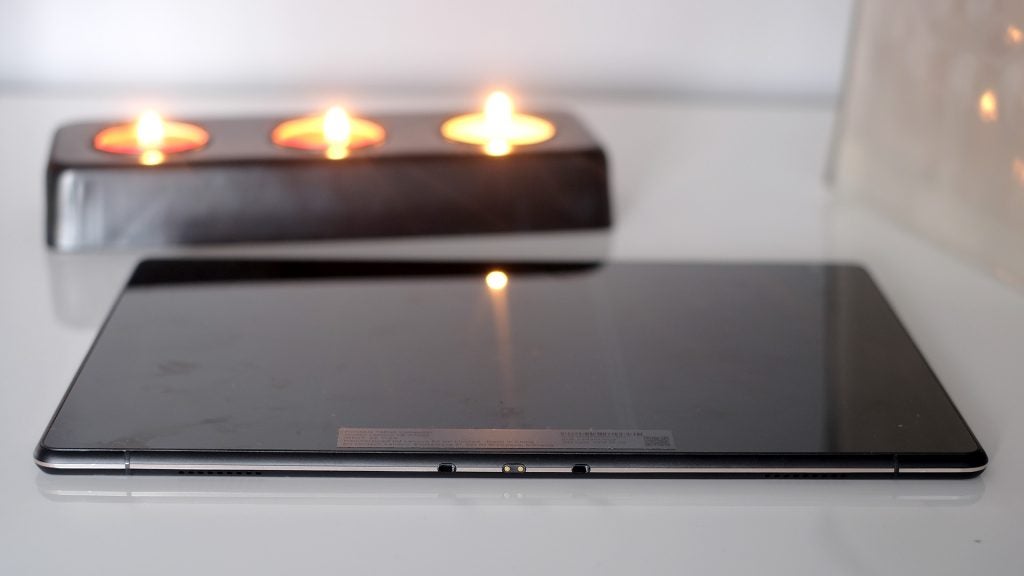 To get a closer look at how long the battery will really last, I set it to stream a long YouTube video. Six hours at around 60% brightness consumes 50% charge. Leaving it to play for a further two hours saw drain continue at the same rate, suggesting the Lenovo Tab P10 will last for 12 hours of streamed video.

This is similar stamina to an iPad Pro. It’s great, in other words, if not quite the 15-hour claim.

Buy the Lenovo Tab P10 with the speaker dock and it ideally needs to be charged on the dock. The tablet has a USB-C port, but the base uses a cylindrical power plug. You’ll need to get hold of another power adapter to charge it solo, as you get a cable but no separate power box.

Like most tablets, the Lenovo Tab P10 has basic cameras. There’s an 8-megapixel sensor on the rear of the device and a 5-megapixel unit on the front.

It has an HDR mode, but you have to switch it on manually, and it’s very slow. Standard shots are much faster to take, but since the hardware isn’t that good, you’ll get better results using HDR.

Image quality is passable at best. Dynamic range is limited even using HDR, some colour tones are muted, and there’s quite a lot of purple colour distortion. However, the Lenovo Tab P10’s rear camera does have autofocus, so it isn’t bottom-rung basic; I’ve seen tablets with far worse cameras.

Still, if you have a half-decent budget phone or better, then it will take better images.

Here are a couple of images taken with the Lenovo Tab P10: 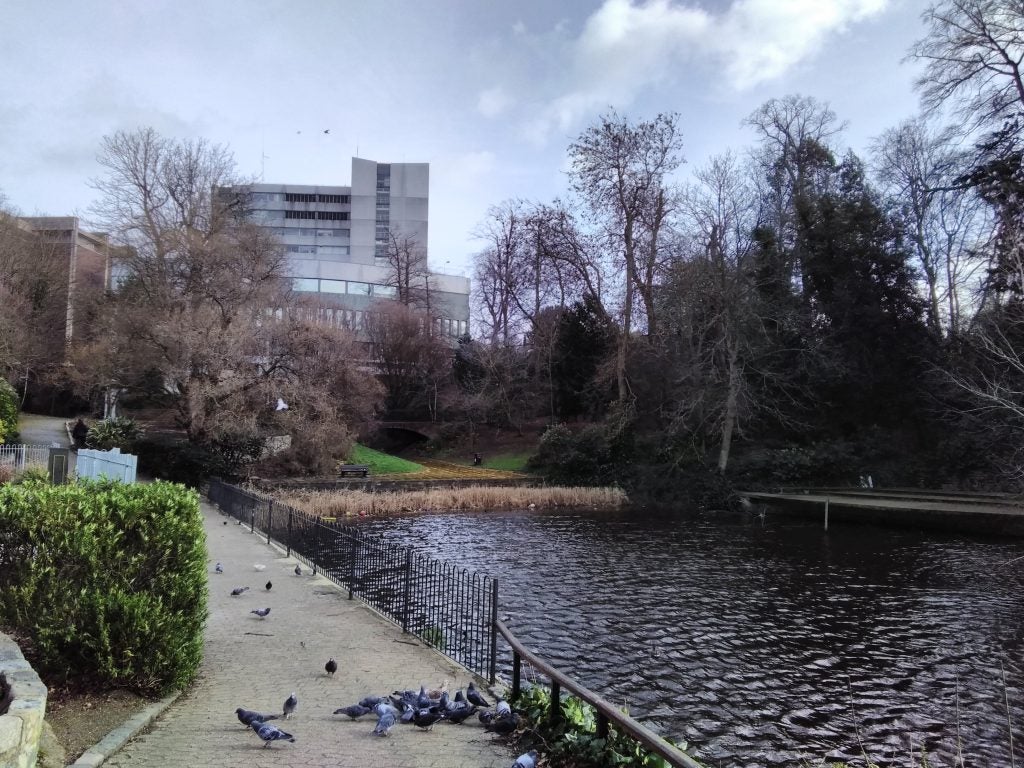 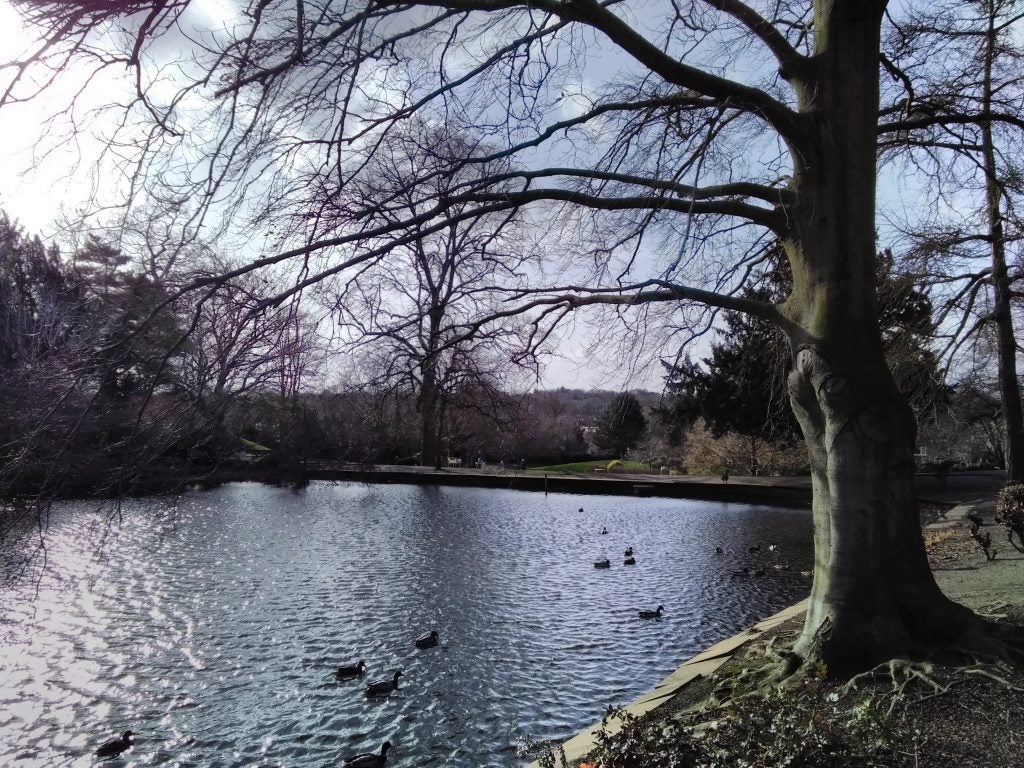 The front camera too is limited, but it takes selifes pretty quickly and will do the job for video chat and fun AR apps. 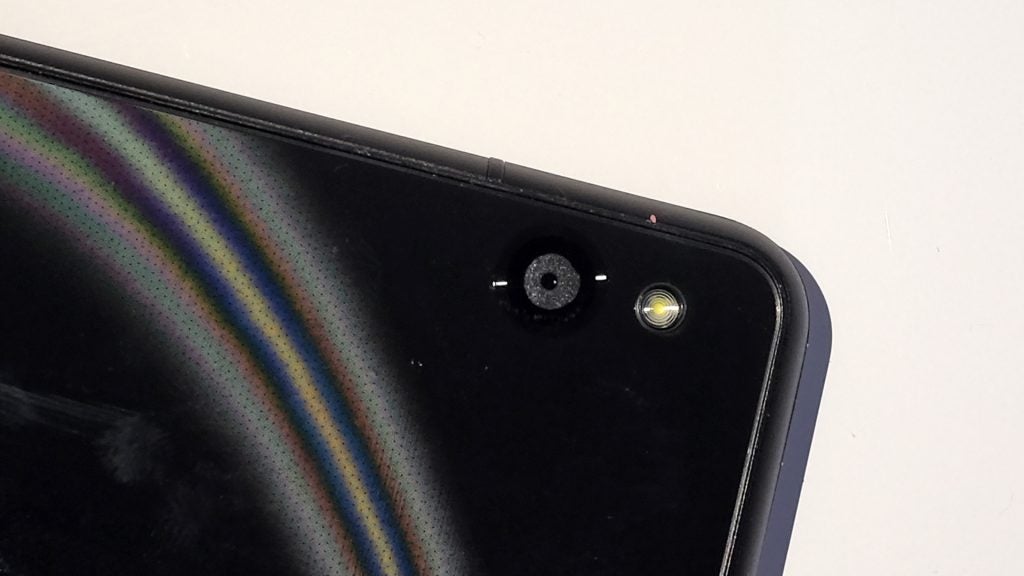 Why buy the Lenovo Tab P10?

The Lenovo Tab P10 on its own isn’t the perfect alternative to an iPad. It’s less powerful and feels a little slower throughout.

However, it’s a solid alternative to the Amazon Kindle Fire HD 10. It sounds better than that tablet with the Show Mode charging dock and has a much snazzier glass and metal build. Most importantly, though, it has more conventional software – not the overbearing ad-fest that is Amazon’s Fire OS.

In a vibrant and dynamic tablet market, the Lenovo Tab P10 wouldn’t necessarily seem that appealing. Its speaker dock audio is solid rather than brilliant, and it could do with a little more power. However, this is one of your best options at the price, switching between its identities as a tablet and smart display surprisingly well.

A tablet and smart speaker with display in one, Lenovo has managed to inject more life into the tablet concept.