With its portrait mode, more impressive audio and larger screen, the Lenovo Smart Display 10" offers something different to the Google Home Hub, but the design could be a little nicer.

What is the Lenovo Smart Display 10”?

Announced way back in January 2018, the Lenovo Smart Display 10” was the first Google Assistant-powered smart display. Before Lenovo could release the product, the Google Home Hub came along and grabbed a lot of the attention.

Fortunately, rather than being a sub-Google product, the Lenovo Smart Display 10” gives you the same features as in the Home Hub, but adds a larger screen, portrait mode and a webcam. It’s available with an 8-inch or a 10-inch screen, and I’ve got the larger model on review here.

The thing about smart displays and smart speakers is that you have to have them out on display for them to be useful. For that reason, it’s important that they look good. Google managed this with the Home Hub’s sleek material finish and ‘floating’ screen.

With the 10-inch model, Lenovo has gone with a bamboo rear plate, to add a bit of design flourish. From the rear, it looks quite different. But the problem is that the Lenovo Smart Display 10” tends to sit on a counter where you see it straight on. 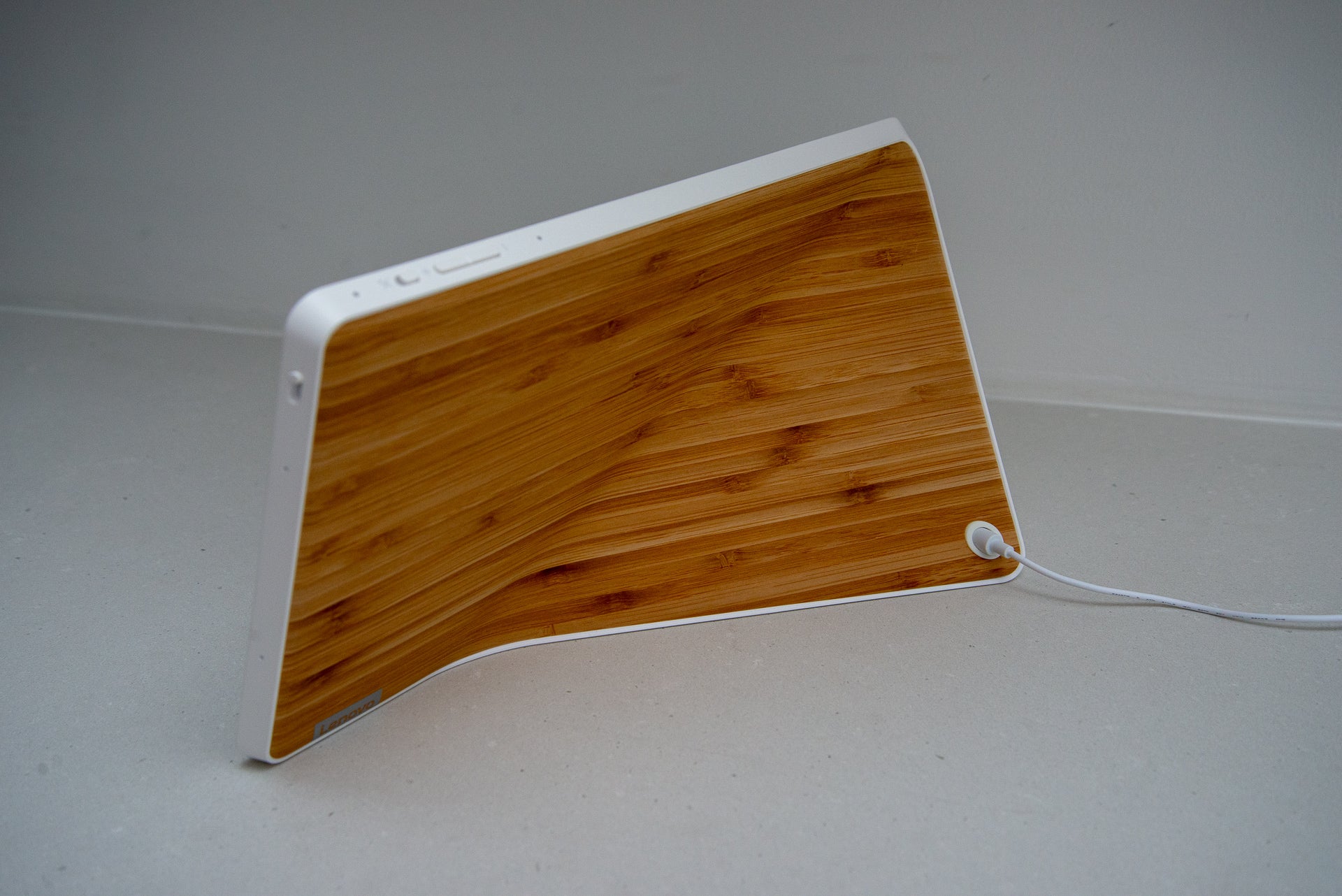 Head-on, the Smart Display looks like a tablet with a speaker bar to the side, finished in white plastic. It’s by no means horrible, but it lacks some of the flair of the Home Hub.

The stand has a clever feature: you can put the screen into portrait mode, which makes it better for video calling with Google Duo. A 5-megapixel camera sits in the screen’s bezel. However, the display’s operating system only works in portrait mode for video calls and nothing else. 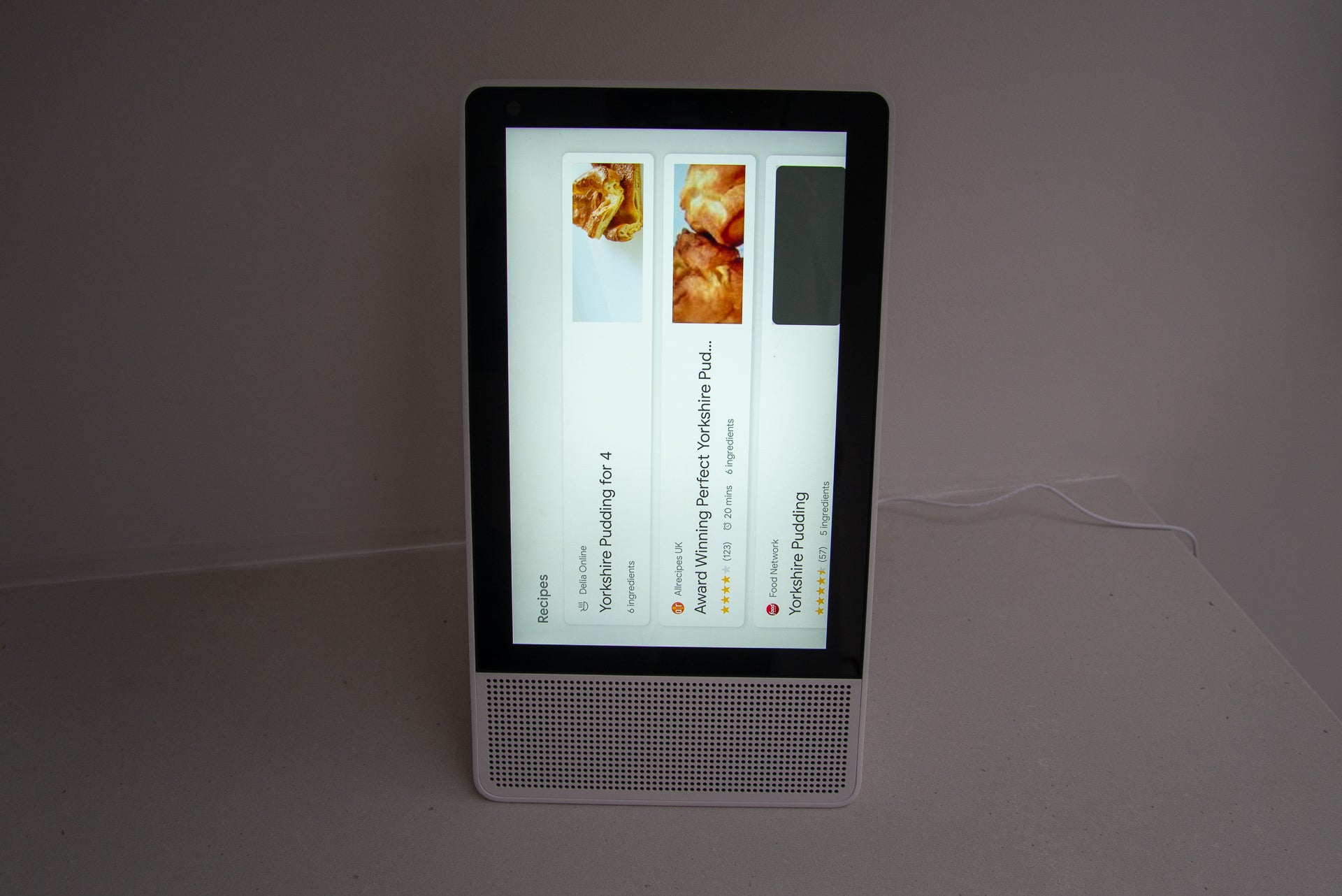 Google didn’t put a camera in its smart display, citing that it wanted to boost privacy. Lenovo gets around that problem with a slider that turns off the webcam and moves a physical shutter to block the camera. 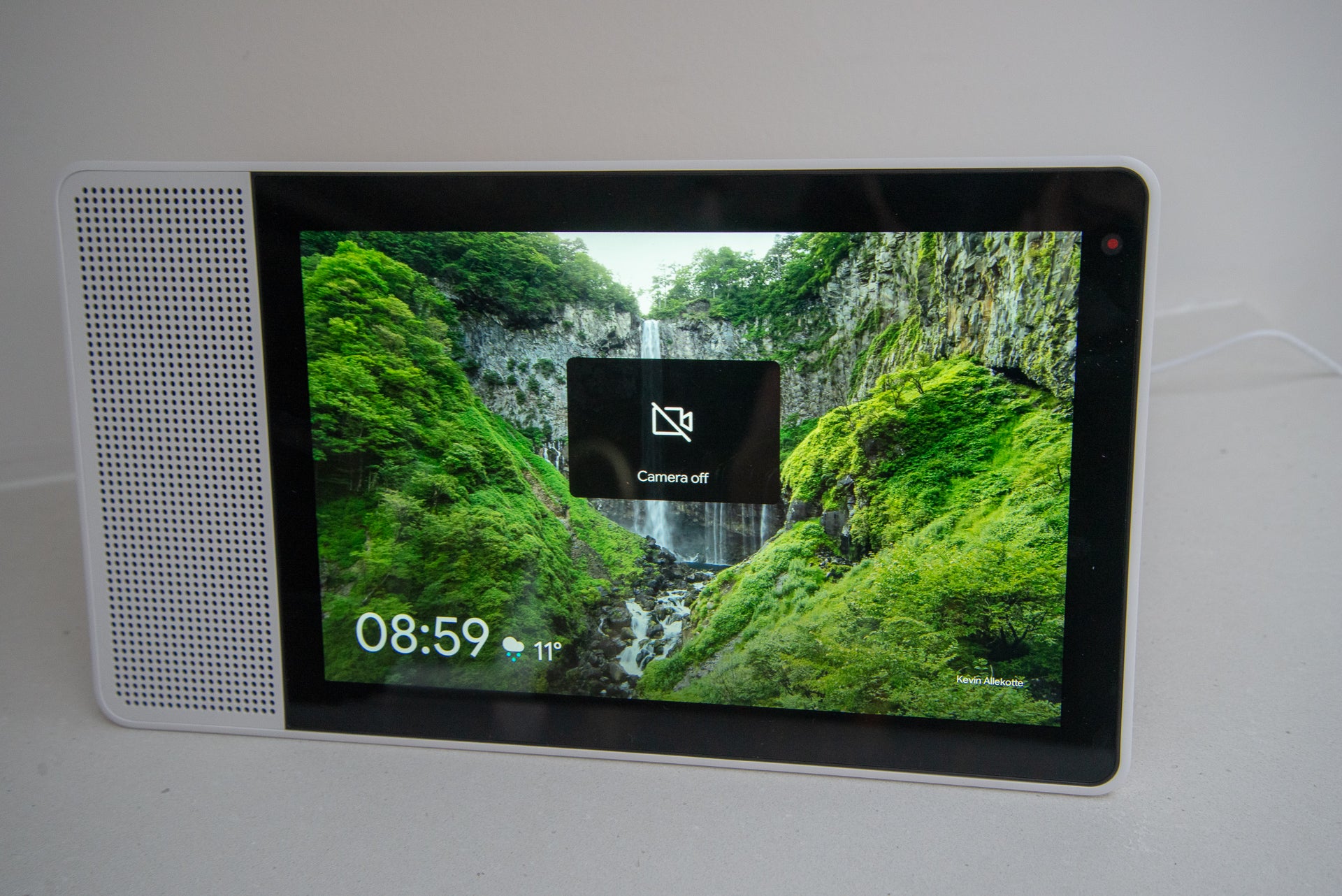 2 x 2 microphone arrays are built into the smart display, letting it listen out for your voice commands. A mic mute button turns the microphones off for when you don’t want Google to interrupt you. There are also volume controls, although you can swipe up from the bottom of the screen and use the touch controls instead (or just use your voice). 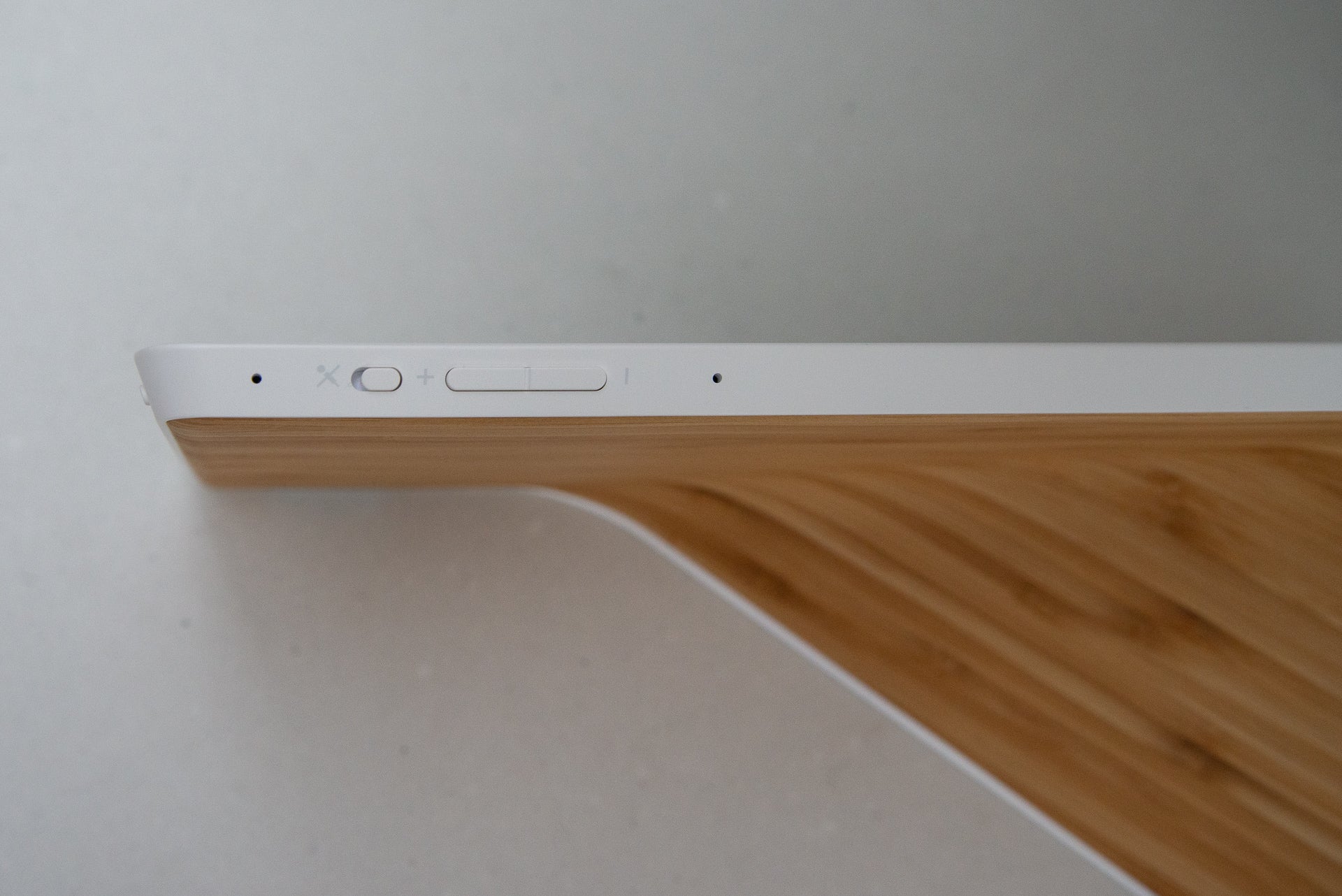 The microphones generally did a good job picking up my voice, although it didn’t always respond from the other side of the kitchen and I occasionally had to move closer or raise my voice.

The Lenovo Smart Display 10” runs Google Assistant and the same operating system as the Home Hub. Google doesn’t limit features for third-party products, so you don’t miss out on any features by buying Lenovo’s product rather than Google’s.

I’ve covered the features available in more detail in my Google Assistant Guide, but here I will look at the more general information on the Smart Display.

First, it has to be said what a good job Google has done by adding a screen in. Ask Google for some information on the football scores, for example, and you get the current table formatted for the screen. Ask for the weather, and you get a list of all of the latest weather information as well. The combination of voice and screen is a winning one, giving you more information that’s easier to take in. 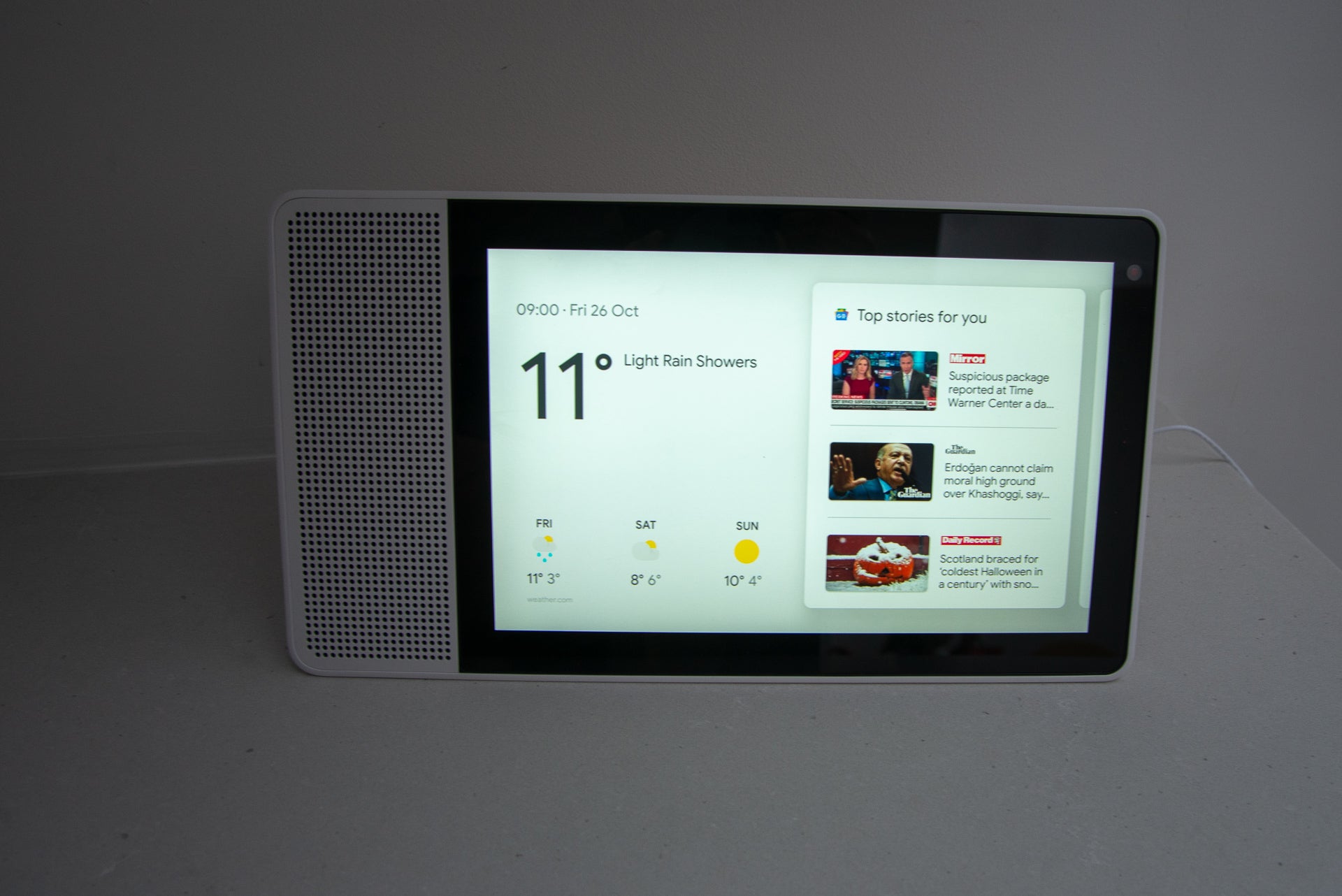 Google’s also very, very powerful when it comes to asking for directions, using Google Maps to show you the route on-screen. Directions are also sent to your phone.

As the Smart Display is powered by Google, it generally responds with more accurate information than, say, Amazon Alexa devices. Ask for local businesses, the answer to simple questions and the like, and the Smart Display comes through with the goods.

The Smart Display can also connect to your Google Account, pull out calendar information and show you your photos. Well, that’s if you don’t have a paid-for G Suite account. If you do, then the Google Assistant refuses to work, still.

YouTube is built in, so you can watch clips on the 10-inch screen, and the Smart Display provides scrubbing controls to manage playback. You can cast video content from your phone, but only for YouTube. The Smart Display is not a full Chromecast device, so you can’t send Netflix shows to it, which feels like a missed opportunity. The rival Echo Show lets you play Amazon Prime Video content.

You can play music using Spotify, Deezer, Google Play Music or YouTube Music, with the screen even showing you suggested music. Multiple speakers can be grouped, but if you want to play different tracks on different smart speakers, you’ll need a YouTube Music Family account. 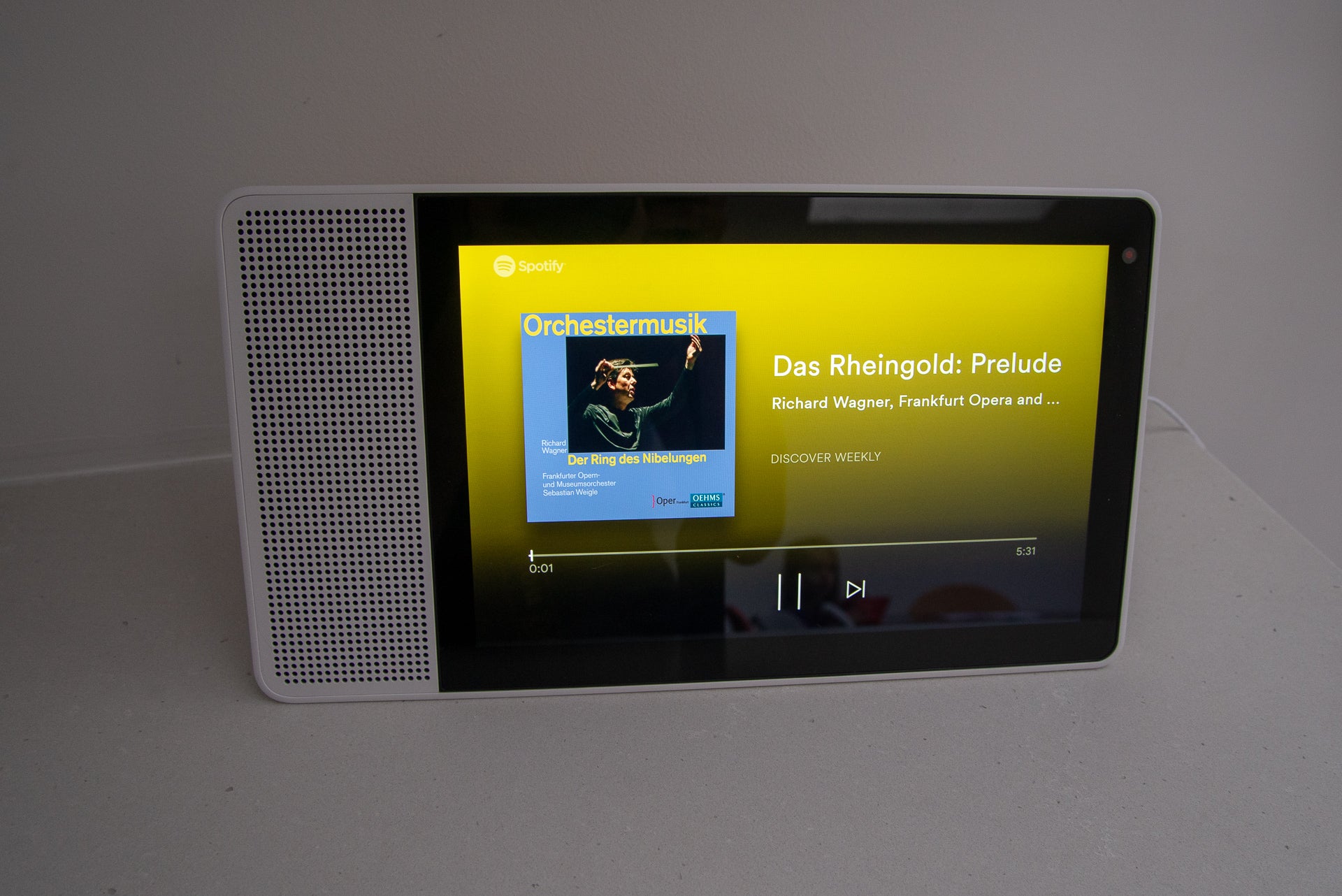 It’s nice to see recipes, with Google returning a sensible list of matches. Some results are US-focussed, which means a confusing mix of odd measurements – it would be better if the results were filtered by UK results first.

Voice calls are built in, with the Smart Display able to call UK numbers for free. Google Duo calls are available now, both audio and video. But there’s a fairly confusing setup routine that has to take place first in the home app.

Related: How to make hands-free calls with Google Home

Google has massively overhauled the smart home side of Google Assistant. From the Lenovo Smart Display 10″, you can use Home View to control your devices. You can control light groups by room, turning them on or off, or changing colour where supported, such as with Philips Hue. 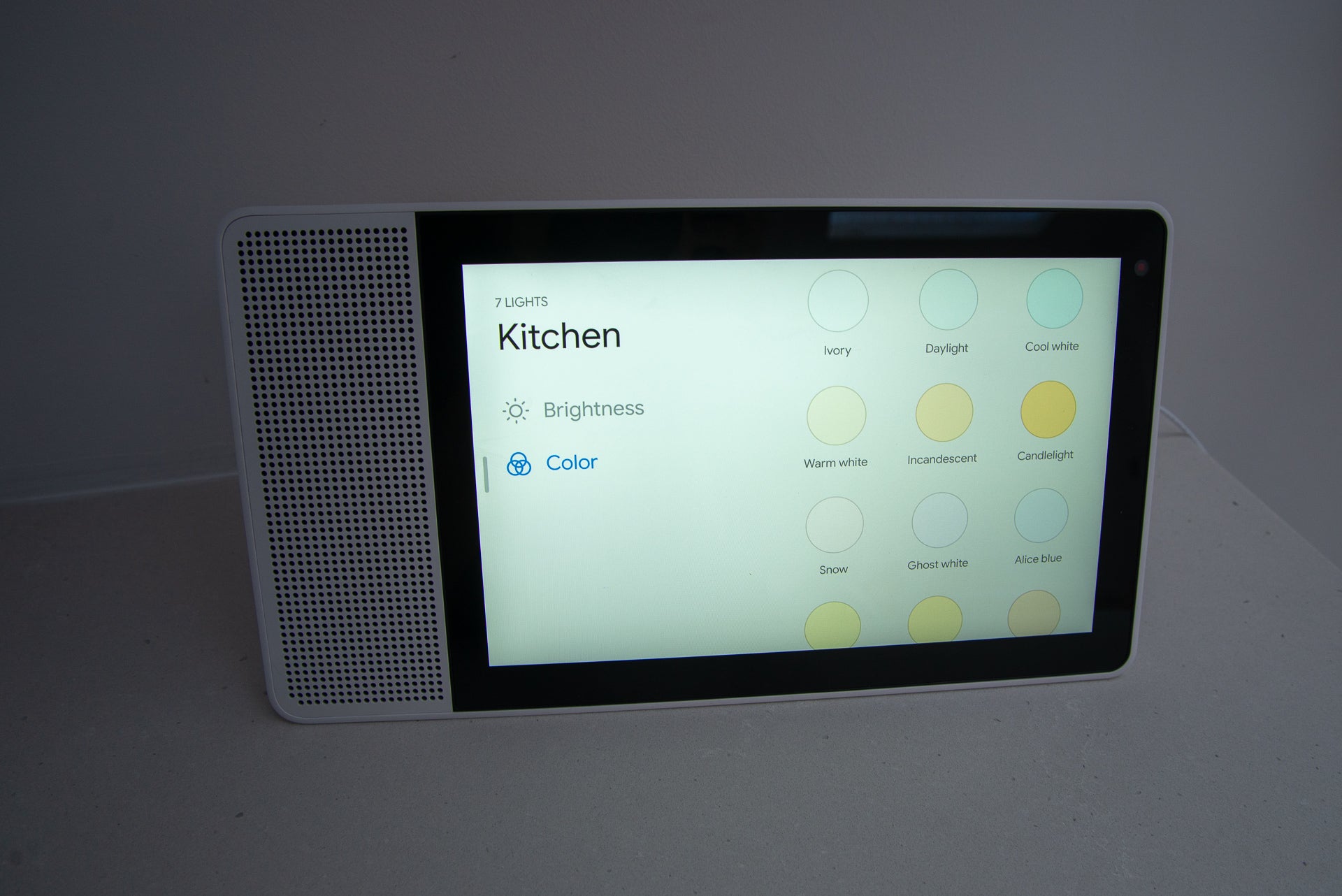 Thermostats can be controlled, too, both for changing the temperature and, where supported – such as with the Nest Learning Thermostat – changing the heating mode, too. 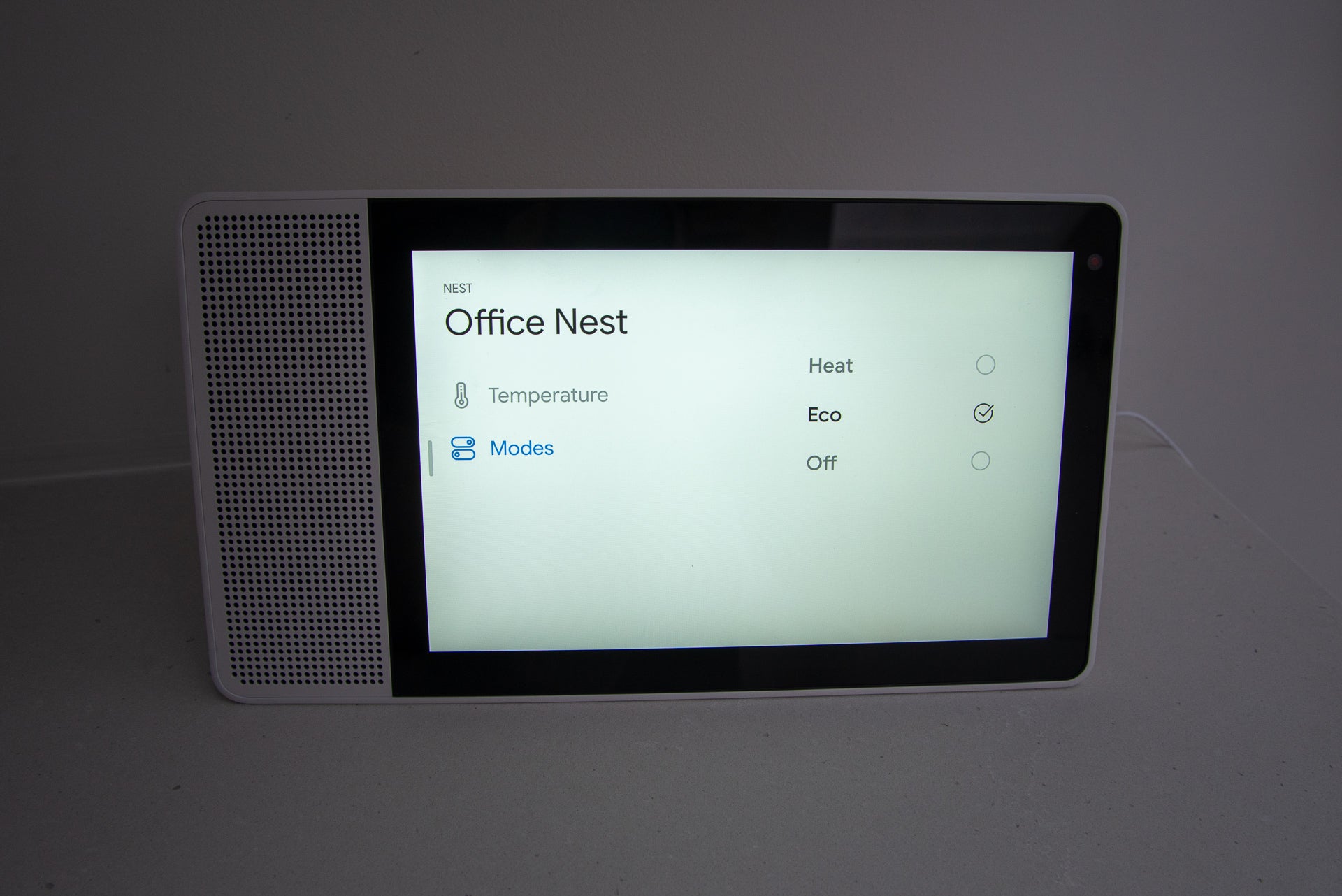 You can also view the feeds from cameras. If you have a Nest Hello, you automatically get a view from the feed, so you can see who’s at the door. It’s a shame that there’s still no way of answering the door, although that update should be coming soon.

Home View is now part of the Google Home app too, so you can have touch control from there. Currently, there’s no option for changing light colour, which is a little odd. 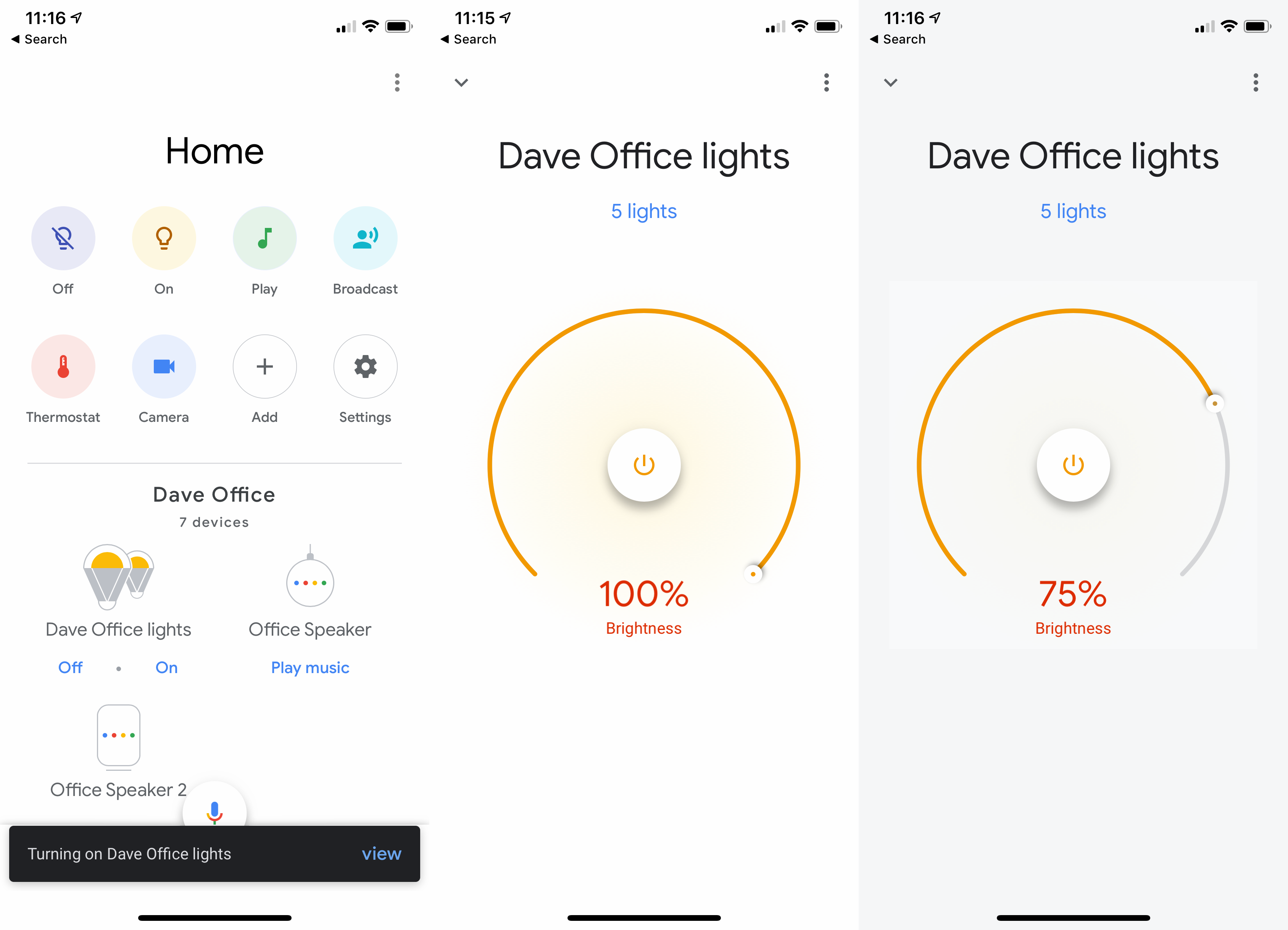 Custom routines are now available, so you can control multiple devices, get a news update and more, all with a single voice command.

While the Google Home was a little weedy, the Lenovo Smart Display 10″ ups the ante in the sound stakes. There’s a bit of bass to give songs that extra presence and the smart speaker goes surprisingly loud – certainly enough to fill my kitchen.

Quality isn’t perfect, and we’re more in the mid-range Bluetooth speaker territory here, with a lack of detail and a slightly harsh high-end coming in. But for watching YouTube, listening to radio, getting voice replies and the occasional bit of music, the Lenovo Smart Display does a good job.

Lenovo has a history of producing quality displays, so it’s good to see the company continue the trend here. A bright screen that’s not overly reflective makes it easy to see information from any angle. For the intended purpose of on-screen information to complement voice replies, it’s an excellent screen and a bit easier to read than the tiny display on the Home Hub.

It’s great for YouTube, too, and the Full HD screen would be perfect for catching up on Netflix if only the display supported it.

For video calls, the screen’s great in portrait mode, providing a more natural way to talk to someone on the other end of the line. 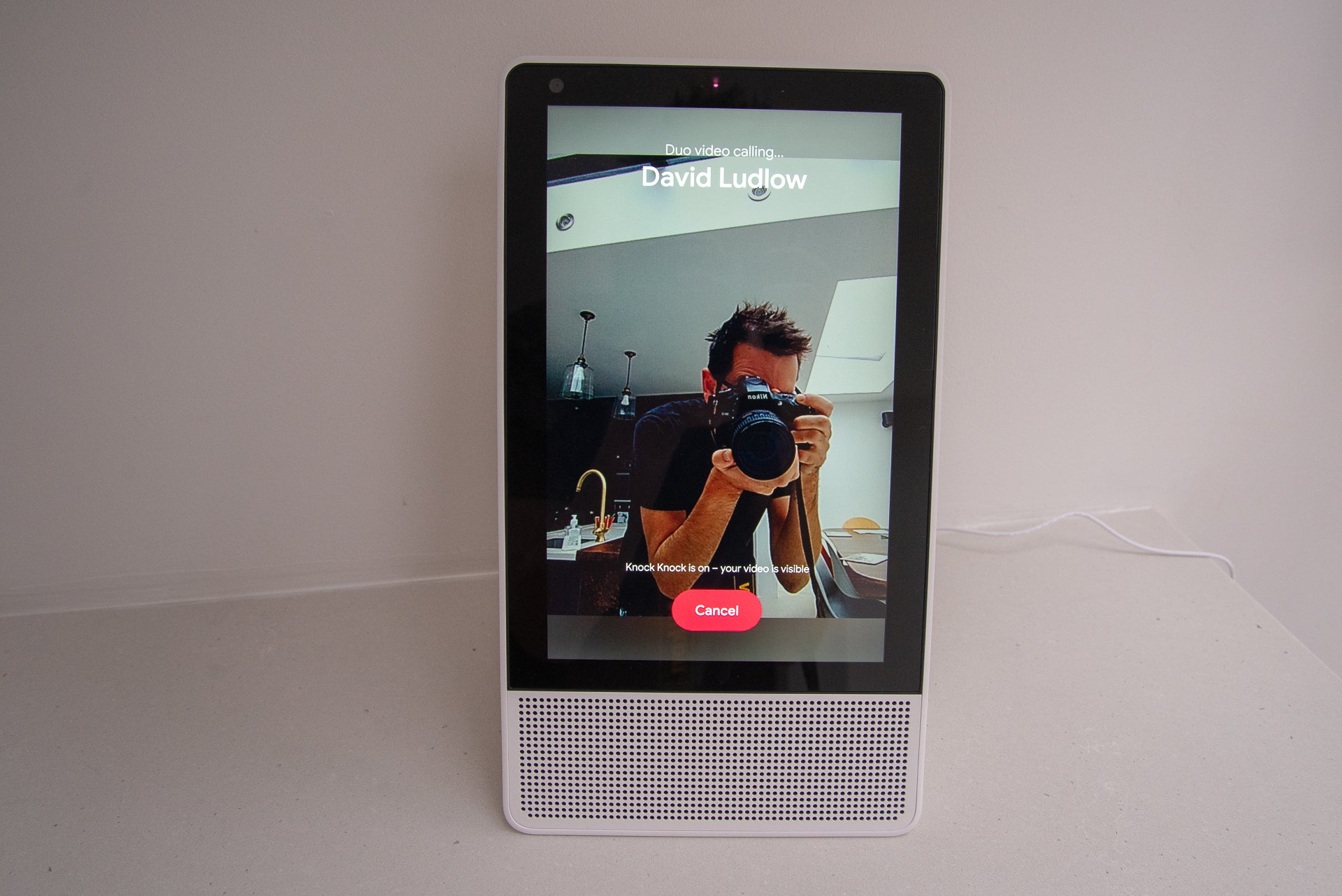 Why buy the Lenovo Smart Display 10”?

The larger screen, integrated webcam and better audio make the Lenovo Smart Display 10″ a great choice of smart display if you want something to make a bit more of an impact. The interface, range of features and smart home control are all top-notch, but it would be nice if Netflix was supported.

If you’re after something a bit smaller and a little more attractive (not to mention cheaper), the Google Home Hub is hard to beat, although it’s better suited to smart assistant duties as it’s audio prowess isn’t particularly good.

Then, there’s the Amazon Echo Show (2nd Gen) for anyone that wants a different voice assistant and a device that’s built as much for media as it is for voice control.