There are several aspects to the image quality of VR headsets. Resolution, any associated screen-door effect, motion blur, field of view and lens quality all matter.

The Lenovo Mirage Solo performs well in most of these categories. It uses a 5.5-inch 2560 x 1440-pixel LCD panel. This is actually a higher resolution than either the original HTC Vive or Oculus Rift.

I have issues with the resolution of all VR headsets. You can always see the pixels, and it’s the same with the Mirage Solo. However, sharpness is good enough to make game worlds immersive and films enjoyable. As long as you’re not too picky about visual clarity, that is. Screen-door effect, where you can see the black space between pixels, is minimal too. 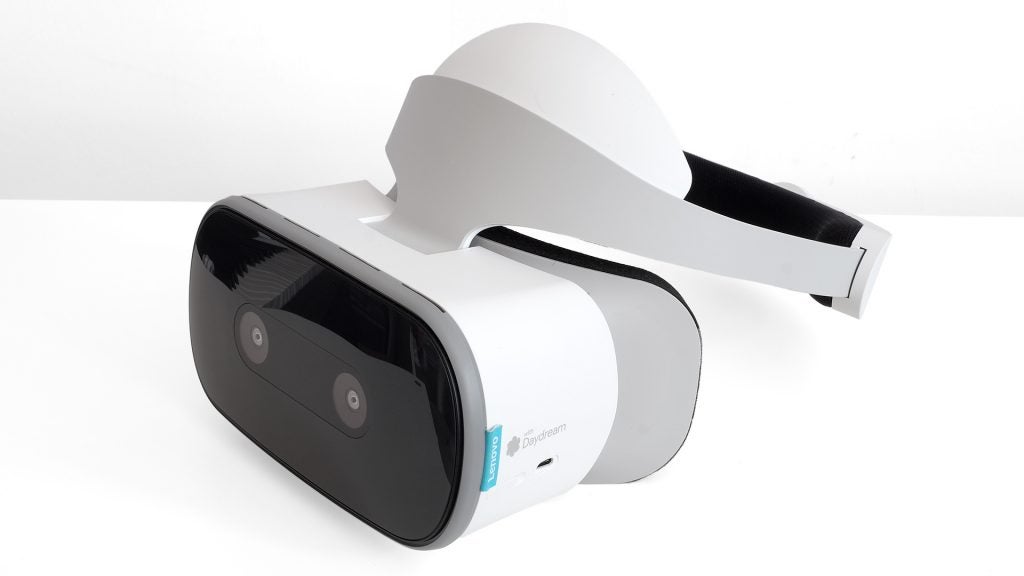 I’m also impressed by the lack of motion blur. The best early VR headsets all used OLED panels because they have much faster-reacting pixels, but the Lenovo Mirage Solo has a fast-ish 75Hz refresh rate panel. Some people are more sensitive to motion blur than others, but I haven’t noticed it here. This is excellent news, since it’s blur that can cause motion sickness.

There is a visual effect mentioned earlier that can appear like motion blur, however. The Lenovo Mirage Solo’s lenses smear the image at the edges, causing chromatic aberration and purple fringing. Only a relatively small area at the centre is perfectly sharp. High-contrast white text on a black background starts to blur at just 15-20 degrees off-centre. 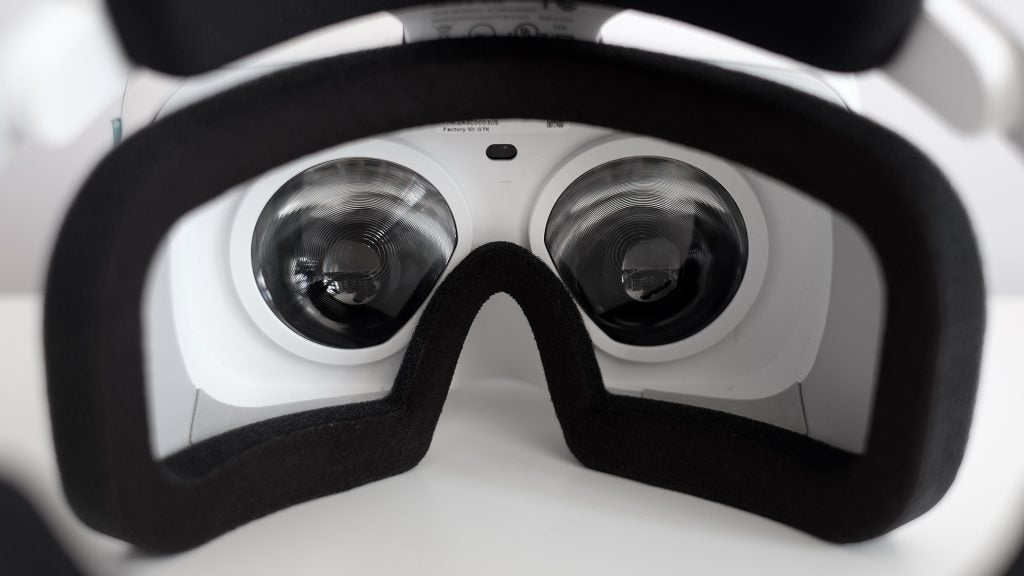 You can see the fresnel lens pattern here

This isn’t such a big deal in games where you move your head instead of your eyes, but it isn’t great for movies. Who moves their head to look at action going on at the edge of the frame in the cinema?

Field of view is good, however. This determines how much of your vision is taken up by the VR image. Here you get 110 degrees, matching the HTC Vive, and up from 90 degrees in the Oculus Go and 101 degrees in the latest Samsung Gear VR.

Some “porthole” effect is visible, where the extreme edges of your vision are blocked off, but I find the image wide enough to let you get lost in a VR experience.

After a few hours I started to notice the black level isn’t close to that of an OLED headset, but this only serves as a reminder that VR headsets such as this are still quite young. It doesn’t ruin the experience.

Google Daydream VR has been around for a while, but the Lenovo Mirage Solo is a launch device for WorldSense, which makes use of the headset’s additional positional sensing.

Right now, there are around 60 WorldSense apps and games, some of which were existing Daydream titles now upgraded with extra freedom of movement. Extreme Downhill, for example, is a cartoony snowboarding game, where the extra movement tracking is used to let you duck down under barriers as you slalom down a mountainside, collecting coins. 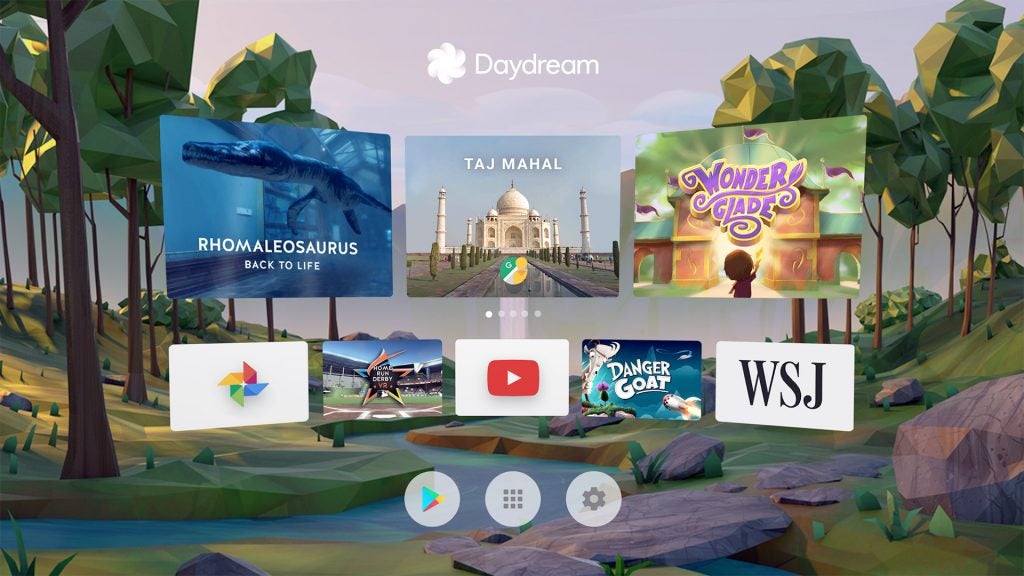 This is the interface you see when using the Mirage Solo

The most famous Daydream VR games are probably the racer, Need for Speed: No Limits, and Hungry Shark VR, which sees you play as a shark, swimming through the sea, eating stuff. In titles that don’t support extra movement tracking, vertical movement won’t actually be tracked.

Other high-profile titles to check out include Ultrawings (£8.99), Toy Clash (£4.79) and Lola and the Giant (£8.49). It’s probably worth visiting the WorldSense library to see if anything appeals, before buying a Lenovo Mirage Solo.

You can also watch Netflix, YouTube and Google Play Movie content through the headset. These put a big cinema-style screen in front of your face. Resolution is far from perfect – it looks around 480p quality. However, there’s still a thrill to maxing-out the view window then sitting down in front of it like a kid who’s booked out their own cinema. The screen appears epic. 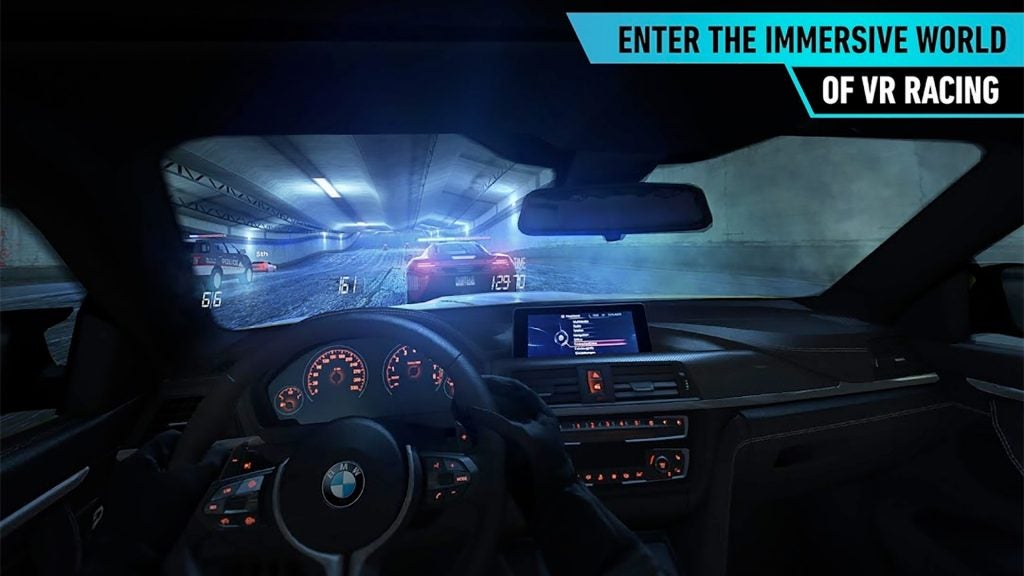 WorldSense and Daydream don’t yet feature any games that would make me want to go out and buy a Lenovo Mirage Solo instantly, however. There’s no Skyrim VR or Resident Evil 7. The titles are more mobile games you might otherwise play on your phone.

However, many of the apps and games on offer are fun and interesting, a good fit for the shorter kind of play sessions most people want from VR. Nevertheless, you still get a higher-grade of experience with an HTC Vive.

WorldSense is fairly new, and the apps and developers of this ecosystem are those of the mobile rather than console space, and since the Lenovo Mirage Solo uses mobile phone-style hardware, the experience with the HTC Vive is markedly better.

The Lenovo Mirage Solo has a Snapdragon 835 processor, one of the most powerful phone processors of 2017. 2018 phones have the newer Snapdragon 845. It seems likely either the headset was designed before this chipset was available or that adding it would have pushed the cost up further.

This runs most of the available VR experiences extremely well, with frame rates high enough to avoid the kind of judder that can make you feel sick or disorientated.

You get 64GB storage for your apps and games, plus a microSD slot on the side to add more space. 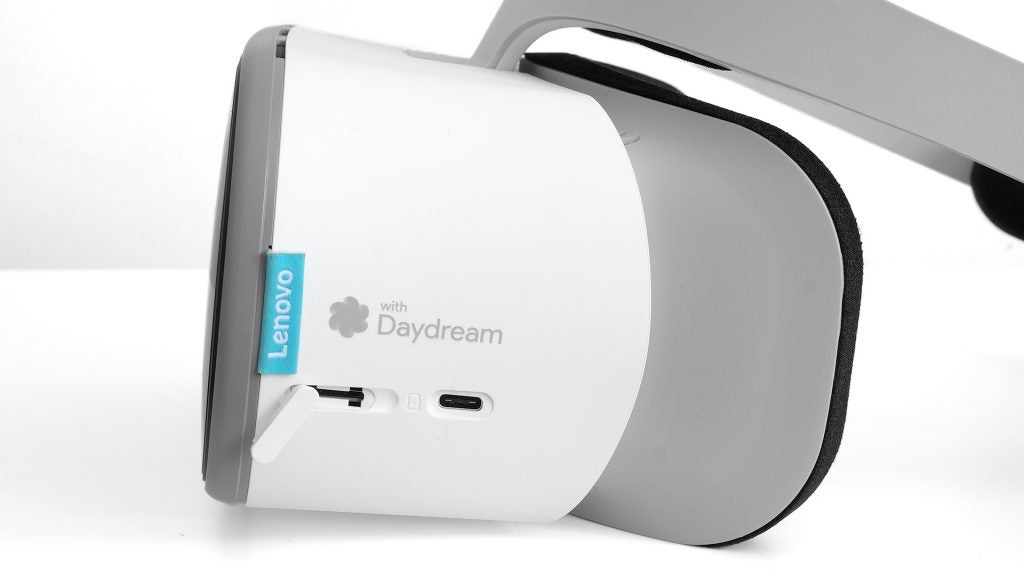 There are no speakers built into the Lenovo Mirage Solo, unlike the Oculus Go. You can plug earphones into the 3.5mm jack on the side, however. 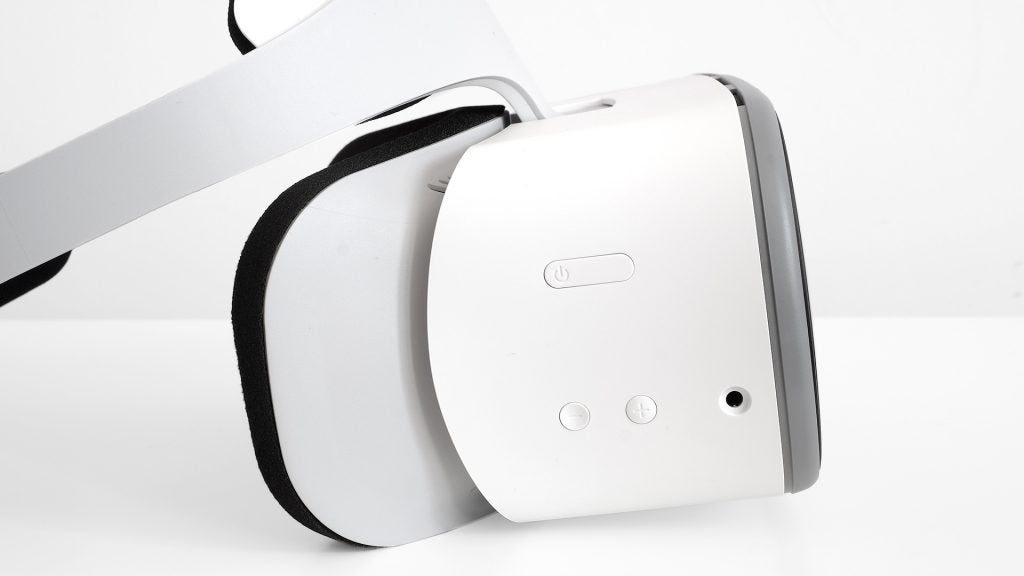 The battery lasts for around three hours – or less, if you use a GPU-taxing game rather than mostly VR video or 360-degree image apps. This may not sound like much, but it’s actually decent. I’ve used the Lenovo Mirage Solo for 20-minute sessions here and there. Thanks to the auto-standby function, it’s lasted a week.

You can dip in and out of using it much more simply than an Oculus Rift or any headset that requires a phone.

Why buy the Lenovo Mirage Solo?

The Lenovo Mirage Solo is the most interesting standalone VR headset to date. It’s a pretty compelling vision of VR’s future. There’s no fiddling around with cables, plus the headset turns on when you need it to, and goes to sleep as soon as you take it off.

It could be more comfortable; the lenses could certainly be better. In addition, while a 6DOF standalone controller poses some technical conundrums, the Lenovo Mirage Solo could do with one.

The main reasons to hold back purchasing this headset lie elsewhere, though. While the Mirage Solo has the tech of a phone that might actually cost more than £399, this feels quite a lot to spend on a casual VR setup.

On the portable side, the Oculus Go is the obvious comparison. It’s half the price and, while its positional tracking is only half as good, it’s a bit early to tell whether WorldSense’s 6DOF apps are worth spending £200 on.

The PSVR also warrants a look. Yes, it’s a cabled headset and it requires a PS4 to work. Iits images appear significantly less sharp, too. However, it has far more AAA-style VR experiences and, nowadays, it’s possible to pick up a PSVR and a PS4 for not much more cash. And then, you’d also have a great console and media player for when you’re not using a headset.

Full freedom of movement in a portable headset is a major step forward, but the price is off-putting unless you love the look of many WorldSense titles.