What is the Lenovo Mirage Camera?

The Lenovo Mirage Camera is a 3D VR camera. It’s a companion piece to the Mirage Solo headset – the first Google WorldSense VR device. WorldSense lets you wander around 3D worlds, to a limited extent, rather than just looking at them.

Just like that headset, the £279 Mirage Camera is a trailblazer. And, as is usual in the gadget world, this means it won’t be for everyone.

With it you can record 3D video for a VR headset – and that’s neat. However, image quality is just okay, there’s no screen to aid composition, and its stabilisation could be better. It’s great for photos, but VR highlights the limitations of its video. 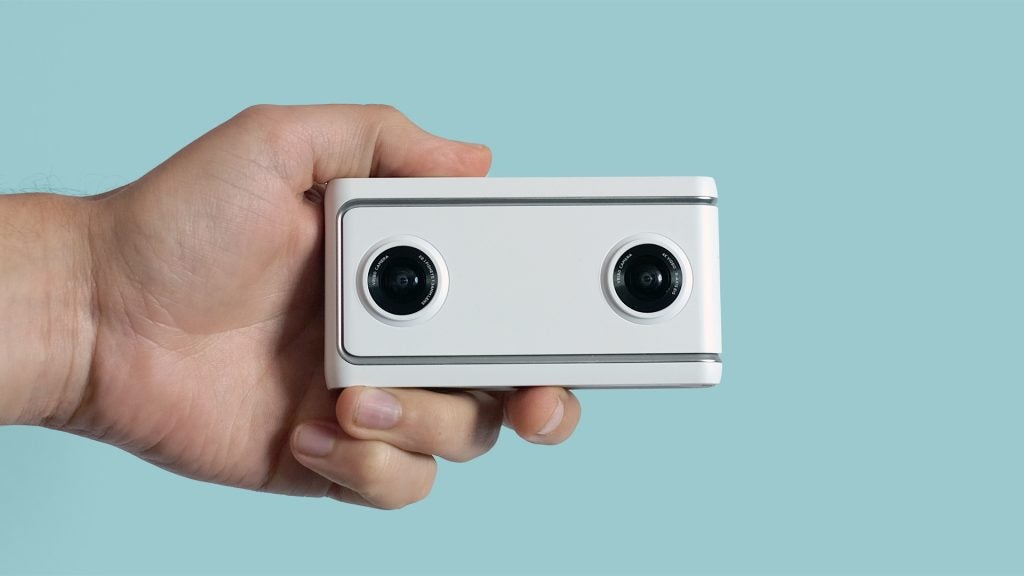 The Lenovo Mirage Camera isn’t a normal camera. However, it looks closer to one than the Samsung Gear 360 you might buy for another kind of “next gen” action-cam footage.

It sports two lenses on the front, rather than one, which it uses to create 3D footage. Just like our eyes, the difference between the views of the two sensors is used to “see” in three dimensions.

The Lenovo Mirage Camera seems fairly practical in a rather no-frills way. You can slip it into a jeans pocket, it’s light, and you get two batteries in the box rather than one. Like a standalone camera, you can swap out the cells pretty quickly. The phone-like battery lives behind a thin plastic cover on the device’s rear. Each unit lasts around two hours. 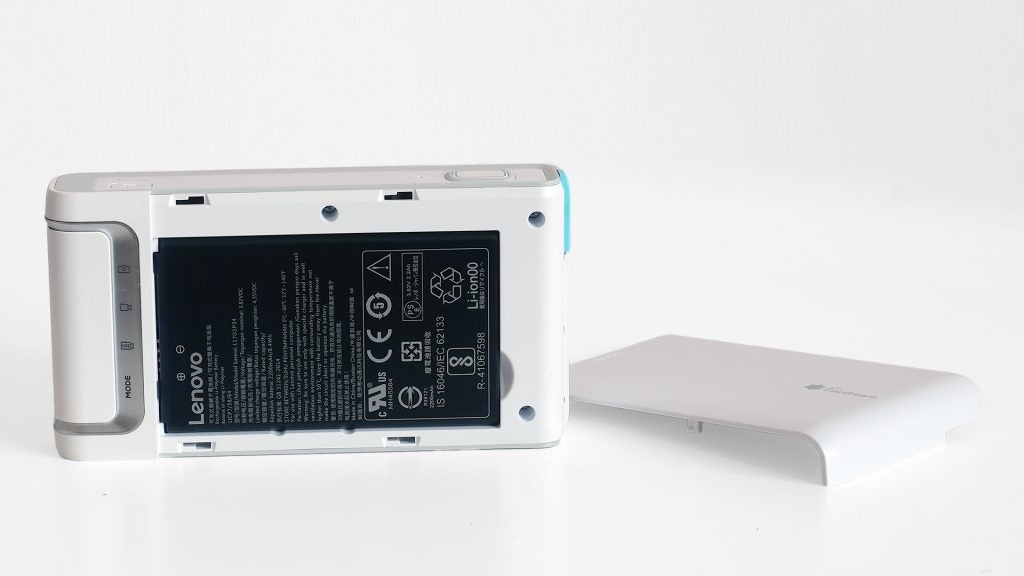 Also like a phone, you charge the battery using a USB-C port located on the camera’s side. Again, this sits beneath a plastic flap.

The Lenovo Mirage Camera feels like an early device in use, a prototype with a few finishing touches added before being put into production. Some of the seams in its plastic plates are rough and inconsistent, the flaps feel cheap and flimsy, and the silver plastic highlights look tacky. If you can’t pull off a good impersonation of aluminium or use the real thing, we’d be inclined not to bother.

The Lenovo Mirage Camera’s build quality is more akin to a device costing £70, but since this is advanced tech you pay a premium. 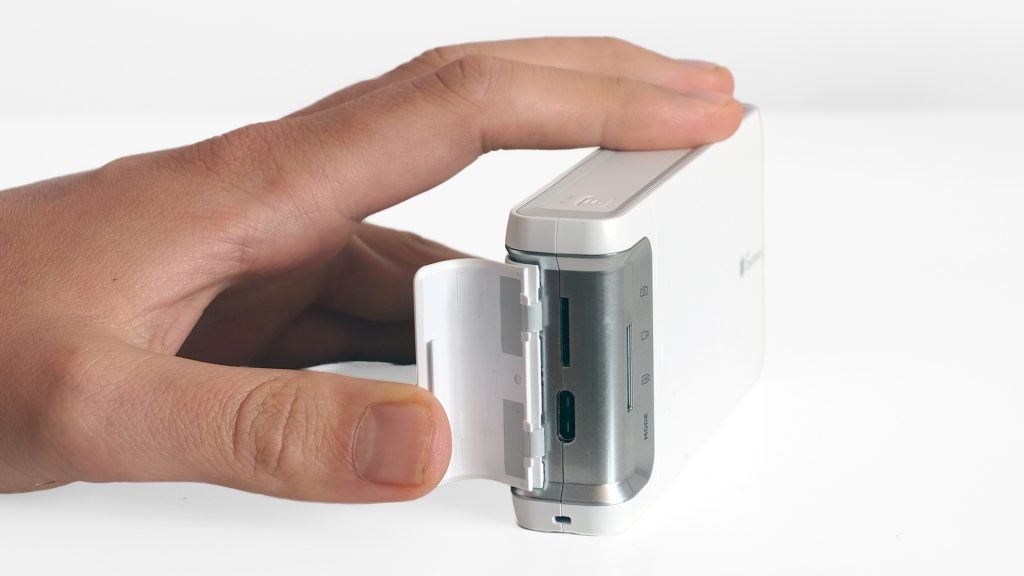 Note that there’s no carry bag in the box, which is a shame given that the two fisheye lenses do protrude and are therefore fairly susceptible to scratches and dust-gathering.

There are some practical points that need to be improved in future Daydream cameras, too. First, there’s no rear display on the Lenovo Mirage Camera. While I’m not particularly surprised by this, it’s likely that its addition would push up the price of the device.

As a result, composing shots will naturally prove a bit trickier, but you’ll get used to it.

Instead of a display, little LEDs sit behind the shutter button and the mode icons on the rear to tell you whether you’re about to shoot a still or video, and if the Lenovo Mirage Camera is on or not. They’re not bright enough, however. I had to cup a hand over these LEDs just to see which was lit while shooting on a bright day. 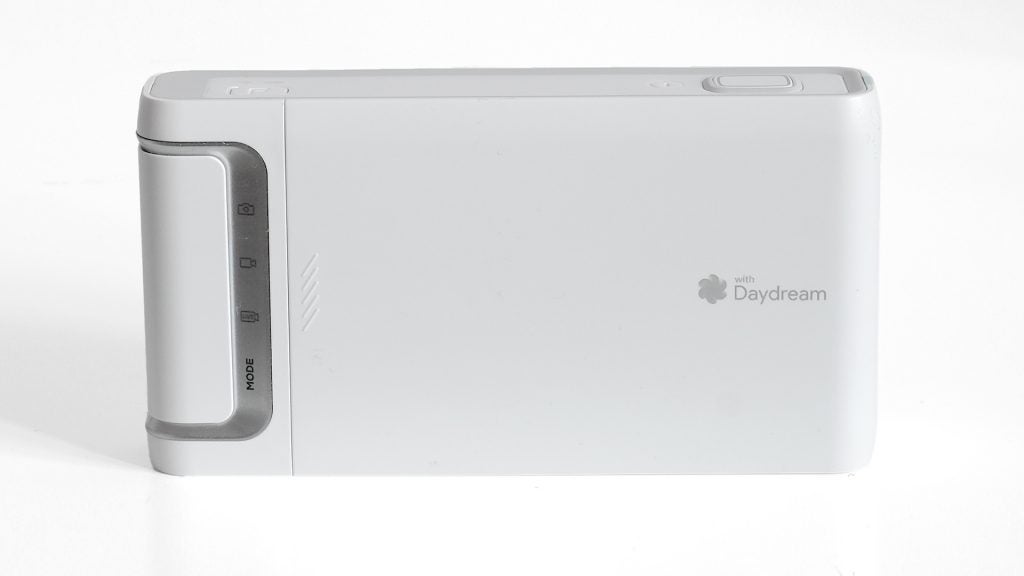 There’s also a speaker on the device’s underside, however, which emits bleeps, bloops and shutter sounds to signpost when you shoot a video or stop/start video capture. Again, nothing sounds quite as tacky as a camera shutter noise played through a tiny driver, but these sounds are useful for letting you know that the camera is working. Note that these shutter sounds can be switched off if they become too grating.

There are just three buttons on the Lenovo Mirage Camera: shutter, mode and power. There’s no focusing to be done on a VR camera such as this, so it couldn’t be much simpler.

For the first few minutes at least, you’ll probably accidentally leave a finger in the shot, mind. Although the Lenovo Mirage looks a little like a standard camera, you’ll have to hold it by its top and sides to keep your fingers away from the 180-degree fisheye lenses.

Since there’s no display, it will be difficult to gauge from the device alone the remaining storage or battery; you’ll have to hook up the Lenovo Mirage Camera to a phone app for this. The app isn’t a Lenovo one, but Google’s VR180. 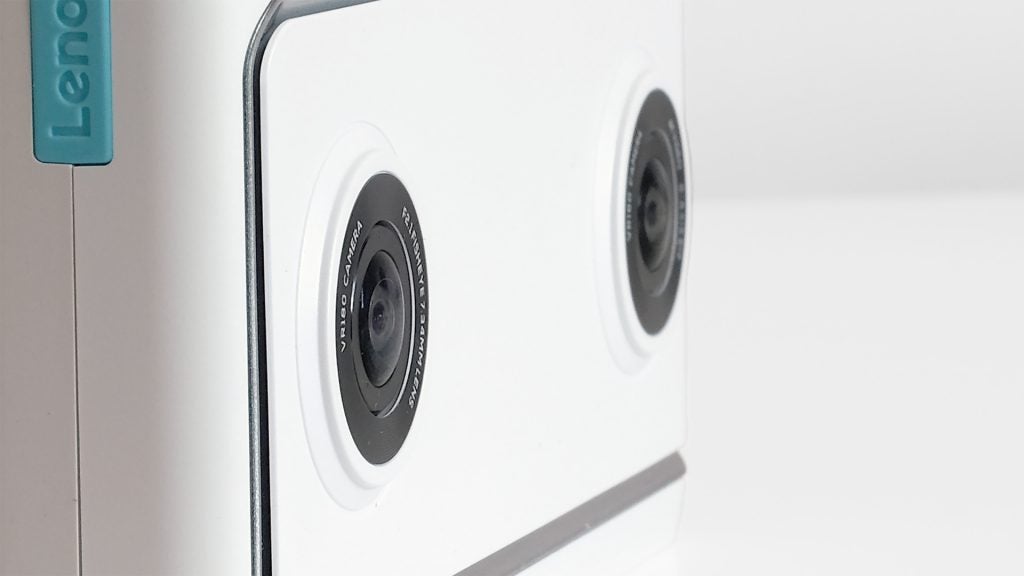 Using VR180 you can review your footage, change a few camera settings and update the firmware. You can use it to control the camera and see a “live view” of its footage too. There’s just 0.5 seconds of display lag, although the feed image is so stripped-back it’s only useful for checking the basics of what’s in the scene, not close-up focus.

The Lenovo Mirage Camera uses Wi-Fi for this connection, and you can use it anywhere, making it the best way to frame your shot. There’s a tripod thread on the bottom of the camera, too. This isn’t just a point ’n’ shoot VR toy, even if it seems like one in some respects. 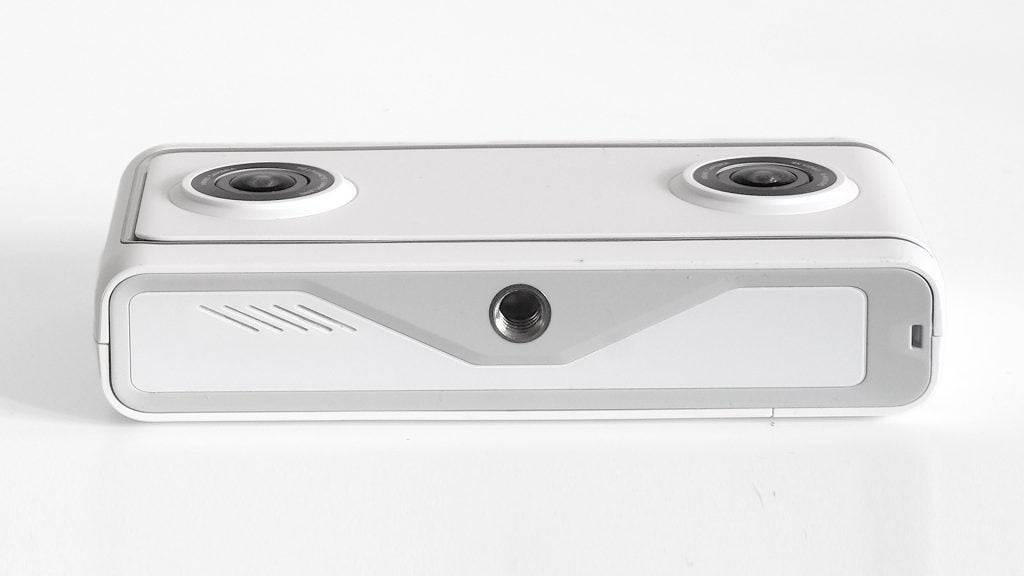 While the idea of ordinary folk live-streaming 3D VR content seems pretty niche right now, the Lenovo Mirage Camera can handle that as well. You’ll need a good Wi-Fi connection, however. This camera won’t be much use at the beach unless you have a pretty fast 4G dongle (or tethered mobile connection) available.

The Lenovo Mirage Camera stores pictures and footage on its 16GB internal storage. You can also add a microSD card; there’s a slot by the USB-C power socket.

The hardware inside is surprisingly powerful. This camera has an octa-core Snapdragon 626 CPU – the kind found in a higher-end entry-level phone. It might seem a waste, but this is likely the sort of power required to build VR180 video on the fly from the two sensor feeds. 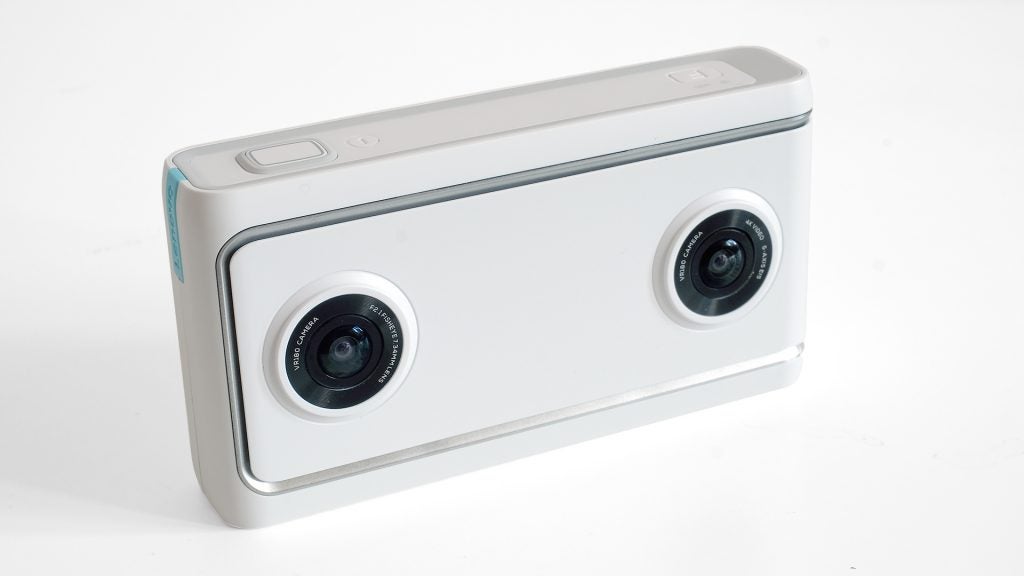 Both cameras on the Lenovo Mirage’s front have 13-megapixel sensors and f/2.1 180-degree fisheye lenses. This captures footage more-or-less straight up/down from the front, which is the reason you have to make sure to keep your fingers out of the way.

You have three good choices when capturing images. There’s 1440p video, which uses 6-axis stabilisation to make footage less juddery when walking around. Higher-resolution 4K capture is available, but this doesn’t appear to use stabilisation.

This is because it’s EIS, not OIS: electronic/software-based rather than optical. In its most powerful form it can make handheld footage look like steadicam video, but since it uses a redundant border “buffer” to smooth our movement, its resolution needs to be significantly lower than “native”. And this is one reason it doesn’t work at a 4K resolution.

Stability isn’t ideal at the highest resolution, and stabilised 1440p capture isn’t great for VR either. While you might think that VR headsets are relatively low-res, remember that 4K/1440p is stretched over 180 degrees, not just the view you see with a VR headset at any one position.

Another issue is that the Lenovo Mirage Camera captures video at only 30fps, not the smoother 60fps or the 75fps that the Mirage headset can handle. 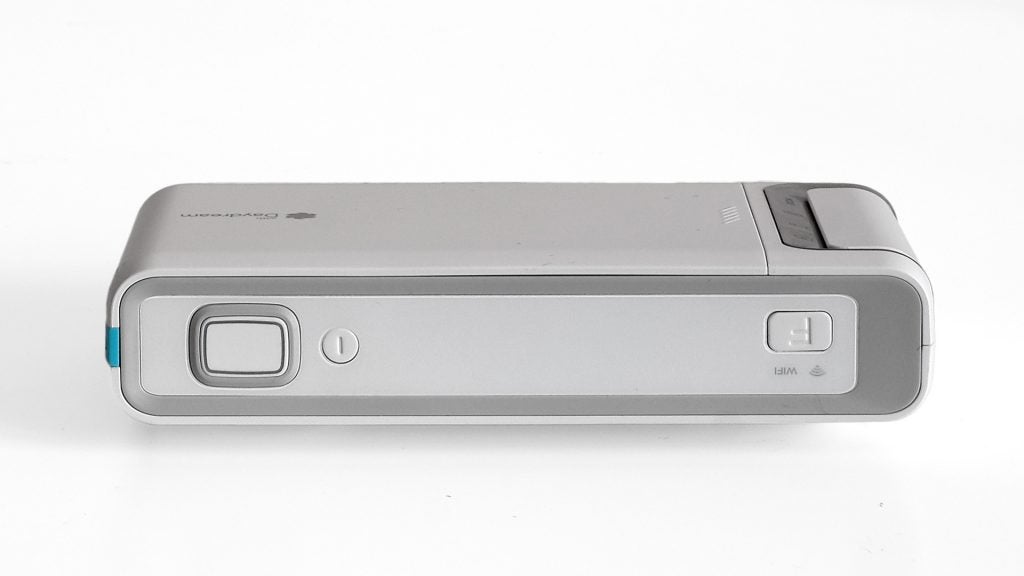 I plugged the photos and video I took into the Lenovo Mirage headset using a microSD, to avoid any extra compression by uploading to Google Photos. Reviewing footage is fun, and WorldSense means videos are always seen at the “correct” angle. For example, shoot right up at the sky and you’ll have to look up to see it.

However, footage is quite soft-looking, even at 4K. You’ll also see some very clear image quality issues caused by the Google VR codec. Walking along a rough tarmac pavement, the texture becomes a blurred mess.

Dynamic range isn’t terrific, either. A good VR experience immerses you in a world, real or otherwise, but the Lenovo Mirage Camera’s video can’t manage that illusion.

Should we expect pro-quality footage from a £280 VR camera? No. However, it’s important to bear in mind that the Lenovo Mirage Camera won’t appear to max-out the resolution of the Mirage headset’s display. 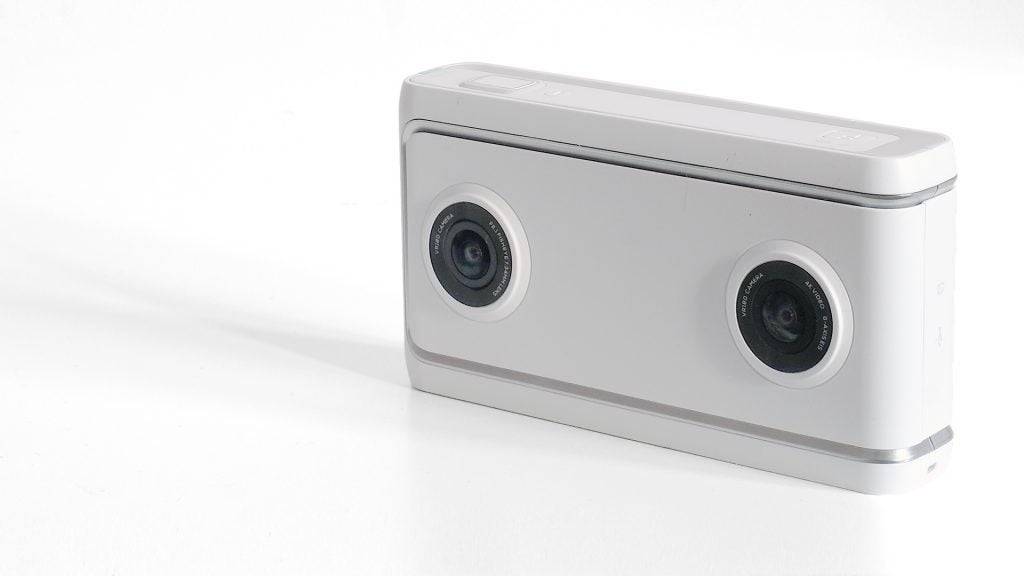 Static pictures are quite different, however. The camera’s 9-megapixel 3D images look great, with a much clearer 3D effect and better sharpness than captured video. Here you do get the sense that images are made for the VR headset’s display.

You start to wish you could lean into the image using WorldSense’s full freedom of movement. Sadly, you can’t, but the sense of a real 3D scene is impressive.

There are improvements to be made, of course. Dynamic range could be better. Blown highlights are quite common. But this is typical of a phone-grade 13-megapixel camera sensor without intense HDR processing.

Here are a few samples to show off that 180-degree field of view: 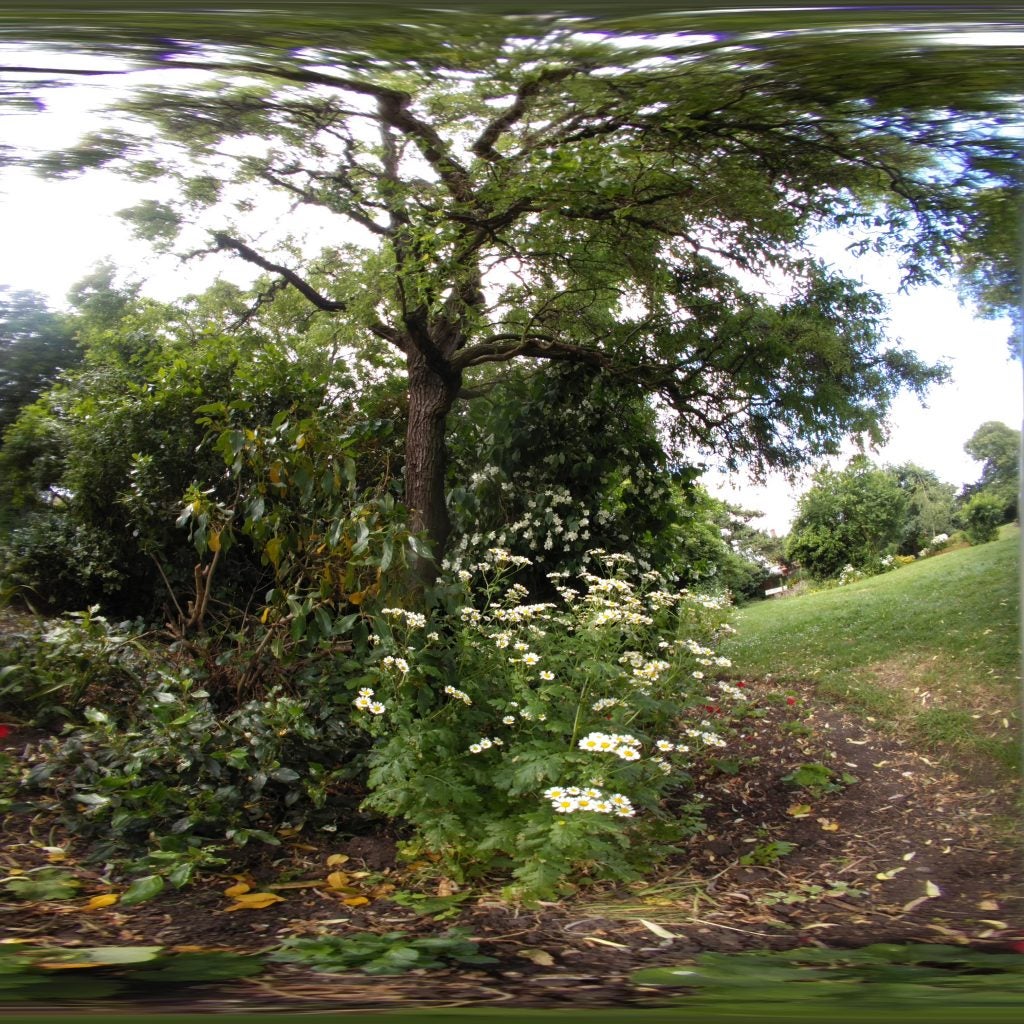 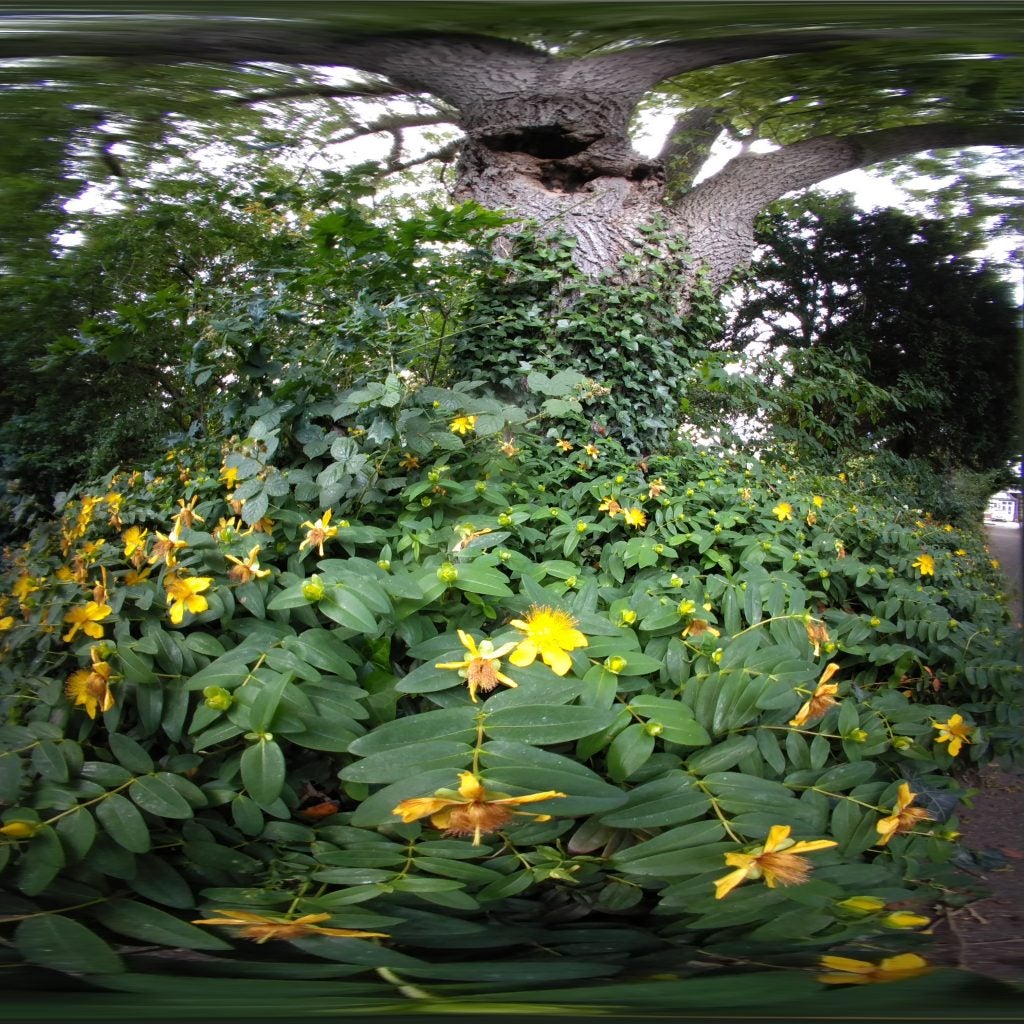 Ultra close-up shooting is also problematic in video and photos. This is a physics issue, not a hardware one. Unlike our eyes, this unit’s cameras don’t move. When you get very close to the subject, the disparity between the left and right eye images becomes too great and you end up with a headache-inducing 3D nightmare.

However, since you need to get pretty close, this doesn’t lose the Lenovo Mirage Camera any points. The only obvious solutions are to use more cameras with less wide-angle lenses, or possibly semi-software generated 3D for close objects. These don’t seem likely in a first-gen, affordable-ish device. 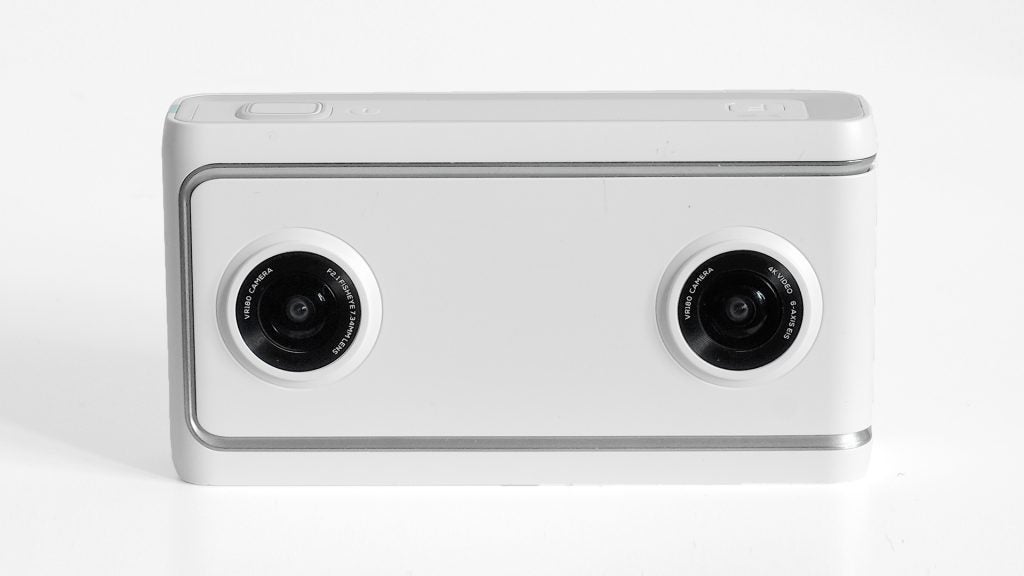 Why buy the Lenovo Mirage Camera?

The Lenovo Mirage Camera makes shooting 3D 180-degree virtual reality video a cinch. However, in some respects it does feel like the first-wave device it is.

Build quality could be better, its LEDs aren’y clear enough for outdoors use on a bright day, and video quality isn’t mind-blowing. Raw video quality is just okay and the VR codec lowers it.

However, its 3D VR stills are surprisingly immersive and a lot of fun to explore with a VR headset.

It’s better for stills and video, but does enough to prove exciting things are ahead for 3D VR footage.