The Lenovo Legion 7 is a great gaming laptop that excels at the basics, with a top-notch performance and gorgeous Full HD display with Dolby Vision support. But it arguably lacks a killer feature to justify the comparatively expensive price point, with better value offered by Asus and HP machines.

The Lenovo Legion 7 is a classic gaming laptop, featuring a slew of RGB lighting, powerful internal components and a speedy Full HD display.

But with the gaming laptop market more crowded than ever, Lenovo is arguably lacking that killer feature to help its portable gaming PC stand out.

Does that make the Legion 7 a poor option? Absolutely not – the Legion 7 excels at the basics, with a gorgeous Full HD display and powerful performance. This is a great gaming laptop that should please any owner, but is it a better option than the more affordable HP Omen 15 or the more stylish Razer Blade 15?

Gaming laptops are beginning to get more modest, cutting down the number of RGB lighting and eccentric design choices in order to better blend in at the office. The Lenovo Legion 7 has gone in the opposite direction, doubling down on all the aesthetics that are iconic in the industry.

First of all, there’s a heck of a lot of lights, to the extent that it looks like the laptop has swallowed a disco ball. The RGB keyboard vibrantly glows with a rainbow’s worth of colours, while bright lights shine out of the exterior vents and various ports too.

I personally think it looks great, but I can understand if others find it overbearing. Even if you deactivate all the RGB lighting, the laptop still dominates the eye with the protruding vents. 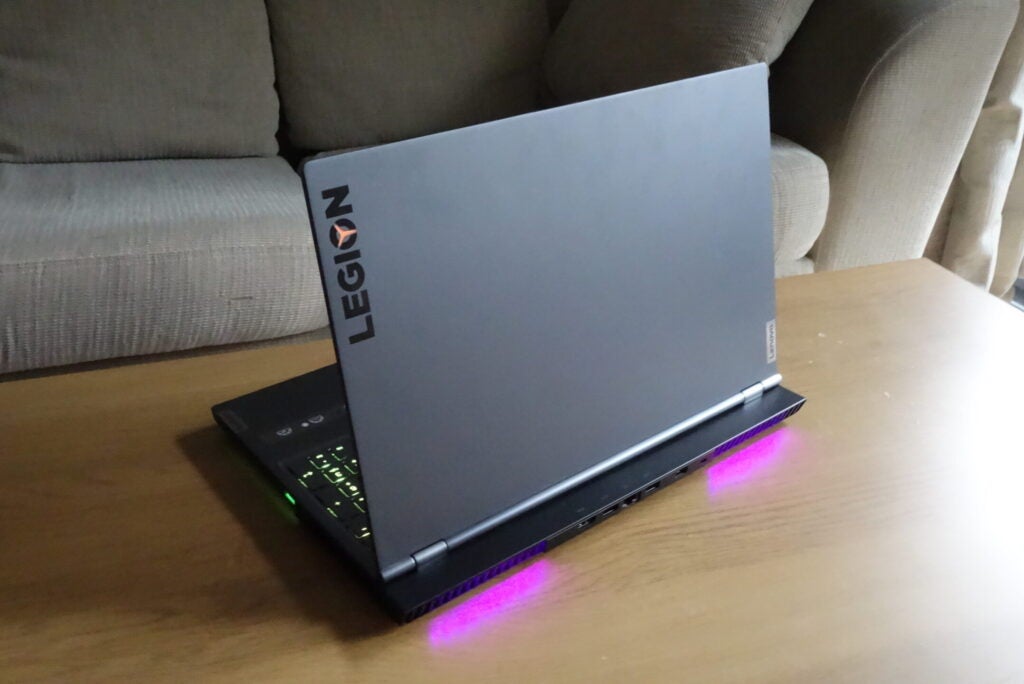 It’s a fairly chunky laptop, measuring in at 20mm thick and weighing a hefty 2.1kg, but these figures are typical of a portable with this much power. It’s easy enough to shove in your bag and be on your way, although I would recommend something lighter if you want a laptop for frequent commutes.

The all-metal design looks and feels classy on first impressions, but push the bottom of the screen and you’ll notice some concerning flex – this isn’t as well built as say the Razer Blade 15 (2020).

There’s a huge range of ports on offer here, all spread across the right and left rims, as well as the laptop’s rear. The port options include USB-C (Thunderbolt 3), USB-A (3.1), HDMI, Ethernet and a headphone jack – there’s not much else a gamer needs. 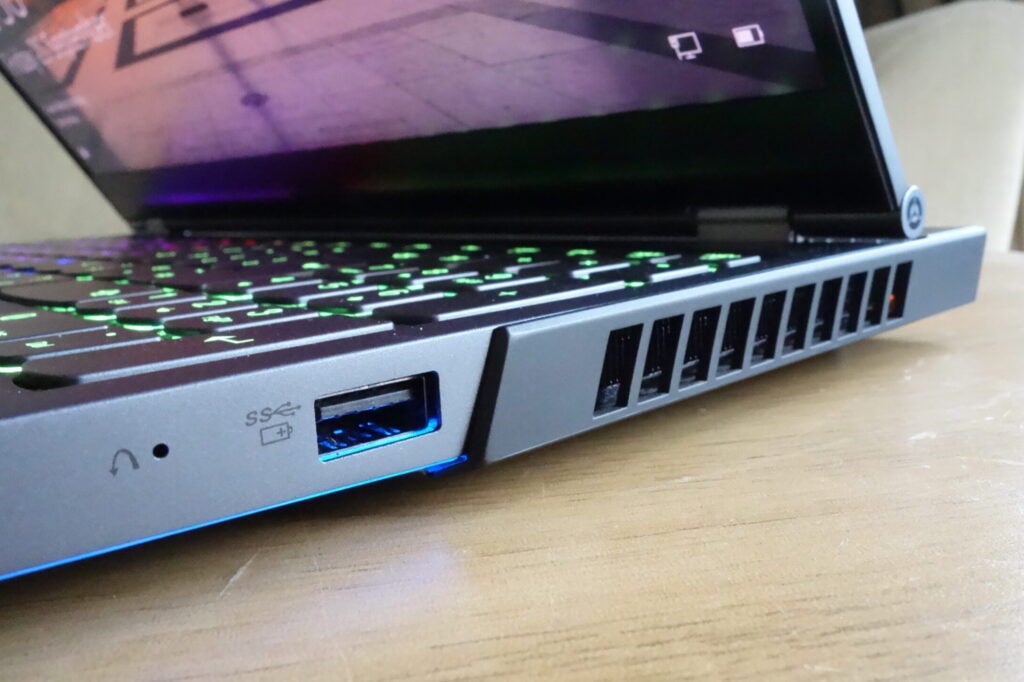 A 720P HD camera is nestled laptop’s top bezel, with a physical slider allowing you to block the sensor’s view, preventing any concerns of snooping hackers.

The down-firing speakers offer surprisingly good audio quality, but can get muffled by the desk. While the speakers are reasonable enough to use, I’d still recommend a gaming headset.

The Lenovo Legion 7 keyboard is packed full of glowing keys, with the default spectrum of colours producing a memorising effect. The lighting is a bit awkward to customise though, with Lenovo way behind the likes of Razer for seamless tweaking.

But how do the keys actually feel and perform? Pretty good actually. There’s chunky travel to each key press, and they’re big enough to easily tap during a frantic firefight. 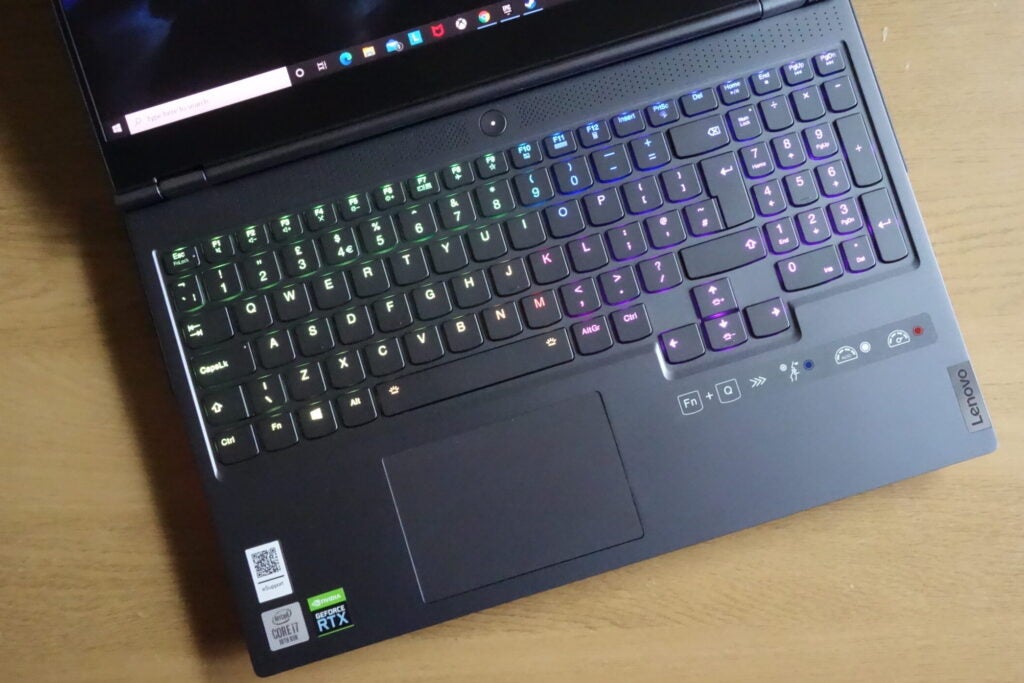 Lenovo has done a good job at fitting all the keys on the deck without squeezing select keys down a size. While most laptops tend to shrink the arrow keys in order to accommodate the number pad, Lenovo has instead moved them down a tad. It looks a little odd having the arrow keys located below the spacebar, but I personally prefer this to having them cut in half.

The trackpad is big and responsive enough to be an adequate substitute for a proper mouse, although it’s been shifted over to the left rather than sitting bang in the middle. This forces you into a rather uncomfortable position when using the WASD keys simultaneously, making a gaming mouse purchase a priority.

The Lenovo Legion 7 features a 15.6-inch Full HD IPS panel, with the refresh rate climbing as high as 240Hz. It’s a shame there’s no 4K option, but refresh rate is arguably more important than resolution for gaming.

The display is superb, featuring a high 552-nit brightness which results in a commendable 1236:1 contrast ratio. The likes of Horizon Zero Dawn and Borderlands 3 looked excellent – in fact, I’d go as far as saying this is one of the best Full HD gaming laptop displays I’ve seen, presenting bright and punchy colours. 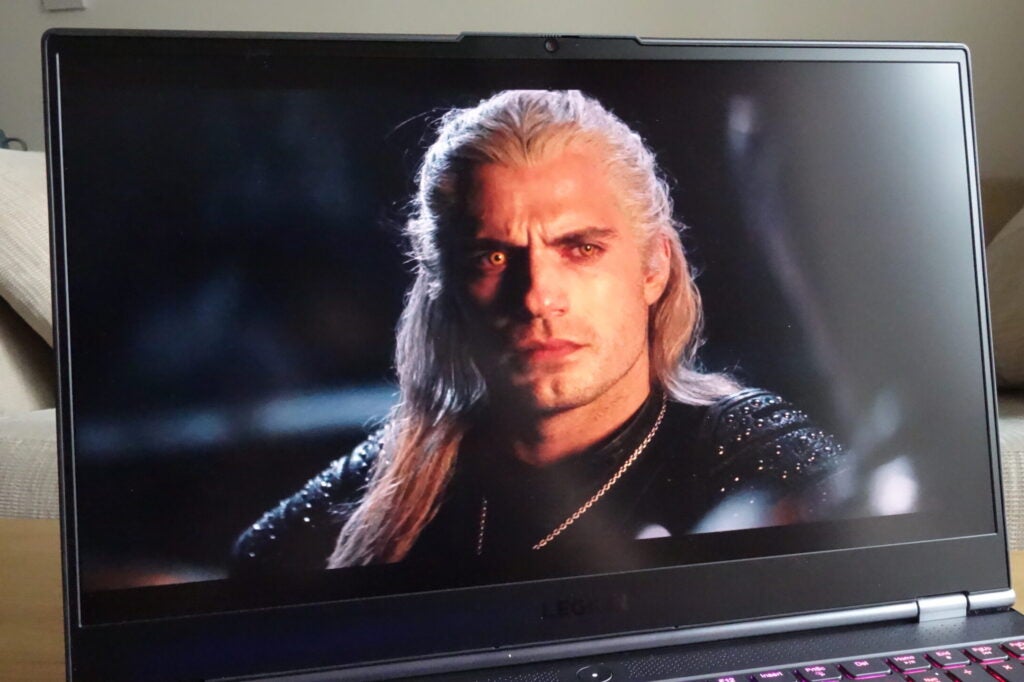 That said, the 7480K colour temperature means the display can appear cooler than natural daylight, giving white backgrounds a noticeable blue tint. It’s not a significant issue, and isn’t noticeable at all when exploring in-game worlds.

Nvidia G-Sync is unfortunately exclusive to the most powerful configuration, which means lower spec models may suffer screen tearing issues. Support for VESA DisplayHDR 400 and Dolby Vision is at least supported by every model, which makes a big difference to compatible games.

The Lenovo Legion 7 is obviously a gaming laptop first most, but it’s also capable of doubling up as a laptop for professional-grade creators, with the gamut coverage for sRGB and Adobe RGB coming in at 99.8% and 97% respectively. This means the colours in digital artwork and photography should be presented accurately, whereas most gaming laptops often see some distortion.

The Lenovo Legion 7 has a huge selection of Nvidia GPUs available, ranging from the Full HD ready GTX 1660 Ti to the monstrously powerful RTX 2080 Super. With so many configuration options, you’re able to pick up a budget gaming laptop or even one of the most powerful gaming portables currently available.

Intel’s 10th Generation H-Series processors are along for the ride too, with up to 32GB of RAM ensuring everything runs as smoothly as possible.

We pitted the Legion 7 up against the HP Omen 15 (2020) and Razer Blade (2020), which is admittedly an unfair contest considering they both feature the weaker RTX 2070 graphics card and are a few hundred quid cheaper. However, it’s still useful to know what kind of bang you’re getting for the extra buck.

As you can see, the Legion 7 unsurprisingly blazed ahead both of its rivals, even in the CPU tests despite featuring the same Intel chip. With little to no heating issues, it appears that the cooling system is very efficient at optimising the internal components.

How do these benchmark figures translate to gaming performance? Very well. The Legion 7 posted some of the best results we’ve seen for both Borderlands 3 and Horizon Zero Dawn in Full HD.

That said, the Legion only sees a 12fps lead in Borderlands 3 over the HP Omen 15 (2020) RTX 2070 configuration – I’d argue that performance jump isn’t enough to justify the £600 difference.

Fortunately lower-end configurations of the Legion are far more affordable, but I’ve been unable to put those to the test to see how they compare to rival laptops.

Still, if you’re buying the Lenovo Legion 7 you can be safe in the knowledge that this gaming laptop will be able to run any game in Full HD, with the high-end models also making the most of the high refresh rate for eSport games.

The SSD speeds are also wicked fast, with read and write speeds recorded as 3236 MB/s and 2236 MB/s which is way above the average. This means games should breeze through loading screens at a pretty speedy pace, making each respawn less frustrating.

Gaming laptops have notoriously poor battery life, with all the high-powered components draining power at an accelerated rate. Three hours seems to be the average for the stamina of a gaming laptop away from the mains, but the Lenovo Legion 7 falls dreadfully short on that figure.

Our battery benchmark test saw the Legion 7 last almost exactly 2 hours before requiring a recharge, and that was just for day-to-day use such as office applications and video chats. 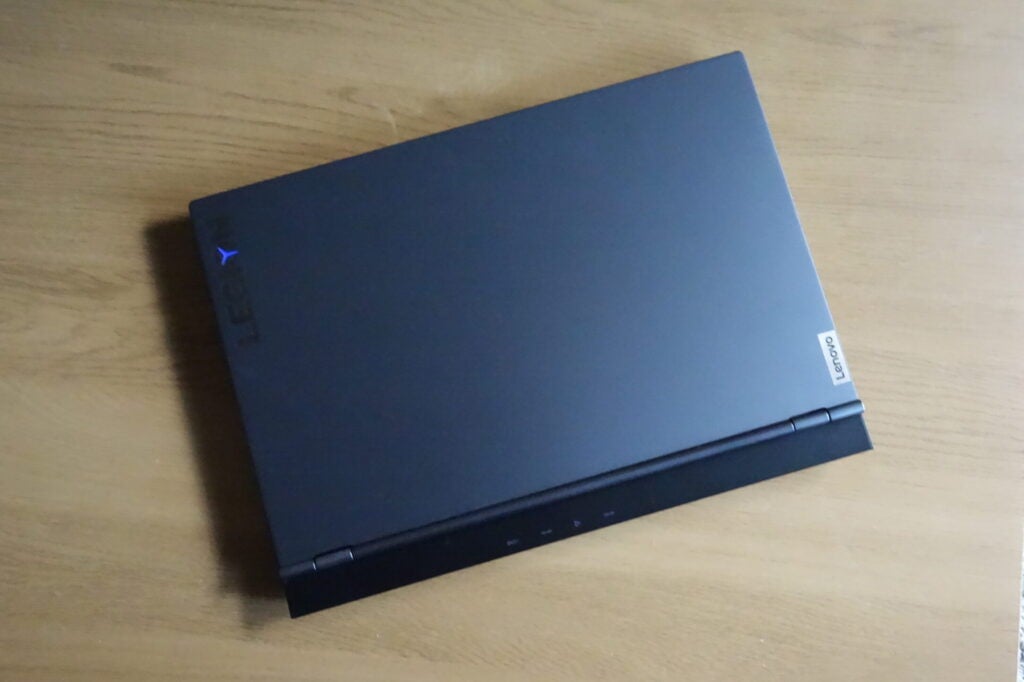 If you intend on playing games on the Legion 7 away from the mains, expect that battery life to plummet even further. This gaming laptop should only really be considered as a desktop replacement that infrequently leaves your home.

Should you buy the Lenovo Legion 7?

The Lenovo Legion is a great gaming laptop, with notable strengths such as a range of GPU configurations, a bright and colourful Full HD display with Dolby Vision and so much RGB lighting that it looks even more glitzy than a Christmas tree.

However, with a comparatively expensive price point, you arguably get better value with the likes of the HP Omen 15 and Razer Blade 15. And besides the gorgeous Full HD display, there isn’t really a substantial unique selling point here that makes the Legion stand out from a crowded market, such as Gigabyte Aorus 15G’s mechanical keyboard.

The Lenovo Legion 7 covers the basics with aplomb, but does little to push the envelope. It’s still very much a worthwhile option though, especially if it gets discounted in future sales.