If you want to control your home theatre PC (HTPC) from your couch, you’re facing a difficult choice. A Microsoft remote may be adequate for controlling media playback and basic pointer control, but isn’t very convenient when you want to type in a search term or engage in a little chat. There are plenty of wireless keyboards around of course, but most are large, clunky affairs designed to sit on a desk. However, there are a few solutions that offer a compact keyboard and pointer in a single nifty device, and we’re checking out Lenovo’s solution.

“Lenovo Multimedia Remote with Keyboard” – yes, that is its full name – may not exactly roll off the tongue, and N5902 will be a fairly meaningless model number to most people, but this tiny device is actually one of the better ways to stay on the couch when interacting with your HTPC. It comes bundled with Lenovo’s Q180, is available online for around £33, or can be bought separately direct from Lenovo for £43 – which, considering its features, is still good value. 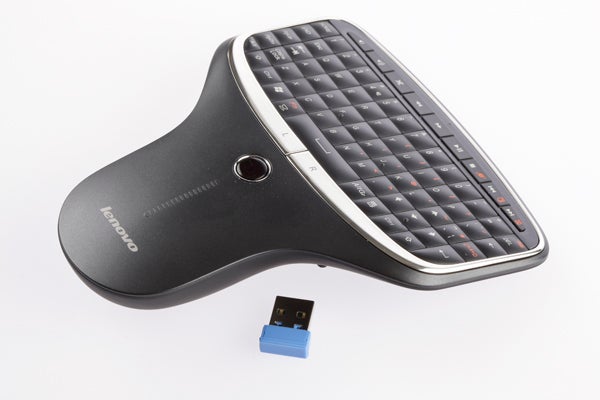 To give you the basics, we’re talking about an ergonomic RF remote that’s built like a brick, with its own micro-USB dongle. It offers a comfortable, fully backlit thumb keyboard, dedicated multimedia controls, touch-scrolling and an optical trackpad. It’s much like its predecessor, the N5901, with added backlighting, a fingerprint-obliterating finish, and a few other tweaks. 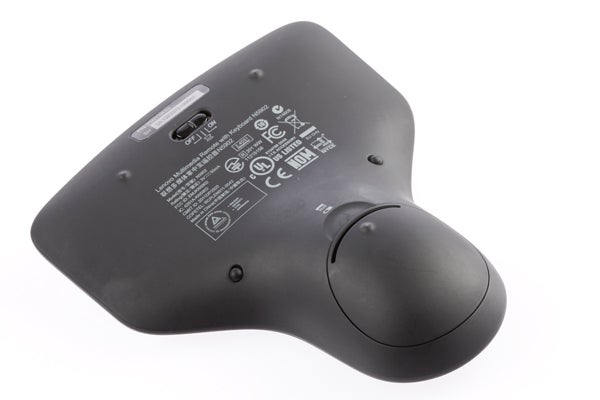 Where design is concerned, the mostly black N5902 is an odd little beast. It’s shaped a bit like an ice-scraper, with the crossways section housing the keyboard and the ‘handle’ accommodating the trackpad and touchstrip for scrolling. When used with one hand, this bulbous handle is the part resting in your palm. Thanks to a curved, soft-touch underside and the weight of its twin AA batteries, it’s incredibly comfortable to hold. 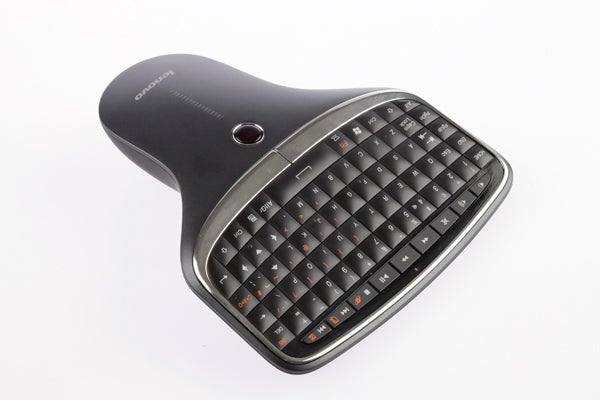 Its styling is enhanced by its tight curves and the chrome strip around the keyboard, though this is also the only part that picks up fingerprints. The semi-glossy touch section of the N5902 doesn’t show a single print or smear, no matter what angle you view it at.

Build quality is superb throughout. Like Lenovo’s ThinkPad range such as the X121e, this device is built like a tank, and it feels like you could easily drop it or sit on it without breaking the chassis. 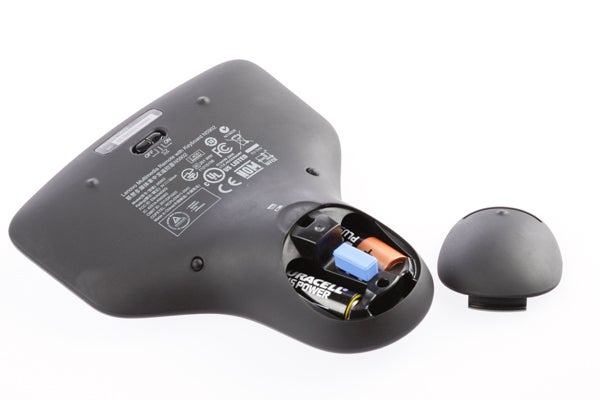 As mentioned, the N5902 comes with a tiny microUSB dongle which uses 2.4GHz RF rather than the more complicated Bluetooth. It’s bright blue to make it easier to spot, and is stored in the battery compartment when not in use, so you’ll never need to worry about losing it when taking the remote to presentations or a friend’s. Lenovo’s dinky remote itself is powered by two AA batteries which you can easily replace with rechargeables. The battery cover is very solid but isn’t hinged or attached.

A small switch at the remote’s bottom has three settings: off, lit and on. The first and last are self-explanatory, while the middle setting activates keyboard backlighting. Actually turning it on requires an extra press of a dedicated key which doubles as Fn. With strong white LED backlighting (secondary functions appear in orange) yet no sign of bleed, it’s very easy to type in the dark. 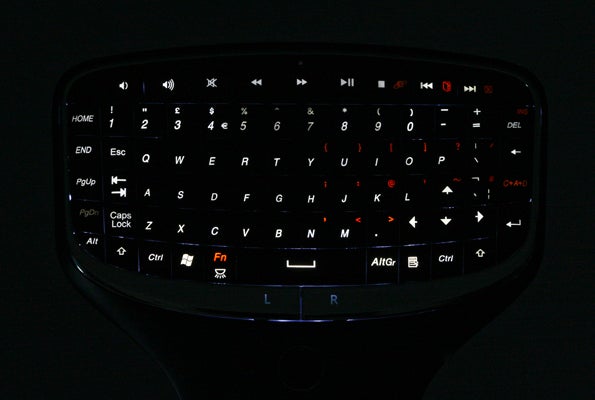 The N5902’s keyboard gives you a full QWERTY layout with dedicated function keys to either side and volume plus multimedia playback ones along the top. Pretty much every key you would get on a regular keyboard is there on its own key, with only a few of the lesser-used characters doubled. There’s even a dedicated Ctrl-Alt-Del key for calling up the Windows Task Manager and/or soft-resetting your computer. 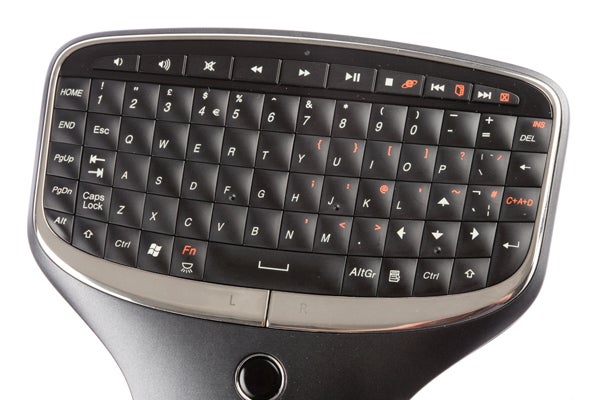 Though the keyboard’s keys are tiny, they’re shaped to be easily distinguishable by touch thanks to their convex bulge, and only those with very broad digits will have any trouble. Feedback is astonishingly good with a clearly defined click – in fact, the N5902 is the closest thing to a Blackberry Bold 9900 keyboard we’ve yet encountered outside of a mobile phone – and for those who haven’t used a Blackberry keyboard, that’s high praise indeed. Our only niggle is that the weight is a little off when trying to hold the remote with both hands. 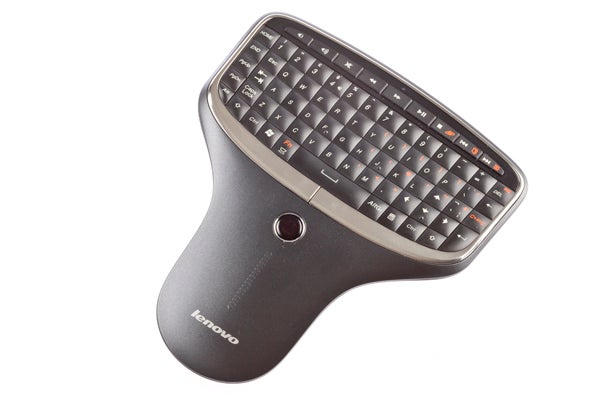 Discreetly incorporated into the chrome keyboard surround are nicely responsive left and right ‘mouse’ buttons, with the optical touchpad just below them. This touchpad is probably the weakest element of this remote, not because it doesn’t work or is poorly implemented, but simply because a full-size touchpad – not to mention a proper mouse – is simply a superior way to navigate around Windows. Still, it’s certainly usable.

Scrolling is the best we’ve yet encountered on a keyboard/mouse remote. Below the trackpad dot there’s a suggestion of a marking line. Running your finger along this offers beautifully smooth bi-directional scrolling with even the lightest touch. 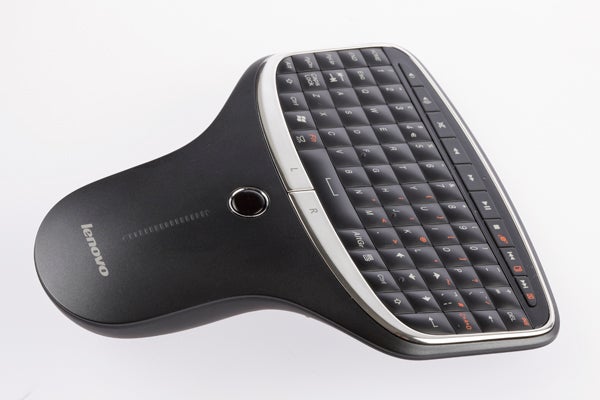 At £33 the N5902 isn’t the cheapest all-in keyboard/mouse remote, but it’s by far the best-built and least fussy. If you have a little more to spend and want something that’s more like your desktop keyboard, the £75 Logitech diNovo Mini might be more up your street – but if you’re looking for something ultra-compact that you can leave lying around without fear of pets or toddlers breaking it too easily, Lenovo’s nifty remote is the bee’s knees.

Verdict
The Lenovo Keyboard Multimedia Remote N5902 is a great little keyboard/mouse remote for fully controlling your (HT)PC from your couch. It’s built like a brick, small enough to fit in a coat pocket, offers a fully backlit QWERTY thumb keyboard that’s as nice to type on as a Blackberry phone’s, and provides a great scrolling experience. Only its optical trackpad can be a bit fiddly, but you won’t find much that’s better at this size.