What is the Lenovo IdeaPad 520S?

The Lenovo IdeaPad 520S is the second-tier laptop in the company’s lineup of thin, light and metal-clad laptops. Weighing in at 1.7kg and at 19.3mm thick, it’s bulkier than the 14-inch 720S, which itself isn’t quite as slim and sleek as the snazziest of laptops.

However, starting at just £600, this laptop is half the price of those most premium models yet still includes a Full HD IPS display, a choice of nippy Intel processors, capacious SSD storage, a backlit keyboard, and an attractive and mostly metal design.

If you’re after a good all-round laptop that has a few premium touches but doesn’t break the bank, the 520S is a great option, especially since it can also be configured with Nvidia graphics for better gaming performance.

Keep in mind that Lenovo’s also about to launch the IdeaPad 530, which means that while the 520S may not compare as well, it could also take a price tumble as and when retailers need to start shedding excess stock.

The 520S has a 14-inch screen with bezels that aren’t particularly narrow, plus it’s 19.3mm thick. As such, this device is markedly bigger and heavier than the Microsoft Surface Laptop, Dell XPS 13 and MacBook Pro. It remains portable, but I wouldn’t describe it as a ‘take-anywhere’ machine.

Nonetheless, it retains much of the premium feel of the above machines thanks to its aluminium top and keyboard surround. Sadly, the bottom section is painted plastic rather than metal – but it looks good, nevertheless. 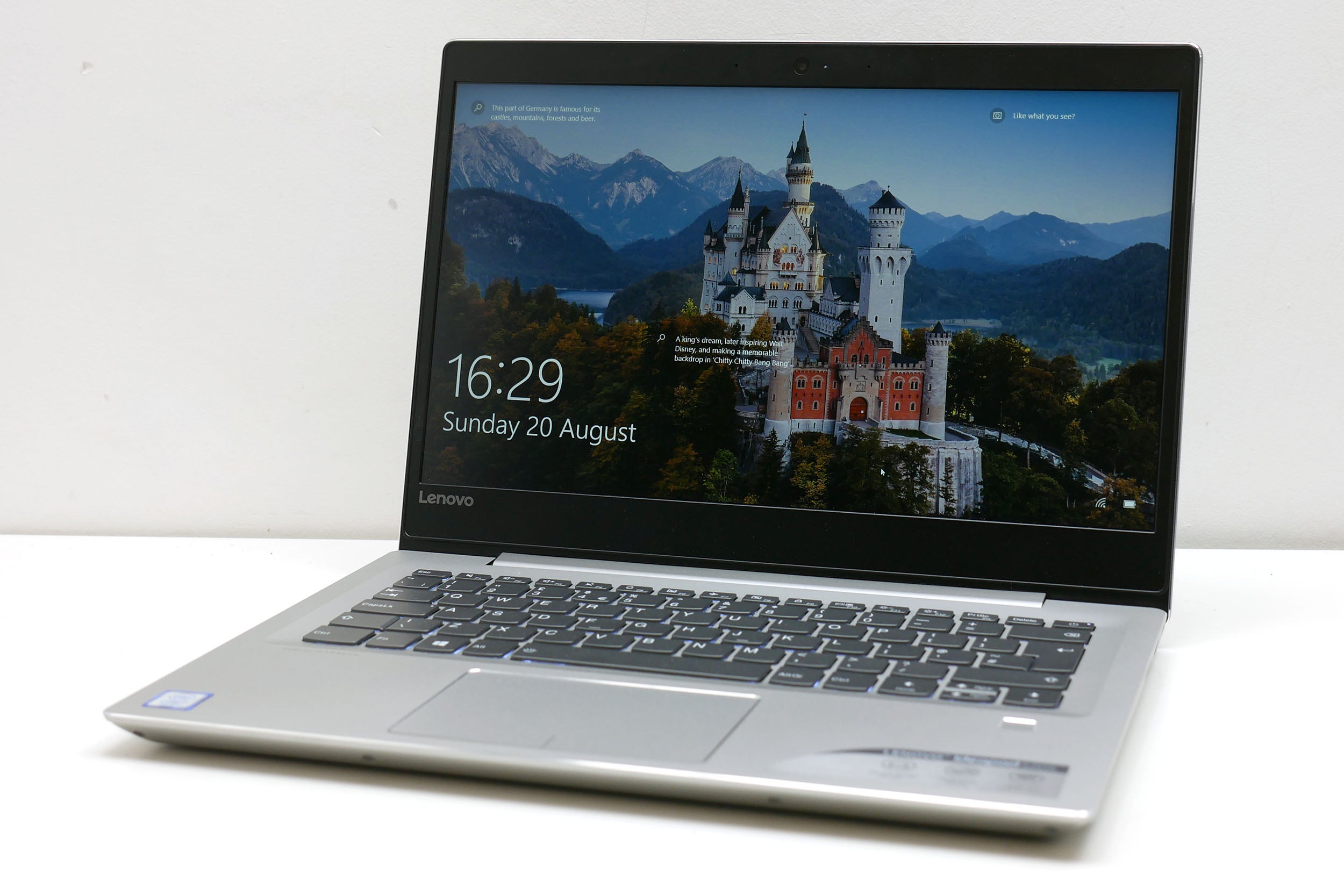 Note, too, that the metal here is super-thin sheets that have been pressed into shape; the device isn’t hewn from solid slabs as is the case with the MacBooks. As a result, you don’t get that reassuring sense of solidity but rather there’s a fair bit of flex to most of the panels. Still, the overall look and feel is still a clear step up from cheaper, all-plastic laptops.

Open up this laptop and you’ll notice that the screen folds fully flat, which can be useful. However, the hinge is a touch loose – so much so that once past perpendicular, simply lifting up or putting down the laptop can cause the screen to drop further. Again, it’s the sort of issue that’s typical of cheaper laptops – you’re very much paying for the look and features of a premium device here, not necessarily the fit and finish.

As for those features, you get plenty. Connectivity is ample, with HDMI, USB 3.0, ThunderBolt and headphone ports down the left side and a second USB 3.0 port and a card reader on the right. The competing Acer Swift 3 manages to squeeze in an extra USB 3.0 port, but two plus the single ThunderBolt port should be sufficient for most users. 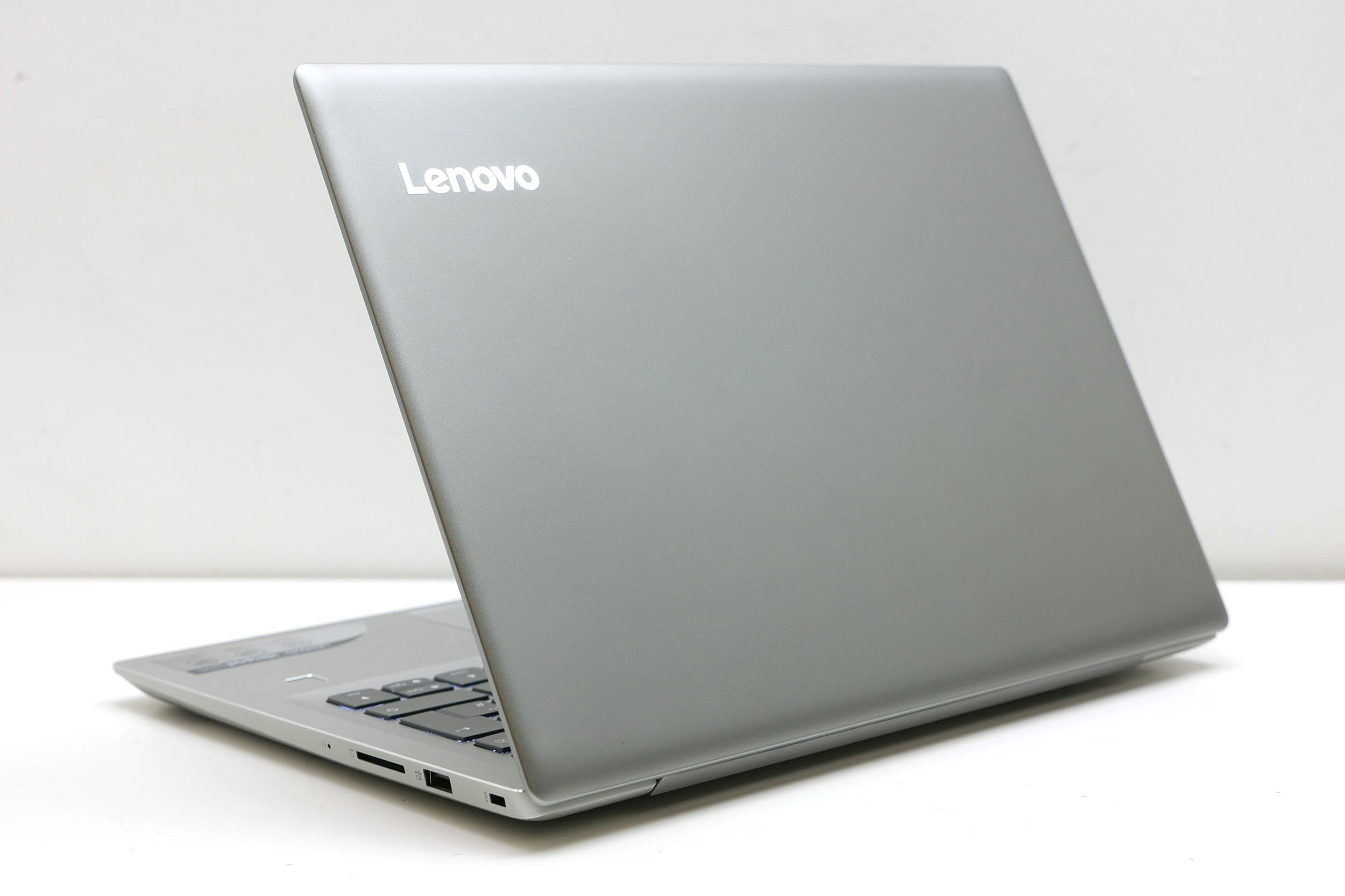 You also get a backlit keyboard, large single-button trackpad, a fingerprint reader and webcam.

Flip the laptop over and it’s easy to remove the entire base of this machine, making it easy to keep the inner workings clean and dust-free. This also results in easy access to swap out the 2.5-inch storage drive and RAM, plus there’s a spot for an M.2 SSD.

Typing is a pleasure on the 520S’s keyboard. Its spacious, the layout is excellent, and the key action makes for an easy touch-typing experience. There’s also backlighting on hand for when typing in the dark. There are laptops with better keyboards, but for the price I’ve no complaints.

The fingerprint reader below the keyboard works well enough too, making for a quick and convenient way to log in to your laptop. The same is true of the trackpad. Its large area makes it easy to move the cursor across the full width of the screen, its aluminium surface feels great, and the single-button click action is responsive. 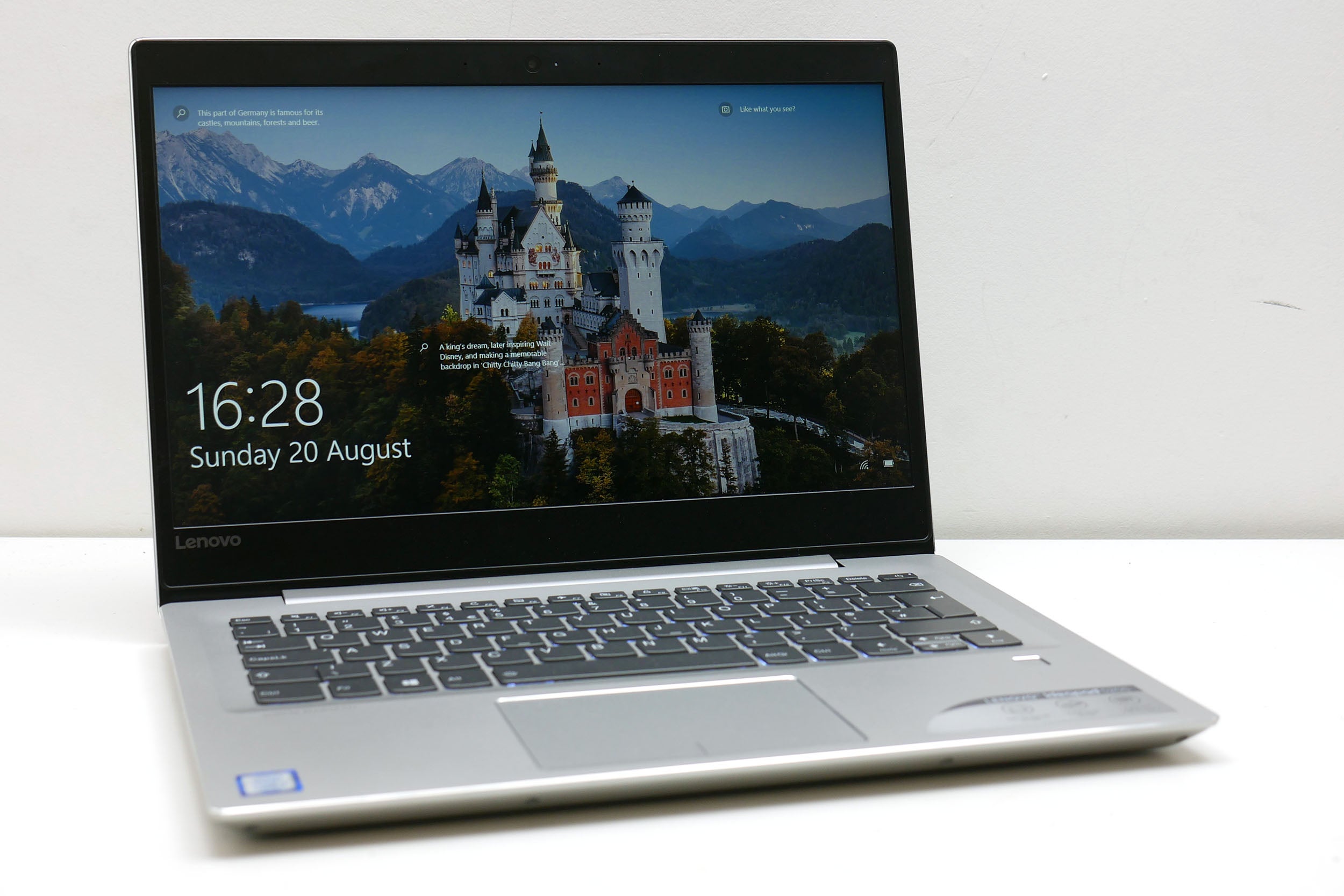 The web cam is your standard 720p/30fps affair that’s fine for basic video chat and streaming. The image is a bit grainy, but it produces decent colours and copes well in low light. In addition, the built-in microphone offers echo and keystroke noise reduction as well as beamforming to hone in on your voice.

When it comes to producing audio, this laptop has a pair of speakers, one in each corner on the underside of the front edge. From here the audio spills out to create a surprisingly effective stereo image.

Moreover, the quality of the audio is good. It’s clear and remains distortion-free even at maximum volume. Of course, bass is lacking – but there’s a modicum of depth to the sound, unlike the truly weedy speakers found on cheaper laptops.

Related: Best VPNs to use 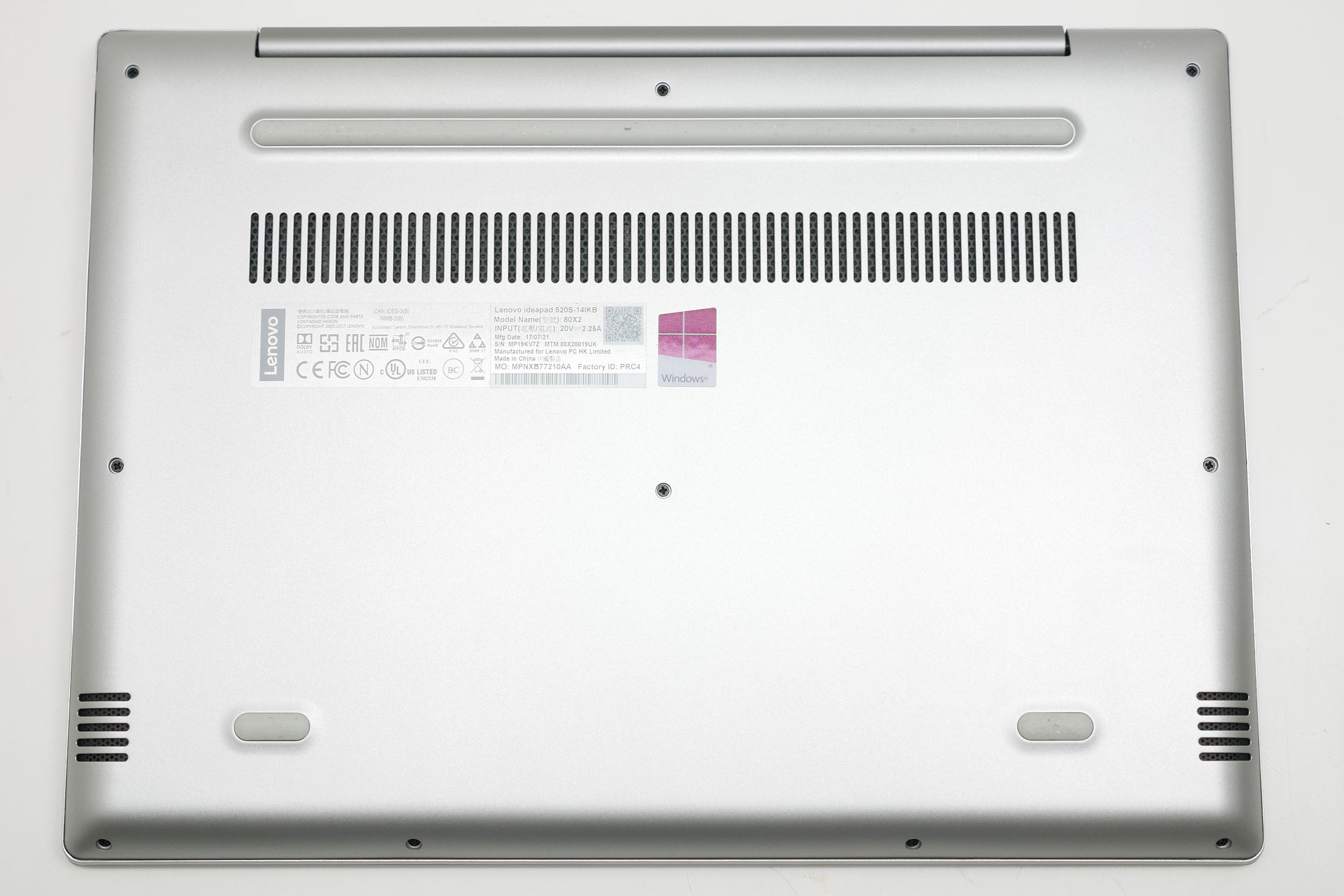 One key feature of the 520S that elevates it above more entry-level machines – other than its metal exterior – is its 14-inch screen. It uses an IPS LCD panel that provides better viewing angles and contrast and colours than cheaper TN LCD panels.

You also get a plentiful Full HD resolution, so the image is sharp and your workspace doesn’t feel cramped like it can on smaller, low-resolution displays.

The only downside is the slightly low maximum brightness level of 258nits. We generally like to see at least 300nits – and ideally 350-400nits – since this makes the screen much easier to see if you find yourself trying to get stuff done when outside or in other brightly lit conditions.

Otherwise, performance is decent. Colour balance is pretty close to our ideal, with a colour temperature of 6333K, while contrast is a plentiful 1285:1. Gamma is a touch low, at 1.99, meaning the panel displays darker colours a little brighter and more washed out than they should be, but it’s a very minor difference. 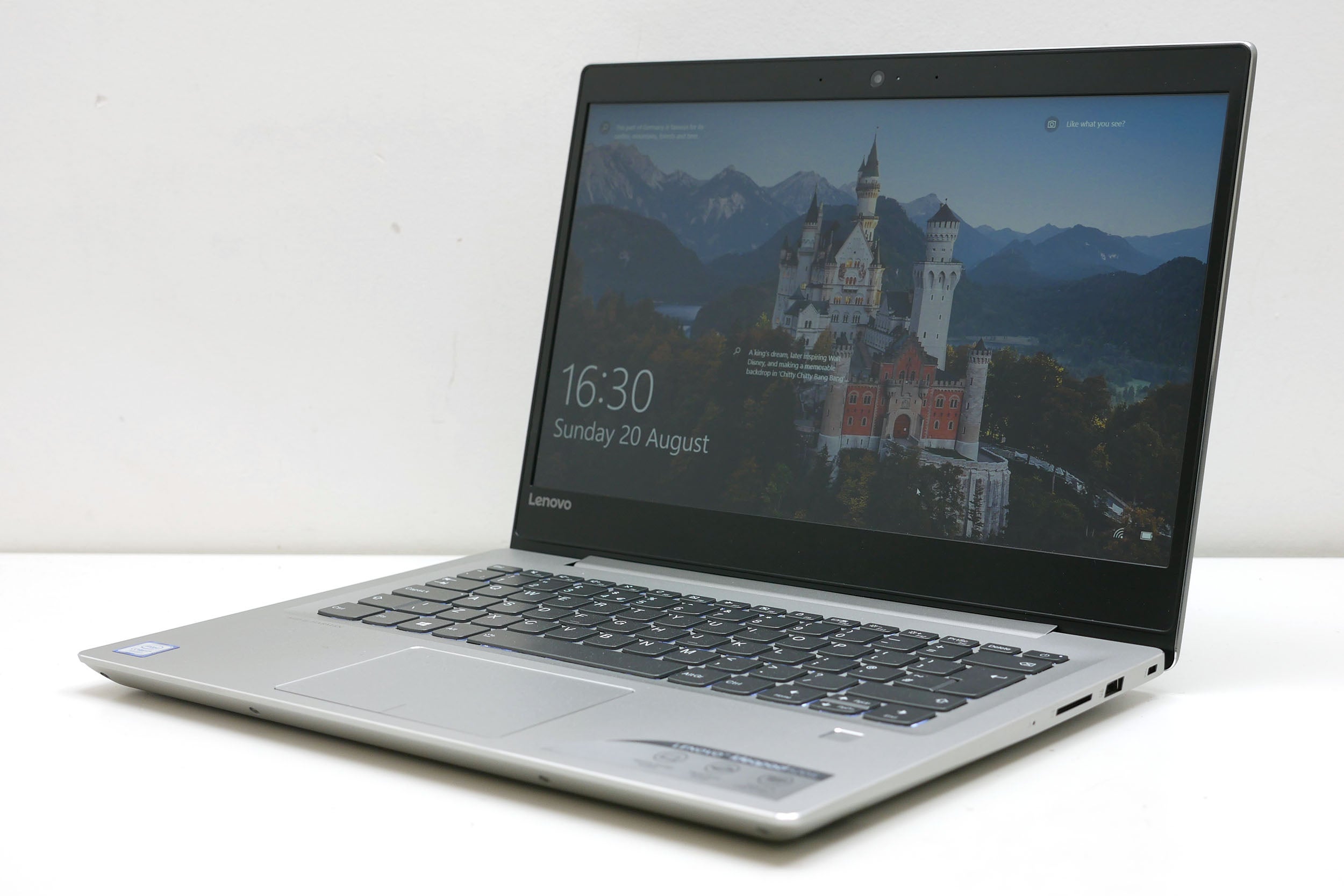 It is possible for content creators to get by with this screen, but they may want to upgrade to a better class of display since this one covers only 59.4% of the sRGB colour space.

Also, like the IdeaPad 720S, the brightness control on this laptop is a bit irksome. Tap the shortcut buttons and it adjusts by the standard 10% in Windows, but dropping from 100% to just 90% results in brightness going from 259nits to 180nits. Tapping the button again and dropping to 80%, brightness hits just 100nits. Such large changes make it difficult to find a level that offers the right balance – trying to hit our usual test level of 150nits required manually entering 85% brightness.

The Lenovo IdeaPad 520S is available in a number of configurations ranging from £600 up to £850. All share the same screen and 8GB of RAM with the CPU, SSD and graphics card being the options available.

The version sent in for review uses the i7-7500U without Nvidia graphics, as specification that can currently be found at John Lewis for £750, which would normally be the natural choice for professionals seeking plenty of CPU power but who don’t need extra graphics power. It’s decent value and neatly

Instead, most users will be happy with the £700 option that includes an Intel Core i5-7200U and 256GB SSD, but without the graphics, or the £750 option that adds in the Nvidia graphics.  There’s an almost bewildering amount of choice as far as specs go. 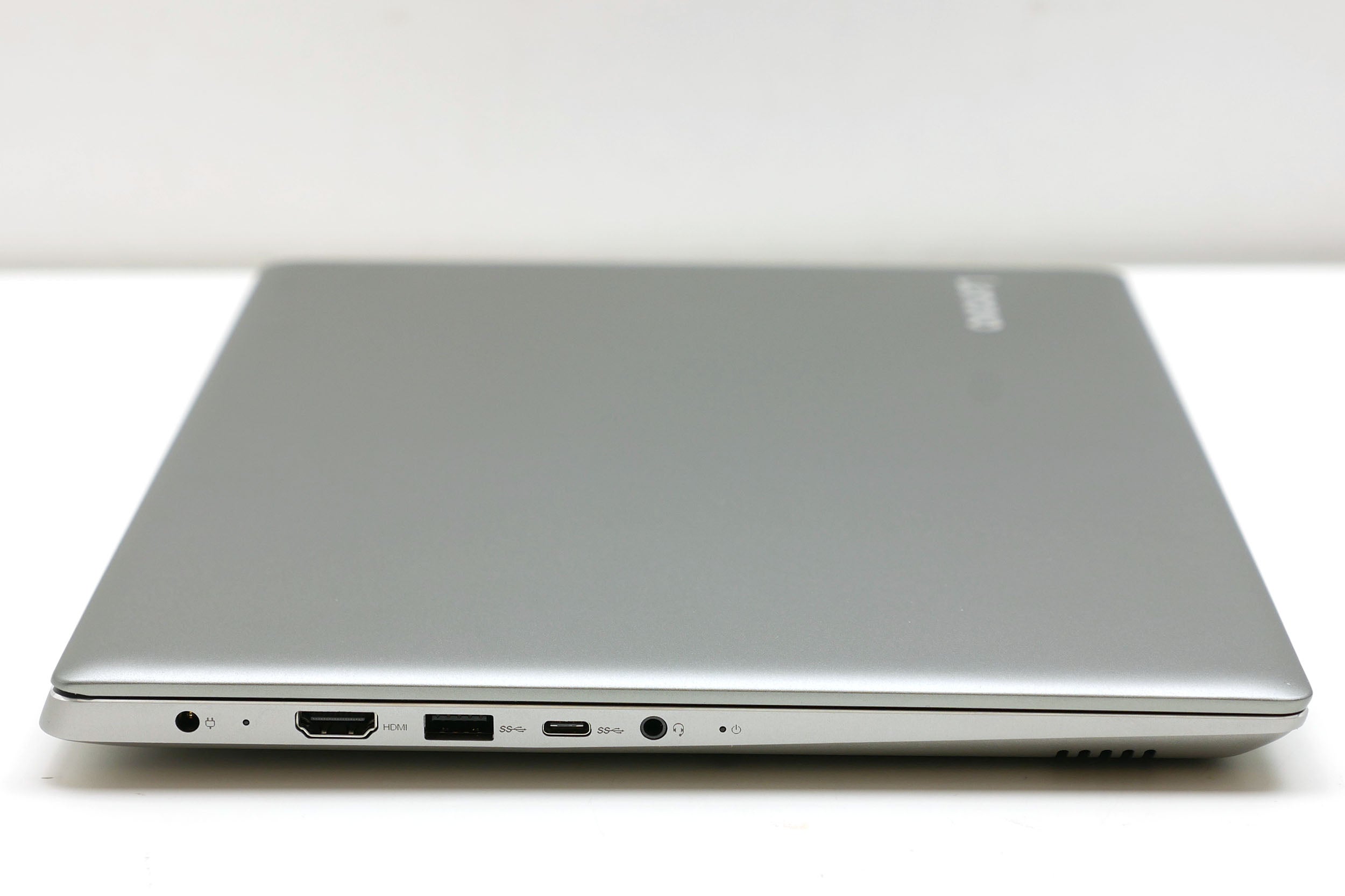 What does the addition of the graphics card get you? Well, it’s about two to three times more potent than the graphics processor included with the Intel processor. This means you’ll achieve genuinely playable frame rates in older and more basic games such as Minecraft and Counter-Strike: Global Offensive. You’ll still need to run them at relatively low resolutions and detail settings, but in comparison to the Intel graphics, you’re getting a much more playable experience.

In terms of benchmarks, the the graphics processor on the Intel Core i7-7500U CPU tested here manages 51,696 points in the 3DMark: Ice Storm test, while the Nvidia chip (tested on the 720S) hit 67,394. This seems like a modest increase, but that’s because this test is so basic as to be limited by the speed of the CPU. In the more demanding 3DMark: Fire Strike test, the Nvidia graphics manages 1925 points compared to just 804 for the Intel integrated.

The rest of the system is plenty fast enough, too. The 7500U combined with that 8GB of DDR4 RAM makes mincemeat of most tasks, with only power users likely to require more. In fact, the 7200U option will be sufficient for most.

The configuration here includes a SATA SSD, which means it’s limited to the 540MB/sec read and write speed that SATA can do. Not that the drive can even reach those numbers, instead delivering 492MB/sec read and 353MB/sec write. That’s still enough to feel reasonably nippy when booting, loading apps and moving files around – it just isn’t as nippy as the PCI-E SSD in the 720S, for instance.

Lenovo claims this laptop will last up to 12 hours on its battery, but in real-world use this figure will be lower. Minimise brightness to a near-unusable level and you might get close, but at a more sensible level of 150nits (85% on its brightness scale) I measured just 5hrs 56mins with our standard PowerMark test. At the same brightness, the 720S lasted nine hours.

What’s bizarre is that retesting at just 70nits (70%) saw battery life extend by only two minutes. That it made such a small difference suggests that maybe a program was running in the background that was keeping the laptop at a higher usage level than it should have been, and that at both brightness levels it was underperforming. Nevertheless, I’d still expect such a large change in brightness to make a bit more of a difference.

Testing just by watching Netflix for an hour (back at 150nits), the 520S’s battery consumed 16%, suggesting that six-to-seven-hour figure is fairly accurate.

Overall, this remains a perfect acceptable result – you’ll still only need to top-up once throughout a working day – but it’s a shame it isn’t closer to the claimed figures.

Meanwhile, models that include an Nvidia graphics card come with a larger three-cell battery, rather than the two-cell option here. While it’s possible this would result in similar battery life to the 720S (7200U with Nvidia graphics), I can’t say for certain.

Should I buy the Lenovo IdeaPad 520S?

For those seeking a device that offers a bit more portability, style and longer battery life than your typical entry-level laptop, but who don’t want to stretch to a truly premium Ultrabook, the 520S is a great choice.

It can’t quite offer the compactness or build quality of the latter, but its mostly metal exterior looks and feels nice, it has a good screen, performance is plentiful, and battery life will get you through most of a working day.

The option to add an Nvidia graphics card makes this a decent entry-level gaming laptop, too. Also consider the Acer Swift 5, which is lighter and a bit cheaper depending on which specification you pick.