Our technology is constantly being downsized, with ever more power fitting into smaller packages. The humble desktop PC is no exception, and with the advent of the nettop (the desktop counterpart to the netbook), pint-sized PCs have become common and affordable. Lenovo’s current consumer-focused contender in this market is its IdeaCentre Q180, the “world’s smallest fully functional desktop PC”. 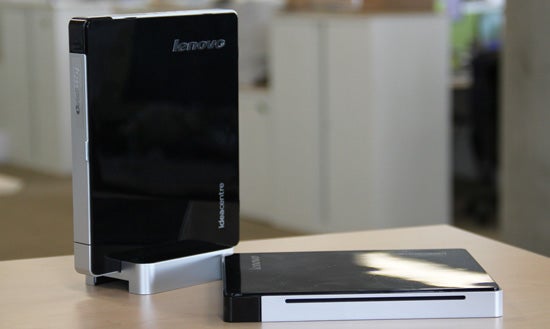 This miniature marvel is available in a variety of compact configurations, weighs a mere 742g, and has around the same volume as two stacked DVD cases – that is, unless you go for the model with included optical drive, which ups the thickness to 4cm. Can it match up to the competition with impressive contenders like the award-winning Zotac Zbox Nano already in the game?

Overview
First off, let’s get more of a feel for the Q180. Due to Lenovo’s use of an Atom processor and AMD Radeon 6450 graphics across the range, it’s definitely a nettop rather than a full-strength miniature Mac mini-like desktop PC such as the ASRock Vision 3D. However, since our review model comes with 4GB of RAM and a 750GB HDD plus the optional Blu-ray drive attachment and full keyboard remote, it’s at the premium end of its category, and a proper challenger to the Acer Aspire Revo 100. 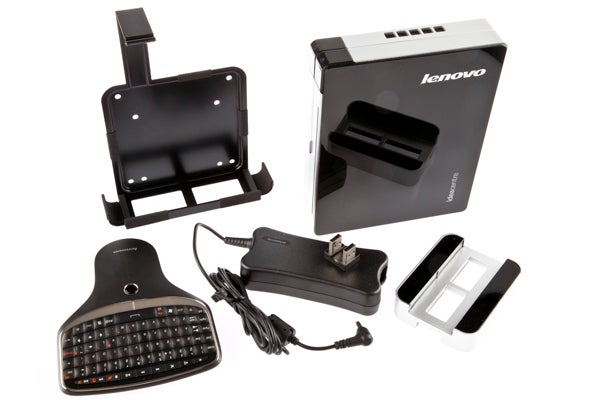 If right now you’re thinking the Lenovo IdeaCentre Q180’s other specifications are more than Intel’s Atom CPU will know what to do with, the Atom D2700 isn’t the same underpowered architecture that limited most netbooks of yore: rather it’s Intel’s next-generation, 2.13GHz, dual-core ‘Cedar Trail’ processor with support for four virtual cores. We’ll check out just how it all holds up in the performance section of this review.

Design & Build
It’s on style and size that the Q180’s appeal is strongest though. The dinky base unit is undeniably cute and super-slim. You can either stand it upright with the provided base or rest it horizontally on tiny rubber feet. Cleverly, the base accommodates both the slim standalone unit or the PC with its optical drive attached by merely turning it upside down (or downside up, as the case may be). 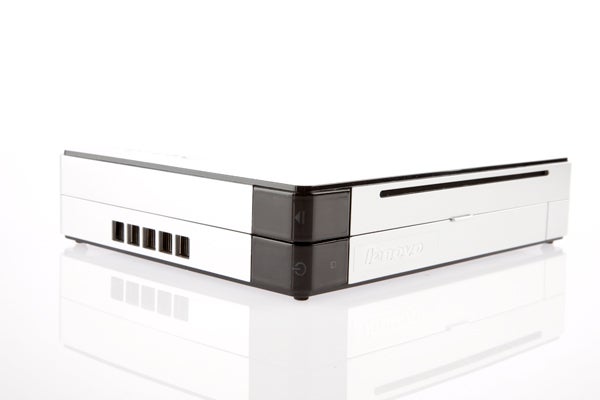 Build quality is pretty good, though nothing like any of Lenovo’s ThinkPad models.
The silver strip around most of the Q180 does make it look just a little cheap, but generally the combination with glossy black does work. What’s more fingerprints shouldn’t be as much of a problem as with a laptop, though when plugging peripherals in or out you’ll still get smudges on the shiny bits. 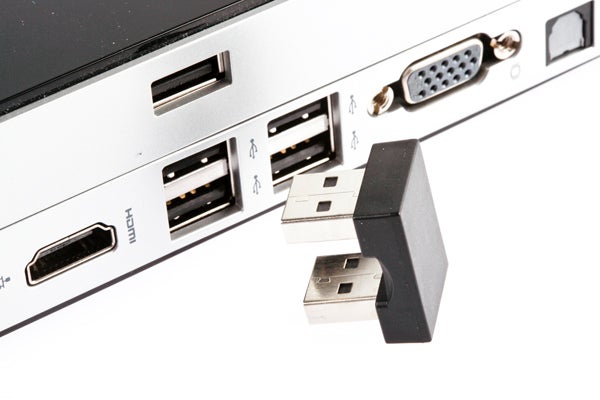 Attaching the optical drive section to the main unit is as simple as clicking it in and then plugging in the supplied USB bridge connector, which provides both power and data output to the otherwise sealed drive, as well as helping to hold the two units together. Though you do lose a USB port, it’s a simple and reasonably elegant solution.

Connectivity
Connectivity on the Lenovo IdeaCentre Q180 is excellent, with no obvious omissions. At the rear it provides a Gigabit Ethernet port, HDMI and VGA for video, four USB 2.0 ports (three if the optical drive plus bridge are attached), and an optical output for digital audio. At the front, a hinged flap hides an SDXC card slot, twin USB 3.0 ports, and headphone plus microphone jacks. The flap uses flexible plastic hinges, which though a little flimsy, in a neat touch automatically shut it again when there’s nothing holding it open. 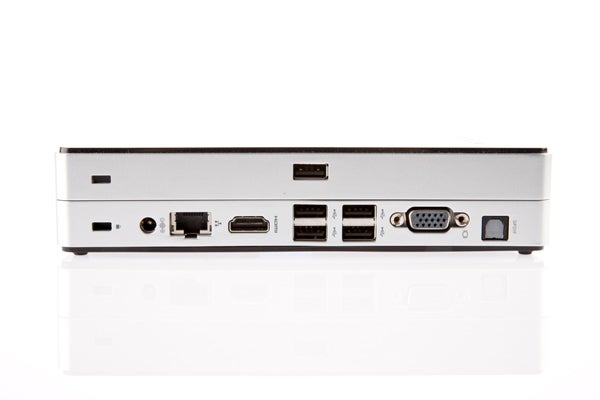 Wireless fans will be glad to hear that Wi-Fi N is built-in too, though Bluetooth isn’t part of the package. Still, this is easy to add through a USB dongle which shouldn’t set you back more than £5. 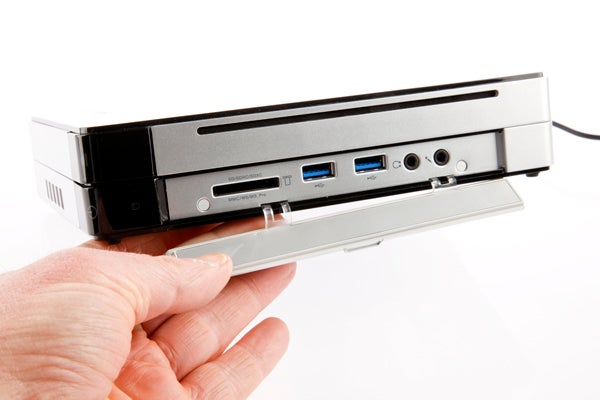 Naturally a PC this small has an external power brick. Lenovo’s curvy model takes a standard C5 three-pin power cable and sports a classy blue-backlit logo. The IdeaCentre Q180 can also be mounted on the back of your TV or monitor using the supplied mounting bracket. This is a very sturdy metal affair with plenty of padding to protect the PC against scratches or marks, and it’s great to see it included by default.

Wireless Remote
Another inclusion that’s the very fancy icing on a fairly delicious cake is Lenovo’s unique wireless “keyboard and mouse” remote, which we’ll be giving a review of its own soon. It’s an ergonomically shaped all-in-one device that’s decidedly premium-feeling. 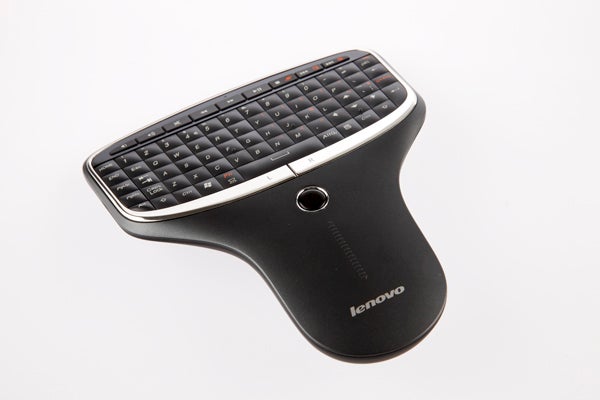 Build quality on the remote is excellent, with a soft-touch base and semi-glossy yet fingerprint-free top. The keyboard’s keys are by necessity tiny, but – much like most Blackberry phone keyboards – they’re nonetheless easy to type on since the convex keys are well-separated and have a positive click. The device’s shape and size ensure your thumbs are perfectly positioned to hit all of them without stretching. Best of all, this tiny keyboard is actually backlit! 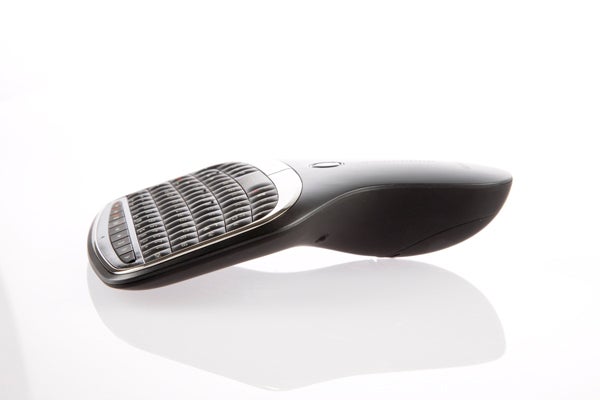 The ‘mouse’ part is actually a small optical sensor that’s again well-positioned to fall under your thumb, though you’ll need to change your grip from typing. It’s not as nice to use as a touchpad, but it’s certainly sufficient. The sensor itself is a button, though there are also dedicated left and right buttons just above it, disguised in the chrome bezel around the keyboard. For effortless scrolling, there’s a ribbed touch-sensitive strip just beneath the sensor, which is a great… well, touch. 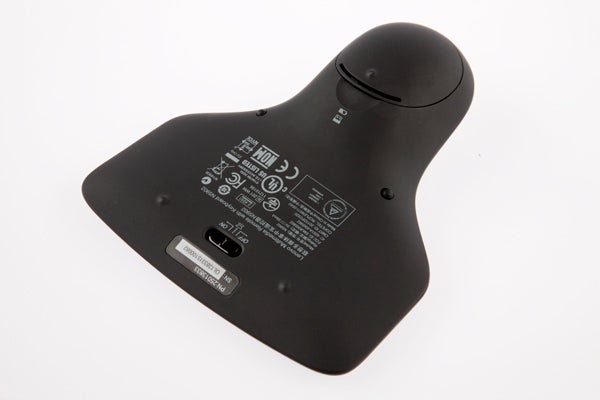 The remote uses RF to connect to the PC – or any other device with a USB port and a compatible driver – using its included micro dongle, which can be stored in the remote’s battery compartment when not in use. It also uses AA batteries, so they’re easy to replace with rechargeables.

Overall then, this is easily the best remote we’ve seen bundled with a nettop. It’s not as cool or stylish as the LED-keyboard-cum-touchpad built into the Acer Aspire Revo 100, but it’s more practical and comfier in the hand.

Performance
While the new 2.13GHz, dual-core Intel Atom D2700 beating at the Lenovo IdeaCentre Q180’s heart is a superior chip to previous Atom CPUs, we were actually a little disappointed at its performance. There are still instances in regular use where you’re left waiting and where it does come across that this is not a full-fat desktop chip. However, it must be said that for modest daily workloads, it now provides a smooth experience on some occasions where its predecessors slowed down or stuttered, especially with a few programs running simultaneously.

Just in case you saw the Q180’s promotional video where it shows off some pretty 3D gaming, forget about it. Atom still does not a game-worthy CPU make, and the Radeon GPU it’s paired with here doesn’t help much. In fact, an average frame rate of 22fps in TrackMania Nations Forever at 720p and Medium detail is very poor – even basic 3D games will be out the question.

However, that’s by no means a disparagement of the Q180 compared to other nettops. For example, the Acer Aspire Revo 100 with its AMD Athlon II Neo and Nvidia ION graphics only managed 15fps in the same test. Also, as you would hope, HD video and Blu-ray playback casued no problems. 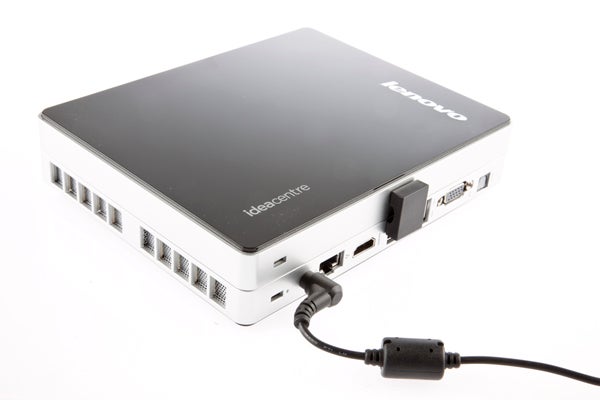 Part of the generally decent performance of our review sample is doubtless thanks to its 4GB of RAM, which is as much as is found on far more powerful desktop computers. The 750GB hard drive is a slower 5,400rpm model though.

Value
Lenovo’s IdeaCentre Q180 is available in a variety of configurations with prices to match, from £235/£180 (with/without Windows) for the most basic configuration of 2GB of RAM, a 320GB HDD and no optical drive – to £350 for our review configuration with 4GB of RAM, a 750GB HDD and a Blu-ray drive. For most users, the extra storage space and flexibility will be well worth the extra £100 between the two Windows configurations. 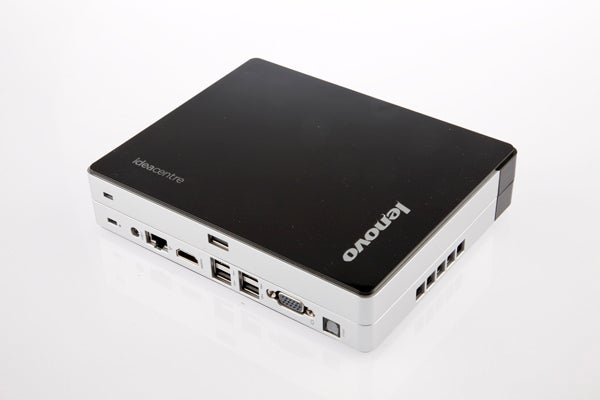 So how does the fully-loaded IdeaCentre Q180 compare to its competition? The Acer Aspire Revo 100 immediately springs to mind as an interesting alternative. Similar to the Q180, the £340 Revo is a nettop with some decent specs backing up its Athlon II Neo processor, 3D-compatible Blu-ray drive and mouse/keyboard remote. 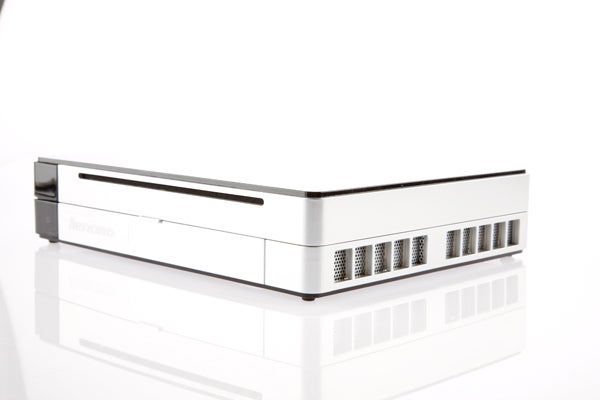 However, while it’s arguably more attractive and its CPU/GPU matches up, the Acer gives you less RAM, a smaller hard drive, and a remote that might be nicer for pointer control but is far less pleasant to type with. Considering the Q180 is brand-new while the Revo 100 is end-of-life, Lenovo’s nettop is even better value. 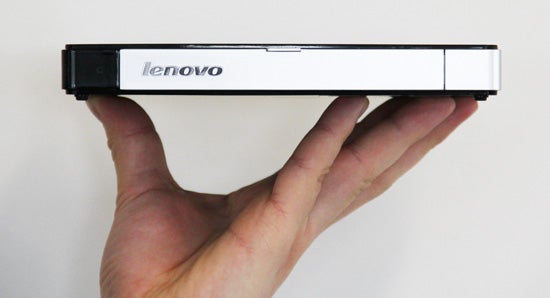 If your main interest is watching Blu-rays, we would probably recommend a dedicated player or £150 PlayStation 3. However, if you want the versatility of a tiny PC, you’re only paying £40 extra over the DVD version of the Q180, and overall it’s a decent machine for an affordable price.

Verdict
The Lenovo IdeaCentre Q180 is as tiny and cute as its title of “world’s smallest fully functional desktop PC” would suggest, but doesn’t compromise on features or connectivity. It’s not the most stylish nettop around but is well-constructed and well-specified, and its detachable Blu-ray drive is a nifty addition. Performance is constrained by its Atom processor but adequate for daily productivity, casual gaming and watching HD video. Best of all is the bundled keyboard/mouse remote, which is one of the better examples we’ve seen and can be used with any device that will accept a USB RF dongle. Frankly, all this for £350 seems a pretty good deal.