While we were arguing about whether a 7-inch tablet is better than a 10-inch one, Lenovo has been working on something quite different. The Lenovo IdeaCentre Horizon Table PC is a 27-inch 1080p touchscreen Windows 8 computer  that wants to become the centre of a family’s computing needs.

With a 27-inch screen, the Lenovo IdeaCentre Horizon Table isn’t a gadget you’ll be carrying around happily in one hand. Its 11kg weight ensures this is a two-handed job, and something you’ll only want to lug short distances – from the kitchen to the lounge, perhaps. It’s not super-slim, either, needing to pack in all the internals of a full-size computer, cooling vents and fans on top. Still, we expect future iterations of this idea will slim down significantly. 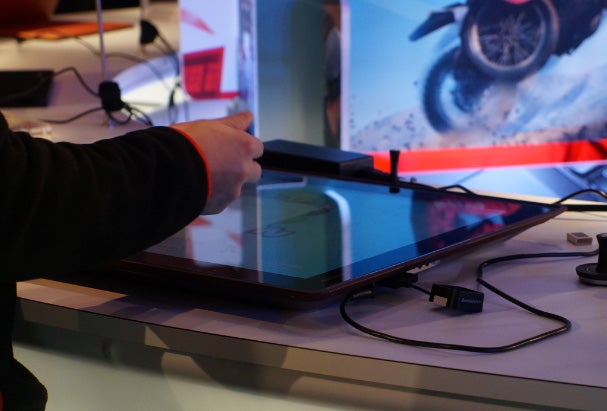 The Lenovo IdeaCentre Horizon Table does have the crucial tablet portability factor, because it features an internal battery. This is only rated for two hours of use though, making this a PC to move between a few “stations” in your house.

With a kickstand on the rear, the Lenovo IdeaCentre Horizon Table can stand up by itself on most flat surfaces, but Lenovo also showed-off a dedicated metal stand at the CES 2013 tech show. This holds the computer a few feet up in the air, and lets you switch between using the PC upright or flat in its “table” mode with little more than a push on the thing. 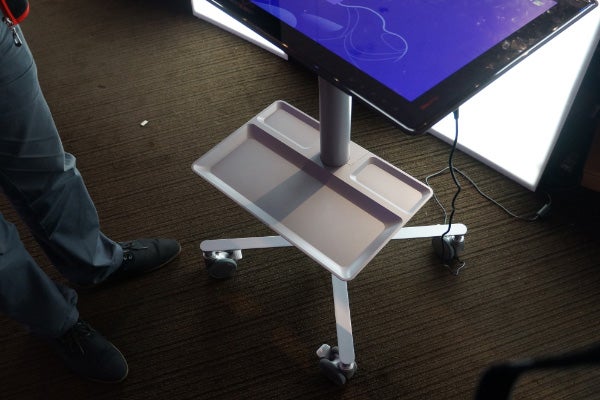 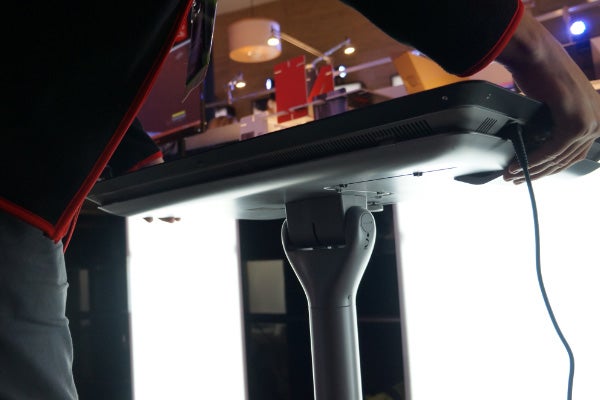 There’s more to just an angle than these two setups, too. There’s an accelerometer within the Lenovo IdeaCentre Horizon Table, and once it senses the PC has been laid flat it switches from the standard Windows 8 interface to a custom UI called Aura. This is a simple and friendly media browser that lets you flick through videos, music and pics with the 27-inch touchscreen. Fast and effective? No, but the kids will love it. 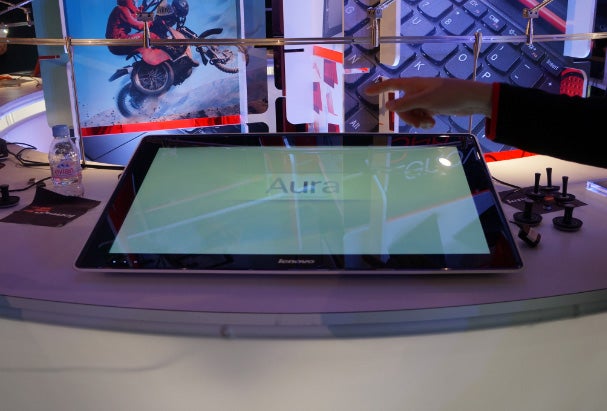 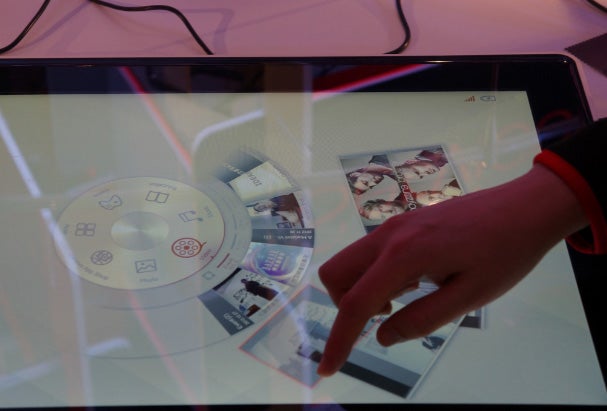 They’re sure to love the Lenovo IdeaCentre Horizon Table’s accessories too. As the PC has a 10-point multi-touch capacitive touchscreen, multiple people can use the touchscreen as a set of game controllers, and that’s where the capacitive joystick and electronic dice come in. 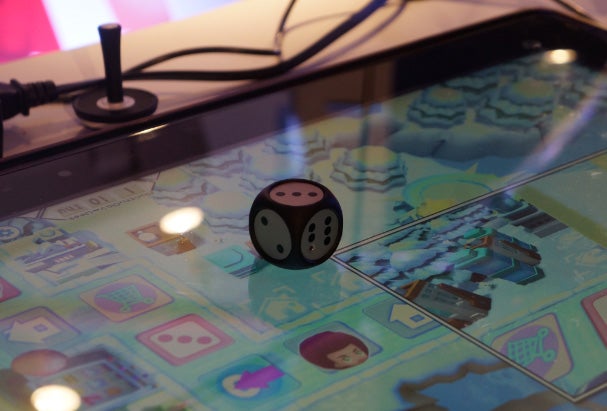 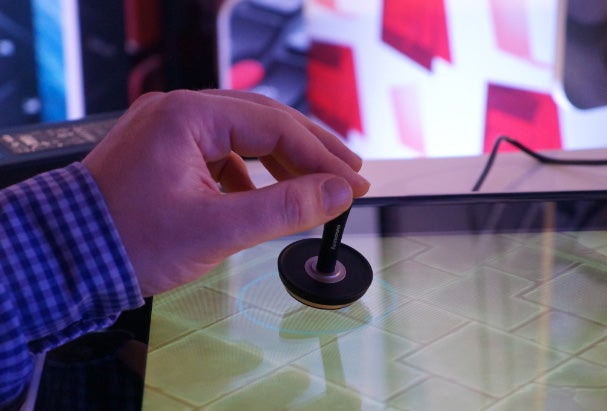 Lenovo says the  IdeaCentre Horizon Table will have access to its own app store of games at launch, and we got to see an air hockey game, a twin-stick shooter and a Monopoly-a-like board game in action. The capacitive joystick and airhockey controller use capacitive pads to act as controllers, the joystick sticking to the screen’s glass surface with a suction cup. The electronic die needs to be a little cleverer, communicating the result of its roll to the Idea Centre Horizon Table over Bluetooth. 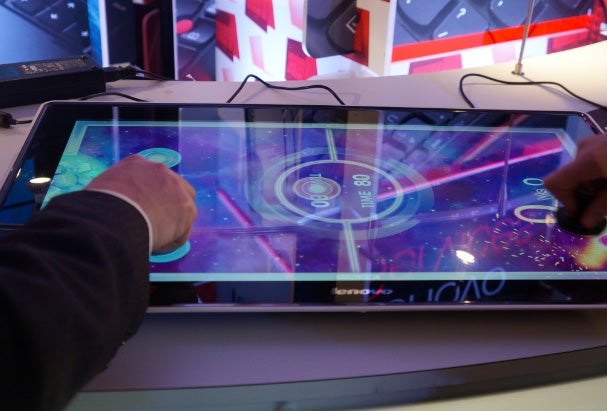 Technologically impressive? Not really, but bags of fun.

The Lenovo IdeaCentre Horizon Table isn’t a new concept, but it’s probably the most accessible execution of a design like this we’ve seen. Remember the Microsoft Surface table PC? In use it had much of the feel as the Lenovo Table, but was prohibitively expensive. 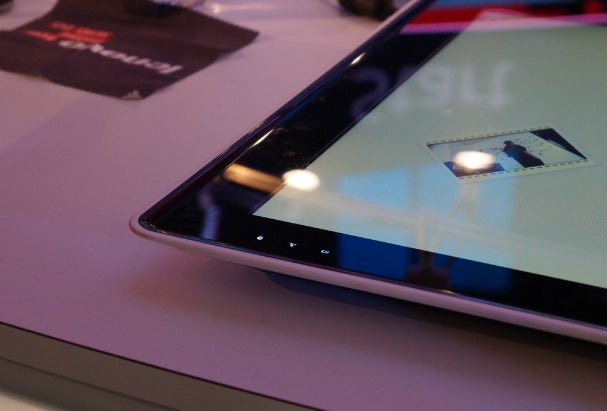 The initial spec model of the Lenovo IdeaCentre Horizon Table will cost a cool $1700, but the company says it’s likely to be able to produce a version that retails for under $1000. A £700-800 27-inch touchscreen PC with tablet elements and a good quality display sounds like a decent deal to us.

Lenovo showed-off a higher-spec version at CES 2013, where we saw the PC, though. It featured a Core i7 processor, SSD and Nvidia GeForce GT620M graphics card. The Lenovo IceaCentre Horizon Table will go on sale later this year. We’ll be back with UK availability details as they’re released.