What is the Lenovo Ideacentre AIO 910?

How an all-in-one computer looks and feels is almost as important as its raw specs and the quality of the screen. After all, these types of computer sit out on display, so they need to look as good as they perform. It’s good to see PC manufacturers acknowledge this, with a spate of good-looking all-in-one computers hitting the market.

The latest is the Lenovo Ideacentre AIO 910, which combines an attractive case and speedy components with a smart stand that lets you lay the screen parallel with your desk, making the touchscreen easier to use.

Lenovo continues its impressive run with another great-looking all-in-one. The case is of a metal-effect plastic, but the quality is high, and you’ll be hard-pushed to distinguish the finish from true metal using sight alone.

Rather than building the components into the main unit, Lenovo has fitted them into a stylish base. It means that the screen is impressively slim and the ports easy to reach; you don’t have to spin the entire computer around to get to them, as you do with an iMac. The minor downside is that the PC takes up a little more space on your desk, measuring 238 x 616 x 490mm

At the rear of the computer you’ll find the power connection, Gigabit Ethernet (802.11ac Wi-Fi is also available), 3.5mm headset jack, and a single USB 3.0 port. This USB port is taken up by the wireless keyboard and mouse’s dongle. This is frustrating; I’d have preferred Lenovo to have used a Bluetooth set instead. 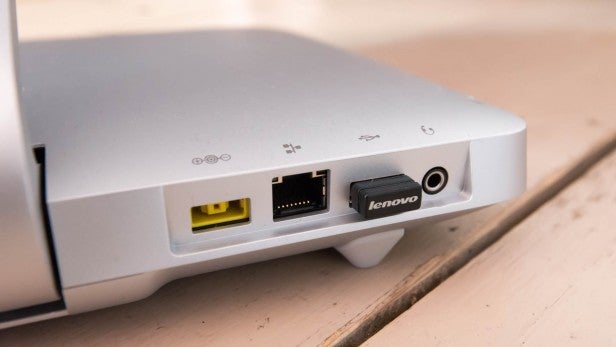 On the side of the case are an HDMI input, three USB 3.0 ports and a card reader. Although Lenovo’s website states that this is an SD card reader, it isn’t: the small slot is for microSD cards only. Digital camera owners will be disappointed; a full-size SD card slot would have been better. 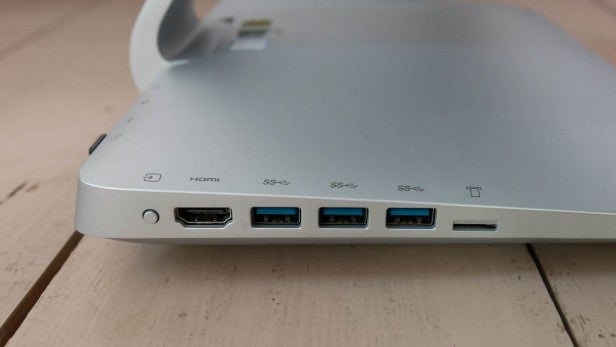 It’s the smart stand that will really grab your attention, since it lets you move the screen from an angle of -5 to 90 degrees. It’s rare to find an all-in-one with this level of adjustment, making it easy to line up the 910 comfortably, whether you’re using it normally or just with the touchscreen. 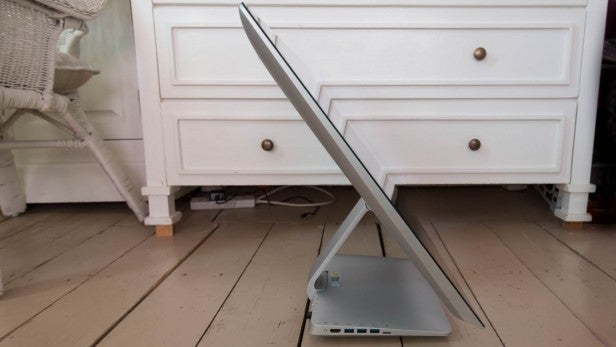 The keyboard remains one of the best bundled models I’ve used. While the keys are a little softer than on the best of Lenovo’s laptop models, they’re responsive and offer decent travel. Its half-width Return key is a little annoying, and I’d often hit PgUp by mistake. Still, once I got used to the keyboard, I found that I could type quickly and accurately. 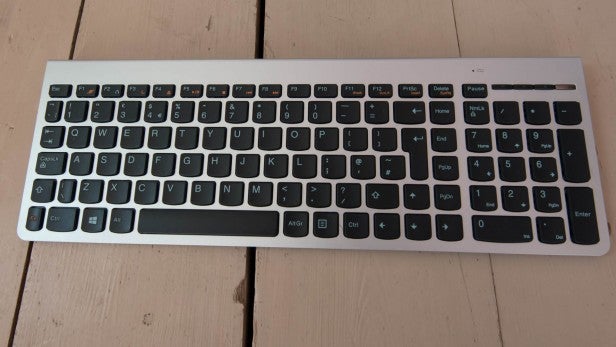 I don’t like the mouse very much, since its high arch isn’t comfortable to hold. To compensate, I ended up holding the mouse further down the body, which made reaching the slightly unresponsive buttons hard. 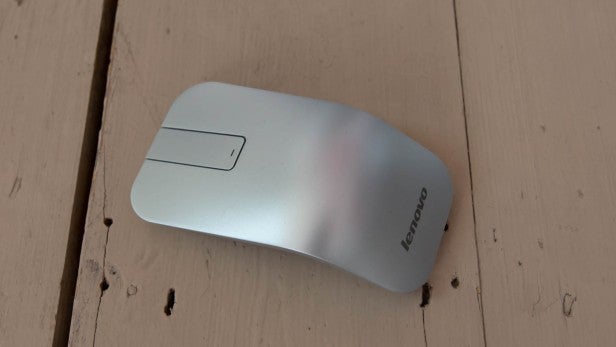 The glossy display is the highlight of the computer. This 27-inch, Ultra HD screen (3,840 x 2,160 pixels) has plenty of room for displaying multiple applications at once.

Image quality is superb, too. I measured the screen as able to produce 99.4% of the sRGB colour gamut. A black point of 0.295 nits gives you dark blacks, but 265 nits brightness is touch on the dim side. This results in a contrast ratio of 909:1, which is a touch low. In real-world terms, what you see on-screen is accurate, but you lose a little punch and vibrancy.

With the HDMI input, you can even plug in other devices. I was told by Lenovo that HDMI 2.0 (HDCP 2.2) is used, but plugging in a Sky Q box running at Ultra HD didn’t work; plugging in a regular Full HD Blu-ray player worked properly, however. It’s a minor shame that 4K devices didn’t work with the display, although this probably isn’t a huge issue for a lot of people.

Lenovo has fitted a full touchscreen display. Normally, I’m not a huge fan of them in an all-in-one, since it’s a pain having to reach across the desk. With the 910’s smart stand, however, it’s easier to get the screen closer, making the touchscreen handy for swiping through photos and the like. 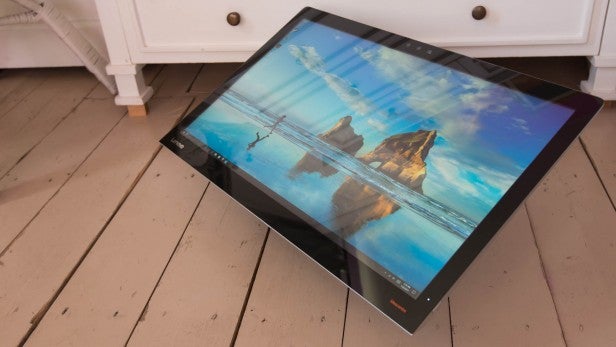 Lenovo’s Dolby Home Theatre-tuned speakers are excellent. Loud and powerful in both music and films, the 910 can provide room-filling audio. Bass is a little lacking, but that’s a minor complaint; ultimately, I’d see very little need to hook up a pair of external speakers to this computer.

An Intel RealSense 3D camera is mounted into the top of the 910’s screen. It works in a similar way to the Xbox Kinect, allowing you to control compatible apps using gestures. It’s more of a gimmick, and the range of supported apps isn’t particularly good. There is one useful feature, however: it supports Windows Hello, enabling you to unlock your computer with your face.

If you want to make video calls then the webcam shoots pretty good video, while the integrated microphone picked up my voice clearly.

Combined with 16GB of RAM, the Lenovo Ideacentre 910 managed a Geekbench Multi-core score of 7,940 and a PCMark 8 Home score of 2,879. This processor makes this all-in-one slightly faster than similar computers that use ultra-low-power CPUs; but, it’s around 28% slower than PCs with a full Core i5-6400 CPU.

General day-to-day tasks and photo editing are easy on this computer, but if you want a more powerful workhorse – for video 4K editing, for example – you probably want to look elsewhere.

While it can’t handle games at the screen’s full 4K resolution, Full HD gaming is more than possible. Dirt Rally managed an average frame rate of 28.64fps running at Ultra detail, but dropping detail down to Medium upped the frame rate to a smoother 53.5fps. Shadow of Mordor ran at a smooth 34fps, while GTA V ran at 42.2fps. That’s good news if you want an all-in-one that can handle games as well as work.

Lenovo has fitted a 128GB SSD and 1TB mechanical hard disk. The SSD is best used for Windows and general applications, but I recommend using the 1TB hard disk for games and file storage. Although the SSD isn’t one of the fastest I’ve seen (I measured read speeds of 512.8MB/sec and write speeds of 158.1MB/sec), it’s faster than a mechanical hard disk and makes Windows 10 feel responsive. 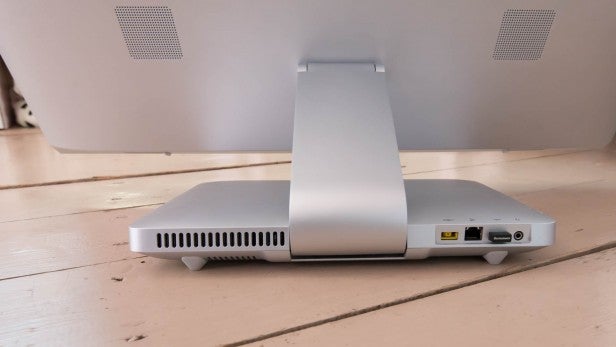 Cooling isn’t too intrusive, but even when idle, the Ideacentre AIO 910 makes a low-level hum from its constantly spinning fans. I’d prefer a silent computer when idle, but without ultra low-power components, this would have been a long shot with the AIO 910.

Note that the model on review here is one of the higher-end Ideacentre AIO 910s (F0C2000TUK), which has a 4K touchscreen and a quad-core Core i5 processor. The same spec is available with a Core i7 processor, too. A cheaper, Full HD non-touchscreen model is an option, too, featuring a choice of Core i5 and Core i7 processors, and graphics options vary by region and retailer, with some getting Nvidia 940M instead of 950A GPUs. The model on test here is most closely matched by this specification sold on Amazon at the time of writing.

Should I buy the Lenovo Ideacentre AIO 910?

It’s hard to find an all-in-one that can do everything, but the Lenovo IdeaCcentre AIO 910 fits the bill. It’s excellent 4K display, smart stand and dedicated graphics all make it a desirable and practical choice.

A low-power processor, noise when idle, and slightly slow SSD detract a little – but the AIO 910 will prove fast enough for most people’s needs.

A smart and flexible all-in-one computer – the Lenovo Ideacentre AIO 910 is a great all-rounder.