What is the Lenovo Explorer?

The Explorer is Lenovo’s first Windows Mixed Reality headset. It aims to offer an affordable, easier-to-set-up alternative to the more established virtual reality experiences offered by the HTC Vive and Oculus Rift.

Featuring sturdy build quality and being built to same stellar reference design as competing Windows Mixed Reality headsets, such as the Acer MR and Dell Visor, the Explorer is a great piece of hardware.

However, minor niggles with Microsoft’s Mixed Reality platform, coupled with incoming innovations like the HTC Vive Wireless Adapter, stop it from being a must-have purchase. 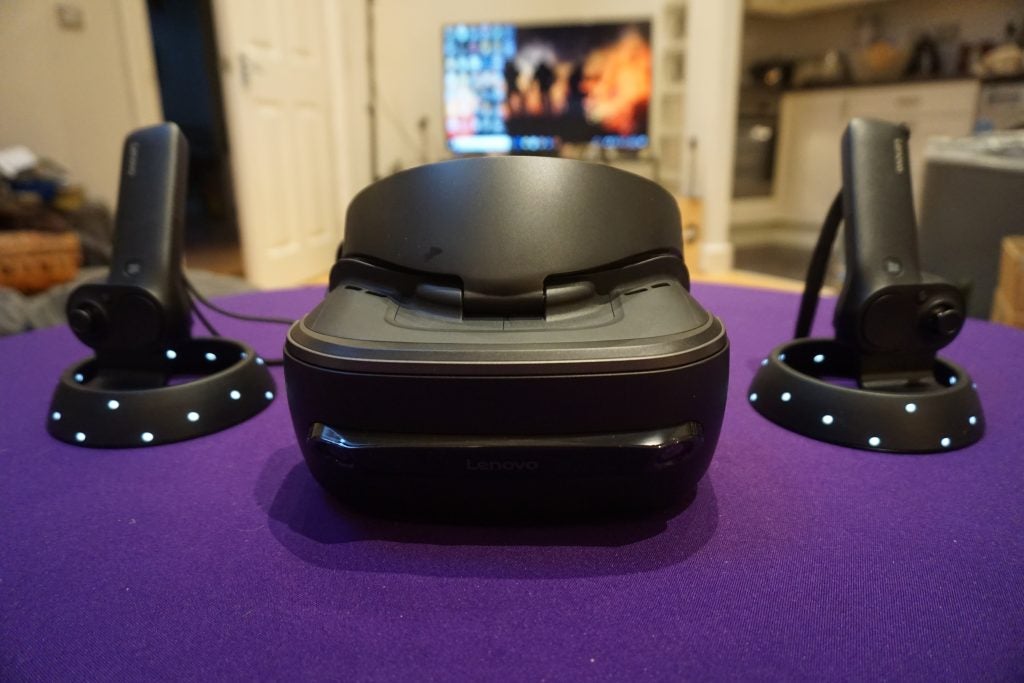 Visually the Explorer is pretty similar to the already established Oculus Rift and HTC Vive VR headsets, featuring a visor-shaped headset and touch controls that, from a distance, look all but identical to those for the Oculus Touch.

But look closely and you’ll notice a few small design differences. For starters, Lenovo’s made it so you can flip the headset’s visor up without taking it off. This may sound small, but it’s a welcome addition that makes it easy to quickly pop in and out of VR when someone asks you a question, or if you need to get your bearings during a heated gaming session.

The Explorer features the same 90Hz, twin 2.9-inch LCDs with a 110-degree field of view as most other Mixed Reality headsets. Like the Acer I’ve tested before, this means the graphics are sharp and the framerate wonderfully smooth and judder-free, which is an impressive achievement given the headset’s light weight.

My only slight quibble would be that colours don’t appear quite as vibrant and black levels aren’t quite as deep as on the Rift, which has twin OLED panels. Personally I’d have liked the Explorer to use OLED screens too, but few Windows headsets do so, outside of the Samsung HMD Odyssey, so LCD is hardly a deal breaker.

The only other issue I have with the Explorer’s design stems from its atypical strap design and the fact that it doesn’t come with headphones. Unlike on other headsets I’ve tested, the strap isn’t at all elasticated and instead uses a dial system like you’ll find on cycling helmets. While this leads to an ironclad fit that won’t break no matter how much you flail about, it also makes the Explorer slightly uncomfortable to wear for prolonged periods, even with the generous dab of padding Lenovo’s given it.

Like most other Windows headsets, the Explorer requires you to supply your own headphones and connect them using a 3.5mm jack. This might be a little thing, but I’ve always found it a big annoyance. Running through Trusted Reviews’ locker full of gaming headsets, it took me five attempts find a decent set that comfortably fit with the Explorer. 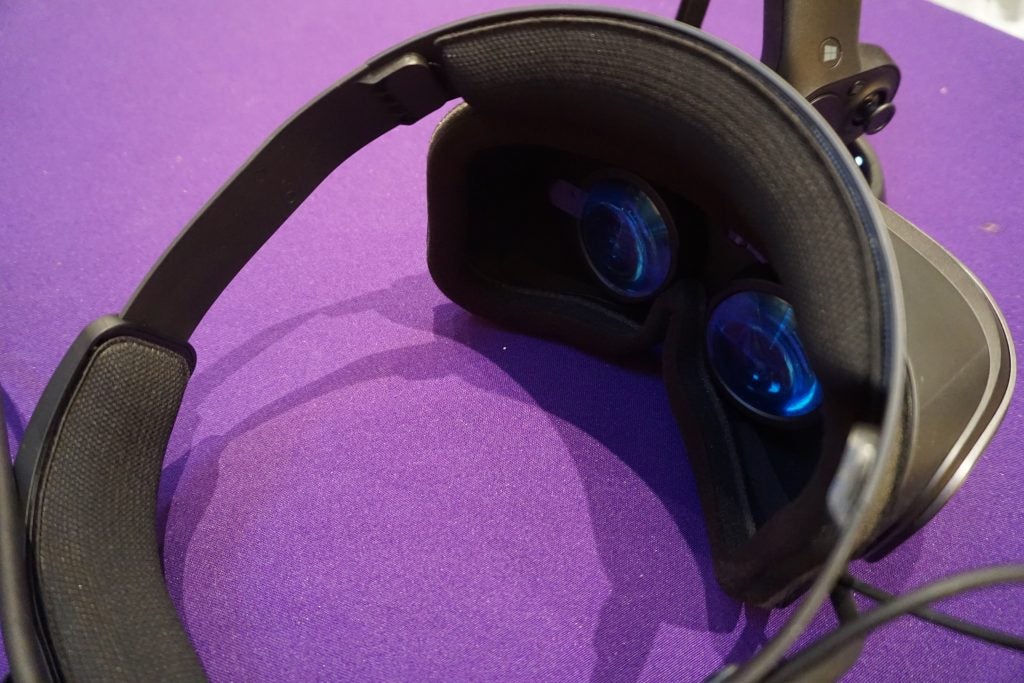 The biggest selling point for Windows Mixed Reality headsets is how easy they are to set up. Unlike the Oculus or Vive, Windows Mixed Reality headsets don’t require any external sensors to work. If you’re running the latest version of Windows 10, all you have to do is plug the Explorer into a single USB 3.0 and HDMI slot on a supported computer. From there you’ll just have to follow a series of on-screen commands and you’ll be up and running. The entire process only takes around 2-3 minutes.

Mapping the controllers is also fairly simple. All you have to do is load a set of AA batteries, power them on and once again follow a short series of commands to map out a ‘safe’ playzone in the room you’re using it.

Once mapped you’ll be launched into Windows Mixed Reality’s slightly weird VR world. Unlike competing VR platforms, which generally feature a single-pane-of-glass interface, Microsoft’s takes the form of a fake house-style environment. The idea is that you can ‘decorate’ each wall with the specific features and apps you want, throwing the virtual windows around with Minority Report-style motion controls.

How well the feature works is largely dependent on what spec your PC has. Though Windows Mixed Reality in theory can run on low-end machines with Integrated Graphics, I’ve found the experience can be a little choppy without a dGPU. The platform didn’t play nice with any integrated graphics system I tested it on. Both the Surface Pro and Asus Transformer 3 Pro, which meet minimum specs, ran the house OK. But any app outside of basic web browsers and video streaming service ran at sickening, chuddery pace well below the quoted 90fps.

Testing the Explorer on my gaming rig (GTX 980Ti, Skylake i7, 16GB RAM) things improved and the headset worked a treat. Outside of a few bugs that occasionally sent windows I was trying to grab flying into the sky, every Windows 10 VR game and app worked a treat with my rig and the Explorer.

The headset’s custom tracking system was also as impressive as ever. Like the Acer headset I tested last year, the Explorer features two front-facing cameras and IME sensors in the headset and controllers. The front cameras are used to scan the area around the wearer and then use the algorithms Microsoft originally created for HoloLens for location locking and positional tracking. 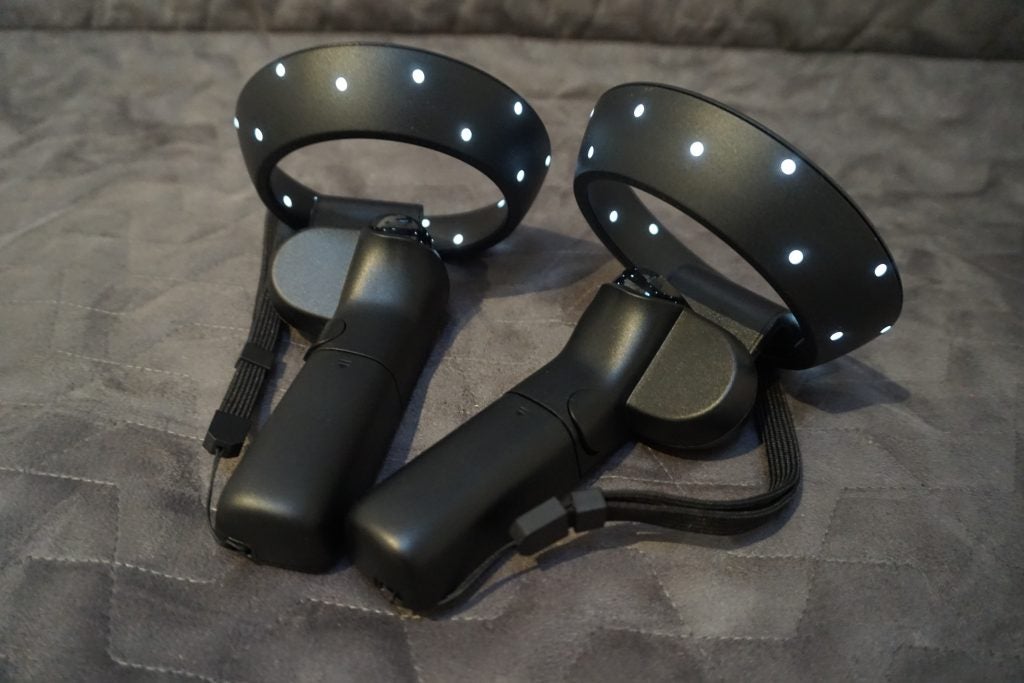 The IME sensors between the motion controls and headset then act as a fallback mechanism, should the headset ever lose the controller’s main position – say when you try to reach for something on your back in a game.

However, things quickly fell apart when I tried to use the headset with SteamVR. Windows Mixed Reality headsets should, in theory, work with SteamVR. This is an awesome idea, as it means you won’t have to rebuild your game library or split it between multiple ecosystems when using the Explorer. But, sadly, the latest Beta version of the platform I tested wasn’t in a playable state for Mixed Reality headsets.

The main UI worked fine, but the moment I powered up my first game I ran into issues. VR hack-and-slasher Trickster didn’t recognise the Explorer controller’s atypical button layout, which includes basic thumbsticks, two rear-facing triggers, menu and Windows buttons, and a touchpad on each. For some reason, the game confused all the buttons. The touchpad was treated like a joystick, the two triggers’ actions were reversed, and the menu button became a lucky-dip option that seemed to change what it did every five seconds.

Moving to Gunjack, which uses a basic Xbox One controller, the headset worked fine, but every game that require motion controls on SteamVR was pretty much unplayable with the Explorer. Given that the platform is in Beta, this isn’t too surprising, but it’s something gamers should be aware of before parting with their cash.

Being fair, these are all issues with Windows software that you’ll find on any Mixed Reality headset, not just the Explorer. Though it is yet another sign that buyers may want to wait a little longer before making the VR plunge, especially given the number of next-generation products we’re expecting to be launched this year. 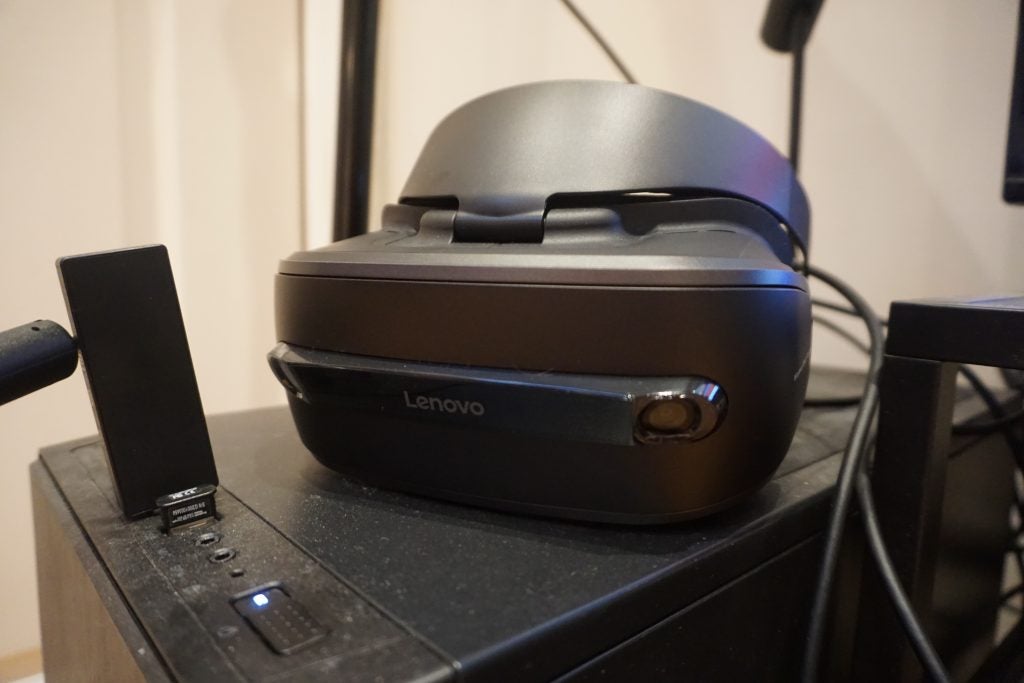 Why buy the Lenovo Explorer?

Outside of its slightly vice-like fit, the Lenovo Explorer is a fantastic piece of hardware that shows off just how good Microsoft’s Windows Mixed Reality platform could be.

It’s easy to set up, the optional motion controls are intelligent and easy to use, and the tracking is excellent. If you’re 100% committed to Windows Mixed Reality, or use the Windows Store for all your gaming needs, then you won’t be disappointed with the Lenovo Explorer.

The Lenovo Explorer is a great piece of hardware, partially let down by work-in-progress software.