When Lenovo acquired IBMs PC and laptop business many feared for the reputation and quality of the famed IBM ThinkPad brand. However, they ought to have feared not as Lenovo sensibly kept the ThinkPad brand going, and judging by our reviews the quality has stayed too.


The ThinkPad brand then retains the high-end while Lenovo reserves its own brand for its more affordable notebooks, much like this V100. As part of the 3000 range, the full title is the Lenovo 3000 V100, which is a little confusing. Firmly in the ultra-portable category, this notebook features a 12.1in widescreen display and weighs only 1.86Kg, yet has its optical drive built-in. 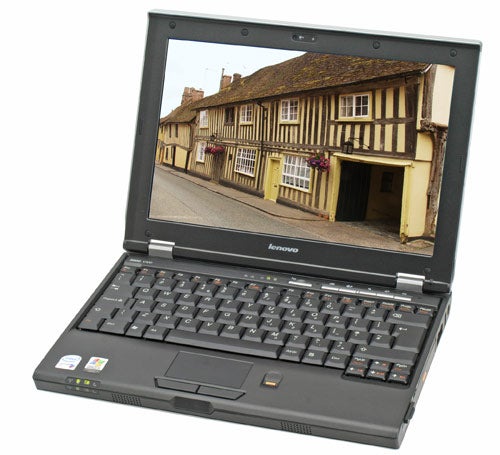 On first impression I was a little disappointed with the look of the notebook as the finish is nothing like the cool Darth Vader black of the Think Pad range. In particular the pads inside the overly thick bezel round the screen look a bit cheap. Build quality isn’t fantastic. There’s too much flex in the screen, the mouse buttons feel very plasticky and the volume up key at the top right above the keyboard was pressed down and no longer flush with the others next to it, though it did still work.


Of course, the ThinkPad’s Imperial chic is expensive and this V100 brings much of the ThinkPad’s traits to those of less capacious pockets. What it doesn’t have is the hard disk protection that the ThinkPad’s offer, so if someone picks up your notebook and chucks it on the floor it’s likely to get damaged. So don’t let them do that. 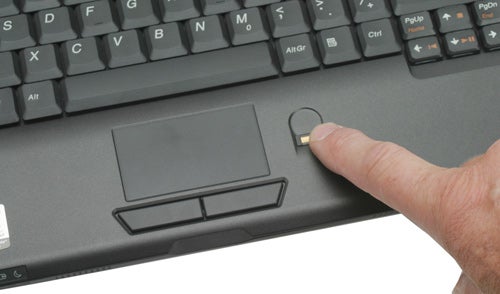 What it does carry over are the keyboard and the fingerprint reader. The keyboard is actually one of the best I’ve ever used on a notebook. It’s distinguished by being particularly firm with a short travel, and I was able to get my typing speed up quite high while retaining accuracy. In terms of layout, you’re rewarded with a full size return; backspace and right shift keys and numerous functions are available via a function key in the bottom left.


The display uses a high contrast coating for richer colours, but this made it harder to read under the office lights, so I had to angle it to compensate. The choice of angle is restricted though as the vertical viewing angles are quite restricted. It’s better to the sides though. The screen resolution is 1,280 x 800, which is about right for a screen this size. 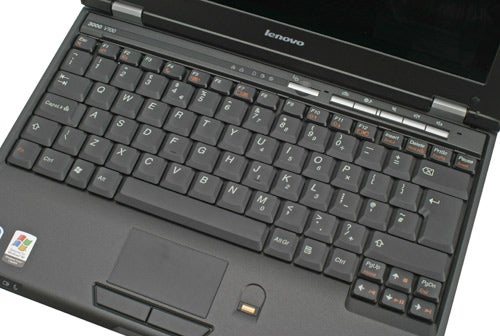 In the middle of the bezel in the top of the screen is a integrated webcam, which is very useful for videoconferencing on the move, or keeping in touch with home. Though the lens is small the image quality is actually very good. However, I would have preferred to see one that could rotate rather than having to move the screen up and down to get the right angle.


The trackpad is on the small side but does the job, but the mouse keys have a wobbly and slightly flimsy feel to them. To the right of this is a fingerprint reader. This is a technology that has been carried over from IBM’s ThinkPad range. Once you’ve enrolled your fingers you can use a swipe to login, rather than typing your name, which is hardly a big deal. More potentially useful is the ability of the Omnipass software to detect password fields and offer to remember them for you so you can enter secure web sites without having to remember usernames and passwords – a swipe will do it instead.


Also on the right are the 56k modem, and the Fast Ethernet port. It’s a sign of the times that I’m actually surprised that Gigabit Ethernet isn’t supplied. There’s a dual-layer DVD burner drive included and above this is a on/off switch for the Wi-Fi and Bluetooth. Next to this is the multi-card reader. The arrangement of this all is quite compact, which might bother the fat fingered, but that’s what you get with an ultra-portable. 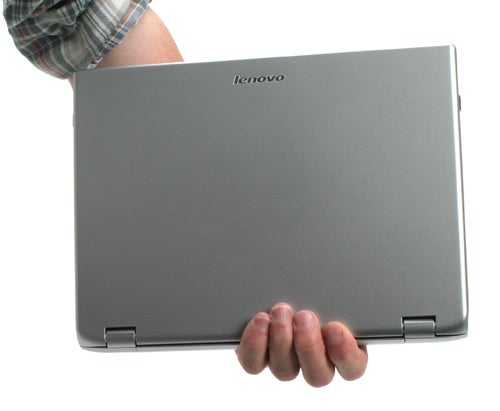 On the left-hand side is a VGA output, handy for presentations and the audio ports. There’s also a mini-FireWire port. Above this is an Express card slot. One could view this as forward thinking, but the fact is that one of the the most useful additions right now is a 3G data card, and these aren’t yet available in Express card format. The only port on the rear is a single USB port.


On the left you’ll also find the grille output for the CPU heatsink, but I found that the notebook ran pretty quietly and didn’t get overly warm after prolonged use. This is no doubt largely due to the heat efficient Core Duo T2400 processor. There’s a Gig of RAM running in dual-channel mode but there’s no room for any extra without changing the modules. 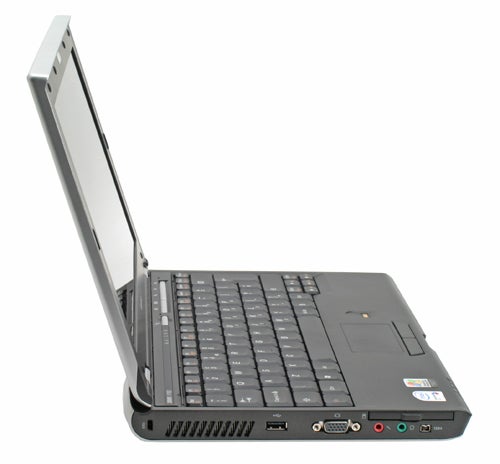 So how did this little mini marvel perform? For comparison I choose the similarly specced Samsung Q35, which is also around the same price. The Lenovo has a faster CPU to the Samsung review sample and did outpace it in SYSmark 2002 and in PC Mark 05. However, the Samsung should now be available with the same CPU as the Lenovo V100 but at the same price. This is all well and good, but when it came to battery life the Lenovo got well and truly pasted by the Samsung.


Of course the Samsung had a six cell battery with it, whereas the one included in the Lenovo is only a three cell. The larger one on the Samsung sticks out of the rear but it’s more than worth it. The 94 minutes of DVD playback from the Lenovo was truly poor and in all honesty, there’s little point in a notebook being ultra portable if it won’t last you long out in the field. A six cell battery should be available from Lenovo as an extra and we’d only consider this notebook with one. 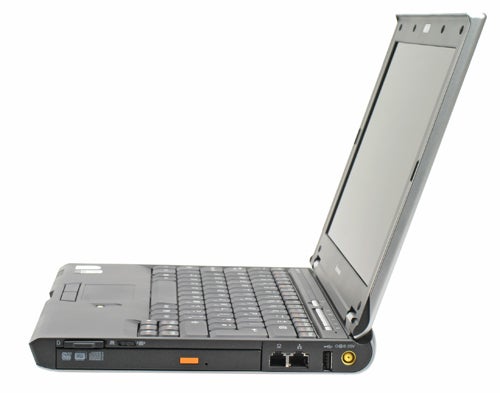 Aside from this the Samsung is a more stylish overall package but the excellent keyboard and the web cam may sway some towards the Lenovo.


In addition the Lenovo also carries with it the excellent IBM ThinkVantage recovery software on a hidden partition. I had occasion to use this when our normal recovery routine didn’t work. The process took a very long time to get back to the factory default setting but it worked very well and is a great safety option should your installation get messed up. What’s more, it’s great not to having to worry about hunting round to find recovery CDs.


At first glance the V100 suffers for looks and build quality compared to a genuine ThinkPad. However it does bring many ThinkPad features to a more affordable price point. I wouldn’t consider it though unless it’s paired with an extended battery as the standard one is far too weedy. 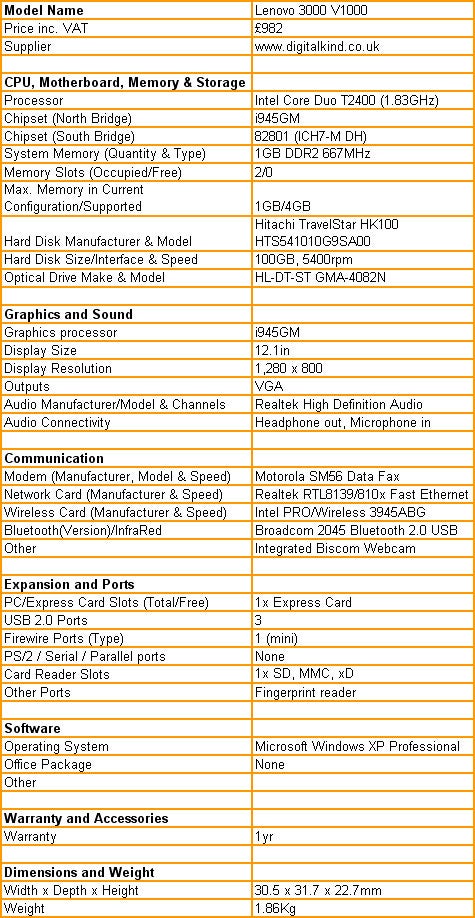