The last Lenovo notebook we looked at was the N100, that Spode reviewed back in September. It was a cheap, chunky and cheerful alternative to the more exclusive ThinkPad range, that Lenovo also produce, and it impressed us enough to gain a recommended award. However, if you want something with a bit more oomph the N100 has a bigger brother, the uncannily named N200. 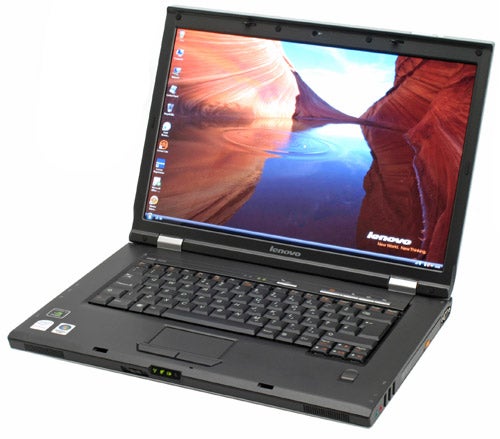 In the time since Spode reviewed the N100, Vista has been released, Intel has released a new set of mobile processors and overall the industry has advanced. So, accordingly, Lenovo has updated its entire N-series.


The N100 series now comes with Windows Vista as standard, a minimum of 1GB of RAM (which you’ll need for running Vista), and a larger 120GB hard drive. There are also new CPU options with the Intel Core 2 Duo T5300 being the best of the bunch. The basic chassis design and 15.4in 1,280 x 800 resolution screen remain from the previous version.


The N200, then, takes over from where the N100 series leaves off with a high resolution 1,680 x 1,050 15.4in display being its prime asset. This is backed up by nVidia GeForce Go 7300 graphics, up to 4GB of RAM, and faster Intel Core 2 Duo T7100 and T7300 CPUs. These new CPUs are the super duper power saving ones that form part of the Santa Rosa Centrino platform. Unfortunately, they aren’t accompanied by Turbo Memory, Gigabit Ethernet or Draft-n wireless so you’ll not get the full Santa Rosa experience. The particular model I’m looking at today has an Intel Core 2 Duo T7300 running at 2.00GHz coupled with 1GB of RAM and a 120GB hard drive. This particular specification wasn’t available on Lenovo’s website and they don’t cater for much customisation so the closest matches we could find were the TY2B4UK and TY2B3IV models which have slightly different memory and CPU configurations.

One thing that hasn’t changed since last year is the overall design of the N-series chassis. With dimensions of 360mm x 267mm x 31.4mm and weighing in at 2.8kg it is exactly the same size and weight as its predecessor, which is about average for this type of notebook. The colour scheme also sticks to the tried and tested silver and slate combination with the former adorning the outside and the latter blanketing the inside. As a business oriented model I wouldn’t hold this staid look against the N200 but it doesn’t do anything to make it stand out from the crowd either.


The N200s business credentials are further emphasised by the inclusion of a fingerprint scanner below and to the right of the keyboard. This works in conjunction with preloaded software enabling you to swipe your finger to log into Windows or enter a password on a website. For someone like me, that has used the same few passwords for years, this seem like overkill but if you’re company policy is to regularly change passwords they can save a lot of support calls about forgotten passwords.

Like many notebooks of this price the keyboard on the N200 is best described as sufficient. The keys are a decent size and are quite responsive giving you just enough feedback to enable rapid touch typing. Overall it doesn’t compare to the legendary keyboards found on the more expensive ThinkPad models but it’s not a complete dog either. The one real stinker that Lenovo has trodden in is the old problem of the left Ctrl key being displaced by the Fn key, in the bottom left corner. This detracts from an otherwise perfect layout which is rather a shame.

Vanilla Lenovo notebooks don’t have the TrackPoint that ThinkPads continue to use, instead they rely on just a trackpad. I know some people prefer to use ‘the red nipple’ but trackpads are now ubiquitous so saving some money by dropping the TrackPoint makes sense. The tracking surface is a pleasure to use giving good accurate response. Unfortunately, the same can’t be said for the corresponding buttons. They are so stodgy that Riyad proclaimed pressing them is like putting your finger in jelly and I wouldn’t disagree. 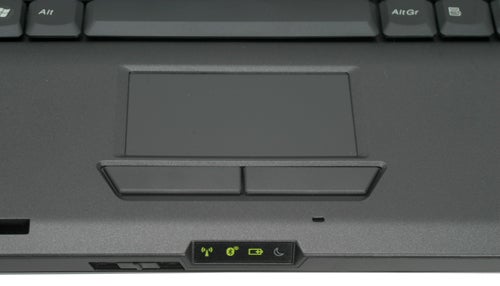 Above the keyboard are five silver buttons for controlling power, turning volume on/off, up and down, and accessing the Lenovo care facilities. The first four buttons are self explanatory but the last one may need some elaboration. Pressing this at boot up will enter the ThinkVantage suite where you can perform backup and system restore operations, map network drives, run a diagnostic utility or even access a web browser. You can also access most of these features from inside Windows by pressing the same button. The great thing about ThinkVantage is that a systems administrator can configure workers’ notebooks to backup every time they connect to the company network, thus ensuring that there is a regular snapshot of everyone’s notebook, without the end users even knowing it’s happening. 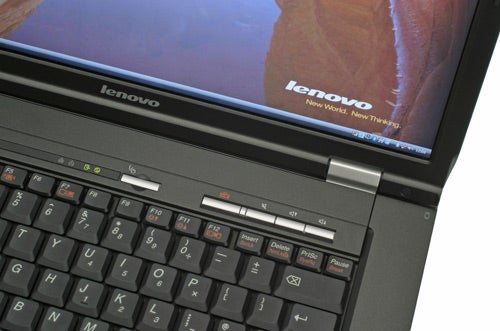 Around the edges of the chassis are convenient little icons that indicate the position of the various ports – useful for preventing excessive fumbling in front of a client. On a more stylish notebook these might ruin its sleek look but for a business oriented device, where ease of use is paramount, they make a lot of sense.


Along the left edge is a single USB port, a four pin (mini) IEEE.1394 Firewire port, a 10/100 Ethernet port, an Express Card slot, a 5-in-1 Multi-card Reader (SD/MMC/XD/MS/MS Pro), and a securing point for attaching a notebook lock. The positioning of the multi-card reader below the Express Card slot may result in it being blocked if a particularly large expansion card is used but otherwise this layout seems sensible enough.

The front edge houses a small panel containing three LEDs for indicating sleep status, hard drive activity, Bluetooth status, and wireless status. To its left is a switch for turning the wireless connections on and off. There is only one switch for both though, which is slightly inconvenient because it means you need to fiddle about in Windows to control these independently. As I mentioned above, the WiFi is not draft-n but does conform to a/b/g standards so you’re good for casual browsing, emailing and small file transfers.

On the right side you’ll find three further USB ports, two 3.5mm jack sockets for a microphone and headphones, a 24x dual-layer multi-format DVD rewriteable drive, and a VGA port. Again, nothing too spectacular here, it’s just ticking all the boxes. A 1.3 megapixel webcam sits above the screen where its just right for video calling. Rounding things out, a 56k Modem and S-Video socket can be found along with the power socket on the back of the hinge.

So, all pretty standard stuff so far but what really sets the N200 apart from its baby brother is its superb screen. In fact I’m racking my brains to recall a better display on a notebook of this calibre.


Not only do you get the added real estate that a screen with a resolution of 1,680 x 1,050 provides, all the other elements of a good screen have also been taken care of. Brightness and contrast are on a par with much more expensive LED backlit screens and the backlighting is perfectly even without a hint of bleeding. Colours are accurate and balanced if ever so slightly subdued. And, not to let the side down, viewing angles are incredible.

In case you were wondering just what those extra pixels do get you, a 1,680 x 1,050 screen will enable you to view two A4 documents at 100 percent zoom side by side. Of course everything is smaller on screen so if you like to have big chunky icons and always make your windows fullscreen then you may be better off saving some money and going for the N100.


In everyday use, the N200 is more than capable and the nVidia graphics card is even able to play some rudimentary games, like the Sims 2 or World Of Warcraft. However, with nVidia’s Direct X 10 compatible 8400 and 8600 graphics chips now available, there are considerably better options out there in terms of graphics. Also, if you plan to use this as a portable workstation you will definitely want to upgrade the memory to 2GB to prevent things grinding to a halt. 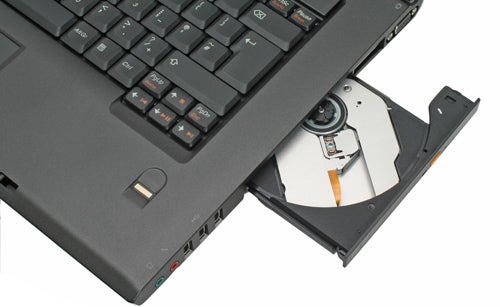 Our custom 2D benchmarks didn’t reveal any unexpected chinks in the N200s armour though PCMark05 was a little less forgiving with the Acer Aspire 5920 once again proving it is a brilliant performer for the money.


Lenovo preloads its notebooks with plenty of software including Norton anti-virus with 90-days free virus definition upgrades, Intervideo WinDVD, Roxio Digital Media Basic, Diskeeper, and the aforementioned ThankVantage suite. I tend to uninstall all these and start from afresh when I buy a notebook but if you’re looking to get going straight out the box, this lot should cover most of your needs. 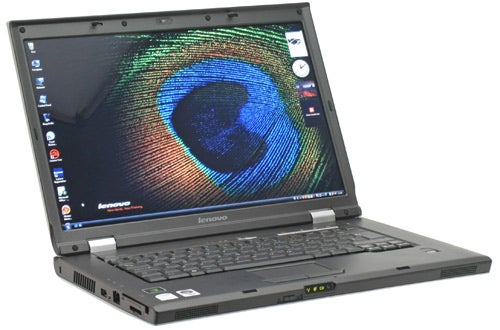 For battery testing we are still relying on subjective testing until we find a battery rundown test we’re happy with. On this occasion I copied a 711MB video file over the wireless then watched it for an hour and 20 minutes with brightness forced on full, after which there was about 40 per cent battery left. Recharging the battery and carrying out a number of everyday email, web browsing and word processing tasks, again with the screen on full brightness, the battery lasted for 142 minutes which is less than I would have hoped for. However, by using a few power saving measures I’m sure this could be increased by a decent margin.


The Lenovo 3000 N200 is good business all-rounder with plenty of horsepower and a superb screen that will be perfect for mobile graphics presentations. Moreover, the inclusion of Lenovo’s ThinkVantage applications makes it an easy drop in solution for company’s setup with these facilities.