Without a doubt, Lenovo has one of the simplest, but also one of the most confusing naming conventions on the planet. Not too long ago we looked at the 3000 C100, the desktop 3000 J100 and then the ultra portable 3000 V100. Can you see the pattern?


Obviously, there are sub-codes in the product name, but even as an overall product series it’s confusing. Today we are looking at the Lenovo 3000 N100. Finding this model with the same specifications are our review model proved difficult as there are several models based on the same chassis. Some will have faster processors, less memory or different graphics chips. So remember to look out for the exact details when shopping. The model we had in to review is closest to the TY04HXX. 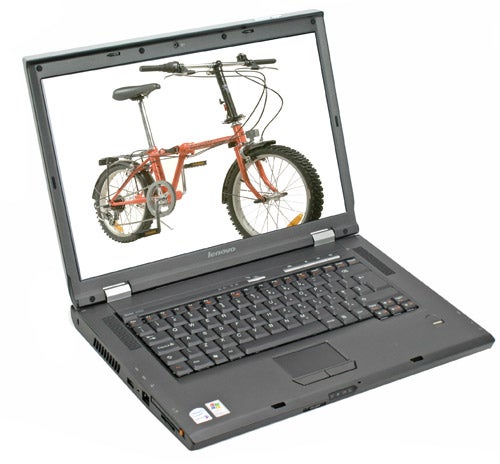 The first thing that struck me about the chassis was that on the top there are icons at the sides indicating where each port is. This is really useful as you aren’t left fumbling around looking for a USB port. If in doubt, look on the left hand side, where you will find a single USB port, FireWire, Ethernet, a PC Card slot and an SD Card reader. On the right hand side are another three USB ports and audio connectivity. At the rear of the right panel is a D-SUB connection, and at the back there is an S-Video output too for connecting to a TV. 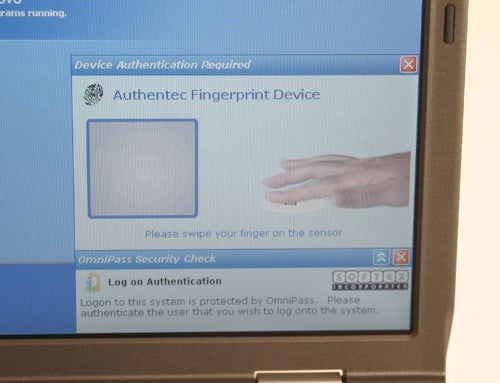 You’ll also find a fingerprint scanner on the device. There is an excellent wizard that guides you through using this when you first boot up the machine, making sure your computer is password protected. Upon using the right fingerprint, it basically takes this password out of storage and logs in for you. If you wanted to, if you perhaps lost your fingers, or wanted to give someone access over the phone, you can access the machine using just your password. This is quite cool as you can just run your finger across the machine to log in, but I’ve survived the last few years typing passwords in, so I’m sure I could last a few more. 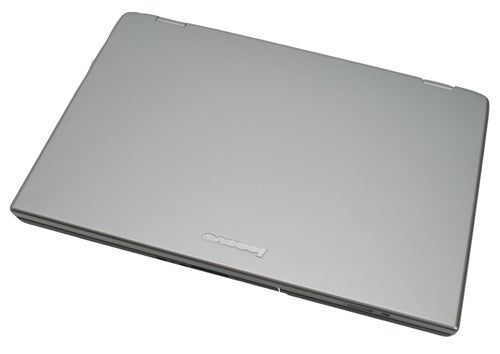 The lid of the notebook is in an attractive silver than contrasts the dark grey quite nicely. If I was to choose a word to describe this chassis it would be “inoffensive”. It is however, nicely laid out. At 2.8Kg it’s not exactly ultra-portable, but it’s an average weight for a notebook of this price. 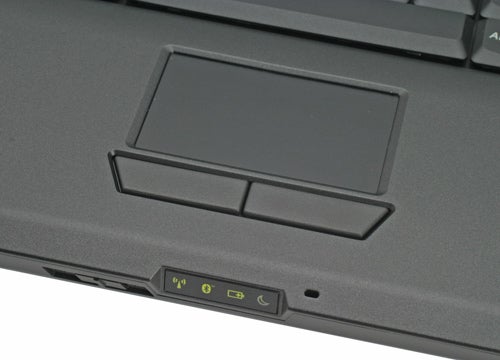 The trackpad is lovely to use, which I find increasingly rare on notebooks and I have a general preference for the ThinkPad TrackPoint (or red nipple to those less product savvy). The keyboard is also nice to use and I feel that I could type on it for an extended period. The overall feel is that this would make for a great office notebook. 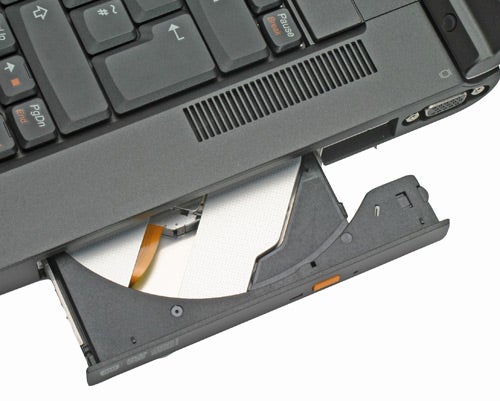 Included is an 8x DVD Burner, which will probably never get used – but nice to know it’s there.


Inside, things are just as well thought out. First of all, we have a T2300E Core Duo, which is the slightly cheaper version of the T2300 that doesn’t support virtualization. It’s not a Core 2 Duo, but these are still premium products. For those who don’t know, the T2300E runs at 1.66GHz and is a capable processor that currently offers great value for money. We’d sooner see the 1.83GHz T2400 in there as this only costs a little more – and if you look around I’m sure you can find this is an upgrade for little extra.


Our particular model came with a single 1GB module installed, but most of the models we found advertised only had 512MB installed. We’d highly recommend getting 1GB of memory, if not 2GB! So be aware that our results will be slightly higher than that of a regular unit.


There is an 80GB hard drive, which is plenty of storage space, and an nVidia 7300 Go graphics chip. This will offer better D-SUB output than the standard onboard graphics provide, but will more than likely get slightly less battery life. A 7300 is enough to get some very basic gaming done, but not much. We’d sooner just go with the onboard graphics and get the reduction in price and increase in battery life.

Lenovo include a lot of software as standard and its recovery suite is excellent for doing regular backups or restoring to factory defaults. Personally, I go straight to add/remove and get rid of most of it. The system tray is absolutely a chocker with icons and it’s hard to find what’s important. Although it’s nice to Norton Internet Security included, I’d sooner be using AVG Anti-Virus.


There is no office application provided, but since my move to Linux recently, I’ve been getting to grips with OpenOffice instead and it’s absolutely superb, and naturally free. 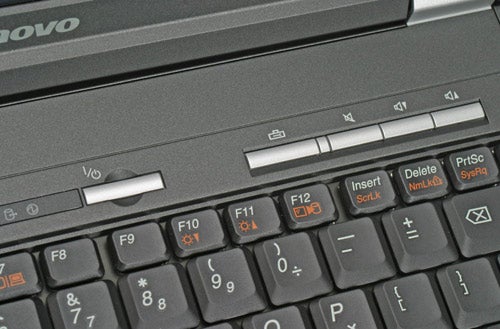 Performance on this system was fine, almost keeping up with the previously reviewed and similarly specced Zepto Znote 6214W. What let it down was slightly slower hard drive performance, that is more than likely the cause for it’s slightly lower SYSmark score.


Battery life was a little better at 162 minutes, which is more than enough considering its weight. If you need longer and if you were expecting to be using a notebook on the go for more than three hours a day, you’d consider getting an ultra portable.


This notebook is a good performer in a decent chassis. Although £537.98 is for the version with integrated graphics and only 512MB of memory, this can’t be far off and that’s amazing value for money. Unless you are intending on being on the move a lot, this is well worth considering.