Tablets are a fantastic magazine-reading medium. Vibrant screens, responsive touch navigation and the ability to jam in rich media content such as video and animation makes us feel a little less sad about the ongoing decline of “proper” paper mags. Lekiosk is an app that lets you buy and read magazines on your iPhone, iPad, or Android device.

The Basics
We checked Lekiosk out on an iPad, where it has to do battle with the impressive collection of mags available through Apple’s own store. Lekiosk’s first stab at making its own mark is obvious as soon as you first boot the thing up.

The app’s home screen is a 3D modelled magazine stand, which rotates to give you access to four sets of virtual shelves of magazines. It looks dead snazzy and helps to give Lekiosk a bit of visual personality. 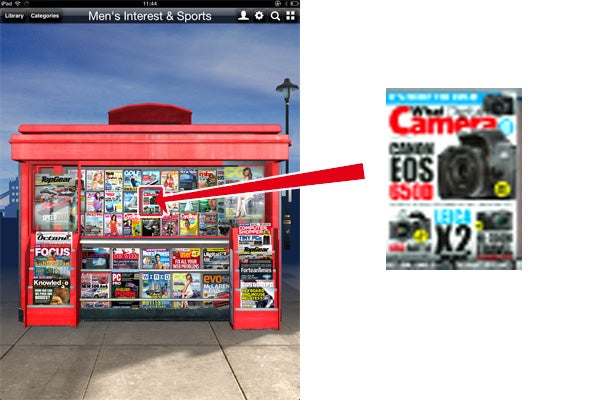 Is it practical, though? Not really. After you’ve gotten over the visual novelty of the magazine racks, you’ll soon discover that this is a most unhelpful way to search for things to read. Each set of shelves is split into a loose genre, but the magazine covers are too small to see much beyond the mag’s title and it’s often not all that easy to find the exact magazine you’re after. On anything but a super-quick connection, it takes a while to load too, having to pull down each magazine cover separately.

After a short while, we switched to the simpler cover view. This fits nine covers onscreen at once, displaying them as a long flick-friendly scroll. You can filter them by women’s interest, men’s interest or entertainment. 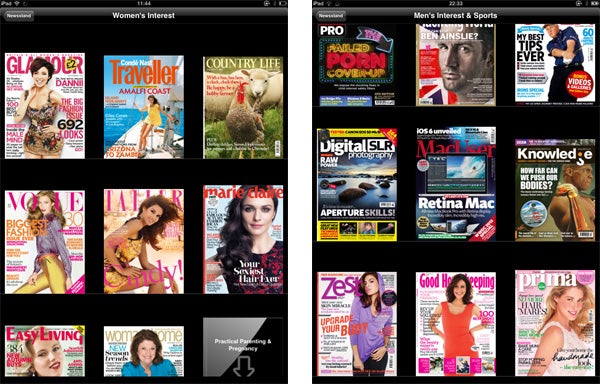 The selection is, predictably, not a patch on what you can get from iTunes. As you might guess from the name, Lekiosk started out in France and is just now starting to bleed out into other countries. There’s a claimed 90 UK magazines available, although from our count it seemed to be closer to 50.

Plenty of top-quality titles are in there, though, from tech publications like Wired and What Digital Camera to lifestyle/fashion, with GQ and Vogue, and sport. If you want small run left-field publications, you won’t find them here, but Lekiosk offers a pretty good approximation of a smaller WHSmith shop’s selection. Buy a magazine and it sits in the library, which is a simple iBooks-like shelf. No 3D panning here, thankfully. Magazine back issues are available through Lekiosk too.

But what’s the point of Lekiosk on an iPad, when you can just buy any of these mags through the Newsstand app?

The Plan
Lekiosk’s real appeal for us isn’t the slick 3D visuals or the easy aggregation of lots of big name mags, but a special £10 deal that’s been made with its magazine partners. You can buy magazines individually for around the standard £3-4, or pay £10 a month and you can download 10 magazines. Not every single magazine is part of the deal, but most are – and some seem to be left out because they’re lower-cost £1.49 jobbies like MicroMart. But still, even if we’re just saving 50p rather than £3, we’d rather have the option. 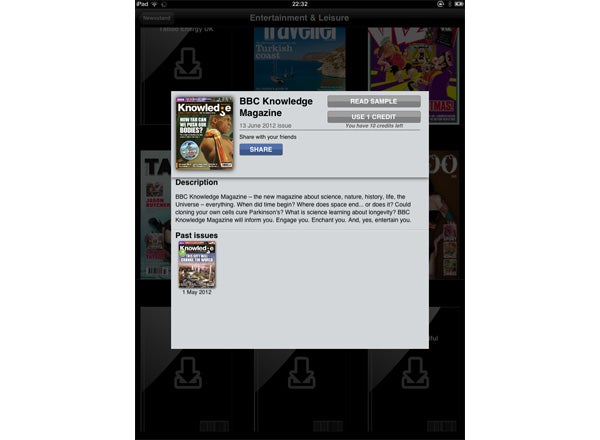 For the single user, the £9.99 plan may be overkill. The 10 tokens you get run out after the month and can’t be carried over. If you’re a light magazine reader, there’s arguably not a great deal of point in investigating Lekiosk. But if you have a family iPad or just love the magazine format, it’s a bit of a bargain. £1 a magazine? Can’t say fairer than that.

There’s no commitment to stay on for more than a month at a time, and any magazines you buy don’t simply disappear after you stop subscribing (although have to be read within the Lekiosk app). If you’re really canny and don’t mind reading slightly out-of-date articles, you could even sign up for the £10 deal every now and then, and just gorge on back issues.

Playing the system? Perhaps, but it’s what helps to make Lekiosk a pretty attractive underdog alternative to the official Apple mag store. 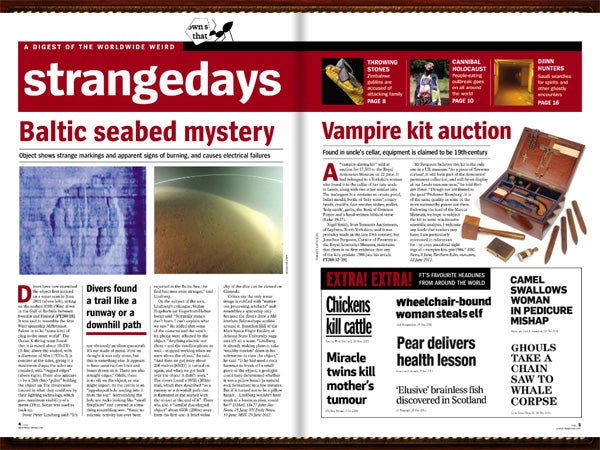 But about the reading experience? Lekiosk’s publications rely very much on magazines that produce basic PDF-like renditions of their paper originals. There’s no snazzy next-gen nonsense going on here. However, there is a nav bar that lets you flick quickly to particular articles within issues, you can share issue links over email, Facebook and Twitter, and you can zoom in and out a little. In order to keep the images looking sharp, you can’t zoom in dramatically, which is a pity, but as long as you have decent eyesight it shouldn’t prove a problem.

Although we’re not all that convinced by everything about Lekiosk, its 10-mag plan alone makes it worthwhile. The 3D’s a bit of a gimmick, the execution of the digi mags is very traditional and we did notice a few categorisation issues. But we can overlook these issues for the price.