There’s no point denying it: Lego Worlds is effectively Lego Minecraft. While far from a direct clone, it’s certainly a take on Mojang’s classic, with those chunky blocks and pixelated textures replaced by shiny plastic Lego bricks. Yet while it’s a sandbox game of resource-gathering, construction, exploration and adventure, Lego Worlds also tries to bring something different to the experience.

Like Dragon Quest: Builders, it mixes up the Minecraft gameplay with a storyline and quests, and there’s even a hint of No Man’s Sky in its procedurally generated scenery and basic structure. A game that started out in early access as a very basic, very freeform Minecraft-style game has evolved into something quite different.

You begin the game as an astronaut, your little spaceship crash-landing on a tiny tropical planet full of Lego pirates. Some of these pirates have tasks for you to do – build a pirate throne, construct a clock-tower. Complete these and you’re rewarded with gold bricks which can be used to repair and refuel your spaceship and get you as far as the next world. 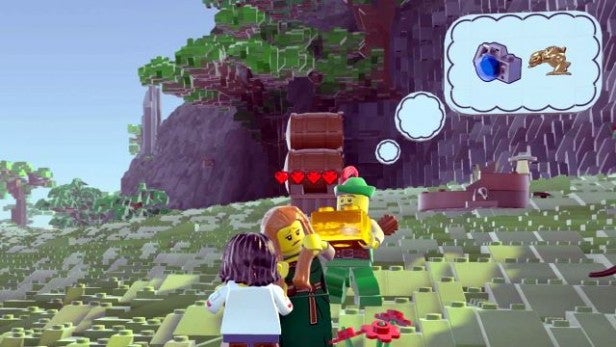 Reach that, a volcanic realm of grumpy cavemen, and you’ll find more jobs to do, helping cavewomen down from the edge of the volcano or building a bridge across the burning lava streams. Complete these and you’ll have more gold bricks in the bag, and you’ll be set to launch towards your next exciting destination.

Amass 10 gold bricks and more planets open up – fantasy worlds with tunnels, trolls and archers, a junkyard world with towers of broken cars where zombie teens attack snack-obsessed construction workers. Reach 25 and even larger worlds unlock, complete with multiple environments so that an arctic zone blends into rocky crags or savannah and jungle zones surround a bustling Lego town. Keep on going through 50 to 100 and you’ll eventually be able to create your own worlds, then populate them with your own people, animals and buildings.

How? Well Lego Worlds spends its early stages feeding in a selection of cool Lego tools. First of all comes the Discovery tool; point it at an object, animal or character and pull the trigger and you’ll store the model and be able to reproduce it at will. Next comes the scenery tool, which can be used to raise or lower the terrain or add and remove hefty chunks of the environment – very useful when you need to bring someone down to earth or get rid of an obstructive rock formation. 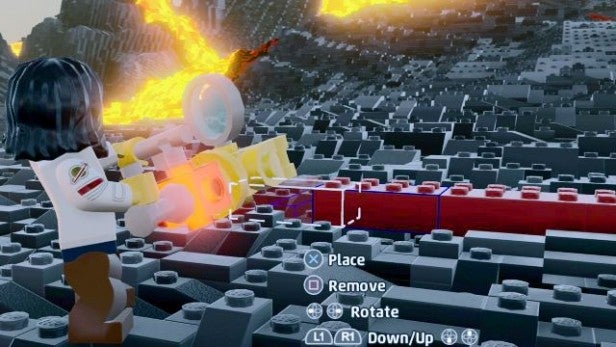 Soon enough you’ll get your hands on the Copy and Paint tools (self-explanatory) and the Build tool, the latter enabling you to build whatever you want, block by block, from your ever-growing library of bricks. And if you’d rather do things the easy way, you can discover instruction kits that will create specific items or buildings for you in one shot.

For a good few hours this makes for a charming, easy-going adventure where there’s always something fun to do around the corner. It’s perfect for kids, who’ll enjoy completing all those silly quests, finding and collecting a range of cute animals, discovering characters then customising their hero with the new heads and body parts available.

The visuals do a fantastic job or recreating the look and feel of Lego, only it’s all lit naturally through a full, high-speed day/night cycle. And while the big-name licensed Lego ranges were clearly off-limits, Lego Worlds still pulls in a great set of characters from its old Lego City, Lego Pirates, Lego Dino, Lego Pharoah’s Quest, Lego Power Miners and Lego Space themes, amongst others. 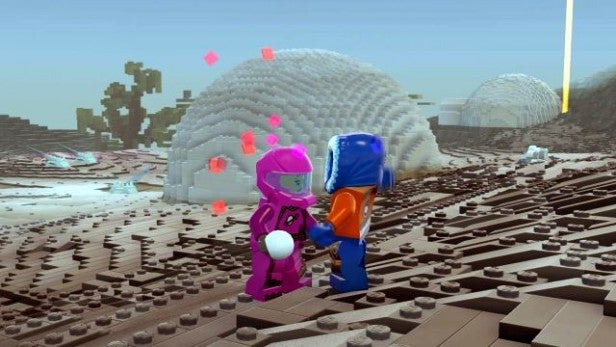 Each new world beckons with the promise of a new adventure, new people to meet, new things to find, new objects and bricks to add to the building repertoire. New tools like a lantern, grappling gun or acamera open up your options, allowing you to roam for longer underground, soar and swing through the sky or open up a whole class of photography side-quests to polish off. You’ll also get new vehicles to race around in and animals to ride, and who wouldn’t love a game where you can speed about on a snappy velociraptor or a stomping elephant.

After a while, though, even kids will notice that it’s all a little lightweight and repetitive. Because the worlds are procedurally generated – though a lot of the content has clearly been designed in advance – you can find that one junkyard world sits right next to another one, with the same population and gold brick tasks on both. Even as the worlds go larger and the environments get bigger and more interesting, and the game throws in tasks that mean finding something on one planet to take to another, you’ll still find that your quests become variations on a handful of themes.

It turns out that finding a doughnut to give to a construction worker or the components for a freezing gun for a scientist isn’t that different from finding a bow to give to an archer or a T-bone steak to give to a lion. Rounding up 15 animals to lead to a lonesome guy isn’t really more engaging than rounding up 10 to lead towards a lonesome maiden. While you’re almost willing the good times to continue, you can’t ignore the possibility that Lego Worlds is actually, maybe, just a teensy-weensy little bit boring. 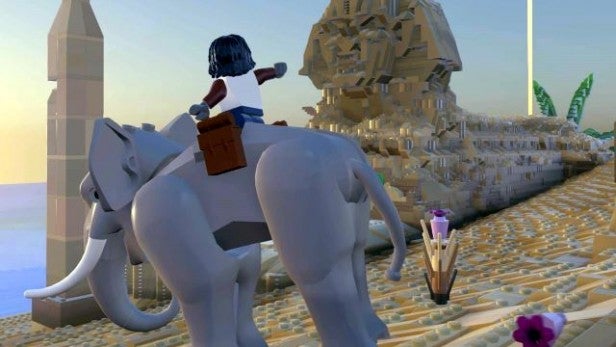 It’s saving grace should be the construction, particularly once the worlds open out and you’re given space to add, say, your own home to a bustling neighbourhood. Sadly, while there’s some fun to be had in building your own mansion and filling it with all the weird décor, gadgets and gizmos you’ve discovered, Lego Worlds never quite gets the whole thing right.

On the one hand, just replicating your discoveries, copying buildings and using the kits is a bit too simple to be fun. On the other, sculpting the landscapes and – particularly – using the Build tool can be a chore. Working in 3D with a slightly over-eager camera doesn’t make it easy, it’s often hard to see exactly where your next brick is going and switching between brick types is a pain.

When you think of building in real Lego, it’s a fantastically flexible and intuitive thing to do. With Lego Worlds’ virtual bricks, it’s anything but.

The game also has some annoying flaws, at least on PS4. These start with inconsistent frame rates, poor draw distances and missing blocks and extend to schoolboy errors, like the fact that you don’t seem to be able to activate your spaceship when you have two players active in the game. This means you need to have one player dropping in and out of the otherwise enjoyable split-screen mode. You can play co-op online, but you’re limited to playing with existing PSN friends – quite understandable given the young audience for this game.

Put it all together and you have a game that’s good enough to keep kids busy on a rainy Sunday afternoon, but nowhere near as absorbing or addictive as Minecraft (which some parents may think is a good thing).

There are some great ideas in here, some funny characters and plenty of scope for Lego lunacy and mayhem, but the quest stuff doesn’t drive you forwards as it does in Dragon Quest: Builders, while the real, in-depth construction is hard going.

Even for a family that can’t get enough of other Lego games, Lego worlds could be a slight disappointment.