Available on Xbox 360, PS3, Xbox One, PS4 (reviewed), Wii U, PC
So many games based on so many familiar characters and movies, and still the TT Games Lego series has yet to jump the shark. True, you’ll find some miserable souls complaining that the games are formulaic and repetitive – that they’re really all the same once you look beneath the movie skin – but they’re the ones missing out.

Each Lego game might not differ much from the last one, or even the one before that, but there’s always some slant, some new innovation or twist, that lends the game a different feel. Just as last year’s Lego Marvel Super Heroes built on and reworked 2012’s Lego Batman 2: DC Super Heroes, so Lego: The Hobbit finds fresh ideas with which to add to the same year’s Lego: Lord of the Rings.

Given the success of Lego: LOTR and the first two parts of Peter Jackson’s three movie adaptation, this is hardly an unexpected game. The only real surprise is that we get it now, with the last film still to come (we can expect ‘There and Back Again’ to be covered by a DLC pack when the movie is released). Nor does the content exactly defy expectations.

Middle Earth – or at least those parts of it dealt with during The Hobbit – becomes an open-world map, linking together a series of chapters that take you through the events of An Unexpected Journey and The Desolation of Smaug.

The gameplay covers all the usual stuff: smashing up the scenery to collect Lego studs, reassembling chunks of smashed scenery into new shapes, unlocking different characters, and using their varying abilities to get past every obstacle in your path. If you’ve played any Lego game since Lego Star Wars, then you’ll have a pretty good idea of how the basics work. 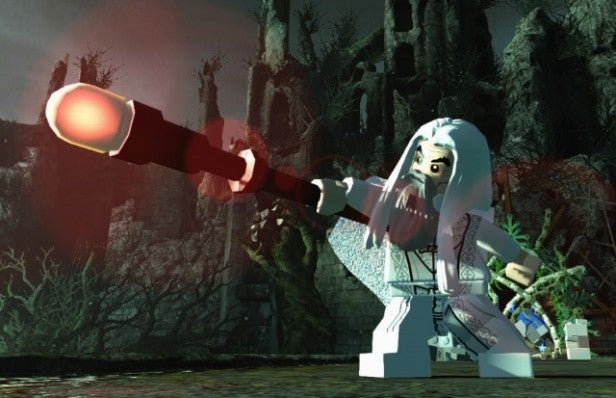 Yet Lego: The Hobbit isn’t content to retread the same old ground. With thirteen dwarves, Bilbo, Gandalf and a range of other heroes flitting in and out of the game, there’s been a real effort made to give each character some distinctive capability, whether it’s a sling or a bow and arrow to fire at target switches, a grapple to swing across chasms or drag down the scenery, or – in chubby Bombur’s case – a unique approach to makeshift trampolines.

There’s also more emphasis on characters working together. Three of the dwarves hold pole arms that double as a makeshift ladder, and the game allows you to stack all three up to reach higher ground. Dwarves also have a new double-up ability in combat, which becomes essential when taking on the game’s bigger foes, and can even swing in tandem if need be. 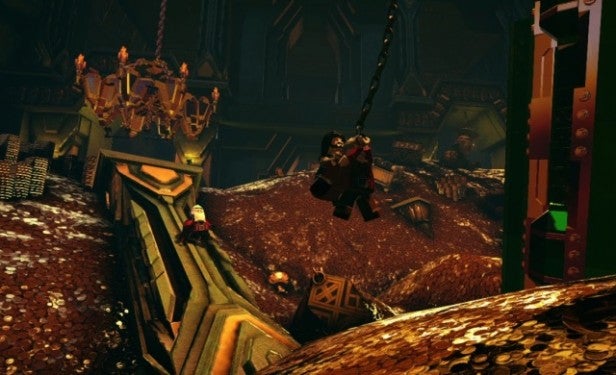 Perhaps most importantly, Lego: The Hobbit throws in a new crafting feature, which combines the blueprints of Lego: LOTR, the brick collecting of Lego City: Undercover and the spot-the-piece subgame of The Lego Movie game. Here, smashed scenery releases not just normal Lego studs but various materials, which certain dwarves can also mine from specific areas of rock. The gathered materials can then be deposited at a nearby crafting station, where they’re transformed into useful objects or complex Lego sets.

In the latter case you go into a mini-game, where the set is part-built, but building pauses every so often while you choose the next part. Choose quickly and you earn bonus gold. Choose slowly or incorrectly and that bonus disappears. It’s hardly Mensa-candidate stuff but it’s a perfect fit for Lego, working in well with the whole construction theme. When you finish the set, there’s a pay-off in using it or watching it in action. 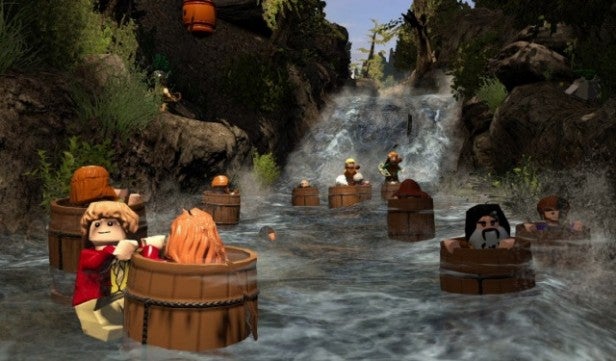 All this gathering and crafting also ties in with a feature of the open world setting: optional side-quests. These mostly have you finding or crafting items for the characters hanging around Hobbiton, Rivendell, Laketown etc. You’ll need to find the required stuff and bring it back to the characters concerned, though in some cases you can cut down on your journey by trading materials with the traders you’ll find dotted around.

It all helps to boost the longevity of the game, as will the usual Lego obsessions with collecting every special kit and every character and getting a 100% rate on every level. To do so you’ll not only have to scour the map and complete all those side-quests, but go back and reconquer levels in freeplay mode, using characters you couldn’t access first time around. This has always been the source of the Lego game’s staying power, particularly if you play it with the family in the brilliant split-screen co-op mode. On this count, Lego: The Hobbit, won’t disappoint.

You don’t actually need to love every minute of the films to find it funny and endearing. In fact, you could argue that the game does a better job than the films in distinguishing between the thirteen dwarves – the exaggerated characterisations actually help – and many of the sequences that felt over-extended in cinematic form work surprisingly well in game form. Even the first film’s notorious dinner party/washing-up sequence is transformed into a bizarre rhythm action set-piece. How can you not like that?

There are some valid complaints. Often the game makes it so blindingly obvious what you have to do next that any sense that you’re solving puzzles disappears. It might seem necessary for a game aimed at a family audience, but Lego: The Hobbit sometimes goes overboard and spoils the fun.

While this can be a very pretty game on PS4, with some fabulous dynamic lighting, it hardly puts the console’s power to devastating use. Just as the early Xbox 360/PS3 Lego titles merely added gloss to the PS2 and Xbox versions, so it looks like we’ll have to wait before we get a truly next-gen Lego title. 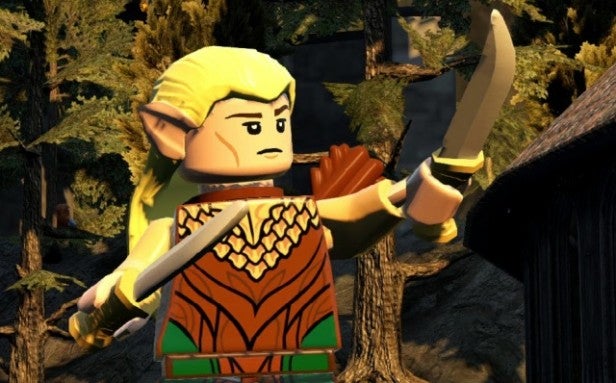 But then the Lego games have never been about the visuals or the technical accomplishments – though bugs and bad camera angles seem to be becoming less and less of an issue. They’ve always been about charm, wit, great, family-friendly co-op gameplay and paying an affectionate but cheeky tribute to your favourite blockbuster films.

Verdict
It’s not the most revolutionary game in Lego history, but Lego: The Hobbit delivers everything fans expect from a Lego game, with the usual grace, great humour and engaging, puzzle-packed gameplay. It makes the best of its unwieldy source movies, and it has enough new ideas to feel like more than a reskin of Lego: Lord of the Rings. It’s also still a great game to play with the kids.