As both a completely new take on the iconic mascot and a real-world homage to Nintendo's long-running series, LEGO Super Mario is a triumph. The vibrant aesthetic of the Mushroom Kingdom is recaptured here, but it's the electronic side to LEGO Super Mario that allows it to stand out as one of the most inventive LEGO sets to date.

For a long time now, LEGO has engulfed the majority of the zeitgeist through countless branded sets, video games and films. In 2020, playing with LEGO is less about building your own contraptions from scratch and more about living out your fantasies from iconic franchises such as Star Wars, Harry Potter and even The Simpsons. It seems almost inevitable then that the Danish toy company would eventually set its sights on gaming’s most prolific mascot: Mario.

Well, that concept is now a reality as Nintendo’s pesky plumber has been recreated in LEGO form, alongside the very landscape of the Mushroom Kingdom and its various inhabitants (good and bad). It’s a LEGO experience unlike any other – and, arguably, one of the best toy sets you can buy right now.

Mario’s foray into the world of LEGO comprises many different parts, but it all begins with the ever-so important Starter Course. Within this pack you’ll find the leading man himself, Mario, but this time with a blockier aesthetic to adapt to the LEGO world in which he now finds himself.

Aside from Mario, there are only two other characters included in the box: Bowser Jr and a run-of-the-mill Goomba. There’s no denying that the LEGO versions of all these characters are quite funny to look at, but they have retained much of the colourful charm that has made the Super Mario series so iconic in the first place. 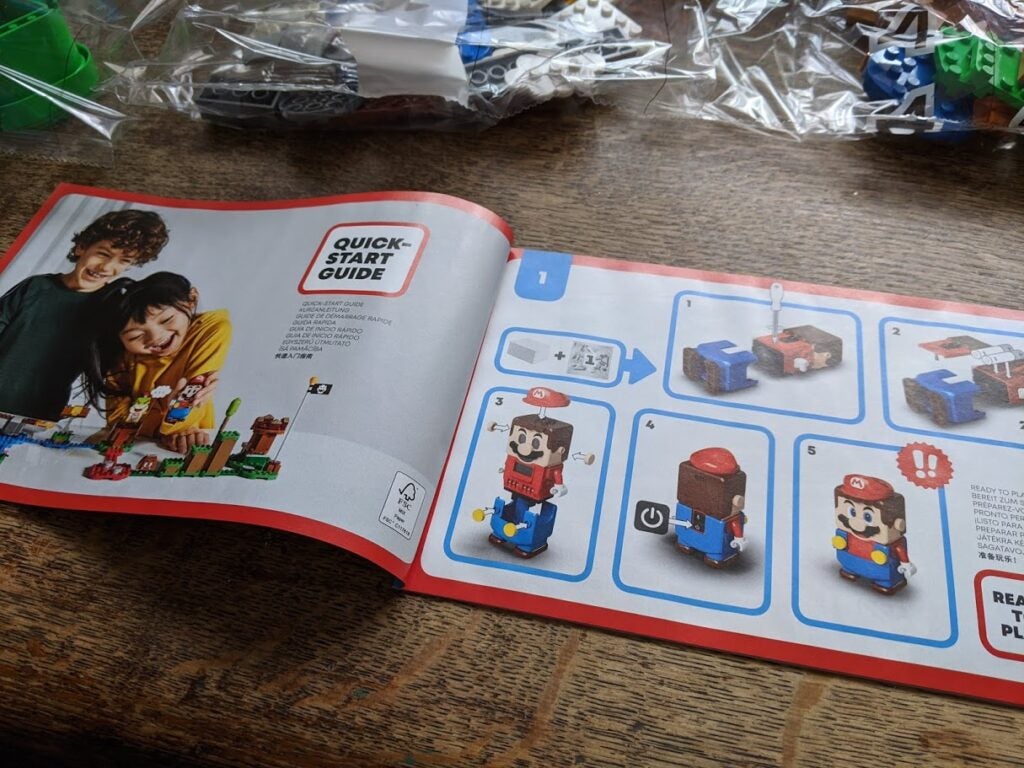 The rest of the Starter Course is made up entirely of the landscape you’re expected to traverse, with a warp pipe, grass, lava and water sections, a pole for the finish line and even a question mark block. While the final product isn’t quite as substantial as other sets around the same price point, the physical construction is only one half of what’s available here.

Given Mario’s roots as a video game hero, it would be remiss if LEGO hadn’t tried to recreate the feeling of his adventures; but that’s not the case at all. In fact, once you pop two AAA batteries into Mario’s dungarees and his eyes come to life, the game’s electronic side reveals itself.

See, the Starter Course (and the rest of the Super Mario range) utilises NFC technology to gamify the whole experience. Simply put Mario down into a warp pipe and the stage will begin. By bonking enemies on the head and hitting a question mark block, Mario can snag coins and items respectively, but the character will also react to the environment he’s in.

For example, hanging out on the green grass isn’t an issue, but spending too long on the red lava LEGO blocks will cause Mario to lose health, so you have to be particularly careful during the segments that require some careful balancing acts to complete. The added challenge makes the LEGO Super Mario set truly unique, but the experience opens up even more with the accompanying app. 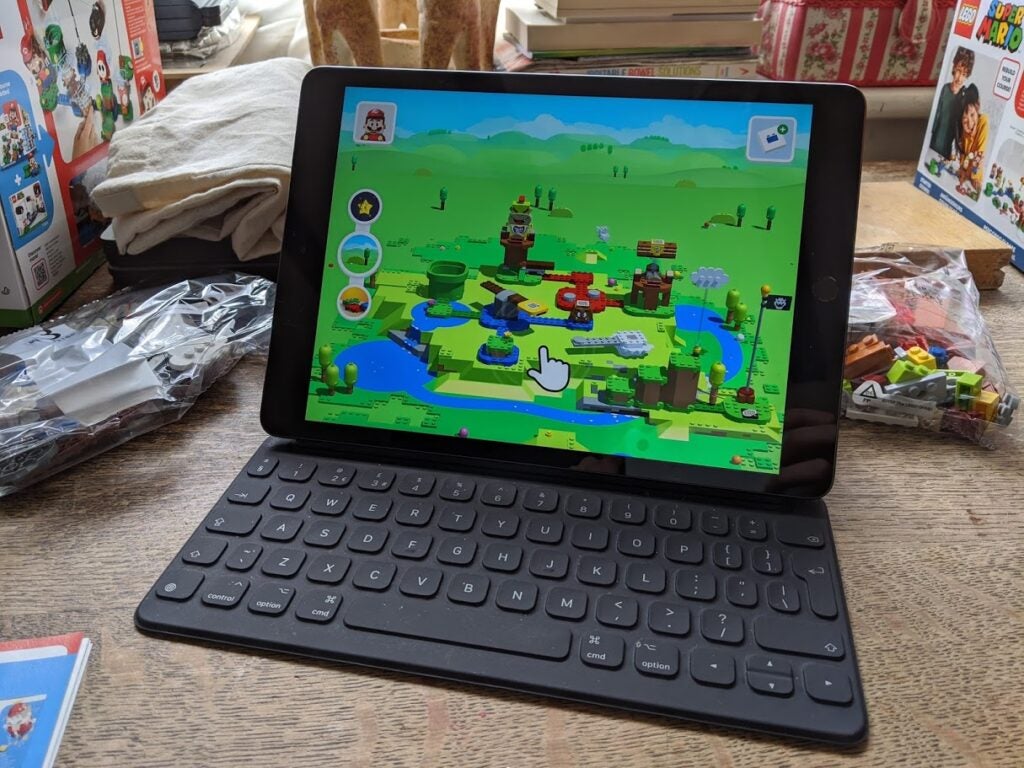 Available on both the Google Play Store and the App Store, the LEGO Super Mario app is two-fold. It works as both a digital manual for the building process, and as a social platform that lets you see how your level attempts compare against other players worldwide.

You can even share you own adapted LEGO Mario stages to inspire others, and see their creations in return. It’s a great little feature that goes a long way to adding some longevity once you’re done with the initial manual.

Add-ons and accessories – Plenty of extra sets available, at a cost

Once you’ve learned the ropes with the aforementioned Starter Course, there is no shortage of extra sets available to expand your LEGO Mushroom Kingdom into a sprawling world map. There’s plenty of variety here, with a Piranha Plant Slide and even a collection of Toad Houses. However, the biggest and most enviable of the bunch is Bowser’s Castle, which serves as the pièce de résistance to cap it all off.

The problem is that if you plan on buying all the available sets, you’ll incur a cost around the £250 mark, at which point you could buy a Nintendo Switch Lite with Super Mario Odyssey for the same price. 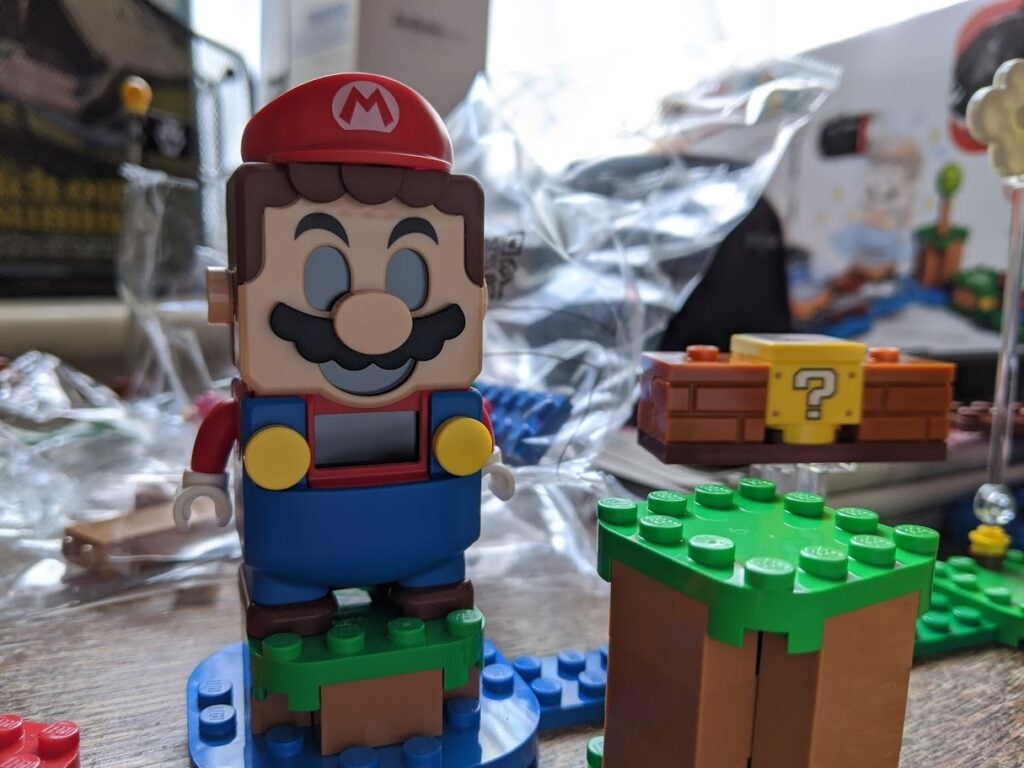 Mario can be a bit terrifying when he’s switched off.

Luckily, there are a few low-cost options in the form of additional costumes for Mario to wear. Included in the current range are the Fire Power-Up Suit, Cat Mario and more, with extra costumes on the way.

For the sheer enjoyment of getting to see Mario reconstructed as a LEGO figure, Super Mario is a worthy recommendation, but it’s the extra features beyond the typical LEGO experience that will get you hooked.

Even for experienced gamers, there’s a still a genuine challenge to be had here, making it a great LEGO set for kids and adults to enjoy together.