Available on October 6 for PS4 (version tested), Xbox One, Nintendo Switch and PC

The formula first introduced with Lego Star Wars way back in 2005 has remarkably stood the test of time. It has constantly refined itself with new licences and innovations that keep it fresh, fun and perfectly in sync with its target audience. While it can grow repetitive, Traveller’s Tales always manage to craft a cohesive world that is both fun to explore and tear apart as little plastic toys capable of immense creativity. Lego Ninjago continues that trend, even if a few obvious cracks are beginning to show.

Based on the recent film of the same name, Lego Ninjago brilliantly captures the atmosphere and humour of its counterpart. It also follows the narrative of the film so closely it almost became a detriment to my enjoyment. The solo campaign is a disjointed re-telling of the tale told through clumsy cutscenes and excerpts from the film. Many of these are plagued with obnoxious audio and performance issues. The opening level even crashed on me, leading me to feel concerned about progressing at all.

Fortunately, these problems only surfaced during gameplay in the form of absurdly noticeable framerate drops. Emerging primarily in large city environments, it became difficult to adjust my character without performance dipping into single digits. It’s laughably distracting, especially when so many independent objects are flying across the screen at any given moment. After developing so many titles of this ilk, it feels like Traveller’s Tales should have nailed things in the performance department by now. 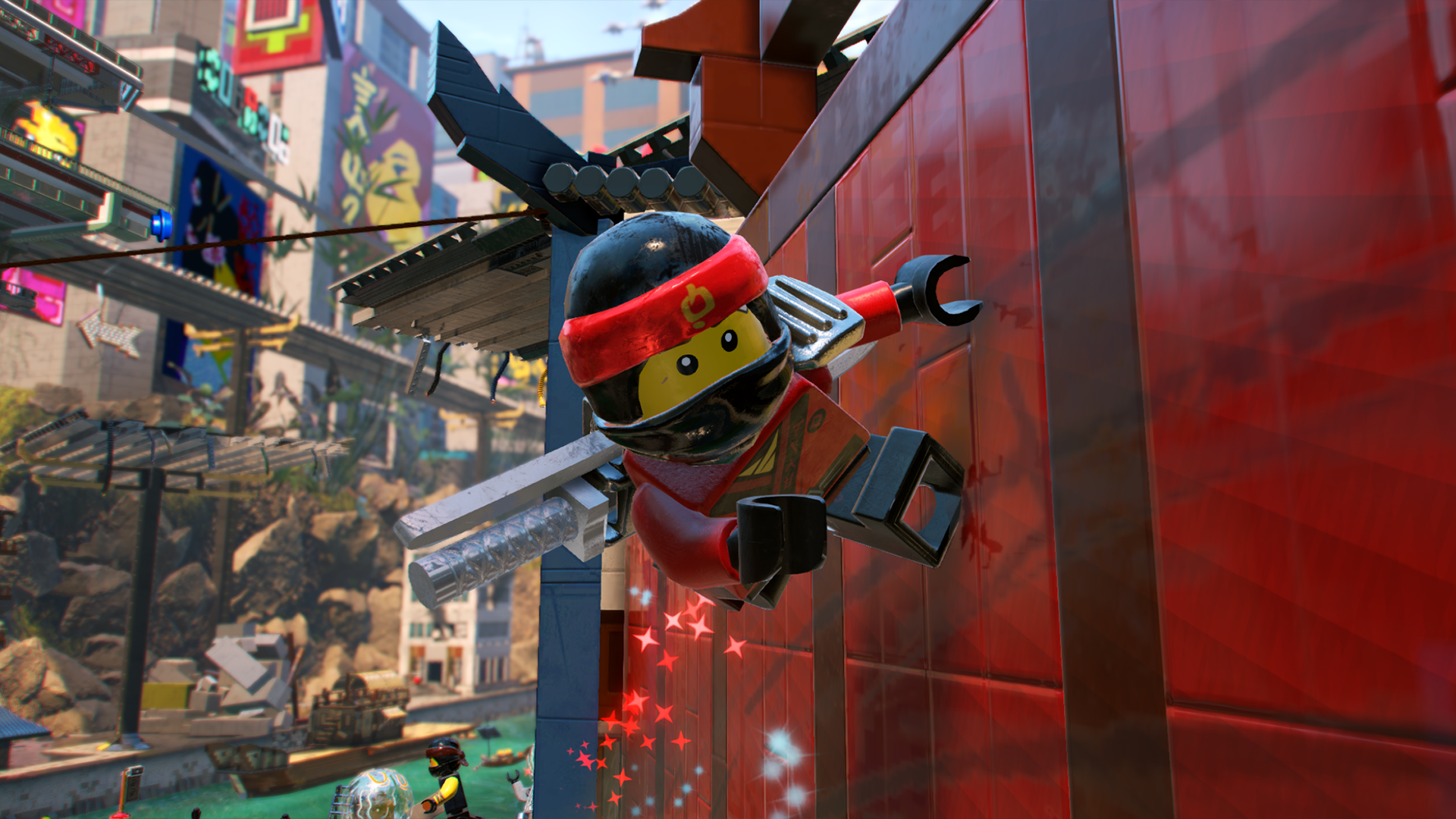 Performance problems aside, Lego Ninjago is a reasonably good time, making some clever innovations upon a formula we’ve grown so accustomed to. The usual mixture of stud collecting, combat and exploration remain untouched, although the former two elements have been expanded in some subtly excellent ways.

Combat in Lego Ninjago feels like a dumbed-down of Rocksteady’s Arkham titles, and this is no bad thing. With access to a few select combo variations, pulling off epic acrobatic maneuvers can be done with the touch of a few buttons, making me feel like an utter badass without trawling through daunting move lists.

While relatively shallow in terms of depth, your combat repertoire can be expanded by purchasing upgrades from a skill tree. Obtained by using ‘Ninjanuity Tokens’ these abilities are capable of plenty of cool things. Whether it’s increasing your overall damage or causing enemies to erupt in a fountain of studs upon death, each of them feels genuinely helpful when it comes to chasing the golden goal of 100% completion. Watching all of my weapons transform into golden objects of destruction was awesome, even if they were only used to slice up plastic toys.

Ninjago’s combat is given ample room to shine in a series of Dojos. These are wave-based combat arenas that have you facing off against a variety of different enemies. The objective here is to gain the highest possible score, whether through picking up studs or executing a perfect series of combos. These excursions are hugely entertaining, although I wish they appeared more frequently across the open world. 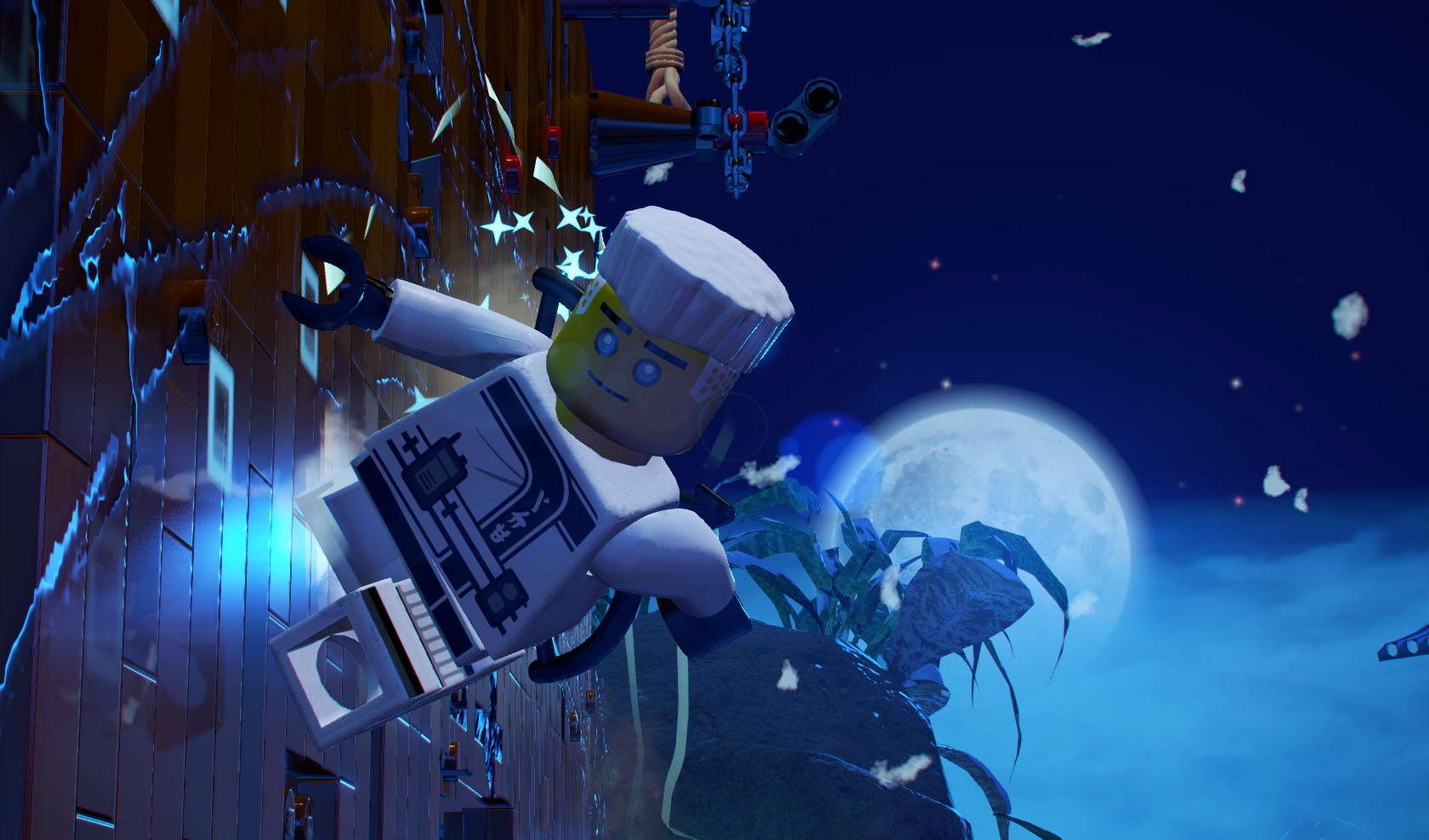 Ninjago’s open world is a strange one, segmented into several different areas that story missions also take place in. Upon leaving or entering a new location you’ll be met with an irritatingly long loading screen. Luckily, once loaded, the majority of areas are positively massive. I found it hard to ignore every little nook and cranny of each map, knowing they were absolutely stuffed with potential collectibles. It’s what the LEGO titles do best, drawing you into a legofied universe of beloved properties while simultaneously twisting them into fast-paced collectathons.

Most of my time in Ninjago was spent as charismatic ninjas as they made wonderfully terrible puns while pouncing across rooftops cutting up baddies. With several characters to switch to at any given time, I was always mixing and matching to capitalise on different weapon loadouts. While they all feel quite similar, watching bombastic animations play out is a joy, and will no doubt entrance younger audiences. With how entertaining this can be, it’s sad how rudimentary the puzzle design is throughout each level.

The majority of puzzles boil down to smashing nearby objects into pieces and subsequently using them to build others to reach new areas, scare away enemies or defeat a boss. Spinjitzu skills help rock the boat somewhat, lending each ninja an elemental power to be used in unique situations. Unfortunately, only on a few occasions did these abilities feel well and truly exciting to use. Ninjago’s meat is definitely in its combat and collectibles while the puzzle design sadly lags behind. 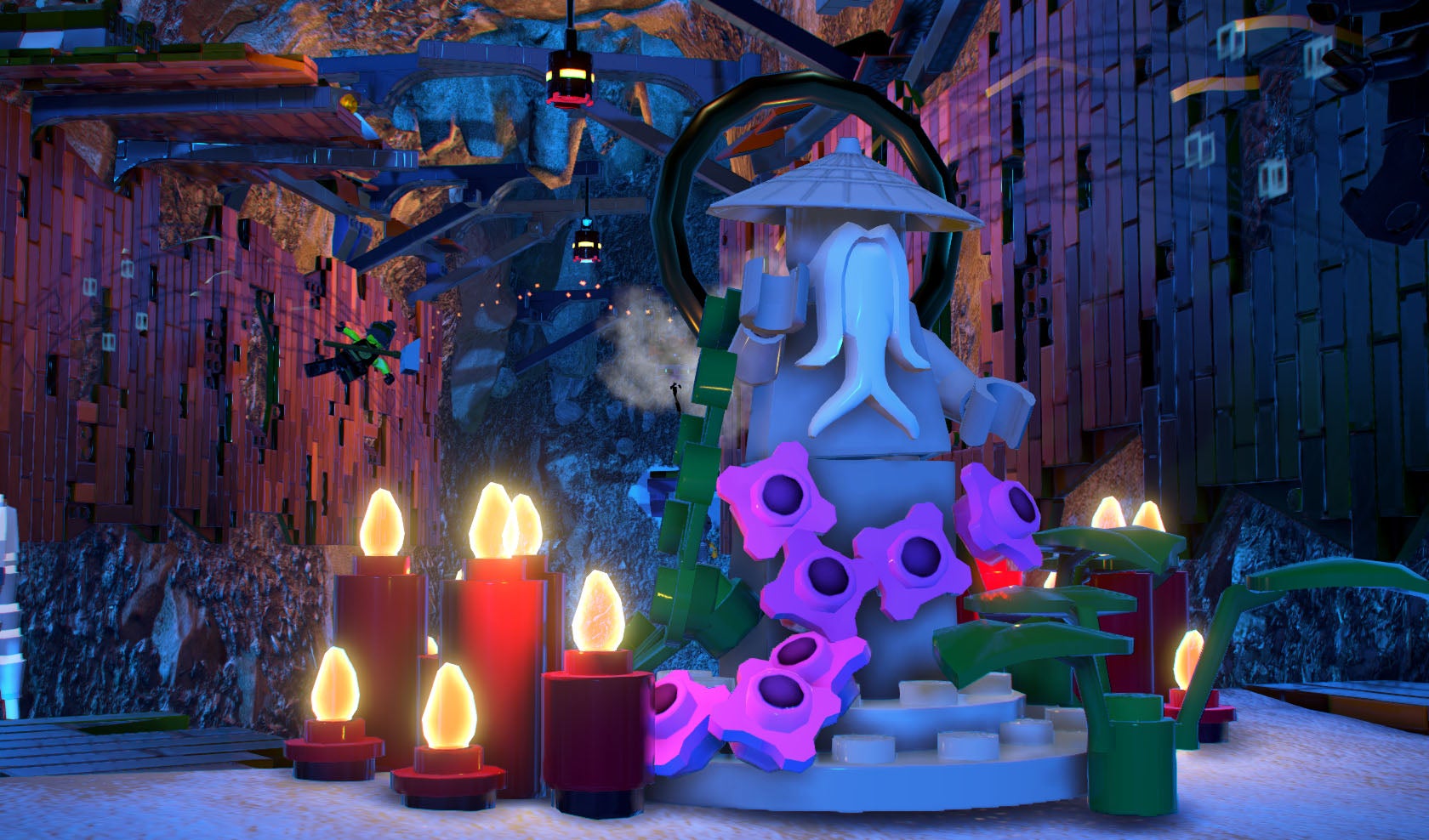 When you aren’t progressing through story missions and gobbling up secret collectibles you can also take optional side-quests from NPCs across the world. The majority of these involve fetching multiple objects or defeating enemies in exchange for a golden brick. These are then used to access special doors scattered across Ninjago, much like they were in previous Lego games.

Rewards from such ventures normally involve precious cheats or unlockable characters hinting at playsets not even mentioned during the film. Traveller’s Tales employing this amount of depth in its cast is really great to see, especially in a platformer so simplistic. Watching small figurines emerge from blind bags as you unlock them is irresistibly charming, proving to be a visual treat I came to anticipate.

The Lego Ninjago Movie Videogame is a fun platformer that expands on the established formula with an enjoyable combat system. Unfortunately, performance issues and lacklustre level design hold it back from greatness.