These top sets, vehicles and characters from the LEGO Movie 2 will get your creative juices flowing

What are the LEGO Movie 2 Sets?

The LEGO Movie 2 might have been great fun, but true entertainment is getting your hands on the characters, sets and vehicles to build various scenes for yourself. Fortunately, you can do just that with the LEGO Movie 2 Sets below.

Like the film, the sets are designed to appeal to a range of age groups. As such, there are simple sets for younger children, such as Emmet and Benny’s Build and Fix Workshop (4+); Emmet’s Dream House/Rescue Rocket (8+) for older kids; and then more challenging ones still, such as the Welcome to Apocalypseburg (16+), for teens and beyond.

More interestingly, what sets this particular range apart from previous entries is the ability to build many of the sets in different ways, or even being encouraged to free-form build.

Characters are spread throughout the sets, too, so you won’t have to buy everything to get yours hands on all of your favourites. 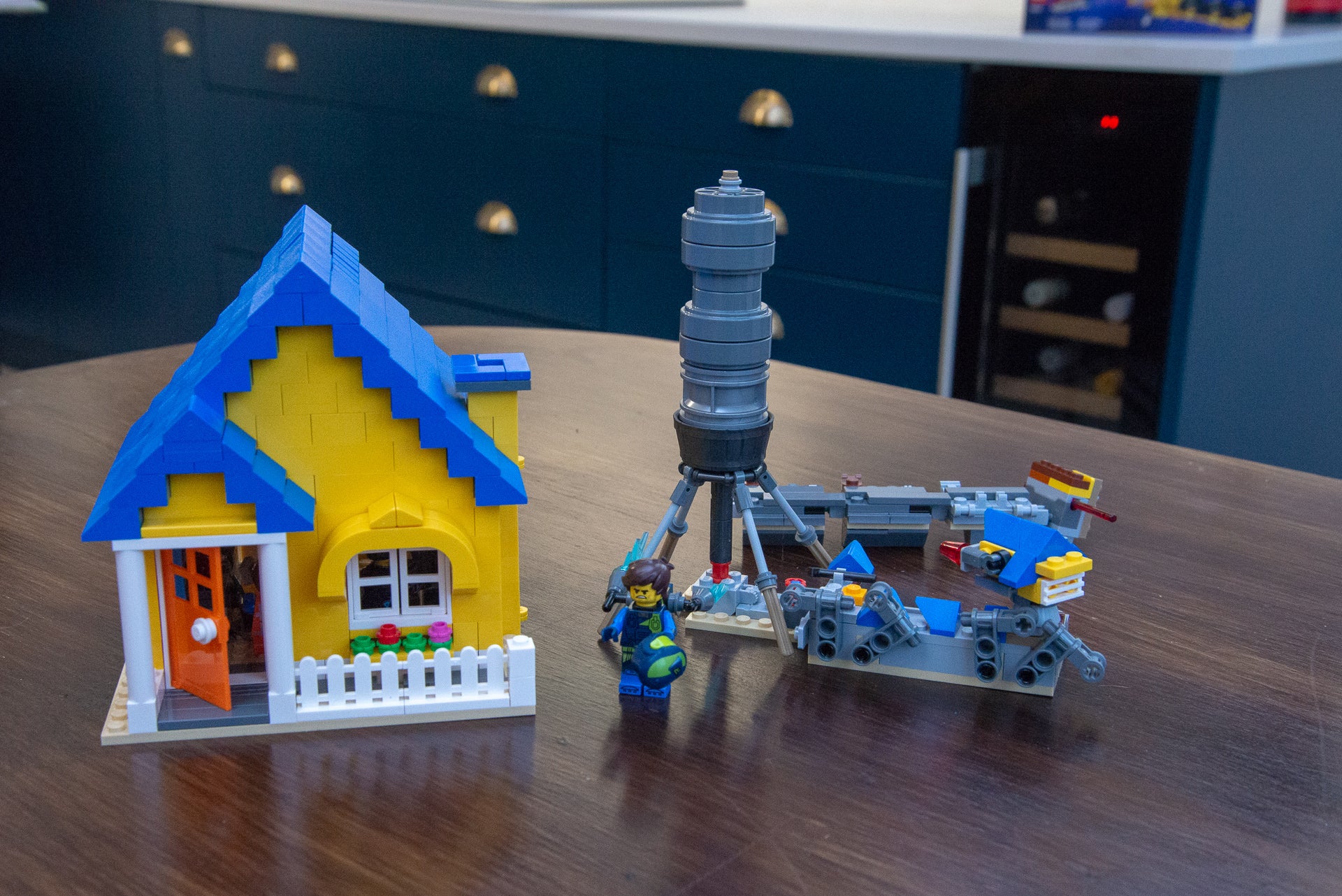 Emmet’s Dream House/Rescue Rocket! is a fun, involving set that can be built in two ways. As Emmet’s Dream House, you end up with a hinged house that opens to reveal a detailed interior, including living room, bedroom (complete with Unikitty), pictures and even cooking utensils. Outside, there’s a rocket and repair station. Once you’re done with the house, you can rebuild it into a Rescue Rocket. The house details are nicely preserved but the change gives kids something else to do and may spark their imagination for building other things.

As well as Emmet and Unikitty, you get Rex Dangervest, Lucy and Planty, too. There’s also a barrel with some frogs in it for some reason. With 706 pieces, it’s quite a detailed build and you’ll need a good afternoon with a child to complete it. 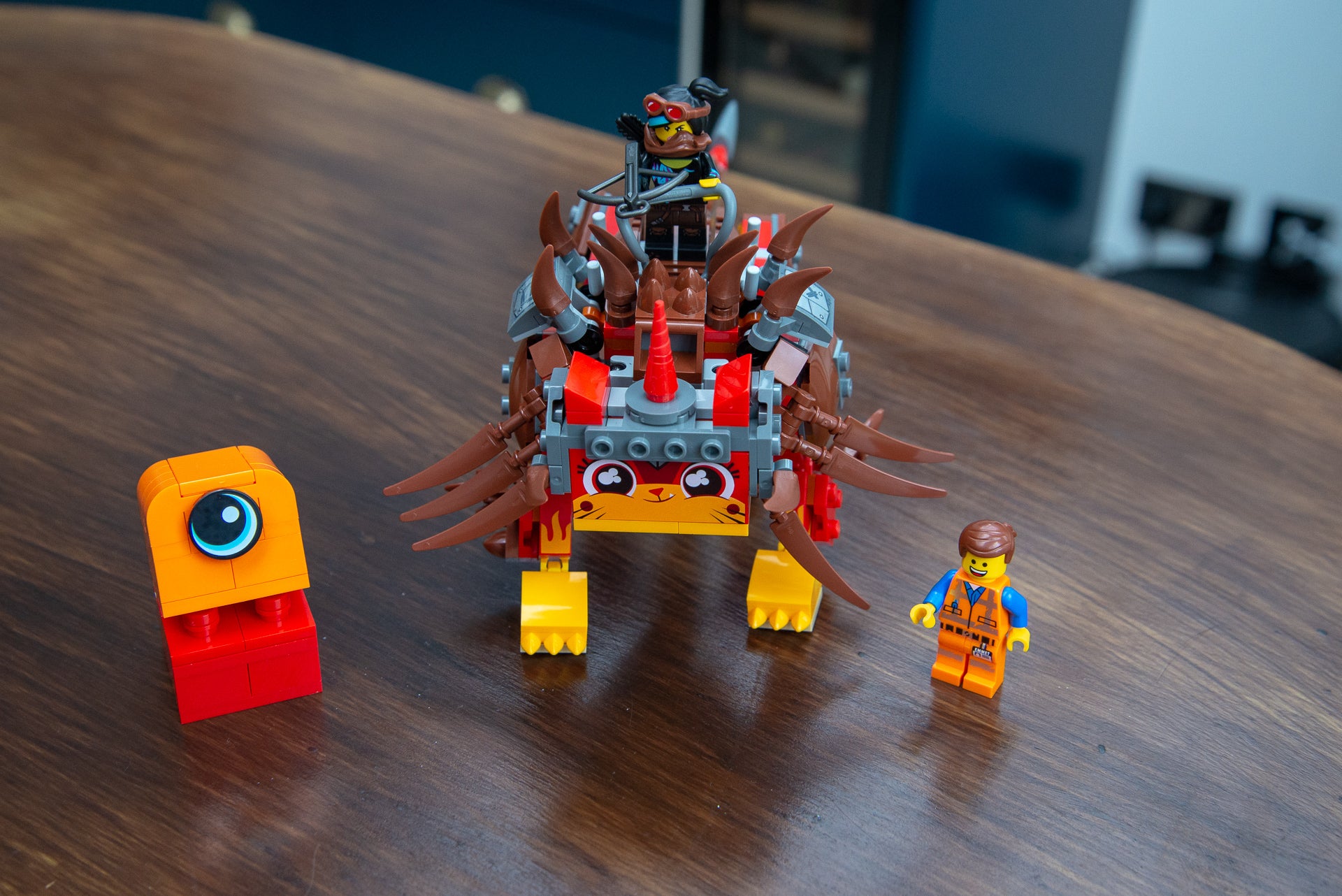 This is a great set, and you get to build Ultrakatty and Warrior Lucy, as they team up to save scared Emmet from the alien invader. The alien has a giant eye that spins around, while the hinged head lets you chomp away at Emmet.

It’s Ultrakatty that’s the real focus: a giant cat with articulated legs and huge spikes. There’s a choice of head, too, so you can make Ultrakatty look angry, fierce or happy. Warrior Lucy sits on top with her shield and crossbow.

With 348 pieces, you can expect this build to take an hour or so with a child. 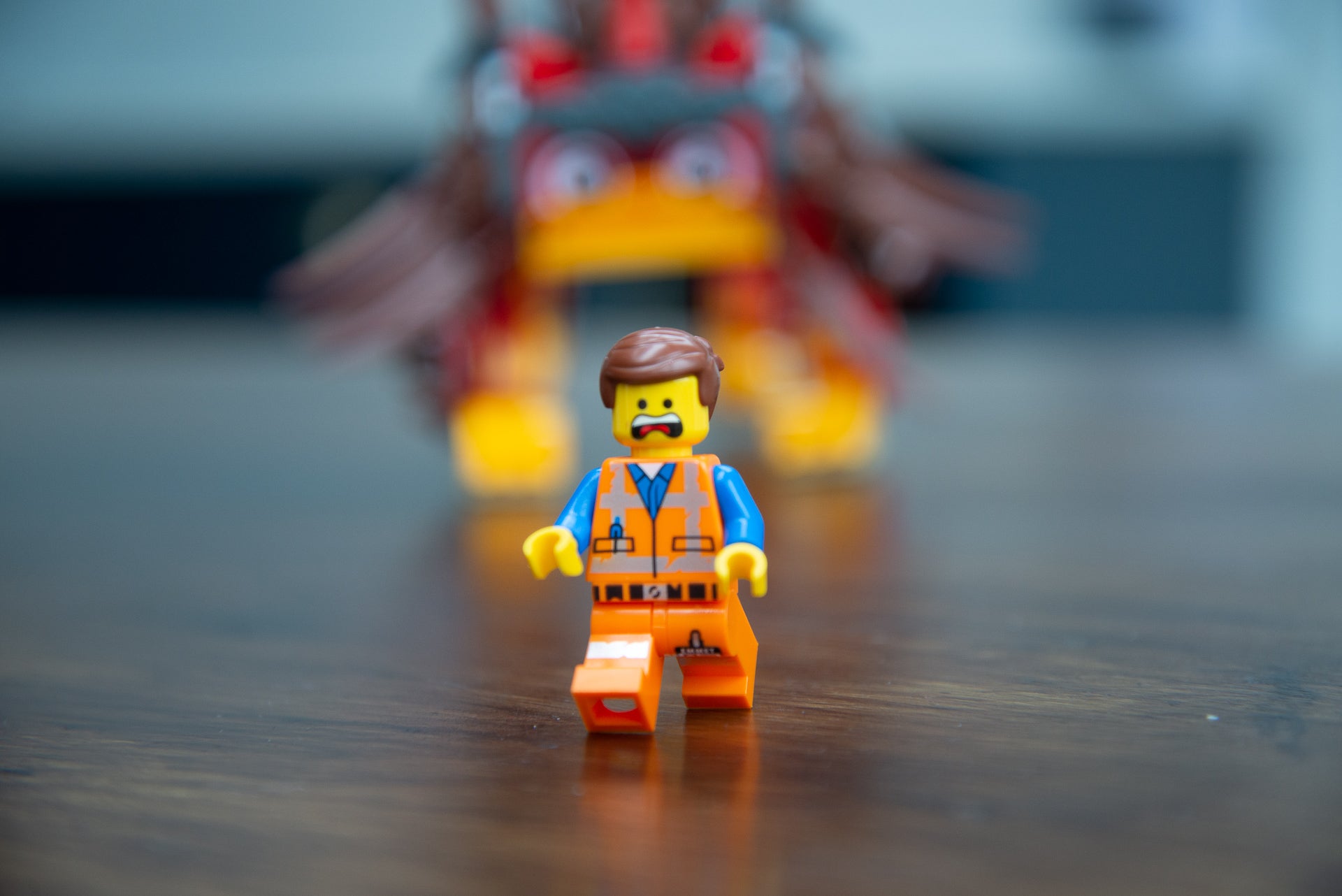 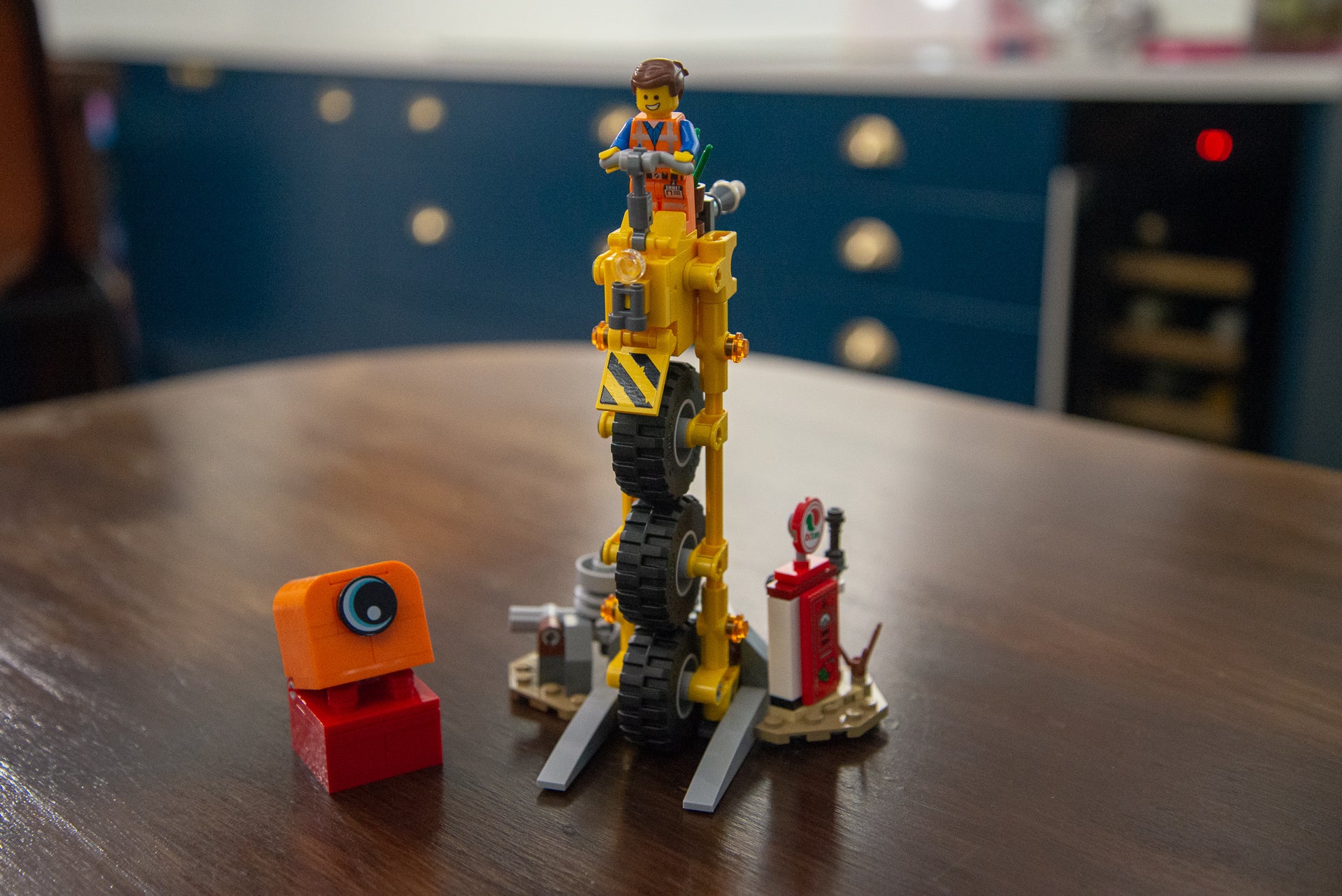 One of the smaller and easier-to-build sets, Emmet’s Thricycle is also one of the more memorable vehicles thanks to its three wheels stacked vertically.

Once built, the Thricycle will stand upright, and all three wheels move as you push the model forwards; for greater stability, you can dock the vehicle into the fuel station.

The fuel station also doubles as a line of defence against the alien invader (the same bobble-eyed character as in the Ultrakatty set, only a different colour). You can catapult a wheel hub at it.

With just 174 pieces, you should be able to get this one built within half-an-hour with a child. 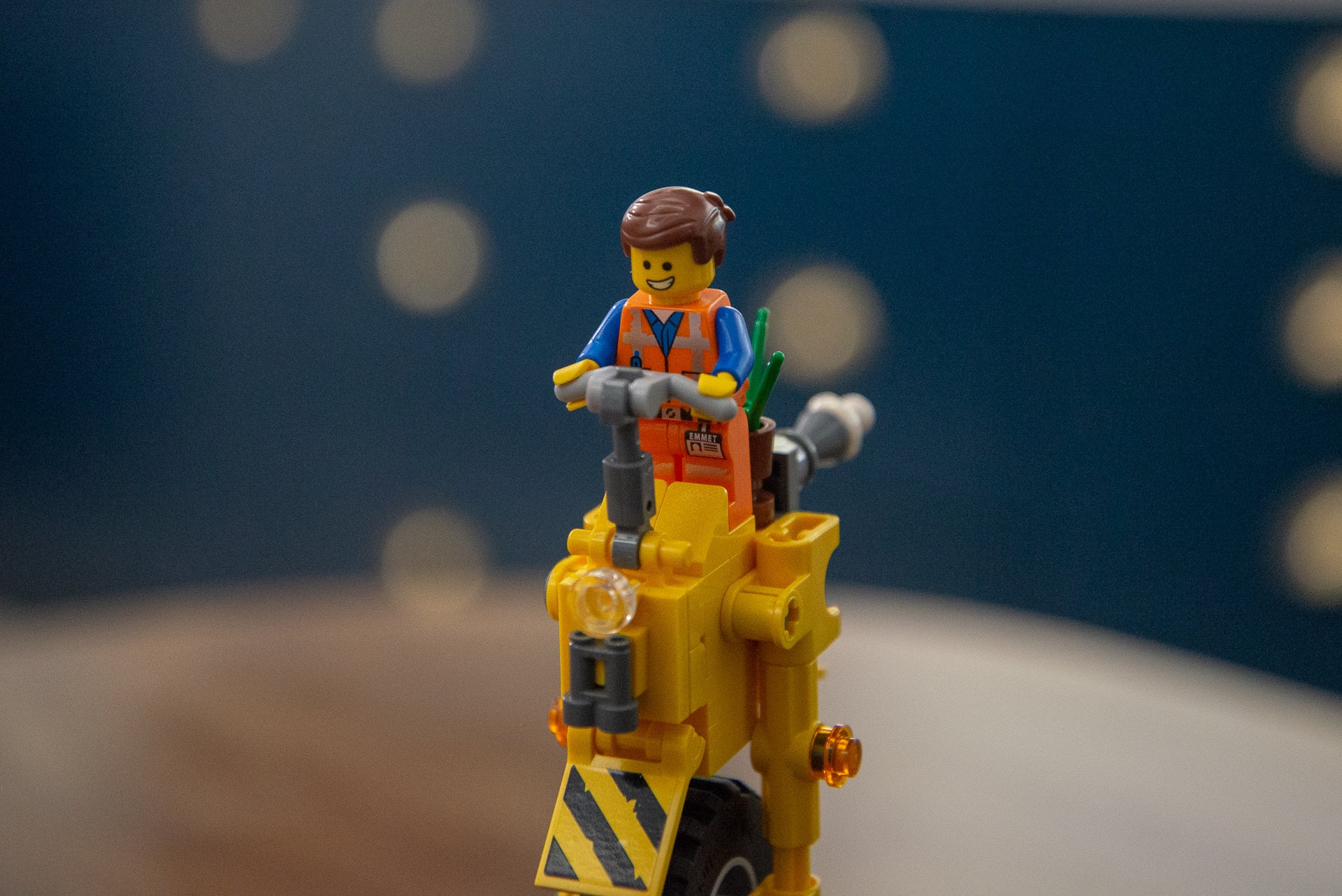 For kids who loved the LEGO Movie 2, there’s plenty on offer here. Nicely, you can get the main characters in multiple sets, which should keep all kids happy.

Some sets are a little more basic, but LEGO has encouraged changes and experimentation elsewhere, providing different ways of putting sets together. After all, isn’t that what LEGO is all about?