I own three Millennium Falcons. The first is made of 44 Lego bricks; it’s a little crude, but it fits in my shirt pocket. Another, at about 350 pieces, is the size of your average dinner plate.

I didn’t actually have to make space for one until late 2015, when a 1329-piece version was launched to coincide with the cinematic release of The Force Awakens. At 47cm long and 32cm wide, it occupies a great chunk of shelf space.

Nothing could have prepared me for the awesomeness – nay, the majesty – of Lego’s latest: the 75192 Ultimate Collector Series Millennium Falcon.

I was lucky enough to be present at its launch in the flagship Lego store in London’s Leicester Square. Here are my first impressions. 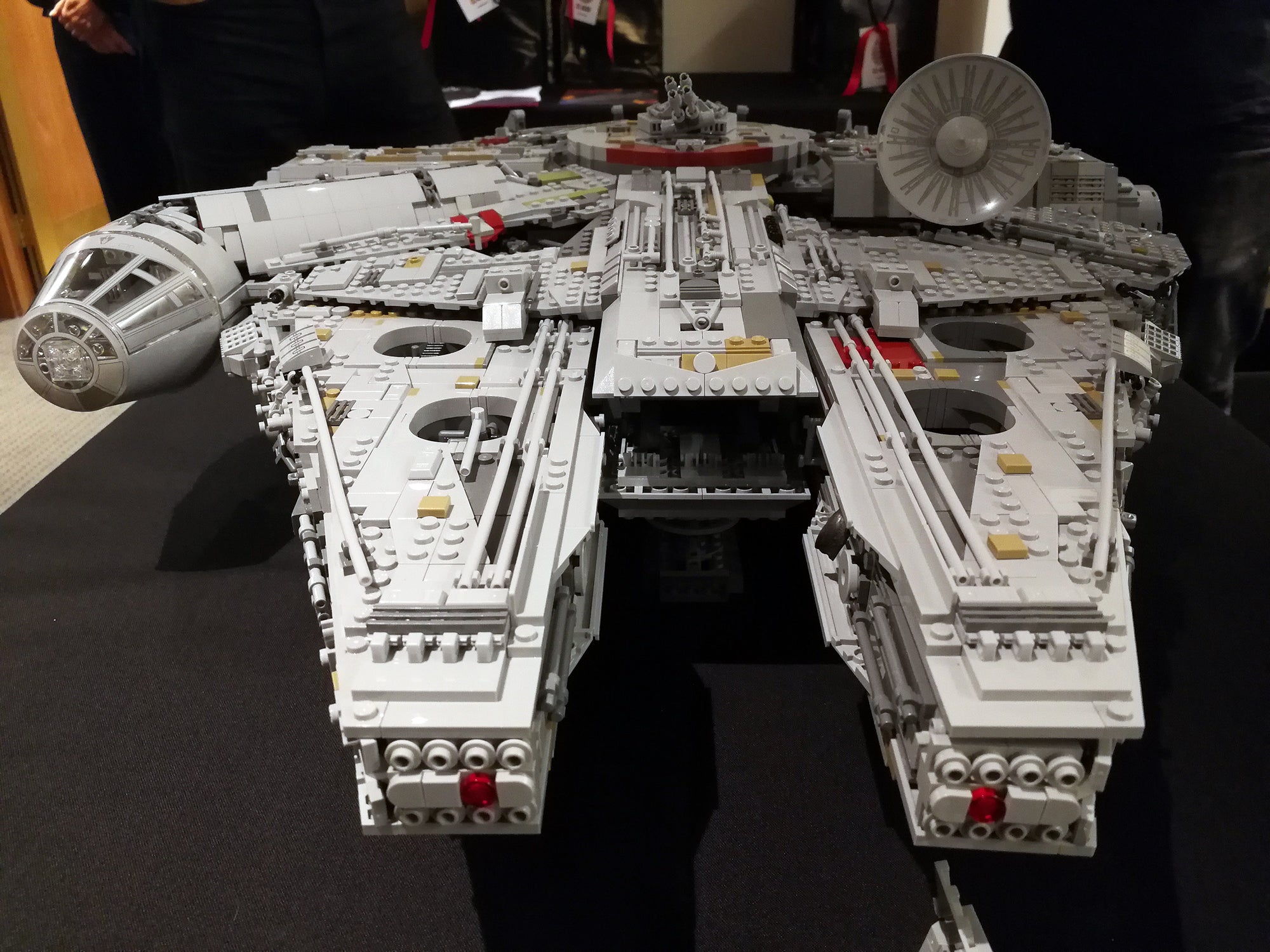 It’s big. Forget about shelf space, because no shelf is going to be big enough to be home to this model. It’s the biggest Lego set ever, comprising 7541 pieces. It stands at 21cm tall, 84cm long and 56cm wide.

That makes the 75192 Ultimate Collector Series Millennium Falcon bigger than my coffee table. It might just about fit on there, with a slight overhang, but then breakfast would have to be elsewhere.

I’d do that gladly. The 75192 UCS Millennium Falcon isn’t just a big ship, it’s a beautifully detailed one. The design is super-intricate. Take the hull alone: there’s so much texture, greebling, and sheer variety of parts that you could imagine that this thing is capable of take-off.

For those of us who know the ship inside-out, there are numerous neat touches. There’s a boarding ramp that lowers; a hidden blaster cannon; upper- and lower-quad laser cannon. There are even two flavours of sensor dish, to cater for different generations of Star Wars fans. The original round one seen in The Empire Strikes Back feels just right to me, but younger fans more familiar with The Force Awakens will appreciate the rectangular one.

Now for a bit of trivia that was revealed at the event. Jens Kronvold Frederiksen, director of Lego Star Wars design, was struggling to find the right piece to represent the centre of the round sensor dish. Michael Lee Stockwell, design manager for Lego Star Wars, proposed the hat piece worn by Master Wu of the Lego Ninjago series. The shape worked, but since the tie piece was brown to represent straw, it had to be remade in space grey.

The cockpit opens to fit four characters, which means the 75192 UCS Millennium Falcon is made in true mini-fig scale – more on those later. Individual panels on top of the ship can be lifted off to reveal detailed inner sections. There’s a Dejarik game table, a hidden floor compartment, escape pod hatches, an access ladder to the gunnery station, and an engineering station with a swivel chair.

I wasn’t able to open all these panels for a closer look, but I can confirm that there are some lovely passageway decorations, with stickers cleverly used to simulate depth. 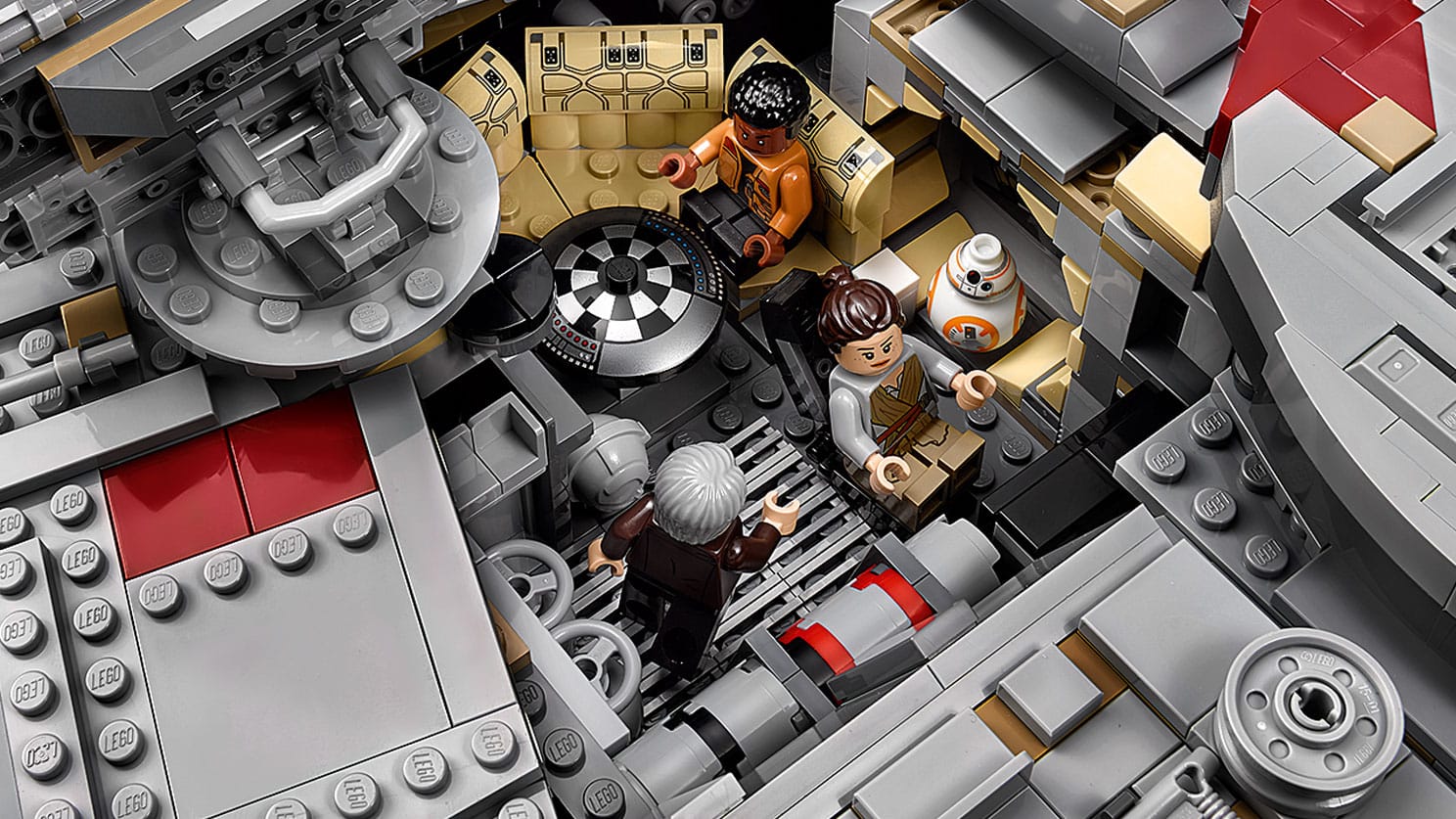 It’s a complex build, with Lego Technic parts used as the skeleton and regular Lego pieces layered on top for aesthetics. The designers said they had a tough time balancing structural integrity with detail, but they got there in the end.

I asked Jens if there was anything he couldn’t incorporate for structural reasons. He said no, but recommended against wall-mounting this Falcon to save space. Some of the panels fit as a result of gravity and friction alone, and would therefore fall off if the structure was mounted on a wall. He also pointed out it that it weighs 11-12kg, so while Lego is at heart a toy company, the 75192 UCS Millennium Falcon isn’t really something you’d want to ‘swish’ either.

Finally, the figures. The Falcon itself rightly steals the spotlight, but the figures are also excellent. I’ve mentioned that the sensor dishes are interchangeable to represent the Falcon in both original and sequel trilogies – this extends to the mini-figs too.

There’s Young Leia, Young Han, Chewbacca and C-3PO. Leia and Han have alternate faces with gas masks on them, and there’s also a Mynock figure – you can simulate the space slug belly scene from The Empire Strikes Back.

There’s also Rey, Finn and BB-8, as well as Old Han, so you can reenact events from The Force Awakens. Lastly, there are two Porgs, new creatures that are due to make their first appearance in the upcoming The Last Jedi. I thought I was well versed in the art of Lego Star Wars, but this is something else entirely. Lego should be very proud, because the 75192 Ultimate Collector Series Millennium Falcon is the most impressive model the company has created. I’d love to actually build it and see it come together – but even at the stage at which I saw it, it’s hard not to come away drooling. Hopefully, Lego can find a spare one for me to review properly. If not, I’ll have to dig deep to find that £650. And clear my coffee table.

The Lego 75192 Ultimate Collector Series Millennium Falcon is available now to Lego VIP members. It will be on general release from 1 October 2017.