If you want, I can make this really short. If you a) like Indiana Jones – or at least the original trilogy – and you b) enjoyed the Lego Star Wars games, then you can buy Lego Indiana Jones: The Original Adventures with confidence. Just think of the Lego Star Wars magic applied to the Indiana Jones movies, and while there are some minor differences in the specifics and balance of gameplay, the overall look and feel will be pretty much what you imagine. If you want to see key scenes from the Indiana Jones trilogy humorously re-enacted in the medium of Lego, you’ve got it. If you want a nice, fun game, full of simple platform jumping and relatively simple puzzle-solving, you’ve got that too. If you’ve got an insatiable need to collect every playable character and bonus going, and you want a game that’s full of that kind of stuff, this is it. It’s only if you want something new and entirely original – and only then – that you are you likely to come away disappointed. 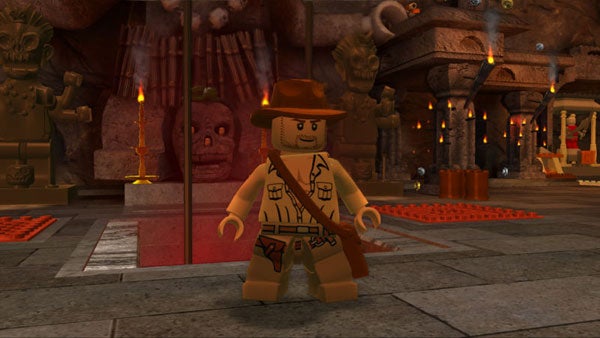 The parallels with Lego Star Wars aren’t hard to spot. Instead of the Star Wars heroes (Luke, Han, Leia, Anakin, Obi Wan, etc) we get Indy, Marion, Short Round, Sallah, Henry Jones Snr, Marcus Brody and others. Replacing Darth’s Vader, Maul and Sidious on the baddies front, we have Belloq, Mola Ram and Major Toht. Dexter’s Diner and the Mos Eisley Cantina have been replaced by the noble halls of Barnett College, and from there you can hop into any one of the three movies, with six chapters based on sections of each. Like Lego Star Wars, Lego Indiana Jones is fun when played alone, but is obviously designed for two players, the second dropping in at will with a press of the start button on the second controller. Visually, the games are two peas from the same pod, with the HD consoles gaining from nicer lighting, shinier plastic textures and slightly more detailed backgrounds. In terms of fighting, jumping, climbing and switching between characters, the controls are basically identical. Lego Indiana Jones is more than Lego Star Wars with new levels and a re-skin, but if you’re already familiar with the previous games, you’ll feel perfectly comfortable with this one. 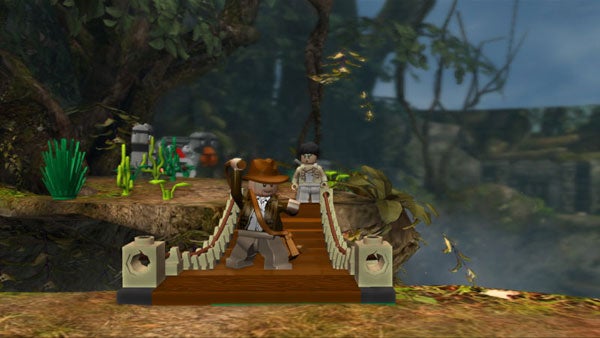 However, I think Lego Indiana Jones benefits from two things. First, Travellers Tales has now had three games to work out what works and weed out what doesn’t, and generally tighten up the game mechanics and the engine. As in Lego Star Wars, switching between characters and combining abilities is the key to solving the game’s puzzles, but here the game seems a bit more generous about how close you have to be before switching, and the AI does a slightly better job of handling characters when you’re not in direct control. And while each character still has specific capabilities which they’ll need to access certain platforms or parts of a level, there’s less of a feeling that the player playing, say, Willie Scott, is hampered in the way that players playing, say, C-3PO were in the past. Most do a decent job in combat, and there’s a pretty good balance between the different members of the cast. Sure, there will be arguments about who gets to be Indiana Jones. He’s the man with the hat, after all, not to mention the man with the whip, which comes in handy both as a weapon and as a means of hooking on to certain objects and swinging across gaps. Still, everyone can do something special. Whether you’re crawling through tight spaces as Short Round or shattering glass with your screams as Willie (nice touch) you never feel like you’re wasting your time. 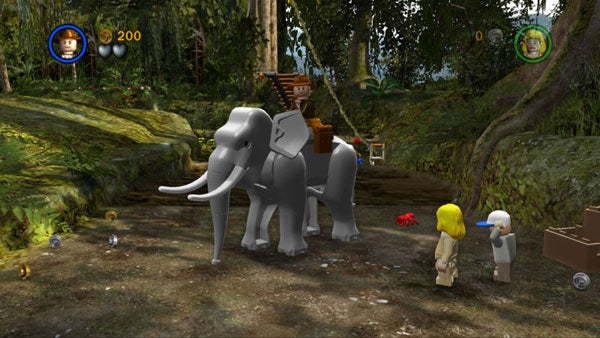 Secondly, there seems to be less of an emphasis on just running around and blasting, and more of a focus on crafty puzzles. There’s nothing here that’s going to stymie the average ten year old for too long (though your thirtysomething writer had a few difficult moments) but Travellers Tales have clearly grown more confident in the way they layer their block-building, lever-pulling puzzles so that the solution of one becomes part of the solution to the next. There are some great moments where one character will be platforming while the other moves platforms and raises ledges to assist them, and the hat-swapping trickery from Lego Star Wars: The Original Trilogy also makes a welcome return. The pacing is absolutely spot-on, and you’ll definitely have your share of eureka moments when everything falls into place. 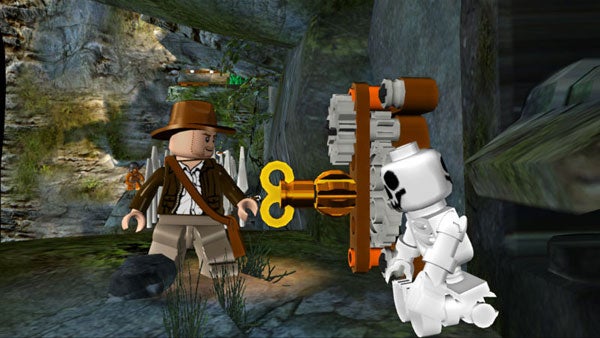 Overall, the level design is top notch. Each chapter has several parts and a number of quite extensive locations, but it’s rare that one exceeds its welcome in the way that some sections of the Star Wars games could. It also helps that the shoot-em-up sections which were a natural fit for Star Wars have no home in the Indiana Jones universe, and have so been omitted, and that the few vehicle-based levels (mostly found in The Last Crusade) are broken up with chunks of platforming and puzzling. This is one of those games that it’s almost impossible to get tired of. 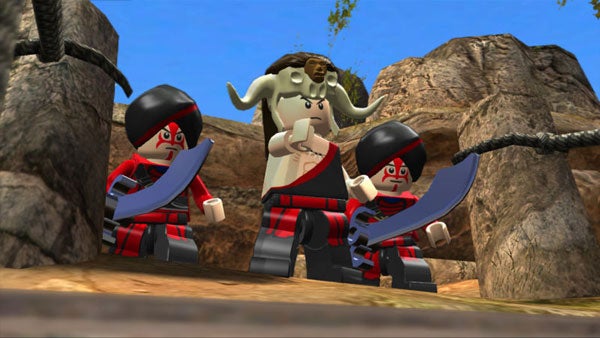 The established Lego Star Wars formula is also improved by a scattering of new ideas. For instance, some characters have phobias, such as Indy’s well-known issue with snakes, and won’t be able to cross certain areas or perform a certain task unless another character can clear the way for them first. Watching Lego Indy’s knock-kneed terror is one of the great pleasures of the game. 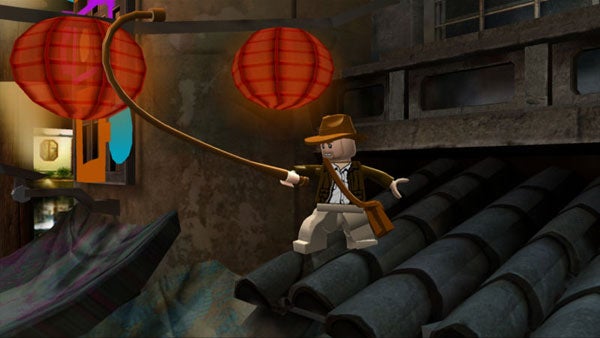 Of course, there are a few negative points. The main one – as in the Lego Star Wars games – is the camera. It’s never easy when a game has to accommodate two players on screen at once, and for much of its running time Lego Indiana Jones does a great job of zooming in and out and changing angles to keep everyone happy. When it does go wrong, however, it goes badly wrong, and usually during a particularly tough sequence of platforms when you really need to be able to see where you’re jumping to and tweak your leap towards the right place to land. When the other player suddenly goes somewhere that jerks the camera out of place midway through, this can be really annoying, though you can always blame the other guy and smack them over the head with a shovel. Do it in the game, though, if you want to avoid the legal repercussions. 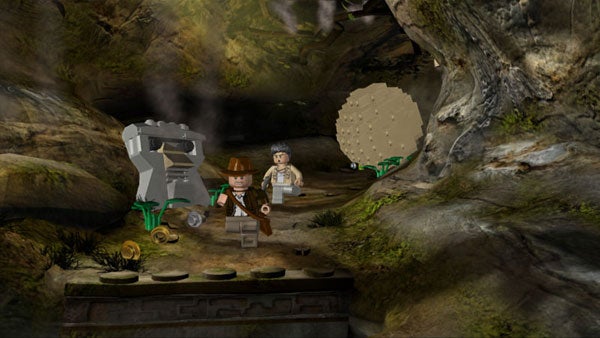 The only other flaw (bar a little screen tearing) runs a little deeper, and the blame can’t really be laid at Travellers Tales’ door. With Lego Indiana Jones, as in Lego Star Wars, the longevity isn’t in finishing the three sets of chapters in story mode (which you can probably manage in nine hours or less) but in going back with different characters in freeplay mode to unlock every last character and every last bonus. For instance, only Thugee characters are able to open certain areas through ritual statues, while some areas in the Raiders chapters need Short Round or a Nazi officer to open. There are over 60 characters to collect and several bonus models to construct, but in a lot of ways the Star Wars universe is more suited to this sort of thing. Plenty of us grew up with an encyclopaedic knowledge of even the most secondary Star Wars characters, our fascination fuelled by the figures, the comics and the novels. Is the same true of Indiana Jones? Not really, and as a result the collection aspect isn’t quite as compulsive this time around. 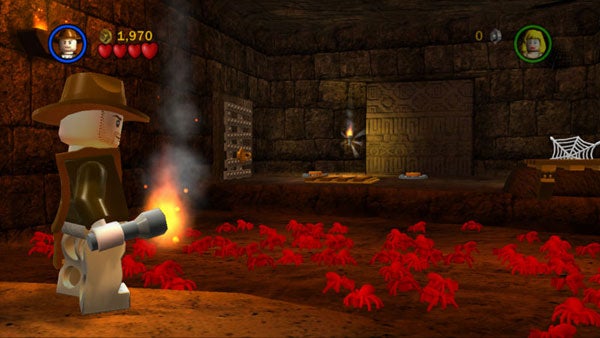 All the same, this is every bit as lovable and infectious a game as the Lego Star Wars titles – even if it won’t last quite so well long-term. It’s still a great game to play with small kids – and a great game to play with the big kids who grew up with movies. In fact, I wouldn’t want to waste my time on anyone who could sit through the cut scenes without giving off at least a smirk. In a way, Lego Indiana Jones raises the stakes for the upcoming Lego Batman, just because we might need to see something different next time around, but while I can’t imagine anyone saying that this is the best single game they’ve played this year, I doubt I could find anyone who really wouldn’t like it. It’s Lego. It’s Indiana Jones. It’s a whole heap of fun. What else is there to say?


Lego Indiana Jones isn’t a huge departure from Lego Star Wars, but the puzzles and level designs are generally better, and the nostalgia factor still works like gang-busters. Warmly Recommended.