What is the LEGO The Incredibles 2 Juniors?

Few films have been as anticipated as Disney Pixar’s The Incredibles 2. It was a long 14-year wait for the sequel to the animated superhero blockbuster, but now we don’t just have a movie, there’s also a tie-in range of The Incredibles 2 Junior LEGO sets that bring the action to the real world.

For those unaware, LEGO’s Juniors range sits between traditional LEGO and DUPLO sets, which come with larger blocks aimed at toddling master-builders. Aimed at 4-7 year-olds, LEGO Juniors is fully compatible with the usual LEGO pieces, but is simple enough to put together that younger children can enjoy without frustration.

This is all helped by the accompanying glossy instruction manuals, which IKEA would do well to emulate. These colourful booklets dedicate a page for every step, adding only a few pieces per page. This makes the build super-easy to follow, with even my three-year-old able to help complete the sets.

The pieces included in each build are also separated into several packets, meaning you only have to deal with the pieces required to make a building or vehicle, rather than having to rummage through the whole set for that elusive piece.

There are three LEGO The Incredibles 2 Junior sets to choose from ranging in price and number of pieces. Each comes with its own heroes and villains, so if you want to collect all the characters then you’ll need to invest in all three boxes. Elastigirl features twice, once with long bendy arms and once as a traditional LEGO figurine.

We’ve built all three sets and they look great individually, or combined into one big LEGO The Incredibles 2 world. 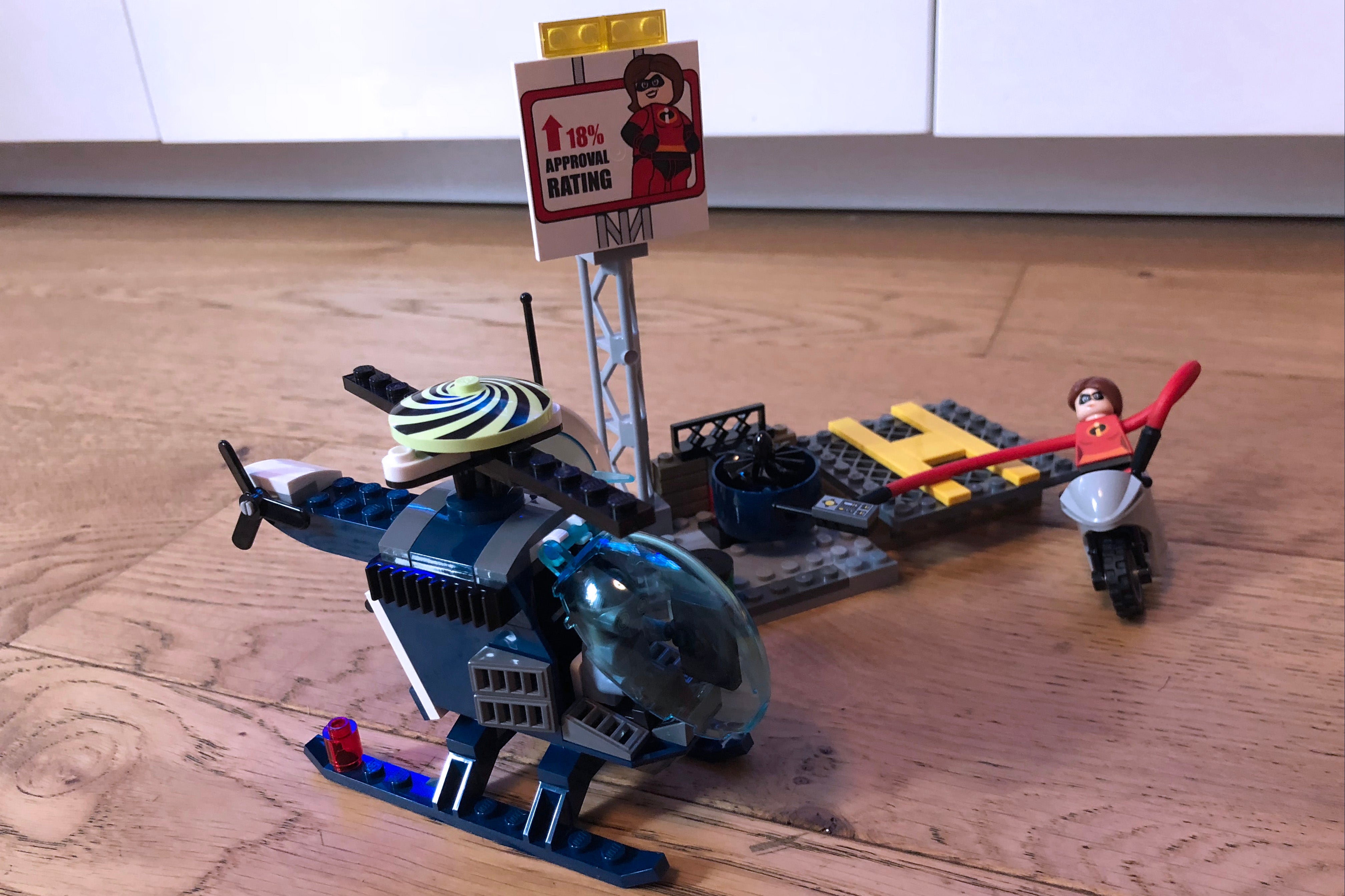 The cheapest set in the LEGO The Incredibles 2 Junior range is also one of the most fun. This is because it comes with a nifty little helicopter that has space for a pilot, and Elastigirl’s motorbike.

There are only two characters in this set, but one is Elastigirl with long, flexible arms; and unlike anything you’ll be used to with regards to LEGO figurines. The antagonist is the creepy Screenslaver, complete with a tiny laptop that opens and closes.

A rooftop section completes the set with a billboard, turbine and helicopter landing pad adding some colour to proceedings.

With just 95 pieces this is quite a simple build, taking around 15-30 minutes to put together at a leisurely pace with a child. 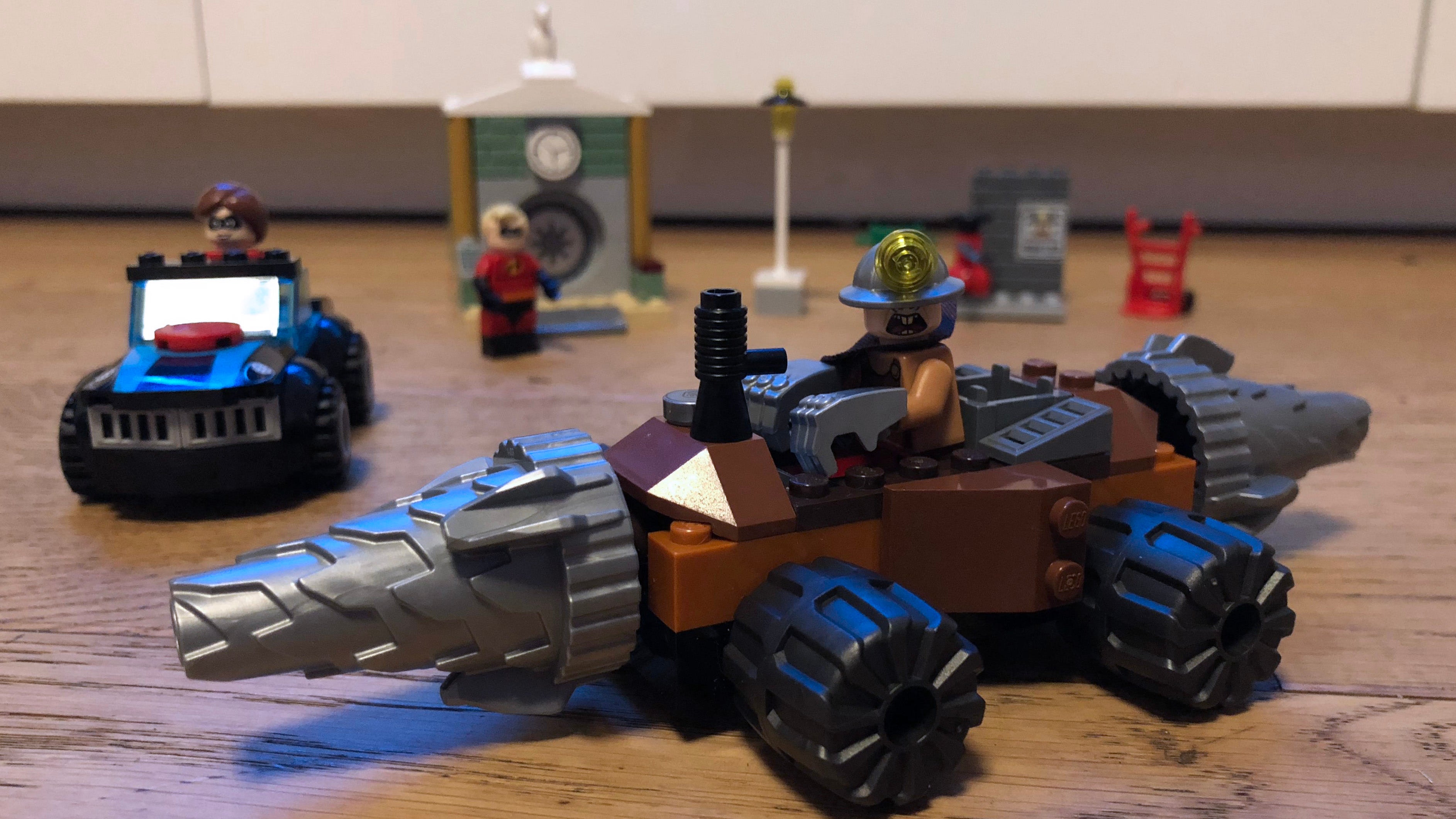 The Underminer isn’t a nickname for that annoying person at work; he’s the nefarious character we were introduced to at the end of the first The Incredibles movie.

He has an awesome double-drill vehicle called the Tunneler, which he can use to drill into the bank vault to steal all the precious gold and jewels. The bank vault comes with a breakaway door that can be knocked through with the drillsb and behind it is a nifty little safe with bars of gold and money bills that can be added via a see-through door or a small slot. Kids really enjoy posting the bars through the letterbox and filling the safe, only to empty it time and again.

The heroes of the piece come in the form of the husband and wife team of Mr and Mrs Incredible. There’s also a second vehicle, the Incredibile, that comes with a flaming exhaust.

Made up of 149 pieces, this build is a little more complicated than Rooftop Pursuit. However, again, the step-by-step instructions make it a doddle to put together. Expect it to take between 20-30 minutes with adult supervision. 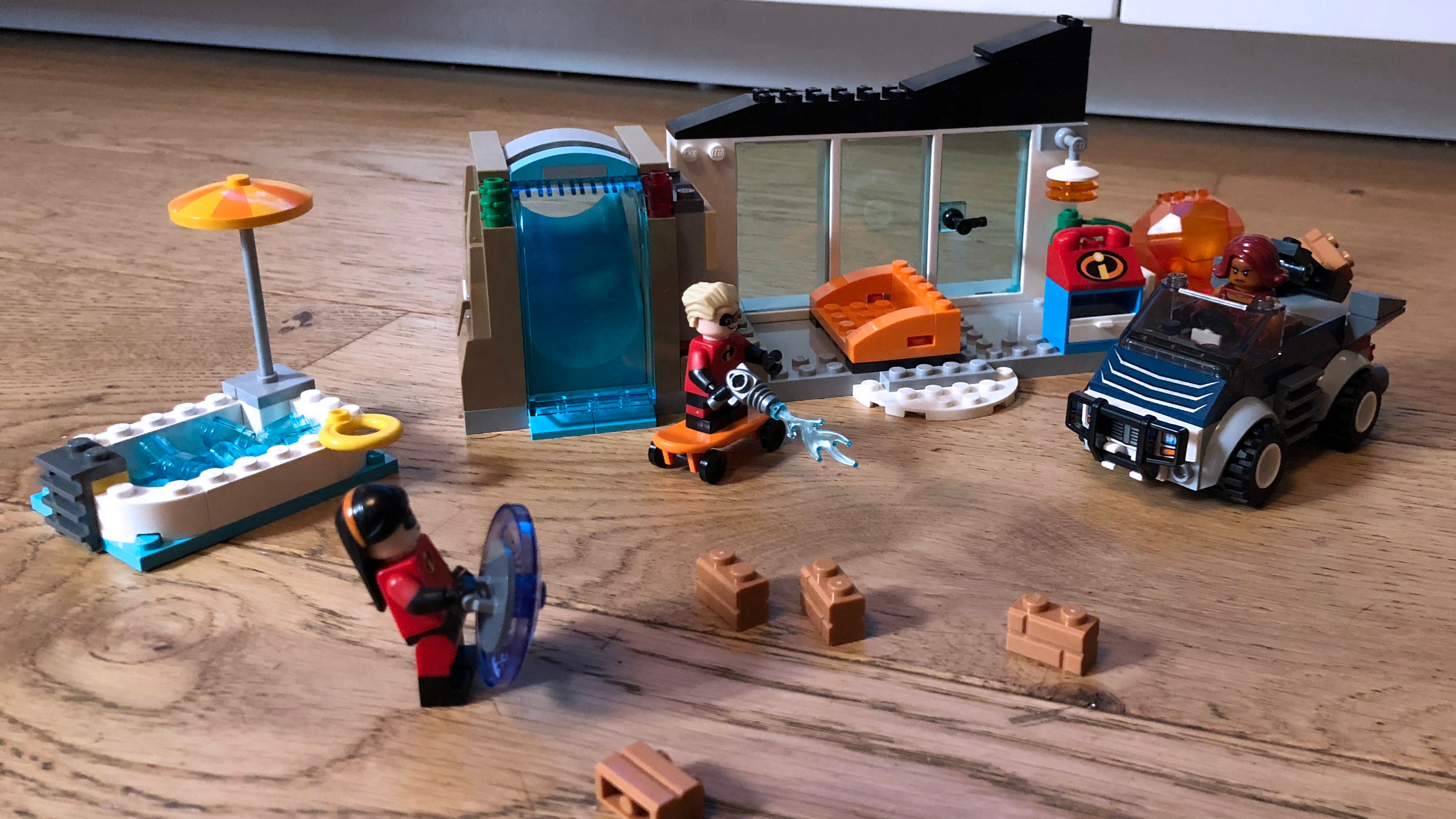 The daddy of the LEGO The Incredibles 2 Junior sets comes in the form of The Great Home Escape.

In this set Evil Brick is attacking the Incredibles’ home, with Violet, Dash and baby Jack-Jack there to protect it.

This is the most complex build, mainly a result of the house and numerous moving parts. Younger children may need help installing the doors and windows that need clipping into the frame, but it isn’t too tricky.

Even though the vehicle that comes with this set isn’t as engaging as the helicopter and driller in the other sets, it does have a small catapult that lets you hurl bricks at the protagonists with a tap of the finger (albeit not very far). Violet can protect herself with a force shield, while Dash has a skateboard on which he can dart around to avoid the flying bricks. 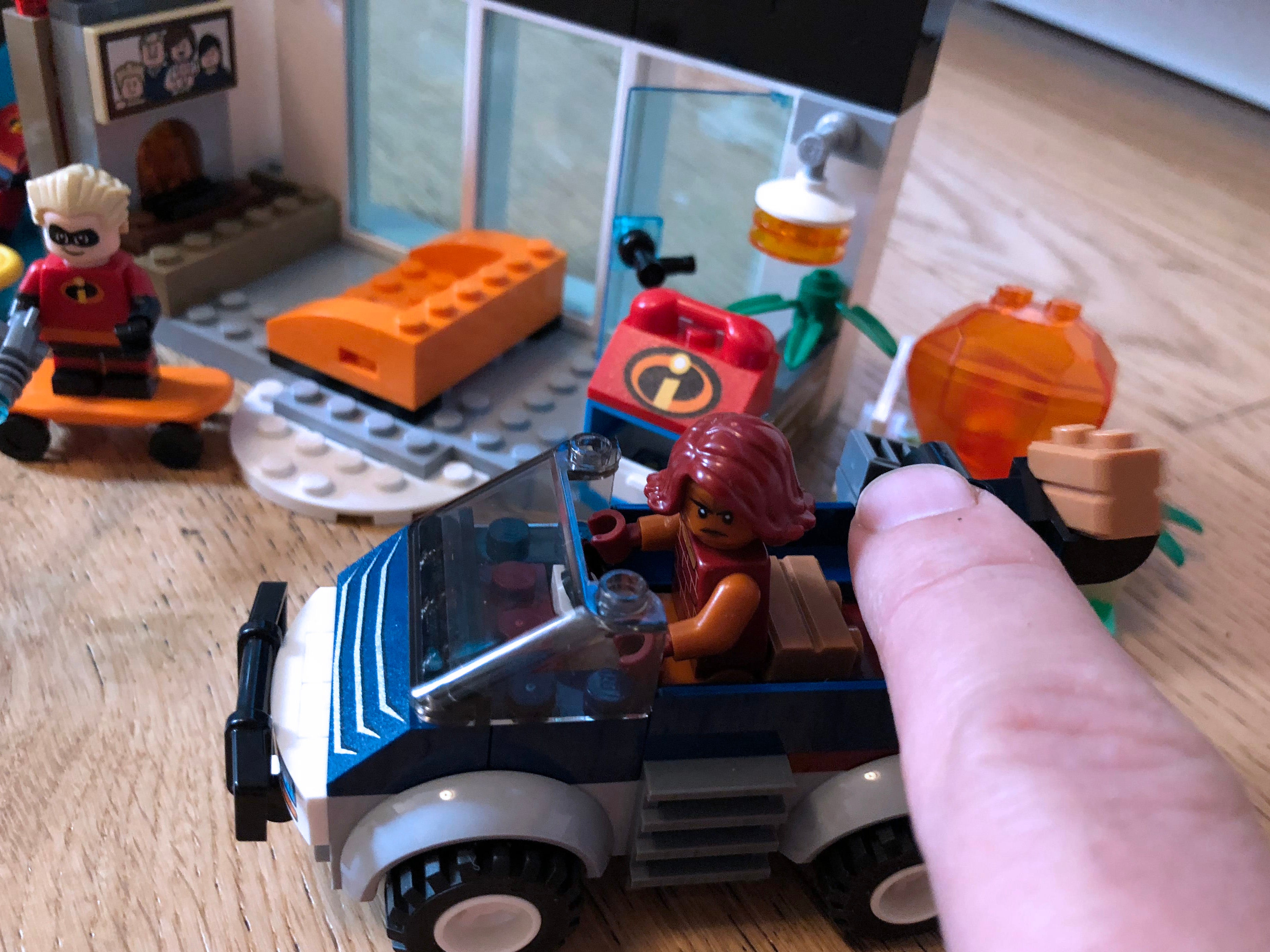 Jack-Jack is as adorable in LEGO form as he is on the big screen. The diddy little figurine is a weapon is its own right. Encased in a ball (meant to represent a fireball), Jack-Jack can be launched from his own catapult to rain fire down on Brick.

The house is the main hero of this set, though. With opening doors, a sliding fireplace and drawer, plus a waterfall slide, there’s plenty to tinker with. The set is completed with an outdoor pool with a water cannon.

The LEGO The Incredibles 2 Junior sets are great fun for kids and relive some of the best scenes in the movie.

The colourful instruction booklets are brilliant, providing perfect step-by-step instructions for children (and parents) to follow. However, as with all LEGO other than DUPLO, there are lots of small, loose, pieces to misplace, or that could be a hazard for younger toddlers in the household.

These sets also feel like they’re meant to be kept whole, not necessarily being used for creative builds – although there’s nothing stopping you from creating mashups. That said, there’s plenty to play with and enjoy, especially for fans of the The Incredibles movies.