With its gleefully mischievous cast and a few new mechanical tricks, Lego DC Super-Villains is a refreshing twist on the trusted Lego game formula. It's a shame that long-running glitches that have plagued the series for years still rear their ugly heads, but subtle improvements across the board make them tolerable, in large part because there's so much else to like.

Chances are, anyone reading this knows the drill when it comes to Lego games by now – step into the uniformly square shoes of characters from [insert beloved pop culture institution here], play through roughly a dozen levels of brick-smashing battles and puzzle platforming, then return to each of them with different characters to gather up every locked off collectible, before rinsing the hub area for its own hidden treasures.

That’s still the case with Lego DC Super-Villains, which sees the assorted bad guys of DC Comics take the spotlight for a change, rather than their do-gooder counterparts. But brace yourself – there’s actually enough new ideas and fresh humour to make this worth a look for even the weariest player of Lego games past.

The biggest change is that the custom character creator – usually something you may only dig into once to get the attendant trophy or achievement – is now integral to the game. It’s the first thing you do, in fact, fashioning a personalised super-villain from scratch, which then becomes a central character in the story.

The creator tool itself is massively improved, with a staggering array of options that provide minute detail in everything from appearance and basic abilities to weapons and personality. That latter category should really be labelled ‘flair’ or something similar though, as it covers incredibly minute but welcome details such as the design of your targetting reticule – visual flourishes that set your character apart, rather than a navigable psychological profile. 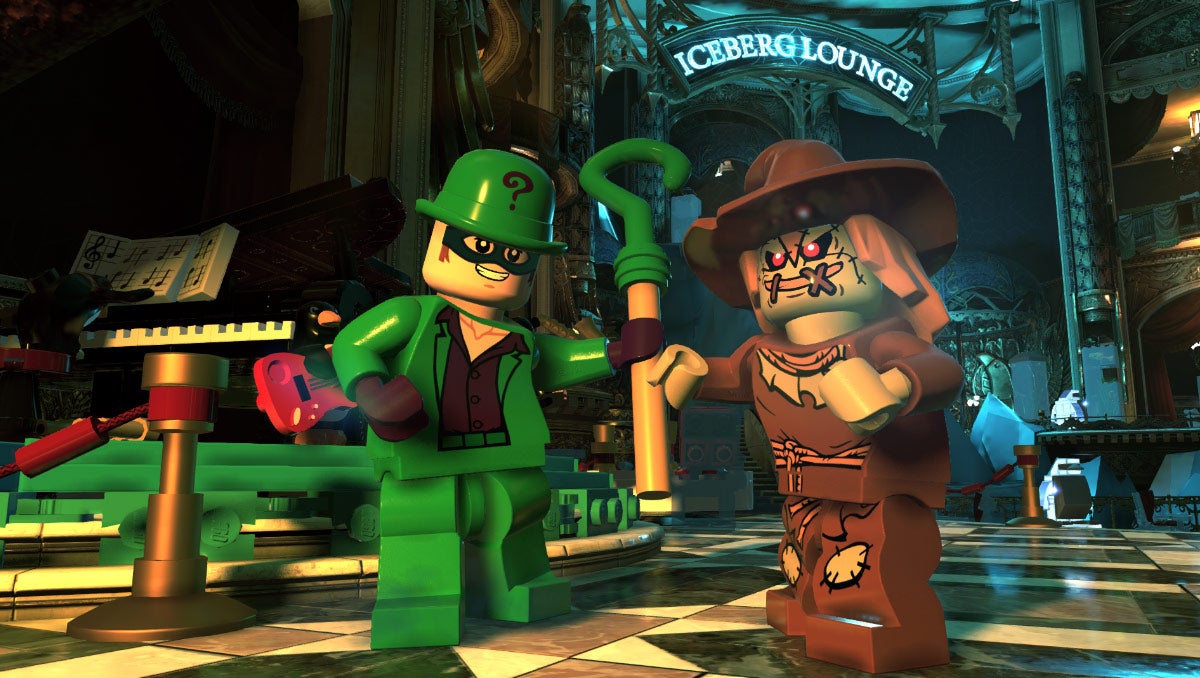 Your creation starts the game as a prison escapee alongside Lex Luthor, but proves a powerhouse by being able to absorb new abilities from strange energy chambers during the game’s story. Whatever starting abilities you give them, they’ll gain the likes of heat vision, super strength, size changing, and several more as you progress, all relevant to the plot and mechanics of the game. After countless Lego games where the creator suite felt little more than an afterthought, it’s great to see it so skilfully incorporated into the bones of the experience here.

‘Doctor Don’t-Say-Much’ – as you’ll later be nicknamed by Harley Quinn in one of the many fourth-wall-breaking jokes – needs all the powers they can get, too, as the game finds DC’s worst criminals left to their own devices when the Justice League is dispatched by the Crime Syndicate of America, a group of nefarious doppelgangers to the heroes from the inverted universe of Earth-3.

It’s a nice approach to the story, explaining the absence of the typical heroes, while allowing the usual villains to have something of a heroic turn against even greater foes without losing their evil edge. The multiversal tale also allows TT Games to dig deep into comic book lore, which should please hardcore fans of the source material.

It’s not all bad (guys) though – there are a handful of superheroes to be unlocked, including Teen Titans favourites Raven, Kid Flash, and Beast Boy, and Batfamily members Nightwing and Batgirl, making for a fully rounded DC package. 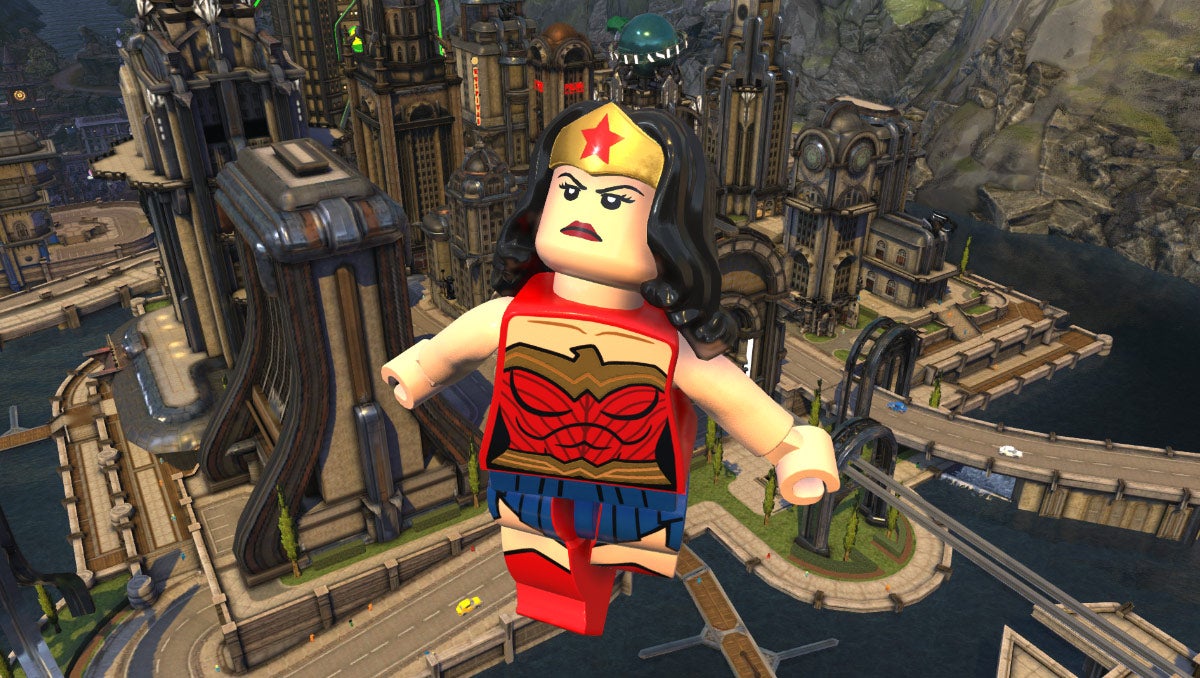 It’s clear TT Games are relishing the chance to be a little bit bad with their criminal cast here, with a wicked edge to the comedy and the dialogue that most Lego games lack. Even the soundtrack has a rebellious edge, with hard rock band Wolfmother’s ‘Joker and the Thief’ serving as the signature track throughout. It’s a nice change from the cloyingly upbeat nature of previous Lego games, without ever serving up anything unsuitable for the target demographic of younger players.

Combat is notably improved, as enemies now have improved AI and tactics to overcome. Opponents with shields actively block your attacks from the front, requiring you to outflank them, and foes with ranged attacks now have animated cues to look out for, allowing you to dodge or react. Ultimately, there’s still no real challenge – if you’re beaten, you immediately respawn with no discernible penalty – but there’s a little more substance to it all than totally mindless button bashing.

Other, smaller improvements abound throughout the game too. The character selector, available in free play mode or hub world areas, now lets you filter characters by special ability; particularly useful when you have more than 160 characters in total, some with multiple forms and different power combinations. Hub areas themselves are more navigable, with an easier-to-read radar for locations of interest, and they feature more to do with side challenges to complete at your leisure.

However, it frustrates that a lot of the familiar Lego title bugs persist. To an extent, I get it – despite their surface simplicity, the Lego games are in essence lengthy Rube Goldberg machines where, in story mode at least, each level is a complex chain of cause and effect, each action needing to be completed in order to trigger the next. 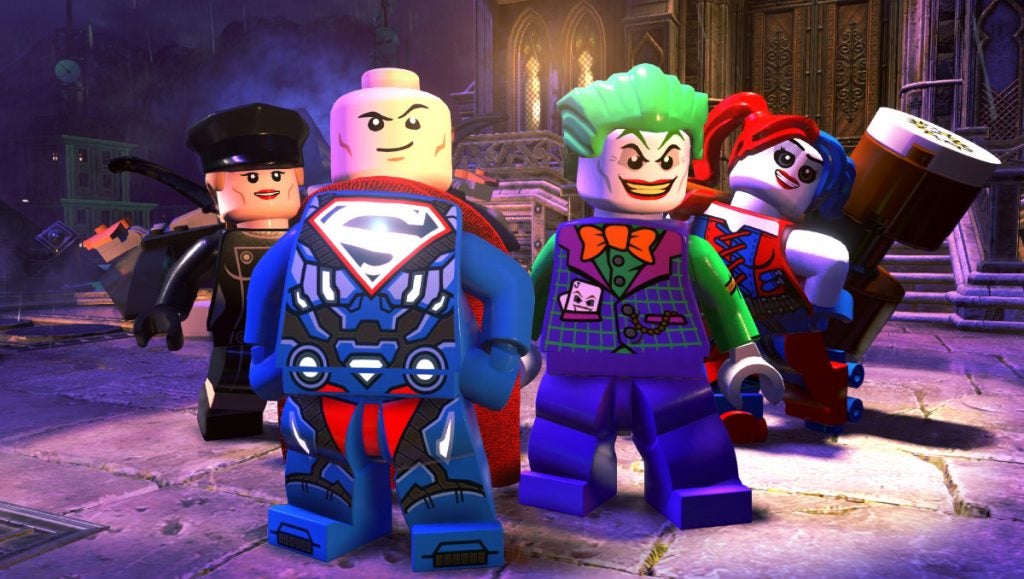 The very nature of Free Play, where you can take characters with you boasting any ability, lets you break that machine, reaching areas before you ‘should’ be able to. Yet at this point, after (by my count) 24 games, I shouldn’t still be facing levels needing to be reset because I picked up a collectible before triggering a certain story event.

At least levels are split into two or three acts now, so if you’re hunting a certain item and are faced with a bug, you don’t have to replay everything. That doesn’t help address bugs in the hub area though, such as when I swapped characters only for the game to arbitrarily decide it wasn’t going to let me switch back or bring up the character grid. That took resetting the whole game to resolve. Or when, in a scripted section leading up to a story level, a lift at the Suicide Squad’s prison base refused to open once I’d entered it. Or why characters and items occasionally refused to spawn, again requiring a reset.

Further, while not a bug, it jars that vehicles – again, after two dozen games – still have terrible controls. Mercifully, they’re rarely essential in order to complete the main campaign, but with multiple collectibles and objectives in the open world locked behind vehicle races or time challenges, their poor handling makes them a chore for completionists to tick off rather than any real fun.

Lego DC Super-Villains isn’t a perfect Lego game then, but at this stage, I don’t think that’s even achievable until TT Games redoes the core model at the heart of this franchise of franchises. That said, this is arguably the best Lego game in a long while, with sharper writing, better combat, and plenty of fan service for comic book aficionados.

With its gleefully mischievous cast and a few new mechanical tricks, Lego DC Super-Villains is a refreshing twist on the trusted Lego game formula. It’s a shame that long-running glitches that have plagued the series for years still rear their ugly head, but subtle improvements across the board make them tolerable, in large part because there’s so much else to like. A love letter to fans of the comics and the earlier Lego DC games alike, this makes it clear it’s good to be bad.