What is the LEGO Creator Expert: Downtown Diner?

Despite the name, the kitsch American diner only inhabits the ground floor of this three-storey 1950s-style building. There’s also a boxing gym in the middle and a recording studio up top.

This is a mammoth set that offers a decent build time and involves loads of techniques. Few LEGO sets offer better value than this.

The LEGO Creator Expert: Downtown Diner (no.10260) went on sale January 1, 2018 exclusively from LEGO Retail stores and the LEGO site. What a great way to start the new year.

LEGO Creator Expert: Downtown Diner – What do you get?

The box contains a whopping 2480 pieces. To put that into context, the First Order Heavy Assault Walker and First Order Star Destroyer from the Star Wars range are the same price and both have over 1000 pieces fewer. For a non-licensed comparison, the Palace Cinema – the same price but in the Modular Buildings series – has 2194 parts. Numbers aren’t everything, but you definitely won’t feel short-changed here.

In the usual LEGO tradition, the pieces are split into numbered bags that correspond with sections in the instructions. In this case there are five sections, and each one comprises at least five bags of pieces. There are also a few loose larger plates for the base and floors. 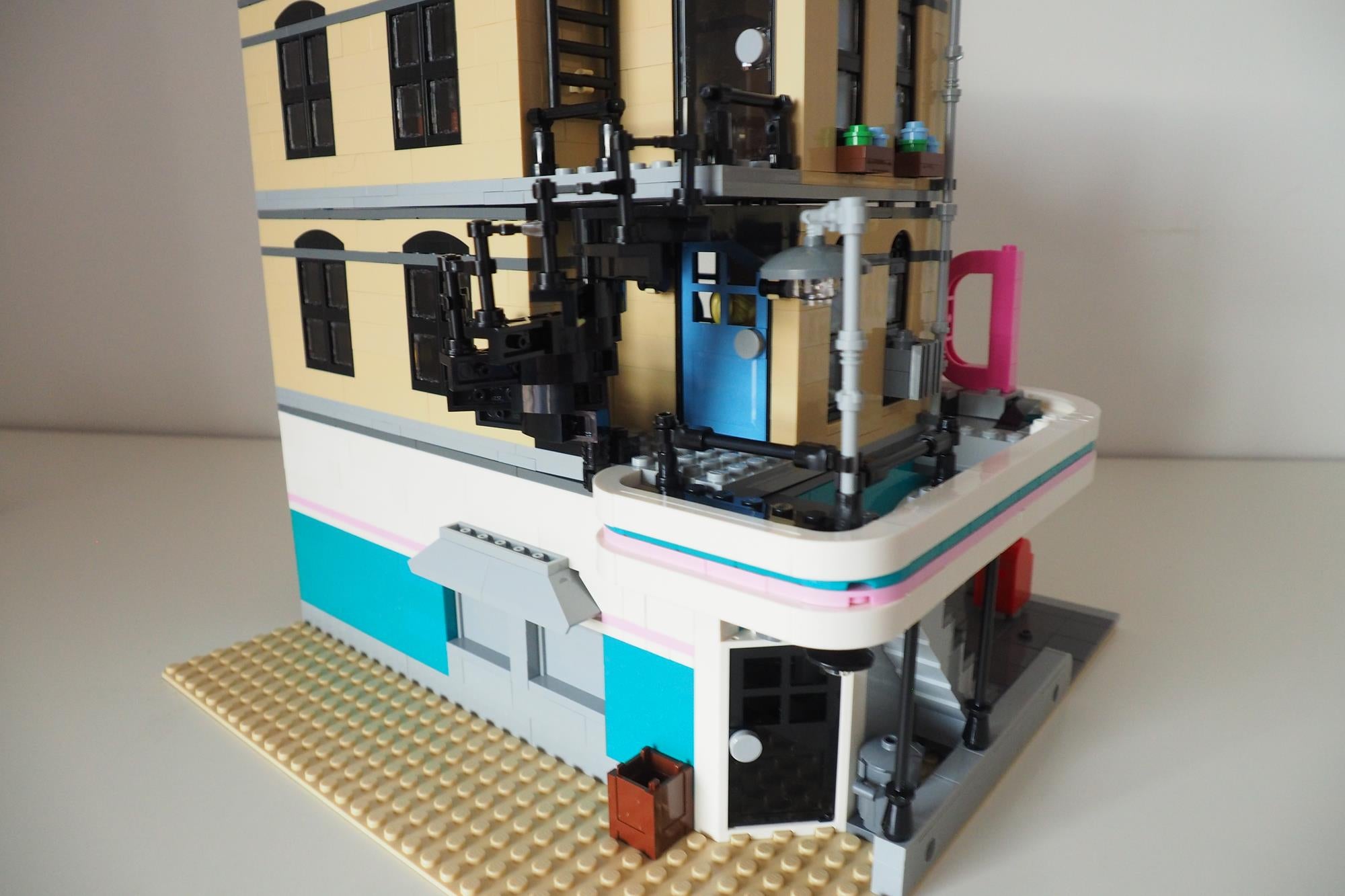 New for this particular set is an exclusive brick colour: teal. These are mostly used for the curvaceous Streamline Moderne full-height window surround that dominates the fascia, but also for some of the ground-floor wall.

There are six mini-figures included: a chef, waitress, boxer, rock star, manager, and a bodybuilder. The highlight is the be-quiffed rock star, with one of his dual faces having its eyes shut and a classic Elvis lip curl. Rollerskates for the waitress are also a nice touch.

LEGO continues to use yellow plastic for its non-licensed figures’ skin. As this is part of a modular series and all the other parts of town are populated by yellows, it really wouldn’t have made sense to change things here. That said, I’ve become used to the more realistic tones used in the Star Wars sets, and I think we could all cope with LEGO choosing a variety of ethnicities for us. One day, maybe.

In addition to the main three-storey building, there’s also a suitably 1950-style pink soft-top to drive outside. 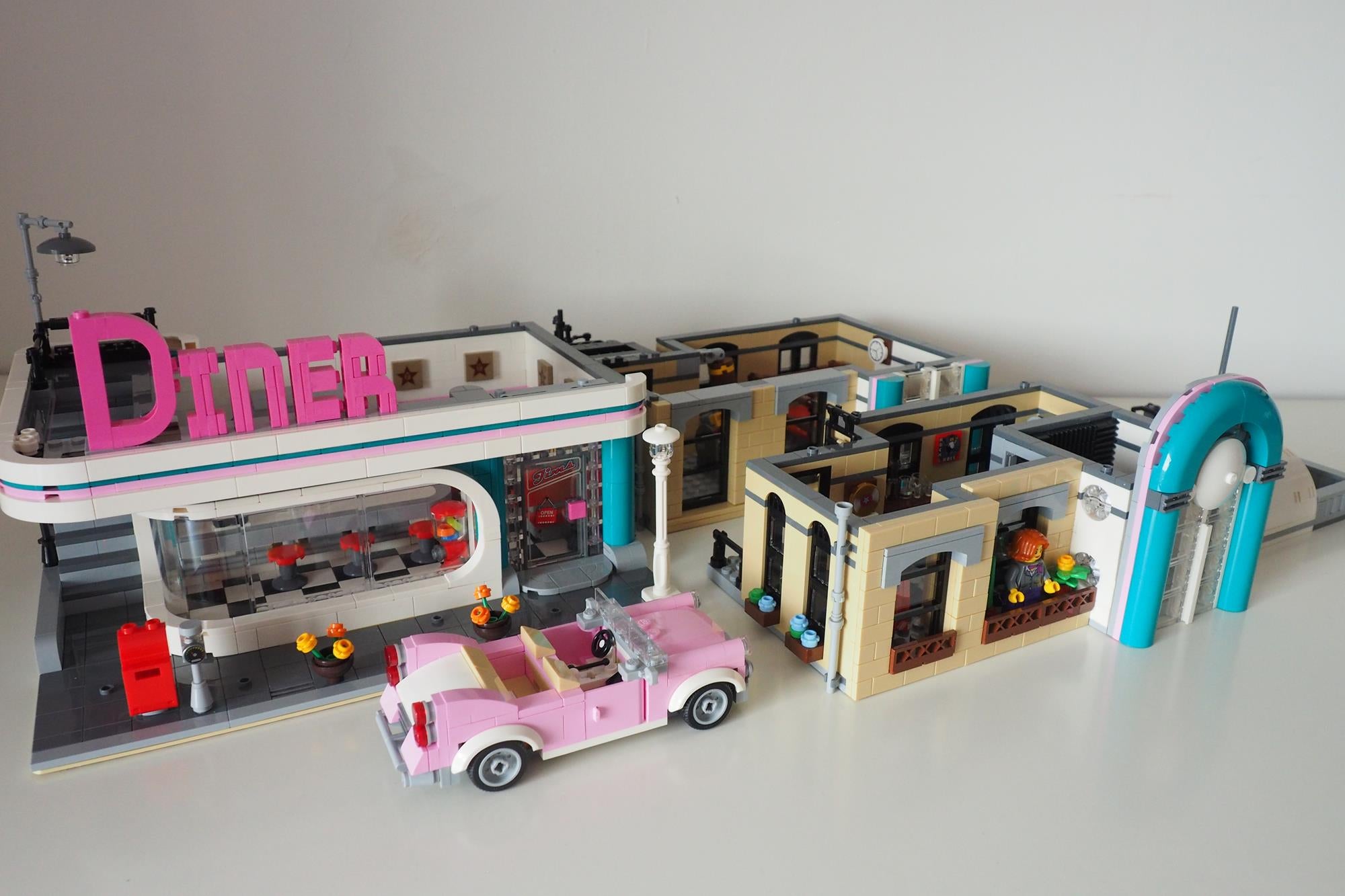 LEGO Creator Expert: Downtown Diner – How fun is the build?

In total I spent around six hours on the build, without rushing it. As ever with LEGO, the instructions are superb and every piece was present and correct – plus a few spares.

There’s a nice mix of building techniques involved, and there’s a minimum of repetitive actions. Even then, one of the few repetitive parts of the build results in one of my favourite objects: the outdoor spiral staircase leading to the recording studio.

Logically the build is split by storeys, since each can be removed separately for access to the rooms. The final section is the roof and that sweet convertible.

Purists will be pleased to discover that there are no stickers whatsoever. A few printed tiles add some extra detail where necessary. LEGO Creator Expert: Downtown Diner – How does it look?

The Creator Expert buildings are brimming with inventive touches, and this one is no exception. The ground-floor diner has a super-cute jukebox, a gumball machine, coffee percolator and a lovely chequered floor, among other things. That curved corner window and pink sign are just stunning, too. Moving up to the first floor and through the door of the gym, details include a punchbag on a ball joint, a weight bench and a boxing ring – but it’s hard not to be drawn to the water-cooler. 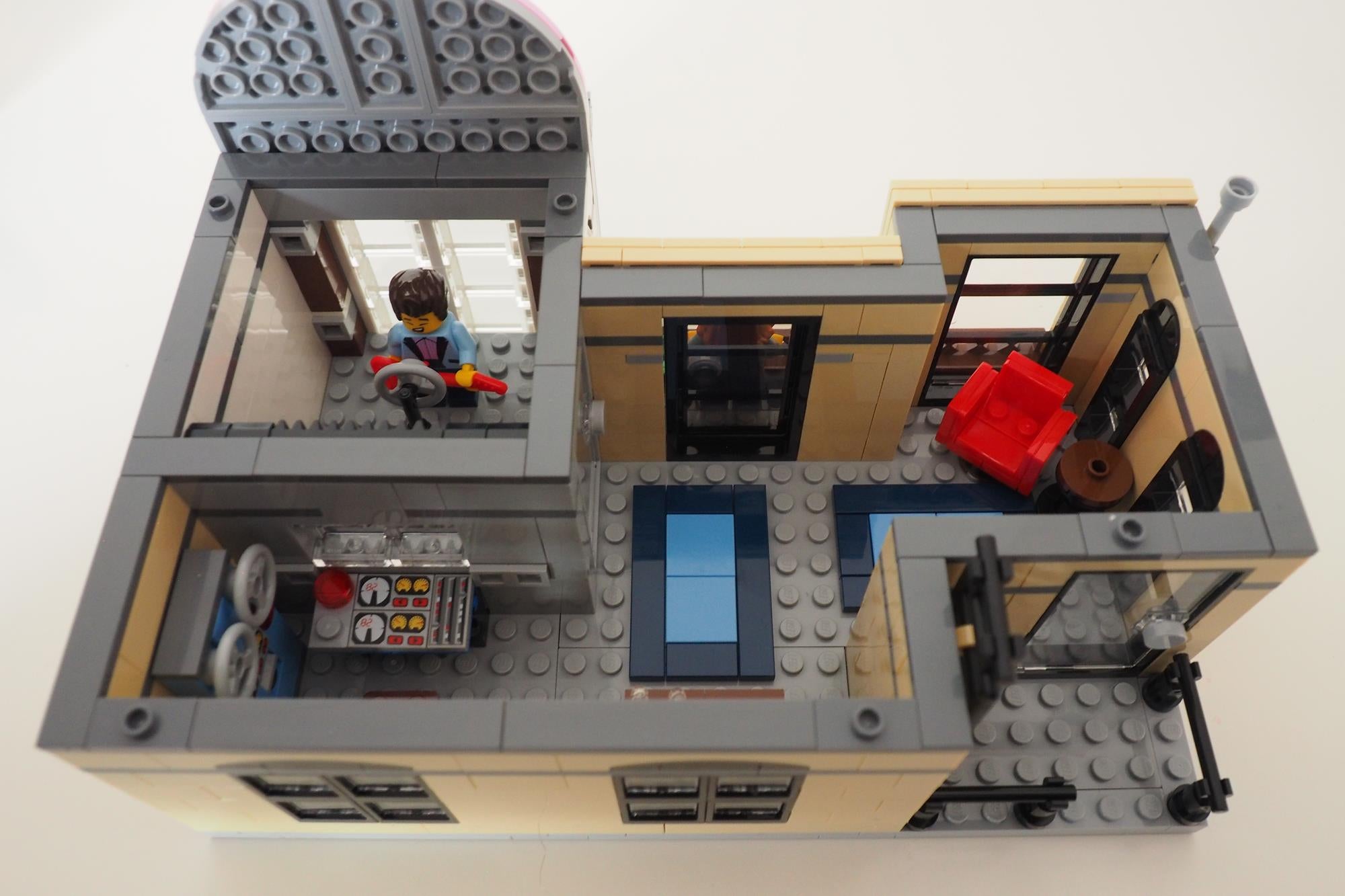 Up to the top-floor recording studio, there’s a sound booth with microphone, a reel-to-reel tape recorder and mixing desk, and other sweet touches such as a gold record on the wall.

Each floor is large enough to reach in and rearrange or for play, which hasn’t always been the case with some of the Modular Buildings range. Each individual storey is sturdy enough to be removed individually without falling apart, too.

But enough about the interior, because the overall exterior styling of this set is simply stunning. That glossy teal on the rounded pieces works so perfectly with the two tones of pink to give an aesthetic that’s so 1950s it might as well have James Dean’s DNA embedded in the plastic.

And the small details don’t let it down, either. Drainpipes, lamps, postbox, parking meter, flowerpots – it’s all there. There’s even an air-con unit on one of the windows. Even the roof has some interest, with an opening skylight that can be propped up at different angles on a strut.

Perhaps the only blip in the entire set is the car. It’s pretty cool, and the right idea, but it just looks a little too angular and crude compared to all those curves on the building itself. The windscreen is particularly inelegant. Much the same could be said of the limo that comes with the Palace Cinema (no.10232). In both cases, it’s best to think of the cars merely as bonus builds bundled with what are already awesome sets.

If you already have a Modular Buildings town growing in your LEGO collection, you need this – it’s one of the most beautiful sets in the series, and probably the most striking. Equally, if you’ve yet to start building your blocky metropolis, this is the perfect starting point. Hell, even as a standalone model, it’s worth owning just for that gorgeous Streamline Moderne styling.

A stunning LEGO set that offers great value and is brimming with inspired design touches.