I think most of us who loved the Lego Star Wars games and Lego Indiana Jones had the same fears about this one: could Traveller’s Tales keep its Lego series feeling fresh and stop it getting formulaic, and could the series survive without a big movie trilogy to work with. After all, we’ve had so many Batmans, from the sixties series to the Tim Burton movies to the animated sagas and the more hard-edged hero of Batman Begins and The Dark Knight. And that’s not counting the original comics, the Frank Miller classics or the more recent Jeph Loeb version. Whose Batman were we going to get, and how could Traveller’s Tales make the gameplay and humour work without a familiar story and iconic scenes to build on? 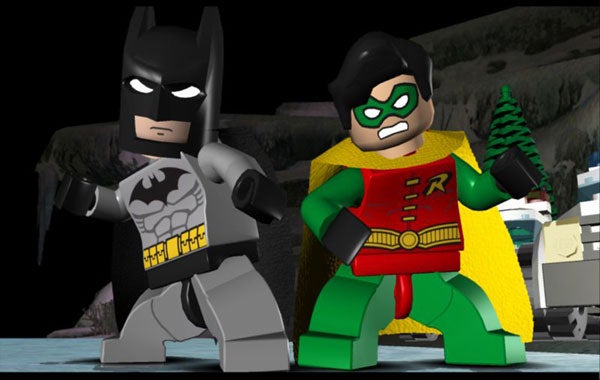 It turns out that we needn’t have worried on either count. While Lego Batman still shares its look, its feel and its core game mechanics with the existing TT Lego games, it still managed to bring enough cool new stuff to the party to make hours melt away without you really noticing. And in a way, adapting a toy based on Batman has given TT license to create its own Batman universe and its own story and make it recognisably Batman, but fun. You can see elements of Batman and Batman Returns, of the sixties TV series and the cheesier cartoons, of the great animated series and the classic comic strips – even some echoes of the rotten Joel Shumacher ‘nipples on the Batsuit’ films. This isn’t Christopher Nolan or Frank Miller’s Batman, but it’s one that fits the affectionate, high-camp tone of the Lego games.


The premise revolves around that classic Batman chestnut: order has broken down at the notorious Arkham Asylum and all the legendary Batman villains have escaped. The Riddler has teamed up with Two Face, Poison Ivy, Mr Freeze and Clayface. The Penguin with Catwoman, Killer Croc, Bane and Man-Bat, while the Joker has hooked together with The Scarecrow, The Mad Hatter and, erm, Killer Moth. Three groups of villains, three sets of missions to go through. It looks like Batman has his work cut out. 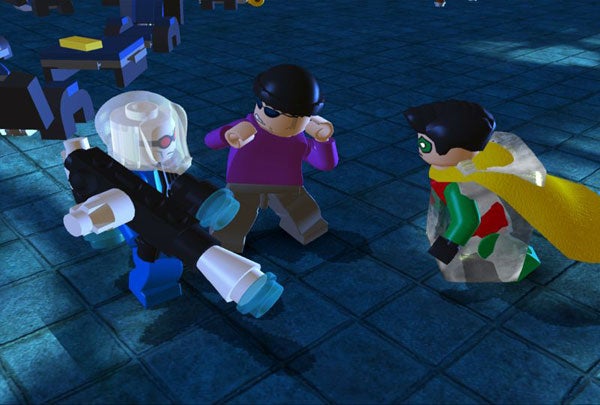 Luckily, he’s not unarmed and alone. A second player or the CPU controls Robin, with control switching between the two heroes in a single player game as it did in previous TT Lego efforts. The dynamic duo explore level after level of the same sort of platform/puzzle mayhem we saw in Lego Indiana Jones, duking it out hand to hand with hordes of lackeys, smashing up the scenery into collectible Lego pieces, turning little piles of Lego into machines, vehicles, ladders and stairways, and using grapple guns and rope lines to get around. It’s fast, it’s frantic and there’s rarely a dull moment to be had. 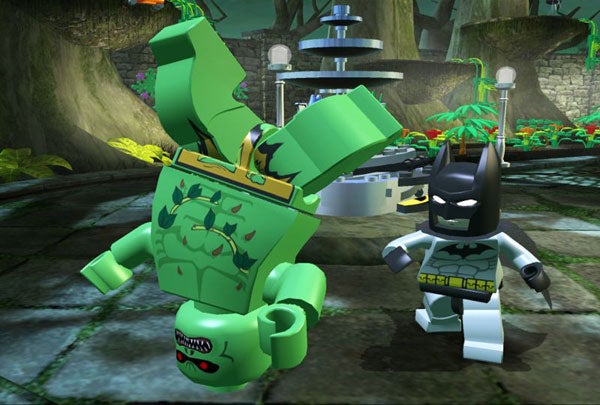 As with Lego Indiana Jones, the gameplay is more puzzle-focused than it was in the original Lego Star Wars games, but here the crux of the conundrums lies in a system of swappable suits. By discovering or rebuilding suit-swapping pads Batman or Robin can change their normal duds for special purpose costumes with specific capabilities. For instance, in one suit Batman can dispense and detonate explosives, while in others he can glide or withstand high temperatures. Robin gets to choose between magnetic boots, a robot control costume and a little vacuum cleaner that collects certain Lego pieces then dispenses them into a machine where they become something useful. Most of the puzzles are a case of using one hero in one suit to reach a tricky area so that they can activate something to give the other hero access to another area, so that they can then drive a vehicle or press a button to get to the next section.

The combination of the combat and the puzzles should get monotonous yet it doesn’t, partly because both aspects of the gameplay are so well refined by now, and partly because these are the best, most dynamically paced levels we’ve seen in any TT Lego game; more varied than those in Lego Star Wars, but not as sprawling and repetitive as some of those in Lego Indiana Jones. Lego Batman is so good that even the boss battles are enjoyable – and I’m a man who regularly moans about such things. More amazingly, while the vehicle based levels that dragged Lego Star Wars down a bit are back, they’re actually short and sweet this time around. 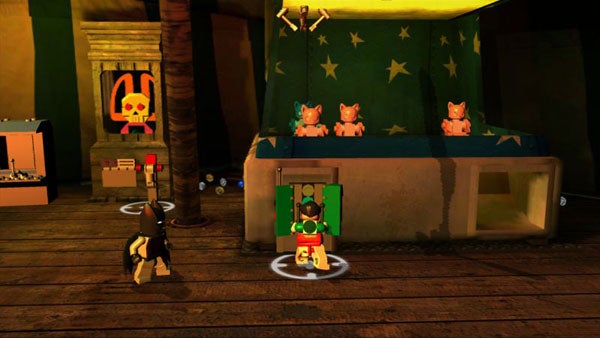 And just when you complete your first chapter, thinking it can’t get much better, another treat arrives. In Lego Batman the Batcave stands in for The Cantina in Lego Star Wars or the college in Lego Indiana Jones, acting as a mission hub and an area in which to buy new characters or upgrades with the Lego pieces you’ve collected. Finish a storyline, however, and a new option appears: to switch to Arkham Asylum. In doing so you can play through another set of missions, running parallel to the Batman and Robin missions in the chapter you’ve just completed. Here you play as the villains, and I think this could be the key to the game’s long term popularity. Each villain, whether Clayface, The Joker, Mr Freeze or Catwoman, has his or her own tricks to complement Batman and Robins’ suits. Strong characters can lift or pull heavy objects, Mr Freeze can freeze hostile guards or areas of liquid, and The Riddler can use mind control on hapless saps and get them to do his dirty work. 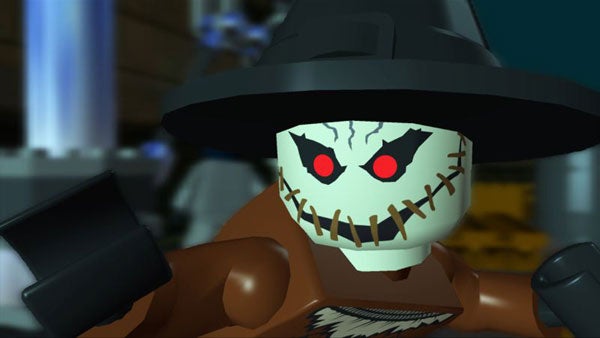 Each mission, therefore, gives you a slightly different variation on the established gameplay formula, and while elements of the level will be familiar from the Batman and Robin missions, each still feels different enough for you not to mind. Completing these villain missions also unlocks that character for other missions in Freeplay mode and as Lego Batman – as with all TT Lego games – is chock full of hidden sections, Lego pieces to collect and concealed Lego parts to find, there’s a certain appeal to returning to already completed missions with a new character just because you’re sure there’s something you missed last time that you can unlock this time around.

Basically, Lego Batman is a blast, and old favourites like the character mixer and the ridiculous costume upgrades only add to the fun. Even though you won’t know the scenes this time around, the sense of humour is still infectious, treating Batman as a slightly stiff hero, Robin as an over-exuberant and foolish sidekick and giving certain villains – particularly the lovably goonish Clayface – an appeal that they never really had in the comics or cartoons. And the sizable, larger than life cast helps the game get past the central problem with Indiana Jones – who wants to play anyone else but Indy – by making every playable character a lot of fun. 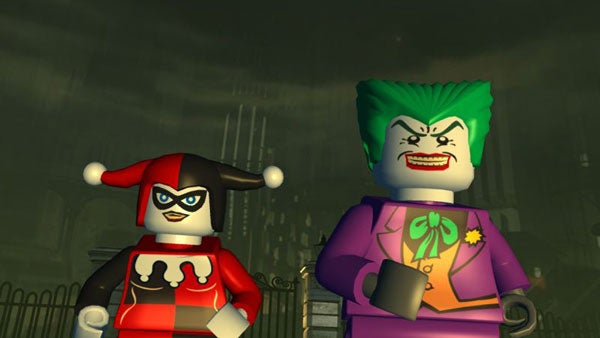 The only reasons I’m being slightly stingey and ‘only’ giving this an 8/10 (though still a warmly recommended one) is that a) we still get the occasional bad camera angle issue and b) I’ve been on the sharp end of several bugs during playthrough, including one where Batman got stuck behind scenery towards the end of a level and one where Catwoman literally disappeared during a climactic battle, forcing me to quit and replay the whole level in both cases. Otherwise, there are a few occasions where single players will get annoyed by the AI – though this really is a game best played with friends or family in any case – and the odd moment where it’s just not quite clear enough where you should go or what you should do next. 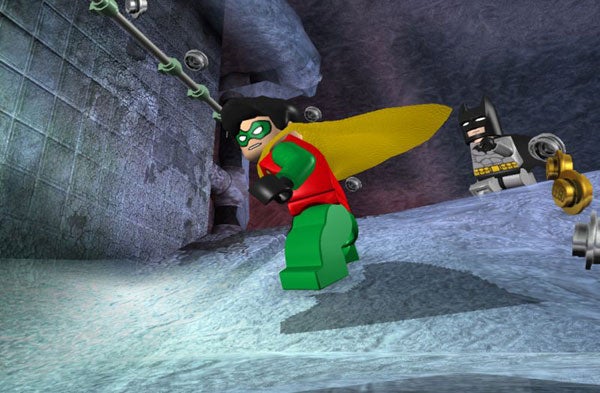 Still, I’m not complaining too much. Lego Batman is another great instalment in the TT Lego series, and a game that practically any gamer of any age group should enjoy. In fact, it’s one of the few games where kids can play with grown ups and you can guarantee that both will have a good time. It will doubtless sell in huge numbers and, frankly, it deserves to.


Possibly the best Traveller’s Tales Lego game yet. The scenes and story might not be as familiar as the Star Wars or Indiana Jones movies, but TT has used the extra freedom to create more satisfying gameplay and a long series of great levels.