Exclusive to Nintendo 3DS
The two games might seem to have nothing in common, but I can’t play Legend of Zelda: Triforce Heroes without being reminded of Destiny. Like Bungie’s brilliant but decisive first-person shooter/RPG, Triforce Heroes takes a game style associated with solo play and refits it for co-op multiplayer.

Like Destiny, it’s a game that demands players work together, understand the game mechanics and become team players, not glory seekers. And also like Destiny, Triforce Heroes has an unfortunate habit of ensuring that some players may never experience it at its best. It’s a wonderful experience in the right conditions, but sadly underwhelming if not.

The basic premise is simple. In a kingdom full of stylish people, ruled by a royal family rich in haute couture, a grumpy witch has cursed the It-girl princess and forced her to dress only in a dour black suit. The people are suffering and the kingdom is losing its fashion flair.

A call goes out for heroes with pointed ears, bold sideburns and the correct way of parting their heroic hair to race out into the drablands, fight evil and break the witch’s curse. You are one such would-be hero, and it won’t be long before you’re in the castle, prepared to travel by Triforce portal and do your bit to save the realm. 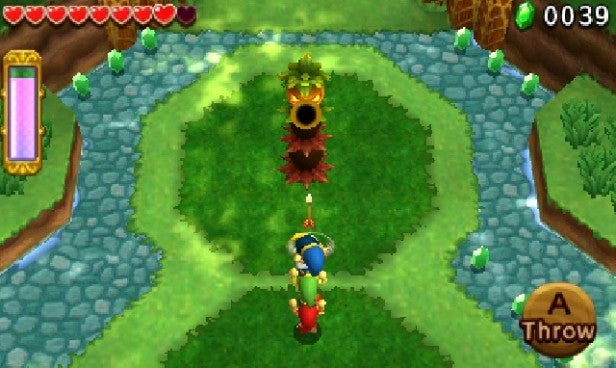 From a lobby area you’re sent out on a four-stage mission, set-out in the 2.5D, top-down style of A Link Between Worlds. You’ll find items to collect and wield in fights and puzzles, defeat numerous foes and brainteasers, then make your way to the stage’s Triforce portal. Reach the level’s final stage and you’ll face a final challenging skirmish or an honest-to-goodness boss battle. Triumph and you’ll win rich rewards.

But here is where Triforce Heroes does things differently. In this Zelda you’re just one elf of a three-elf team, and nearly every encounter and puzzle in the game is based around teamwork. As part of the team you have powers beyond simply swinging your hero’s blade; you can pick up other characters, forming part of a two to three man ‘totem’ stack, and throw them too. This is crucial to reaching high areas or crossing gaps, but also to hitting certain targets with a bomb, fireball or arrow. If you can’t get the height right, you won’t make the shot. 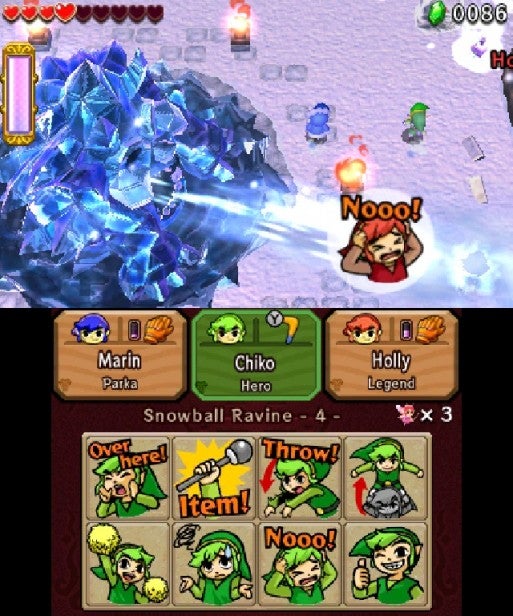 But the puzzles get more ingenious than this. There are sections where one elf can throw the other two up or across, but how do you get him to where his comrades are when there’s nobody to throw or carry him? How can you get all three of you to reach the next portal, or activate the buttons required to open up a gate? How can you reach that tricky to hit monster, or get a bomb in the hole on the boss’s back then give him a beating while he’s down? Teamwork, teamwork, teamwork.

The trick is always to understand the environments and the gadgets, then work out where this teamwork can come in. The game pinches gadgets from a wide range of Zeldas, from old faithfuls like the bow, boomerang and hammer, to less well-known ones like the gust jar. We even get some new spins, like the fireball-throwing fire gloves, the water-spout summoning water rod or the hookshot-like gripshot. The latter can be used to drag you flying towards posts, chainlink fences or even a static comrade, while the boomerang now gets a nifty ability to bring a stranded ally to your side. 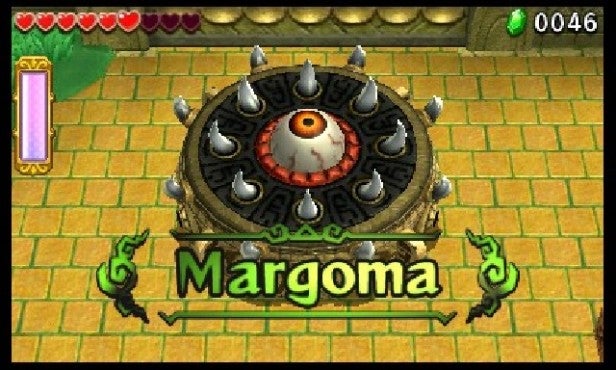 Sure, you’ll miss the storytelling, characters and endless quirky activities of a proper Zelda, but Triforce Heroes is smarter than it first appears. Each expedition takes around ten to twenty minutes to complete, depending on how quickly you can work out the puzzles, and each section is dangerous and devious enough to give you something new to get stuck into.

While your weapons themselves don’t get upgraded, you can purchase new suits from the boutique in town, donning garments that increase the power of certain items or make your life easier in the icy wastes or lava-filled caverns. In the more difficult areas, you’ll need these to make headway. What’s more, once the level is polished off you can return with different challenge modes enabled, giving you different rewards which can be used to craft new and even more powerful costumes. In short, it’s a Zelda with its own loot and upgrade cycle. It’s addictive stuff. 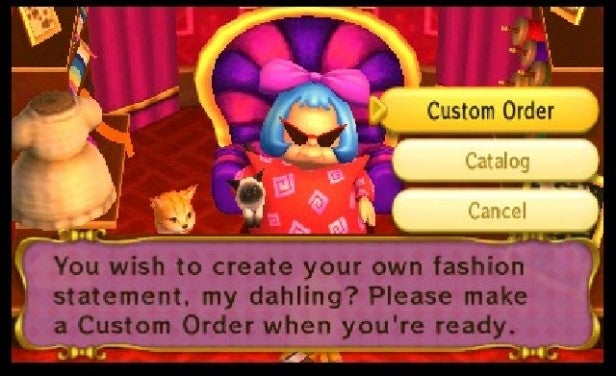 It’s also beautifully presented, with bags of classic Zelda charm. The cartoon visuals are some of the best we’ve seen on the 3DS, with great character design allied to lovely rendering an lighting and levels crammed with lovable little details. The characters in town are whacky, continuing the silly fashion theme, and while the levels themselves don’t stray far from established Zelda archetypes, each has some ingenious twist. Sure, we’ve all played with changing levels in a water temple or tried to break down ice blocks before, but we’ve never done it quite like this – well, unless we played the Gamecube spin-off, Four Swords Adventure.

By now, though, you’ve probably spotted the potential pitfall: the game needs three players to work. In my experience, three player local co-op is the ideal way to play the game. You can shout instructions at each other, cheer when something good happens, scowl when something bad happens and laugh when it all goes wrong. This is easily one of the best co-op experiences on a handheld.  Sadly, not all players will be able to experience it in this way, and it’s no good having just two players, either. Find three or you’re out of luck. 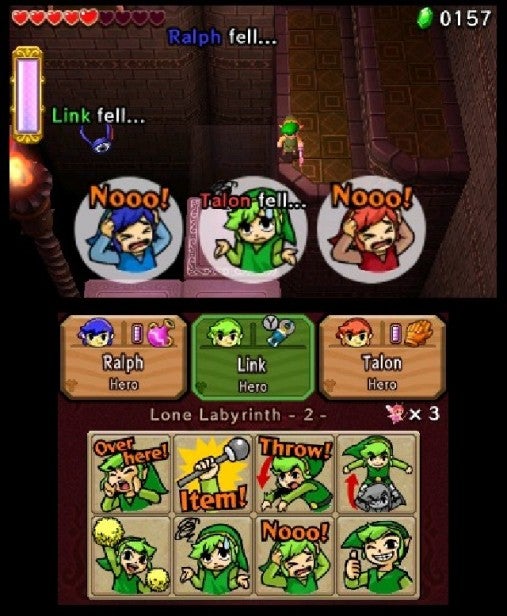 Alternatively, you can play online, either with friends or with strangers. Matchmaking seems seamless and the lobby system just part of the world, with some daft activities to keep you busy while you wait for other players to appear. Nintendo doesn’t allow voice chat, of course, but a simple system of emotes on the bottom touchscreen allows you to grab another player’s attention, request a throw or a stacking-up, point to an item or simply wave, cheer, apologise and commiserate.

When it works, it works brilliantly, but a lot inevitably depends on your fellow players. Sometimes you end up with a dream team, where everyone works together and gets along. Here again, Triforce Heroes reminds me of Destiny – there’s a positive energy about the game that seems to make people more friendly, patient and cooperative than they might be in other games.

Sadly, you may experience the odd sulky player who gets frustrated with their fellows and decides that they’re wasting their time. The solutions to the puzzles aren’t always obvious and sometimes success involves a little trial and error – not helped by the lack of in-game chat. At this point, grumpy players sometimes rage quit, dumping their comrades and sending everyone back to the lobby. Though the game does its best to cover this up with a cheerful message it still leaves a sour taste in your mouth. We’ve yet to meet deliberate griefers, though, and if we did the game has a handy blacklist feature to avoid meeting them again. 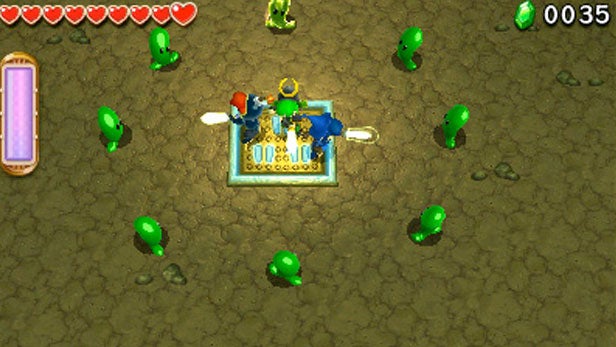 And what of solo players? Well, Nintendo has added a separate lobby where you can team up with two ‘doppels’ – magically animated dolls which you can temporarily infuse with your soul. These aren’t CPU-controlled allies, and you actually need to switch from hero to doppel to doppel in order to get things done. There’s some appeal to this – you really need to think about the order in which you do things, and work out the most logical way to get each elf or doppel where he needs to be – but also a lot of rather slow and repetitive work. The result? Playing Triforce Heroes on your tod is not an awful lot of fun.

Does this matter? Yes and no. Other games which put co-op first usually either have some solo-able content – as is the case with Destiny – and I can’t help feeling that the best way to get yourself kitted out and prepared for online Triforce Heroes is to play through the levels either solo or in local co-op first. It’s also true that we’ve been playing online before the game launches, with few other players to play with and some long waits in the lobby. A full launch should see less waiting and more action, and make it easier to play the game the way it was meant to be played.

Verdict
Triforce Heroes is very likable. It’s hard to say whether the game will hold up to endless repetition without the deep upgrade systems of a Destiny or hack-and-slash RPG, but it’s a fantastic, fun co-op game in short bursts. It also has a multiplayer Colloseum mode where you can battle it out against friends or strangers, with different gadgets to fight with in each compact stage. It still feels, however, a little Zelda-lite, and you really have to ask yourself whether you’ll be able to play the game with mates rather than a random pick-up group. If the answer’s yes, then dive on in. If not, prepare to take the rough with the smooth.