What is the LeEco Pro 3?

LeEco’s arrival in the USA this autumn was less of a “pleased to meet you” and more of a full-on party political broadcast. Rather than edge in with a couple of devices, the Chinese firm went big.

The company revealed a pair of 4K TVs, a 4K set-top box, a VR headset, a “Super Bike” with a built-in touchscreen display, headphones, speakers and a pair of smartphones: the mid-range LeEco Le S3 and the flagship LeEco Pro 3.

The manufacturer is pitching this latter, pretty-looking phone as a flagship device, and many of the listed specs fit that billing – the processor and the battery life, in particular.

However, with a price tag of just $399 (about £315), it sits firmly in the mid-range territory with some sizable compromises to level out the bargain price. While it could be a cheaper alternative to the established names, it’s more likely to compete with the One Plus 3T and the Moto Z for your cash.

Upon removing the LeEco Pro 3 from the box, I was surprised by the quality of the aluminium unibody build. This is a tight, clean-looking, well-finished package that resembles the Huawei Mate 9. This is assisted by the 5.5-inch 1080p edge-to-edge display that keeps the overall size in check.

At 7.5mm, it feels exceptionally thin too. The days of 5.5-inch smartphones feeling like unwieldy hulking beasts are long gone. 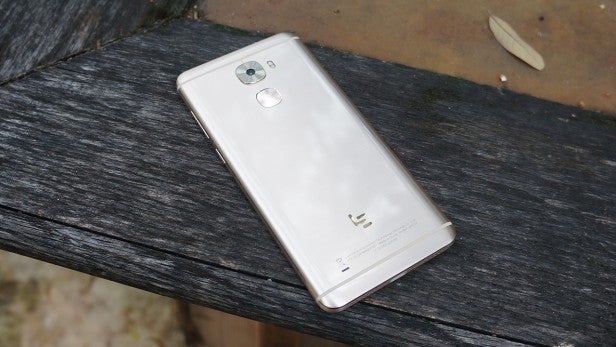 There’s a button-less face with controls handled by capacitive touch. Either side of the earpiece, which doubles up to create stereo audio, is the selfie camera and the light sensor.

The handset is charged via USB Type-C and there’s no 3.5mm headphone jack. It has double speaker grilles, but like the new iPhone 7, one of them is just for show. LeEco bundles USB Type-C headphones with the device and there’s also a tiny adapter if you want to use your old wired buds.

On the rear of the device sits a well-positioned – although very reflective – fingerprint sensor, beneath the camera module and flash. Call us paranoid, but it feels like a print could pretty easily be lifted from that sensor. The lens itself protrudes a couple of millimetres from the casing, but it seems well protected. The battery is non-removable.

On top of the device is a microphone and an IR blaster, perhaps in the hope you’ll go all in with the firm’s offerings and buy a TV or set-top box too. Volume keys and the power switch sit on the right side of the device, while the SIM tray is in the upper-left corner.

Unfortunately, there’s no option to boost the 64GB storage through microSD. However, there is a premium version of the handset that offers 128GB and 6GB of RAM, rather than 4GB on the standard edition. 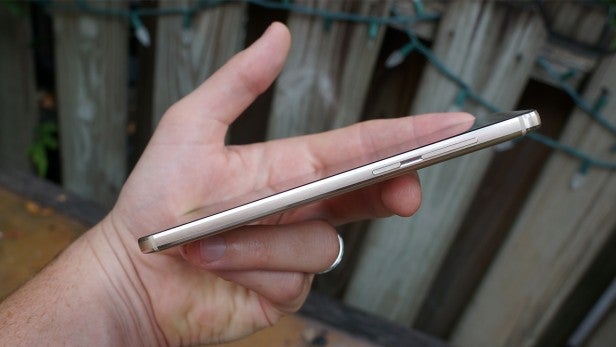 Overall, it’s a solid – if a little unspectacular – design.

As I intimated above, LeEco has done its best to minimise the footprint here. The 5.5-inch display appears smaller on first gaze, especially compared to a behemoth such as the iPhone 7 Plus. The horizontal edge-to-edge nature of the screen makes it easier to reach a thumb across the device. Perhaps LeEco could have shaved a couple of millimetres above and below the display, too.

The inclusion of a 1080p display, as opposed to quad-HD, is one of the areas where LeEco’s flagship claims fall down slightly. Even on the full brightness setting, the display appears a little dull.

Colours are uninspiring. In order to beef it up a little you can access the Vivid mode in settings for greater saturation, but it doesn’t make much difference. 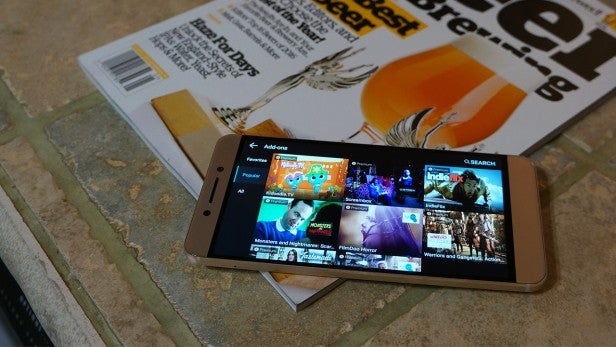 That being said, the viewing angles were sufficient. I experienced no issues viewing the display while it lay flat on the desk, either side of our computer, and while watching video propped up in landscape mode.

On full brightness it was still relatively visible in bright sunlight. I had no complaints over the display’s ability to keep up during fast-paced racing games, either.

The LeEco Pro 3 runs Android 6.0.1 Marshmallow out of the box, although you’d struggle to notice it beneath the highly customised user interface dubbed Ecosystem User Interface (EUI). EUI doesn’t feature a default app launcher, which immediately threw us off. Instead, you’ll see all of the stock apps grouped in folders on two homescreens. A swipe to the right brings up a selection of curated video content from LeView.

The centre icon on the homescreen simply allows you to launch LeEco’s Live streaming services. It’s a little similar to Amazon’s approach to its devices, with the idea to get you engaged with “Le Ecosystem” streaming services that are popular in China. Trouble is, good content through the in-beta EcoPass is a little thin on the ground right now.

In order to access a more traditional Android layout it’s necessary to install the Google Now launcher – or an alternative – from the Play Store. This also replaces LeView with Google Now on the farthest left screen. I imagine this will be the first port of call for most folks.

There are plenty of other quirks within the interface. For example, tapping “Recents”, which sits on the left side of three capacitive buttons, brings up the Quick Settings menu as well as Recent Apps.

Here, there’s also an ever-present Media Controls menu and, quick access to apps such as the camera, calculator, flashlight and full settings menu.

There’s also a camera shortcut on the lockscreen. Speaking of the lockscreen, LeEco could have done a little more to utilise the screen real-estate here. Beneath the clock, there’s room for only three notifications – and often, one of those slots is accounted for by music – and they aren’t really actionable without unlocking the phone. A long press on the notification only offers the opportunity to access the notification settings.

When it comes to notifications, they aren’t really that reliable either. Occasionally, push Gmail notifications just didn’t come through, which was slightly worrying. Another minor niggle? The automatic time-zone setting doesn’t work.

There are plenty of niggly issues that annoyed me about EUI, but nothing that would turn me off the device completely. 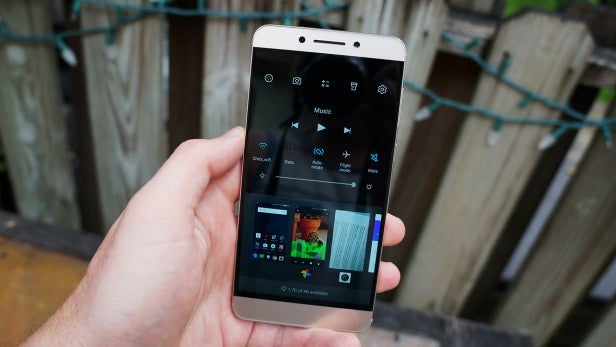 LeEco is hoping you’ll use the phone to access its content ecosystem, which is also being launched inside the US. The “Live” button in the centre of the EUI offers a bizarre nine-screen interface featuring the best videos from the internet. There’s live content from partners such as Variety, Vice, Havoc Sports and the Travel Channel, but you’re also encouraged to subscribe to add-ons such as IndieFlix and Kidoodle TV. None of it really looks worth paying money for right now.

The LeView app, which inexplicably replaces the Google Now screen, basically just features curated YouTube videos; it doesn’t yet merit such a lofty position within any phone’s core interface. LeEco does say the feature is in beta, so I can cut the company a little slack for now.

Anyone who buys the phone will receive a free three-month pass to EcoPass, which offers points-based access to these partner channels, as well as the new DirecTV Now streaming service, cloud backups and a whopping 5TB of cloud storage. The company is also promising a two-year warranty to EcoPass members.

The media experience, although still in development, is aided by the Dolby Atmos stereo speakers, which are implemented well.