Finally the next iteration of nVidia graphics cards is here and TrustedReviews has managed to get hold of one of the first retail cards available. The Leadtek Winfast A360TD is based on the basic Geforce FX5700 GPU, also known as the NV36 and is targeted at the mainstream market as a value for money solution for a wide range of users.


The FX5700 GPU is a completely reworked core and nVidia has developed it together with IBM, with the GPU manufactured by IBM. The GPU is manufactured using 0.13 micron technology which is one of the most advanced manufacturing processes currently available. This would make me assume that it would be a costly product, but amazingly it’s not. The Leadtek Winfast A360TD retails for a very reasonable £126.31, which in contrast to a Leadtek FX5600, from the same supplier, which costs £123.36, makes it very good value for money.


The FX5700 is also much faster than the FX5600 and it runs neck and neck with the FX5600Ultra and the Radeon 9600Pro in most of the benchmarks. This is very impressive and the FX5700Ultra will be even faster, although it will carry a slightly higher price tag.


The A360TD is a basic FX5700 card with DVI-I, D-SUB and S-Video out, but this is somewhat expected considering the price. The core speed is rated at 425MHz while the 128bit memory is rated at 550MHz. This is quite a bit slower than the FX5700Ultra which is rated at 475MHz core with 900MHz memory, but it doesn’t seem to hold back the A360TD too much. The CPU cooler looks quite snazzy as well with its mesh grill covering the fan, but it is a little on the wide side, which means that it takes up the adjacent PCI slot. This is the only real downside of the A360TD but considering how much is integrated on motherboards these days, this shouldn’t be a huge problem. Slightly making up for the two slot solution is the fact that the A360TD doesn’t require external power.


In the box you’ll find an S-Video cable, a DVI to D-SUB adapter and an S-Video to composite converter. There is also a reasonable software bundle which consists of Leadtek’s WinFast DVD, GunMetal and Big Mutha Truckers. You also get a copy of Leadtek’s WinFox overlocking utility that allows you to push the limits of the card. This is pretty much what you would expect to find with any graphics card today, but it is nonetheless not bad at this asking price.


The A360TD did remarkably well in our benchmarks and if you look at the numbers you’ll see that it’s very close to the FX5600Ultra as mentioned earlier. It also manages to beat the Radeon 9600Pro and even the Radeon 9600XT in some of the tests. This is indeed very impressive and in all honesty I didn’t expect the A360TD to perform quite this well. Just don’t expect to be able to play all the latest games with everything on at the highest resolution, for this you’ll need more power and have to spend a lot more money.


After a quick chat with Leadtek, I was informed that the memory speed might be increased on final retail cards, but there is one slight snag. Leadtek won’t have any cards available until the end of November. However, if you can wait for a couple of weeks, the A360TD is an excellent upgrade if you have an older graphics card and want inject new life into your PC.


The Leadtek Winfast A360TD is an excellent card that’s exactly what the FX5600 should have been, with excellent all-round performance and the ability to play the latest games. This is a true mass market card at a price point that will be tough for the competition to beat. 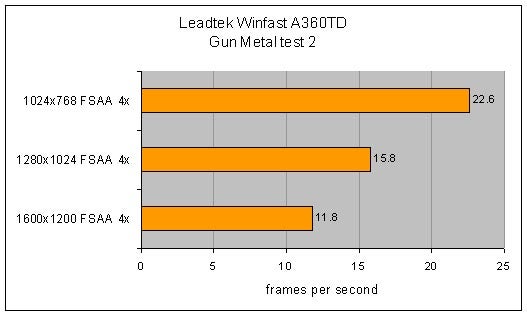