Just a few weeks ago I took a look at the nVidia GeForce 8800 GT and was so impressed by it I gave it an Editor’s Choice award. Its combination of good performance, class leading features, and incredible price made it undeniably the best graphics card we’ve seen since the original 8800 GTX over a year ago. However, for the review I chose to use what’s called a reference board, which basically means it’s one made by nVidia to a standard spec. We receive just the card and run our performance tests on it and assess the underlying technology. However, you can’t actually buy reference boards in the shops so, in order to give you a true impression of what you can expect to get when you lay down your hard earned cash, we’ve grabbed a proper retail board for a TrustedReviews once over. 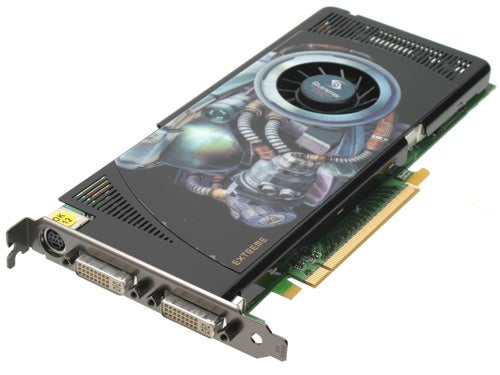 The card we’ve chosen to look at is made by Leadtek and, specifically, it is called the PX8800 GT Extreme. As you may have guessed, the Extreme in the name refers to the fact the card comes overclocked right out of the box so we should expect it to perform slightly better than the reference card we looked at the other day.


Most of the usual board partners seem to have overclocked boards available in the shops and the majority of them are demanding a small premium of about £15, or 14 percent, over the standard clocked boards. In the case of the Leadtek Extreme, it appears to be among the highest overclocked boards available with a core clock speed of 680MHz and memory running at 2000MHz (effective) – standard clocks are 600MHZ and 1,800MHz. Respectively these figures equate to 15 percent and 11 percent increases over the standard speeds and, if our past experience is anything to go by, we can expect the resultant performance to be faster by the same average proportion. With a quick bit of on-the-fly calculation, this means the price/performance ratio of both the standard clocked card and the overclocked card is nearly identical so whichever you buy, you’re still getting great value for money. Therefore, the decision of which to go for comes down to whether you feel that extra little bit of performance is required to run your games as you would like or whether you can get away with just the standard clocked version.


However, I’m getting a bit ahead of myself here. I’ll take a look at performance figures and come to a final decision shortly. First, though, let’s get down to the nitty-gritty of what this card is all about and look at the pretty colours… 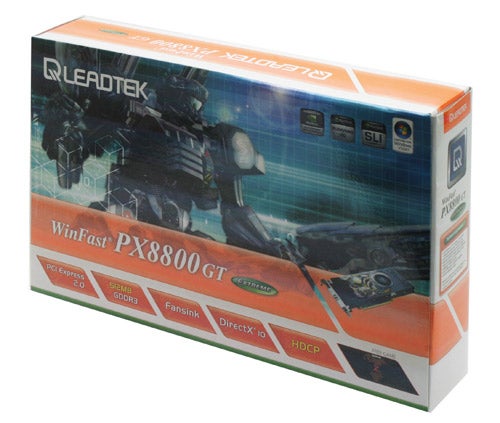 As we’ve come to expect from Leadtek, the box design for the PX8800GT Extreme leaves a fairly considerable chunk to be desired. If the big robotic figure, orange and white colouring, and holographic finish appeal in the Far East, well that’s one thing. However, over here I don’t know anyone that will be attracted by such garish box design. I think judicious use of a brown paper bag might be required when buying one of these – if the card doesn’t fit, at least you can put it over your head.

So, once you’ve thrown the box away, what are you left with inside? Well, obviously there’s the card, which is well protected by a bubblewrap sleeve and foam insert, then there’s a trio of CDs, a multi language quick start guide, a DVI-to-VGA converter, an analogue video-out dongle, and finally a Molex-to-PCIe power connector. This is a fairly standard bundle for an 8800 GT but it’s worth noting that ATI is now bundling DVI-to-HDMI converters with its more expensive cards, which would be useful for anyone wanting to connect their computer to an HDTV.


One of the CDs contains the game Neverwinter Nights 2 which, although well received by Stuart, is over a year old now so I wouldn’t consider this to be adding much to the overall bundle. A number of other companies are offering much more recent games with their cards – for instance, Asus is including Company of Heroes: Opposing Fronts – so if getting a free game is high on your list of reasons to choose a particular card, then you may want to look elsewhere. On the other two discs you get the drivers for the card and a copy of PowerDVD and Orb media streaming software. 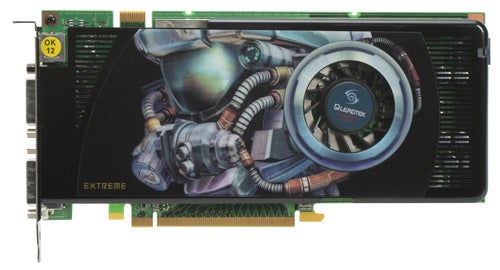 The card itself is identical to the nVidia reference one except for the addition of a rather funky sticker that covers the heatsink. Considering the nVidia reference design looked so good Leadtek has done a reasonable job of distinguishing itself without totally destroying the aesthetics of the card, as they have done with the box design.


As the mechanics of the card have remained unchanged from the one we looked at a couple of weeks ago, it comes as no surprise the PX8800GT maintains its single slot design and the cooler is still whisper quiet. An SLI connector can be found in its usual position along the top edge and, because of the cool, slim, and quiet nature of the card, making use of said connector may finally be a realistic and worthwhile proposition. Only one six-pin PCIe power connector is required to get the card going at full pelt and the connector is conveniently situated on the back edge of the card where it’s least likely to cause problems when fitting the card into a case. 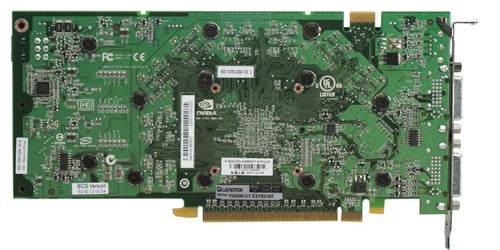 Overall this package is fine, and considering the very competitive price, its shortcomings are more than made up for by the shear value for money the card provides. So, without further ado, let’s take a look at how the PX8800GT Extreme performs.


In the initial review of the 8800 GT we introduced Team Fortress 2 into our suite of test games and dropped Counter-Strike: Source. However, after an update to the Steam service our TF2 timedemo doesn’t work anymore so we’ve had to revert back to CS:S for the time being. However, we have introduced Enemy Territory: Quake Wars and the full version of Crysis and soon we will be adding Unreal Tournament III and Call of Duty 4 into the mix as well.


Each game is run using custom automated timedemos that take part in some of the most intense sections of each game. Each one is run three times to ensure we have a consistent result and the three are averaged to give us an exact figure. We then vary resolution, antialiasing, and filtering to show how the cards cope at a variety of settings.


As can clearly be seen, the overclocking performed on the PX8800GT Extreme has given it a nice speed bump and, apart from Counter-Strike: Source where the CPU is holding both graphics cards back, the benefits are quite tangible. Considering the small increase in price over standard clocked cards, this makes the Leadtek PX8800GT Extreme a worthwhile investment. So, as I said earlier, it does just come down to whether you feel that extra bit of performance is needed, because in terms of value for money the PX8800GT Extreme is equal to its standard clocked equivalent.


Overclocking our favourite graphics card was always going to result in an even more desirable product and indeed that’s what we have with the Leadtek PX8800GT Extreme. However, what really seals the deal is that the performance boost doesn’t demand a huge price premium, making this card a true bargain.