There have always been TV tuner cards for PCs but it’s fair to say that Microsoft’s Windows Media Center operating system has given them a new lease of life, so much so that if a card isn’t MCE compatible, it’s hardly worth mentioning.


Leadtek’s DTV1000 T digital tuner card is certainly MCE 2005 compatible but ironically there’s actually good reason not to use it with MCE, as the supplied software provides access to a bunch of tricks that aren’t available under Microsoft’s OS, but more on those later.


While this Leadtek card has only just been released, it’s actually been around for some time as the OEM LR-6650 card though Leadtek’s version comes with its own software and a remote control. 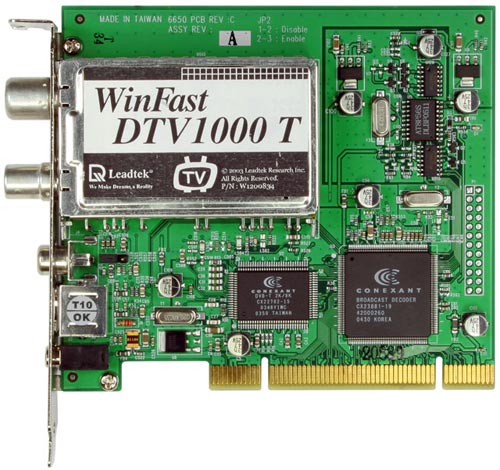 The card is powered by two Conexant chips, a demodulator and a decoder. Connectivity is good. First of all there’s an antenna in for picking up digital terrestrial TV, which in the UK is Freeview. Beneath this is an antenna out. This unusual addition is for looping to a second card. In this configuration the card can process four channels simulateously – four channels actively previewing. MCE 2005 supports dual-tuner cards, enabling you to record one channel while watching another.


Below this is a composite connector, which should really be avoided due to the very poor image quality it delivers and lastly there’s an S-Video input. These can be used for capturing from analogue sources such as camcorders or from set-top boxes. At the very button is a connector for the supplied remote control dongle.


To test, I installed the card in my home Media Center 2005 system – an old shuttle box with a modest 2.2GHz Celeron and 512MB of 333MHz RAM. I only use it for video as the analogue TV tuner only picks up four of the five terrestrial channels and does so pretty poorly. Replacing the analogue cards with the DVB-T capable Leadtek paid immediate dividends and MCE 2005 was able to pick up a host of channels straight away with a great picture. MCE 2005 downloaded the EPG over the Internet and I was away, setting up the machine to record the whole series of Desperate Housewives.

I was immediately impressed by the image quality, though that’s not saying much compared to what I had before. There was some ghosting on fast motion but the main limitation is the relatively low bit-rate used by Freeview. One of the options is something called Eagle Vision. This can’t be selected when Hardware Assist is enabled but as it adds some noticeable sharpness and vividness to the picture I left it on.


The Leadtek comes with its own software and I was keen to see what it could do. After installing it and trying to launch the software I ran into problems, getting the error message, “Failed to Connect to Decoders”. I guessed this was due to a conflict with Media Center so I uninstalled everything and started again. This time all was well. I have to say that I was pleasantly surprised by the Leadtek software. It’s not the last word in UI design by a long way, but I’ve seen far, far worse. There are three skins to choose from though all are a touch quirky. Most impressive though was the fact that it actually works and the experience was only blighted by one major crash. Leadtek has already updated the software since it first came out, adding UK EPG support, so hopefully further stability improvements and feature enhancements are on the horizon.

One thing that ought to be added is a setup wizard. When the software first launches you’re presented with an empty screen and you have to hunt around to find the configuration options, represented by a spanner. Inside, you select your local region and the card goes off and scans for channels. It did so quickly and listed each one with the channel logo so it’s easy to recognise. On the left hand side of the screen there are various tabs for different options. In the capture settings you can select between, ‘Programme Stream’ which will record the programme you’re tuned in to in MPEG 2 format, or it will record the raw programme stream. This will enable you to record all the programs being received at the same time. However, to view the different channels they have to be separated first, a process known as demuxing and you’ll have to get third part software to do this. This is a complicated process and one for adventurous users only.


When it comes to recording a programme in the normal way there’s an on screen EPG, a feature that really sets the product apart from any analogue tuner. Right click on a programme and a dialogue box appears enabling you to record or set it up for a series or weekly recording.


Hold the mouse over the virtual LCD screen on the software and a list of channels pops up. Unfortunately, this appeared in a random order mixing up TV stations and radio stations. The fact that is automatically pops up is a little irritating, as you have to be careful where you move your mouse. 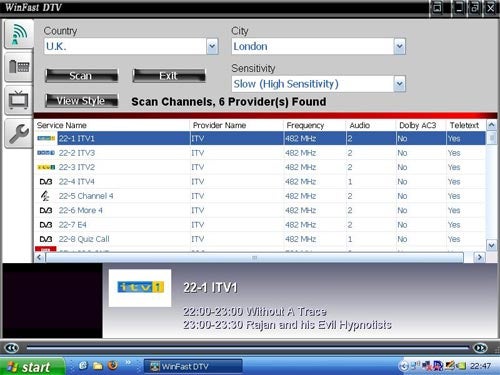 The software is also capable of some neat tricks. There’s a Picture and Picture (PAP) setting, which enables you to watch two channels at the same time with audio from both. A bar across the screen represents the audio and you slide it one way or the other to raise or lower volume. You also have a Picture In Picture (PIP) setting where you have one channel appear in a small box and a Picture On Picture mode, which enables you to change the channel of the smaller image via arrow at the top. Double click on the channel and it will swap places with the larger one. The best trick though is the Channel surf option, which enables you to bring up a thumbnail view of each channel, with the amount that will fit on your screen only limited by the resolution of your display. The channel the mouse sits over is active while the others display the last frame.


The software will, of course, enable you to pause TV, but to do this you have to first press the time shif key. I would make this a default so that pausing is always available. Once paused you can forward and rewind at your leisure and it worked reliably for me.

These functions are most easily accessible from the remote. The remote is not the most appealing of objects, being bulky and made of cheap white plastic with spongy buttons. The most amusing button is ‘Boss Mode’ which will immediately make the picture and audio disappear only to pop back when you press the button again. You can also use the remote to shut down your PC or launch the TV application.


The specs list HDTV and AC3 compatibilty but it’s a moot point in the UK as it will be many years before this is available over an aerial. Pleasinlgy, also included in the box are copies of Ulead Videostudio 9 SE, Ulead DVD MovieFactory 4 SE and Ulead Cool 3D SE for video editing and VCD/DVD/SVCD authoring. 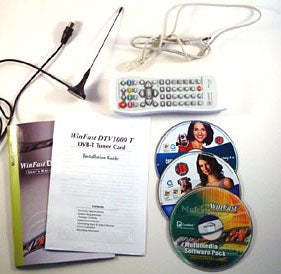 Overall, this is a good product that really does do what it should. The fact that it can be run with another card to enables dual recording or recording while watching another channel is a real plus. However, cards that feature dual digital tuners on a single board are starting to appear so this might have limited appeal save for price. Indeed we’ll have a review of a dual DVB tuner on the site soon.


A solid product that offers good quality digital TV pictures with dual card compatibility for MCE 2005 and when used with the supplied software, serves up a number of viewing tricks.