It’s a bold new era for Level-5’s puzzle-solving detective series, and in more ways than one. First, it’s the first ‘proper’ Layton game with a new protagonist. The Professor is gone and we’ve moved two decades into the future to focus on his grown-up daughter, Katrielle. Second, it’s not a 3DS exclusive, but a mobile game launching first on iOS and Android, then coming to Nintendo’s platform in October.

Worried? Don’t be. Katrielle is a chip off the old block and the Layton magic hasn’t disappeared. This still looks and feels like the Layton games we know and love, and Level-5 has handled the move to mobile almost flawlessly. My only beef with Katrielle’s first adventure is it feels a little too much like the first entry in a series, and that – in some respects – it’s also a step backwards. We’ve learnt to expect a lot from the Layton name, and this first Mystery Journey falls slightly short of the series’ highlights. 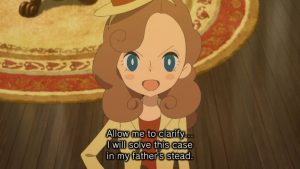 It still works like previous Layton games. In each of Katrielle’s investigations a map links different locations, all presented as beautifully hand-drawn scenes populated by stylised cartoon characters. You guide a magnifying glass around looking for clues, tapping areas to reveal hint coins, interact or examine something, while tapping a character engages them in conversation. You might find out something silly, or discover a fact pertinent to your case, but often the immediate result will be a puzzle.

Layton games aren’t about the kind of use-object, combine-object puzzles you’d find in an old graphic adventure, but about the more straightforward brainteasers you might associate with an IQ test or a puzzle magazine. You might have to work out someone’s age from their relationships with different members of their family, or figure out how to swap cows for aliens, one-by-one, in a specific way. You might have to sort honest ghosts from lying phantoms or find the right order in which to shoot a bunch of bubbles, all through logic (or occasionally dumb luck). The conundrums start easy and get progressively more tricky, though the game throws in the odd curveball.

All of this is tied into a series of cases, where Katrielle runs and cycles the length of breadth of an idiosyncratic fantasy London, looking into mysterious deaths, stolen film, haunted mansions and missing pets. As she explores, chats and solves, she puts the pieces of each mystery together until, finally, she’s ready to expose the truth. In some cases this might be so bizarre that you have no chance of working it out beforehand, but it doesn’t matter: the denouement always comes through copious conversations and video clips. Sorry, would be Morses and Poirots – Katrielle does all the real detective work for you.

But then the Layton genius is never just in the puzzles – great as they are – or the style, which is as charming as ever. In fact, with an HD smartphone screen to play on, Level 5’s anime visuals have never looked better. 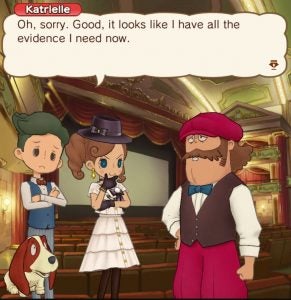 Instead, a lot of the appeal comes down to personality, and the peculiar, oddball nature of the series’ characters and situations. On this point Katrielle’s adventures don’t disappoint. From crazed patissiers to rude rich ladies, lunatic film-makers, bonkers officials and nutty fishermen, this game has a classic Layton cast, while the stories and the general behaviour only get weirder with time. Meanwhile, Level 5 spends time assembling a new cast of regulars, including a talking dog with mysterious origins, a rival sleuth obsessed with scientific methods and a lovelorn assistant, Ernest, who moons pitifully over Katrielle’s every word and glance.

Sadly, this is where the grumbling and moaning begins. When I say ‘spends time’, I mean a lot of time, and this is a massively dialogue-heavy game with scores of lines to chew your way through before you get to each and every puzzle. The script is funny enough not to make this too much of a chore, but would it really hurt to cut down the preamble? The characters, the relationships and the quips are a huge part of the pleasure, but sometimes they feel like a lot of padding between the puzzles.

Perhaps more seriously, this Mystery Journey doesn’t feel so clear about its route or destination as previous Layton adventures. Partly, that comes down to a more freeform structure, where after the first clutch of investigations you get a series of cases you can tackle in any order, even switching between them midway through. It’s a fun way to play and perfect for dipping in and out of while on the move, helped by handy recaps when you return to a case.  But it also has another effect: you lose the urgency and drive of the previous Layton games.

You see, the earliest Layton games worked as strange and absorbing mystery explorations, where the need to find out what the hell was going on pulled you through from start to end. As the games went on they developed a richer background lore, while Level 5 became masters at manipulating the pace and flow of the gameplay. The studio pushed the adventure aspects and gave the last games – particularly The Azran Legacy – a surprisingly epic feel. It wasn’t just interesting, engaging and mind-boggling, but genuinely exciting. 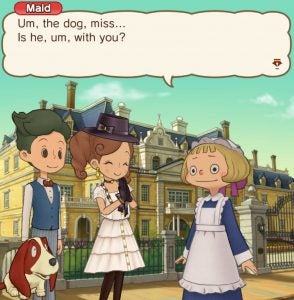 With Katrielle’s debut, a lot of that has gone out of the window. The cases are fun, but don’t really cohere into anything more dramatic; in fact, a lot of time goes by before there’s even the slightest sense of an over-arching plot. This doesn’t make the puzzles or the stuff between them any less enjoyable, but it does lessen the impact of the game.

There’s compensation in a range of side activities, where you can help your talkative hound, Sherl, escape a series of tricky puzzle dog pounds, organise a store to flog objects to browsing shoppers or create the perfect meal for members of the cast. You can also kit Katrielle out with costumes from her expanding wardrobe – rather sneakily, you can buy these quickly with real cash as optional DLC –or redecorate the office to your tastes. Some will moan about microtransactions in a game that already costs £15.99, while I’m sure quite a few of us aren’t bothered either way.

This is a good start to a new generation of Layton mysteries, but maybe not a great one. While the characters and dialogue are charming, there’s an awful lot to wade through, and it would be nice to see the puzzles more upfront. What’s more, this feels like an introduction, without the more epic globe-trotting, enigma-solving spirit of adventure of the last few Layton games.

There’s enough here to please newcomers and fans shouldn’t feel too disappointed, but the Prof left some big shoes to fill. His daughter has the guts and smarts to fill them, but she really needs a better chance to shine.