If there’s one thing that distinguishes mobile games from their cousins on console, it’s the need to get the player on board in quick time. If they’re not impressed with what’s on offer within the first minute – maybe even the first few seconds – then they’re gone for good, and the chances are the game will have been deleted mere seconds later.

Whereas a player may be willing to give a game they’ve forked out £40 for a fair few hours to prove its worth, the relatively low cost of most mobile games means there’s no harm in deleting a title in a quicker time than it took to download. The problem for Last Horizon is, if you measure the game by its opening moments, it fails abysmally. Those who manage to stick with it, however, will discover its take on life out in the vast expanses of the universe actually has much to offer.

Left alone on a barren planet now no longer capable of sustaining life, it’s your job to take off in your rocket to find a new home, sapping resources from the other rocks you pass along the way to ensure you have the tools to terraform whatever world you end up inhabiting. Split into four different adventures, little changes from one encounter to the next except the difficulty, and with only limited fuel and oxygen on board until you land your craft, Last Horizon is a real tale of survival against the odds. 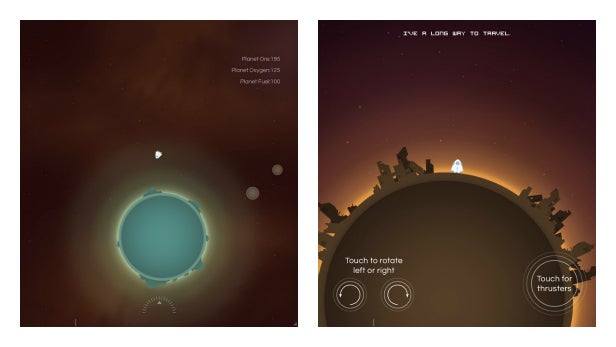 Success therefore is a balance between deciding what planets to land on in order to stock up on supplies and, in some cases, meet the locals, and your ability to fly the craft. With only your rocket’s thrusters and an ability to turn at your disposal, this is undoubtedly the trickiest part of Last Horizon, with the idea being to keep a steady pace and use the gravity of the planet your aiming for to ground you. Land with too much pace or at the wrong angle, and you’ll either cause significant damage or destroy your ship completely. The line between triumph and tragedy is an especially fine one in Last Horizon.

This, sadly, is exactly where things go a little wrong. Rather than teaching you how to fly with some sort of mini tutorial, instead Last Horizon attempts to convey the finer points of play via a series of over-indulgent and frankly confusing slides that do nothing to sell the concept, or soften the blow when the first collision results in a permadeath. All this is a shame because, when you get into the meat of play, Last Horizon has many deeper layers beyond the dexterity of flying and landing successfully, namely to do with resource management. Aside from deciding which planets are worthy of your time, knowing how much to strip from its core – the goodies saps up simply by landing on the planet’s surface – before you kill it entirely becomes something of an art. 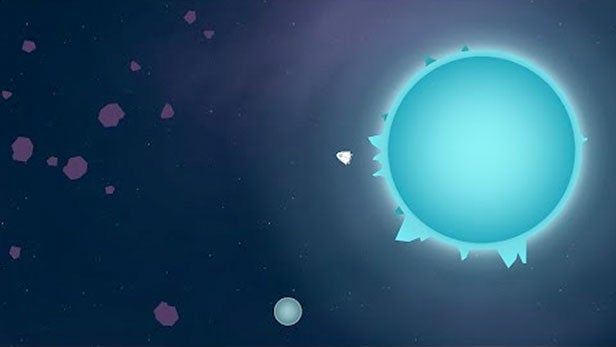 The problem is, all this has been buried way too deep, with developer Pixeljam wrongly assuming that everybody’s on board from the word go. As a result, there’s a good chance that a large chunk of those who download Last Horizon will never make it past the game’s first encounter, struggling with the intentionally unforgiving controls and, without any real guidance or hint at what’s to come later down the line, giving up entirely. It almost feels like a case of tunnel vision, with Pixeljam so wrapped up in delivering its own vision that it forgot how it feels to take on Last Horizon from afresh.

The end result is a frustrating mix of undeniable promise but an equally evident lack of finesse when it comes to the game’s delivery that ultimately lets the whole package down. It’s also fair to say that, for those who do master Last Horizon’s controls, the lack of content beyond the four stages available is also something of an issue. As ever, the live nature of every mobile release means an update or two could see the game’s promise finally realised, but putting a game out that, with a bit of QA would be much improved puts a big black mark against Last Horizon and ultimately means this is one space adventure with an orbit that’s a little out of kink.

Verdict
Intentionally difficult, a lack of subtlety when it come to conveying the game’s complexities means that, though Last Horizon has much promise and charm, it’s ultimately too frustrating an experience to really deliver. An update or two to streamline the gameplay, however, may yet save it from complete obliteration.