Available on iOS and Android
You might not associate Square Enix with mobile games, but there’s one smaller development studio within it that you should pay attention to. And that’s Square Enix Montreal.

It’s the studio that brought you Hitman Go. The mobile game that managed to turn Hitman into a boardgame-inspired puzzler with Agent 47 as its version of the iconic Monopoly iron.

Well, this time, Square Enix Montreal is putting its own spin on Tomb Raider – another of Square Enix’s big name games.

And like Hitman Go, Lara Croft Go manages to exemplify the mobile medium and all its idiosyncrasies.

Lara Croft Go’s simplistic yet breathtaking art style is the most immediate way to praise it. Split into several chapters, with each maze given its own distinct feel and colour scheme. Like Hitman Go, this opts for a fairly simplistic colour palette, but it’s still absolutely stunning.

That’s partly down to Square Enix Montreal’s decision to present Lara Croft Go in a 2D isometric style. But it’s a little more grand than that, with a layered foreground and 3D elements that keep the environments feeling alive.  Even when you’re scratching your head for a solution.

After all, Lara Croft Go is a puzzle game after all. Lara, as she is wont to do, is exploring a temple in search of a rare artefact, but she’s going to come across a number of hurdles along the way. 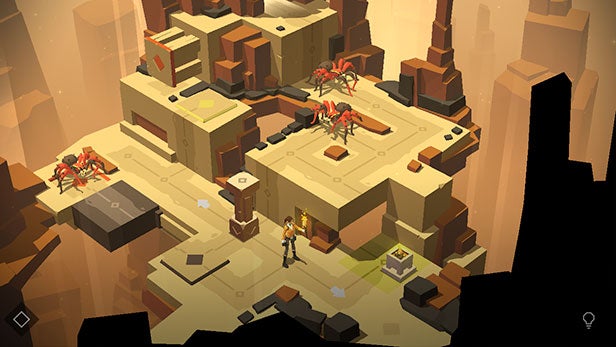 Although the puzzles can be complex, the controls of Lara Croft Go are wonderfully simple – a true example of how to execute a mobile game properly.

As with Hitman Go, there are various paths laid out on the floor that Lara can move along. You swipe the screen in the direction you want Lara to walk, climb or leap and tap to have her interact with objects such as switches or levers.

What’s great about Lara Croft Go is that it’s a mobile game that hasn’t forgotten its routes. This has the distinct feel of a Tomb Raider game, right from the title screen down to the individual elements of each level. Before you even start the game you’re presented with a circle of icons as the menu screen. There’s even diaries for level selection as a nod to the save options of the original Tomb Raider games on PC. 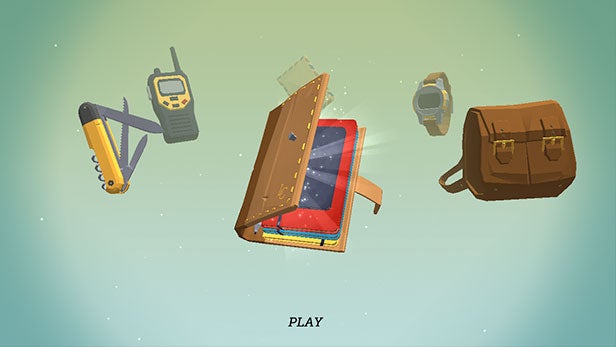 I won’t spoil all the ways that Lara Croft Go acknowledges its Tomb Raider brethren. But, it’s safe to say that this is a game made by people who know and love the franchise.

But it’s also not like any other Tomb Raider game. Lara Croft Go is a turn-based game that offers you an often multi-layered puzzle with each of a maze’s rooms. To begin with, the puzzles are straightforward. Lara might only have to work out which way around the path she must go to reach the exit at first. Then perhaps attempt to avoid a weak floor that she can only pass over once before falling to her death.

As the game goes on though, and you get deeper into the game’s story and the temple itself, the puzzles will get more and more complicated. 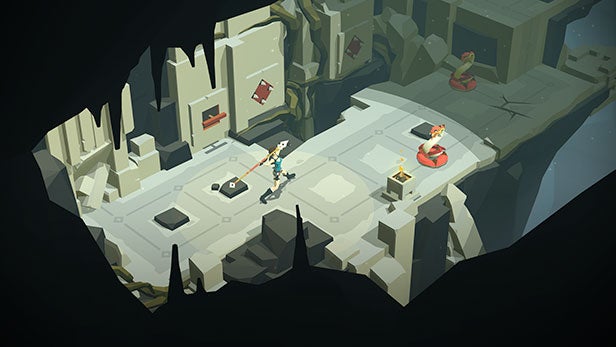 You might have to work your way through a pit of snakes – realising that you can only shoot them from behind or the side. Or work out how to utilise a set of moveable columns to depress floor tiles that trigger rising platforms to carry Lara to the next level.

You’ll start with Lara’s traditional dual-wielded pistols of course, but you’ll also have a few other weapons to play with as the levels progress. That includes a torch to force enemies away from you and a spear to throw at them from a safe distance.

And as everything is turn-based, including the enemies’ movements, there’s usually only one solution to each level. That can make things a lot more complicated but there’s a steady learning curve along the way. We will add that this is a game that lacks any kind of tutorial too, making puzzle solving that bit more satisfying. You’ll always feel like the solution is within your grasp, it’s just a case of trial and error.

There’s often nothing better than being stumped on a level of Lara Croft Go and finally working out what you’ve been doing wrong. 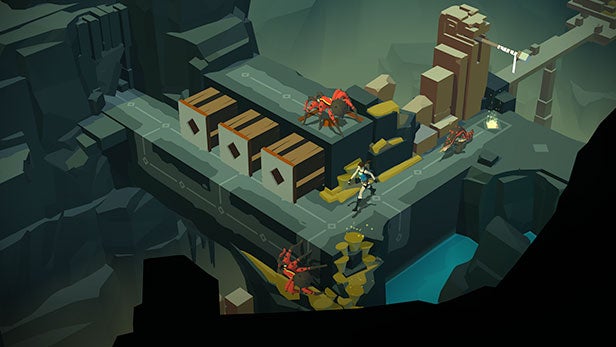 Square Enix Montreal has also added an element of replayability too, thanks to the addition of collectibles. These take the form of glowing brown urns that are scattered around each level. There are often as many as five to find in each, and trust me, they are very well-hidden in the later levels. And if you’re as OCD about getting that 100 per cent on each level as I am, those pesky urns will drive you to insanity.

Of course, there’s more to the collectibles that simply getting the 100 per cent though. If you collect the full amount of gems and/or all the pieces of an artefact you’ll get a new outfit for Lara. And, you’ve guessed it, they all hark back to classic outfits from the original Tomb Raider games.

If you liked Hitman Go there’s nothing to fault here and it’s a must play. Not tried a Go title before? It’s about time you did.