Available on PS4 (reviewed), Xbox One, PC
The Lara Croft games and the mainstream Tomb Raider games now seem to exist in different dimensions, the core series taking Lara further in the grittier, darker direction of the 2013 reboot, the Lara Croft offshoot harking back to the early games and the first Crystal Dynamics titles. Like 2010’s Lara Croft and the Guardian of Light, this is an action-oriented, puzzle/platform/adventure game, which looks and feels like a collision between a twin-stick shooter, a Diablo clone and Tomb Raider: Anniversary. In contrast to the 2013 Tomb Raider, it’s a lightweight, breezy affair, which plays with the comic-book conventions of the older Tomb Raiders rather than trying to reinvent them or give the Lara character depth. 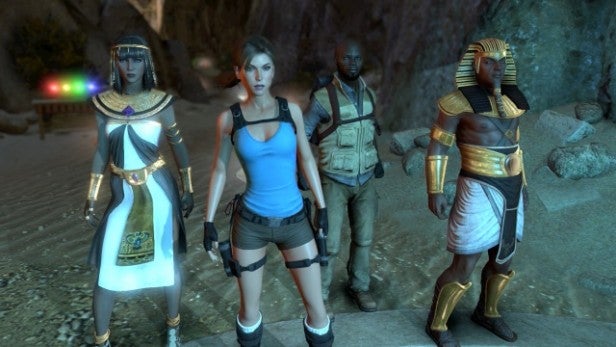 This time the action takes place (you guessed it) at the Temple of Osiris, where Lara and rival raider, Carter Wells, mistakenly awake the Egyptian God of Darkness, Set, and have to run around collecting the myriad body parts of Osiris, so that he can reincarnate and, well, do something or other to stop Set. Working solo or aided by Carter and/or the deities Horus and Isis, Lara must run around the titular temple complex, battling Set’s various minions, solving vintage switch and rolling ball puzzles, and leaping, grappling and rolling her way around the place.

The plot isn’t particularly deep or interesting, and it’s delivered through static panels and in-engine cut-scenes with the kind of manic, over-the-top performances that you’d normally only find this time of year at your local panto. Keeley Hawes returns to voice Lara in her classic blue vest and tiny shorts costume, and seems to take all the ridiculous Egyptian fantasy in her stride. Gods? Skeletons? Giant crocodile warriors and scarab beetles? It’s all in a day’s work for this game’s version of Miss Croft. 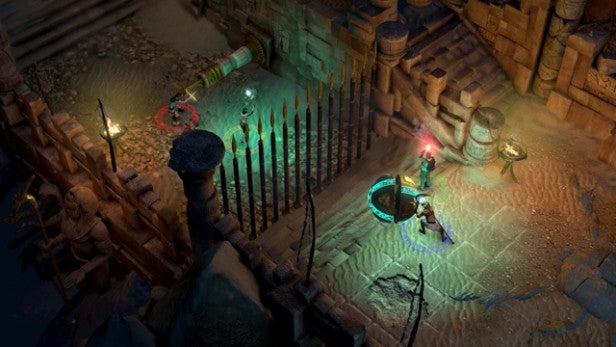 Generally speaking, the action works well. You move with the left stick, aim with the right and fire with the R2 trigger. You have a magic staff that can raise and lower blocks, with a handy built-in laser-beam, and you can also set light to beacons and gas vents with a torch, or grapple onto handy hooks. There’s a nice balance between fighting off hordes of evil minions, exploring and solving puzzles, and the puzzles themselves are quite ingenious, combining switches, water-flows, chains of gas vents and large rolling time-bombs in all kinds of interesting ways.

The level design and pacing is generally better than in Guardian of Light. This is a game that knows how to mix up combat, frantic chases, thoughtful puzzle sequences and narrow escapes, and some of the scenes are genuinely spectacular, pulling back from Lara and companions for an extra sense of scale. There are fewer infuriating boss battles, and extra depth is added by some light RPG elements. Not only can Lara collect a range of weapons, but she can also mix and match different rings and amulets, conferring bonuses on both her and her party, and giving you a better chance of getting through the game. 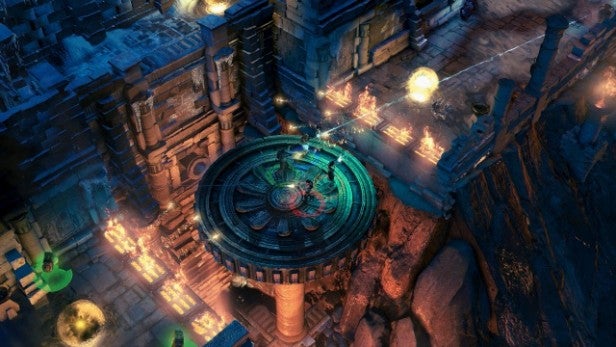 The visuals also show more flair, and while Temple of Osiris doesn’t have the stunning scenery or detail of Tomb Raider: Definitive Edition, it finds ways to use the power of the next-gen consoles in dynamic lighting effects, water effects and large-scale destruction. Throw in a stirring score, and it doesn’t feel like a budget-priced download game.

Like Guardian of Light, it’s playable either solo or as a co-op experience, and you can have up to four players on the same console or playing online. The former works best, just because it’s easier to discuss tactics or possible puzzle solutions, and the fun factor notches up considerably. Online you’re still stuck with a single view that zooms in and out to keep all the players visible, and it can be hideously confusing. There are multiplayer solutions to many puzzles, but organising them can be tricky, and in one cases I got stick in an awkward position while my fellow heroes tried their best to march ahead. And while the alternative heroes all come with their own skillsets, it’s not easy to adjust if you’re used to playing as Lara. Co-op Temple of Osiris can be a blast, but even with an effective matchmaking system, online isn’t the best way to enjoy it. 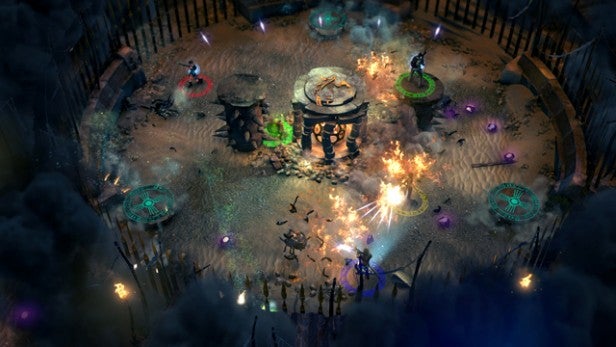 The strength of this version of Tomb Raider is that it doesn’t take itself so seriously, and that it leaves you to get on with what people used to love about the series: its sense of adventure, its cod-mysticism and glamour, its grasp of fun. The weakness is that it’s a wafer-thin endeavour, and that you’ve pretty much seen it all and played it all before. And while there’s plenty of replay value in a huge range of collectibles and challenges, not to mention the addictive local co-op play, it’s not a huge game. You could easily work your way through it in an evening or two.

Given that we can’t go ga-ga about Lara’s latest, but we will recommend it. It’s a slick and entertaining outing that’s both very likeable and richly entertaining. We’re a little more excited about next year’s Rise of the Tomb Raider, but this is more than good enough to keep us going in the meantime.

Verdict
A lightweight but lovable adventure in the spirit of the classic Tomb Raider games. It’s not particularly deep or innovative, but it balances combat, puzzle-solving and exploration well, and the third-person visuals and level design work better here than they did in Guardian of Light. Do you still like Lara? You’ll like this.