Since the Oculus Rift and HTC Vive launched, I’ve been wishing for two things: VR Skyrim and a stomping mecha game in the same style as Capcom’s killer Steel Battalion series. Although I’m yet to have the opportunity to slay dragons in virtual reality, it looks like my second wish is about to come true with the arrival of Landfall, sort of.

Landfall’s is a mecha-themed VR shooter from Force Field studios that offers both strategic and competitive multiplayer elements. On first hearing the pitch, flashes of Titanfall mixed with Carrier Commander flooded into my head. I imagined a game where you jump in and out of giant robots while issuing orders to surrounding troops using the Oculus Touch. But after a few games, realised it offers a slightly different experience.

Watch: Best games of the year

Despite being at the cutting edge of tech with VR, Landfall’s gameplay feels distinctly retro. Matches follow a basic capture and control dynamic that’s been standard for almost every shooter since Quake III Arena. Specifically, multiplayer adopts a 2 vs 2 format, where one team is tasked with capturing and controlling a set number of points, or destroying key targets, while the other team defends.

The tutorial didn’t sell the game all too well. Although you can look around the map from a fixed point, for the most part the headset felt superfluous. The graphics look great, but the top-down view made me feel like I was looking at a virtual Games Workshop miniatures board, not a futuristic battlefield. 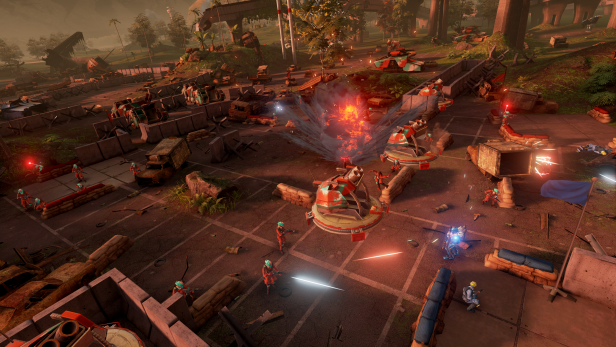 The fact that the majority of the game, from what I’ve seen, is played using a basic Xbox controller didn’t help matters either. The top-down view screams RTS hybrid, and throughout the demo I found myself longing to use the Oculus Touch to issue commands to surround AI-controlled troops. Instead, I simply had to run from capture point to capture point, hold position and shoot a few enemies to ensure victory.

The ability to guide airstrikes using the Oculus Rift headset, call in a mech suit, and activate a special shield ability added some variety, but I had concerns that victory was guaranteed simply by holding down the fire button and strafing. However, these worries soon evaporated once I stepped into multiplayer. 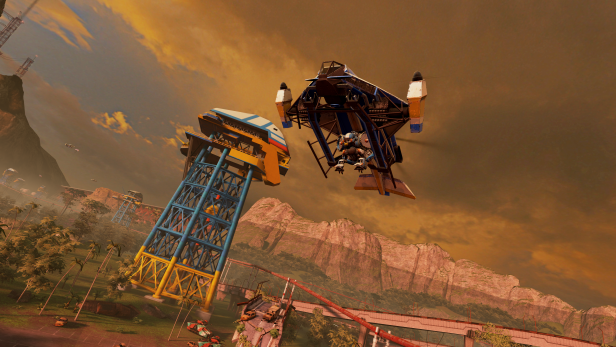 Playing a competitive match I discovered all manner of subtleties in Landfall’s gameplay. Taking the role of defender, my comrade and I were tasked with repelling the enemy-invading forces in three separate rounds. The difficulty increases with each round.

The first round was intense; it became woefully apparent that just running to the nearest control point and shooting willy nilly wouldn’t do the job. I also arrogantly assumed that having better hardware at my disposal would be enough to assure victory. I went rushing to the nearest supply drop the moment it landed, leaving my teammate on his lonesome against the advancing hordes. The enemies quickly dispatched him and occupied the first control point.

Our enemy worked together to manage their abilities by alternating use of their shields and specials, allowing them to become entrenched on the point. Once settled, and despite calling down my mech, the invaders were able to capture the first point while taking close to zero damage. 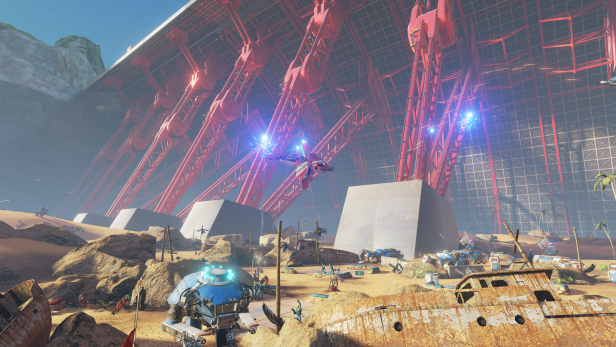 Retreating and regrouping, I finally began to understand the ebb and flow of battle and the importance of timing attacks, and working with my allies – both AI and human. Rushing to protect the next control point, I piggy-backed behind a horde of AI allies to avoid the opening salvo of enemy fire. I jumped into the area and immediately called my mech while my teammate activated his shield, giving me the time I needed to switch it into the defensive turret mode.

The turret mode makes your mech transform into a stationary defensive artillery gun. The game switches into a first-person viewpoint when manning it. You aim using the Oculus headset, in a similar way to Gunjack.

The mode was a highlight of the demo and a key tool to create choke points on maps. Within minutes I found myself in heated discussions with my teammate about which sections of the map we should cover and how we wanted to plan our defensive line. Sadly, our efforts didn’t pan out and the enemy team soon pushed through and won the first round, celebrating their victory with what I’m 99% certain is a German football song. 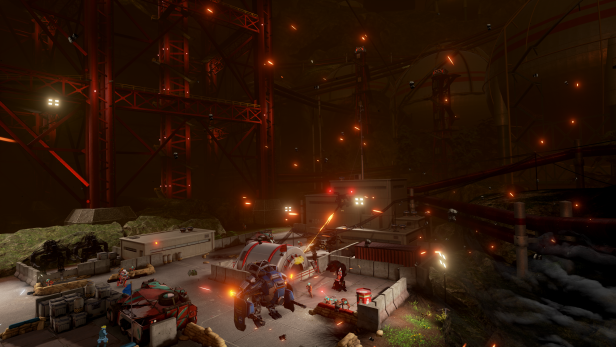 Jumping into the second round things got even more interesting. Confident that I was now familiar with the game’s dynamics, I rushed forward with my teammate to the first defensive point, began setting up shop, convinced I was out of range of enemy assault rifles. Two seconds later, boom, I’m dead and waiting to respawn. One of the human players had swapped loadouts to get a sniper-rifle-like weapon.

Only after the headshot did I discover that the game offers a variety of weapons, special abilities and summonable mech types, each with its own set of strengths and weaknesses. I didn’t get a chance to sample even a fraction of the different loadouts during my demo, but I saw everything from shotguns and sniper rifles to flame throwers; each weapon worked in different situations. The shotgun, for example, is a great crowd clearer, but it was a dud against human players with long-range weapons.

An “electric field” special ability was especially fun to use. The field replaced my shield ability and let me launch a dangerous area attack that stunned or killed any enemy caught in its wake, including mechs. There’s no greater feeling of gratification than conquering a mech while playing as piddly human. 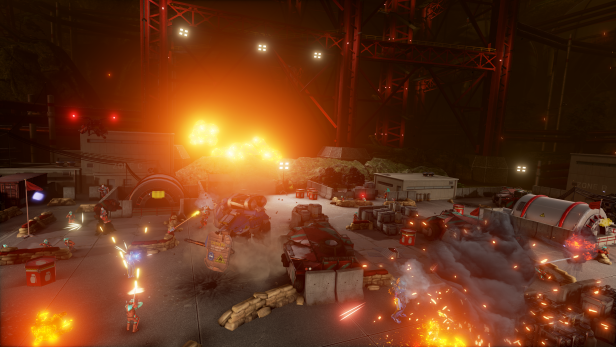 Landfall isn’t the in-cockpit, motion-controlled mecha shooter that I’ve been yearning for – and it doesn’t have overly developed RTS mechanics, either. But from what I’ve seen, it still has the potential to be an entertaining game.

The gameplay is a little retro, and the use of VR feels a little basic, but its multiplayer versus mode was an absolute blast to play. After just half an hour I’d started to learn the subtle features and gameplay dynamics that made Landfall combat feel oddly strategic and in-depth.

Whether the game delivers on this promise will largely depend on what type of multiplayer community it draws, and if there’s enough breadth of choice in its mech, weapons, abilities and maps to maintain interest.