Designer furniture is a tricky business. Slap the name of some European designer on a bedside table and you can add a zero to its price – but is it really worth the cash? However, despite the unmistakably Euro-tinged name, La Boite Concept takes a refreshingly functional and straightforward approach to the furniture game with the La Boite Concept LD 100.

It’s a compact computer desk that incorporates a stereo pair of hi-fi speakers, an amplifier, and more. At £600, it won’t attract the IKEA crowd, but for those poor on space and rich in cash, it really an replace a larger desk and dedicated hifi system.

For a gadget with such a clear, stark style, the La Boite Concept LD 100’s aims are reassuringly pragmatic. It wants to squeeze-in both a place for you to work and a sound system into as small a footprint as possible. 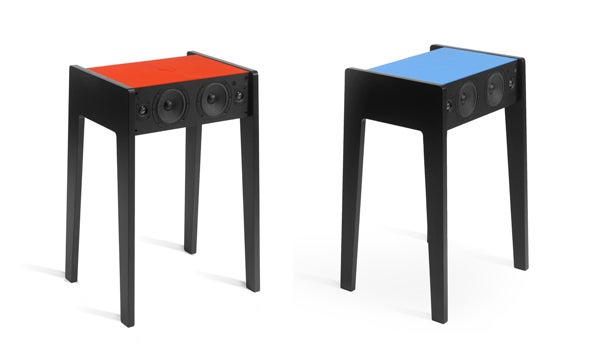 The La Boite Concept LD 100 is the smallest and most affordable in the company’s range of tables, and it takes up little more space than the dinkiest of computer desks. For laptop workers, the only issue is that there’s not a great expanse of desktop on which to use a traditional mouse – so you may have to up the cursor’s sensitivity to avoid careening right off the side of the table.

The idea behind this desk is an unusual but simple one, and putting the thing together is remarkably simple too. It comes in three parts. There are two sturdy legs that connect to the larger, heavier desktop part, which also incorporates the amplifier and speaker units. Rather than using screws, the La Boite Concept features a series of six locking nuts – each requiring a mere half turn of a crosshead screwdriver to lock in place.

This makes the La Boite Concept LD 100 tremendously easy to put together and take apart, and the extra weight that the internal amplifier supplies makes this much sturdier than the average compact computer desk. 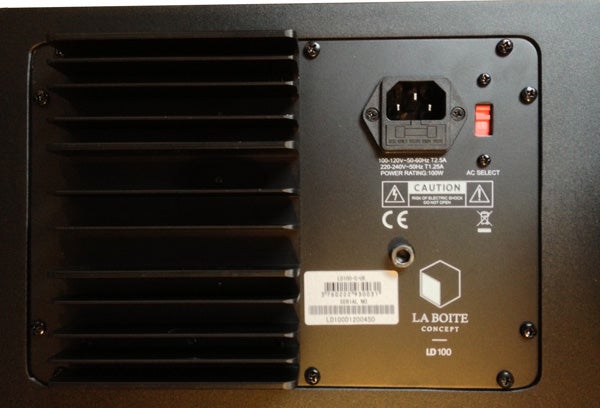 Naturally, for £660 you could get a much more impressive-looking piece of furniture elsewhere. There’s an awkward counterpoint between the building blocks DIY style and the slicker designer inferences of its name that never quite disappears in the La Boite Concept LD 100.

For example, the top of the LD100 desk is covered with a sheet of rubber (there to keep your laptop in place) that you can pull off to replace with another colour from La Boite Concept’s range if you fancy – it’s handy but a little nuts ‘n’ bolts in execution for something this expensive. However, there are also neat touches such as the groove carved into one of the legs, which hides the power cable. 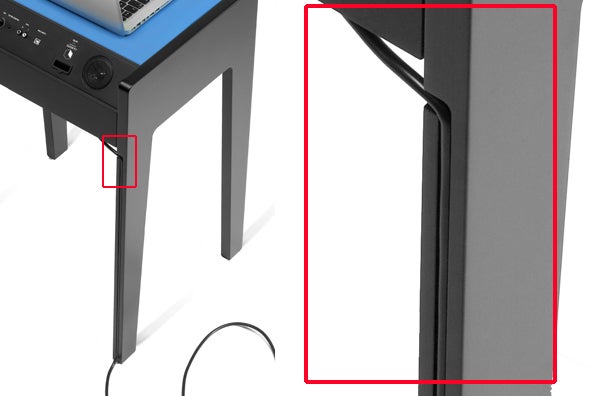 The desk part of the La Boite Concept LD 100 isn’t what we’re really interested in, though. It also packs-in six speaker drivers, removing the need to fit in the large dedicated speakers that so often dominate the desks of music lovers.

So, where are they? Four of the driver units sit on the desk’s front edge, and can be hidden behind a standard speaker grille if you want to protect them a little. The La Boite Concept LD 100 effectively jams together a pair of 2-way bookshelf speakers.

Towards the centre of this speaker panel are a pair of paper cone bass/mid drivers, each partnered with a tweeter towards the edge of the desk – in order to give the more positional higher frequencies some degree of stereo separation.

Sit at the La Boite Concept LD 100 and these speakers fire into your stomach. It’s an unusual setup, and one that feels as odd as it looks if you crank up the volume. Speakers push out air, and you will be able to feel that kick drum thump into your tummy if listening at a decent volume. Those who appreciate the physical thud of a good subwoofer may even like this, though.

Firing sound so far below your ears also brings up the issue of sound dispersal. Your ears hear, your belly button does not. La Boite Concept’s solution is to place an additional two treble drivers on the sloped rear panel of the desk. These fire higher-frequency sound backwards, reflecting off the wall the desk is placed against, and up towards your ears. 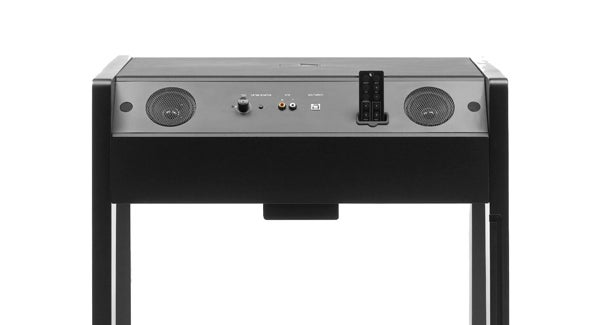 Many manufacturers of speakers that try to trick your ears into thinking sound is coming from areas where its speakers aren’t using DSP – digital signal processing – to create this effect. Like other aspects of the La Boite Concept LD 100, there’s nothing all that fancy going on here. However, it works to a reasonable extent. It diffuses your perception of where the speakers are a little, confusing your ears in a positive way.