Colour laser printers are not the novelty they once were and you can pick up a basic model for around £200. This new Kyocera Mita machine is far from basic however, so its near £1200 price tag shouldn’t come as that much of a surprise. And although the asking price is comparatively high, the running costs are way down on the cheaper competition.


This is a triple-input colour laser, with USB 2.0, parallel and 10/100 Ethernet ports as standard. It’s also extremely expandable and is capable from the start of the kind of duty cycle required for a medium-size workgroup.


The FS-C5030N is a tall and deep printer, but little wider than Kyocera’s well-known range of mono lasers. Like those printers, it also only requires toner to keep it running, with a lifetime drum and fuser unit. 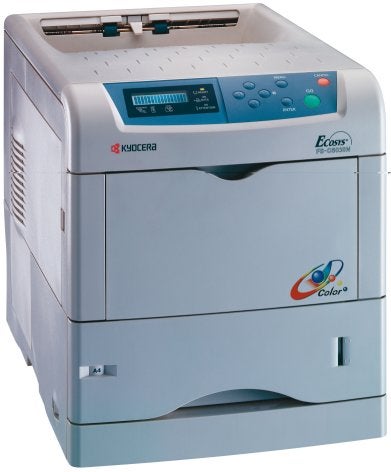 When you first set the printer up, it goes through a calibration cycle and you also need to print a colour registration sheet, from which you feed back index numbers to register the three main colour engines. You get to this using a two-line, backlit LCD display and control panel of six buttons. A further two buttons cancel a printing job and kick the printer back into life if it has fallen asleep.


Paper feeds from a substantial, 500-sheet paper tray and outputs to the top surface of the printer, but there’s also a multi-purpose tray, into which you can feed specialist media or up to 100 sheets of company letterheads and the like.


Set up is a doddle. Hinge the top cover up and you have easy access to all four toner cartridges, which simply clip into place. The only other consumable that needs checking is a surplus toner bottle behind a cover on the left-hand side.


There are software drivers for both USB and network use and once these are up and running it’s easy to use the printer with most common Windows applications. The driver includes flexible colour settings and the printer is remarkably versatile, particularly if you are prepared to spend some time with its proprietary Prescribe page description language.


You can buy a lot of extras for the FS-C5030N, including up to three additional 500-sheet paper trays, a duplex unit, an envelope feeder and a 20GB hard drive, which can be used to store regularly used documents, overlays, logos and the like. This is particularly useful if a number of people share the printer across a network. There’s also a slot for a CompactFlash card – an optional extra – to hold graphics, logos and Prescribe macros.

Kyocera Mita claims a print speed of 24ppm in both black and white and colour. It took us 28 seconds to print our five-page text document in normal mode, which equates to around 11ppm. That’s not a bad result, as draft printing is normally considerably faster.


On its web site, Kyocera Mita specifically says this printer is intended for office and business printing and is not for graphics professionals. We’d agree with this analysis, as text print is very clean and precise, with a slight sheen to characters. When you add colour, in the form of block graphics or coloured text, you still get a very vivid result with good, dense colours placed accurately on the paper.


When you come to colour photographs, though, while they’re good enough for something like house or motor particulars, or perhaps for advertising flyers, they don’t have the presence or accuracy needed for artistic proofs. Colours from the latest HP machines, for example, have a lot more life.


As with most Kyocera Mita printers, the only running cost is the toner. Although a toner cartridge for the FS-C5030N isn’t cheap, it prints 8,000 pages at five per cent cover, which equates to only 1.25p for a black page and 4.86p for a 20 per cent colour one.


This is quite a bit lower than from most of the colour lasers we’ve looked at recently. Most are up around 2p a page for black and 8p a page for colour. If you’re saving around 3p per colour page, the break-even point against some of the cheaper colour lasers would be around 25,000 pages, well within the lifecycle of this machine. While you’re reaching that point, you’re printing faster on a printer with more scope for expansion. 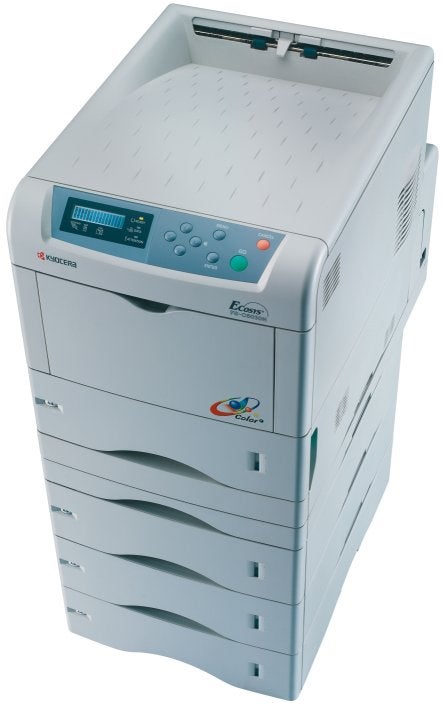 
The FS-C5030N is aimed at the workgroup market, but is sufficiently expandable to be able to take you from a small working unit to a substantial department, simply by adding extra resources, such as paper trays. Although the asking price may appear high, it’s this flexibility, combined with substantially lower running costs than those of cheaper colour lasers, which make it attractive. Print quality and speed are bonuses in this equation and overall it represents a very cost-effective package.