One step up from Kyocera Mita’s entry-level mono laser printers are machines like the FS-1370DN. Its main claims to fame are faster speed, increased expandability and lower running costs. In physical terms, it looks very similar to printers like the FS-1120D, though with a revised control panel binnacle on the right-hand side of the output tray. 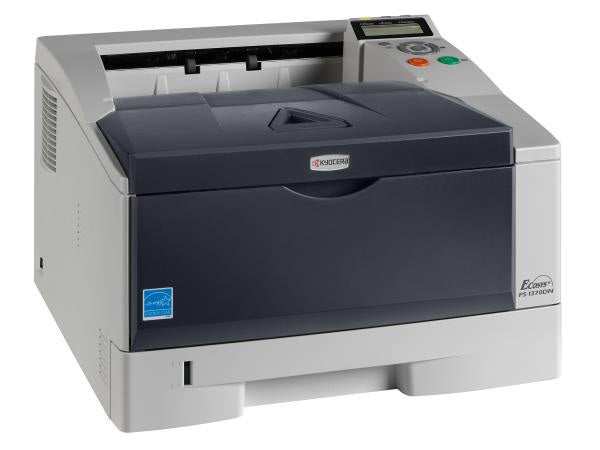 The case, in cream and black, is angular and conventional, but should fit into most office environments without any aesthetic clash. A 250-sheet paper tray at the bottom of the front panel is supplemented by a 50-sheet multipurpose tray, which folds down and pulls out telescopically from just above the main tray.


A further two, 250-sheet trays can be fitted underneath the printer as options, giving a maximum paper capacity of 800 sheets. The flip-up, triangular paper stop at the end of the output tray on top of the machine frames the part number on the top of the toner cartridge inside, through a transparent window. This is handy if you can never remember what to order. 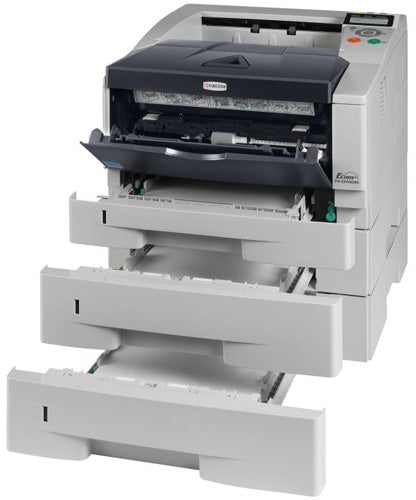 The control panel itself uses a thin ring of menu controls with an OK button in the centre, plus large orange and green stop and start buttons. The 2-line, 16-character, backlit LCD display is slanted up at an angle to make it easier to read, though without the backlight on in sleep mode, the word ‘Sleeping’ is virtually unreadable.


There are three LEDs, indicating Ready, Data and Attention, mounted at the top of the ridge holding the display, making them particularly easy to see from across an office. Two small sockets at the back connect USB and Ethernet, as the printer is network-ready out-of-the-box. 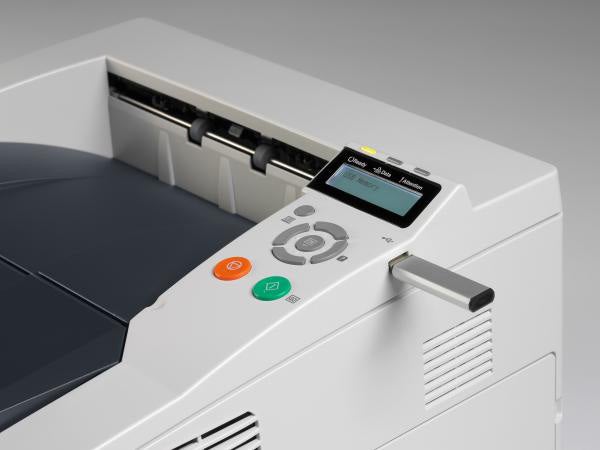 The front cover lifts to reveal space for the toner cartridge. As with most Kyocera Mita mono lasers, the drum and fuser are lifetime components and toner is the only consumable you have to replace. Plugging in the supplied starter cartridge, which has a capacity of 2,300 pages, starts a charging cycle that takes around 15 minutes. Once this is complete, the machine is ready to print.


The FS-1370DN comes with both PCL6 and PostScript Level 3 in emulation, and with drivers for a number of different platforms, including Windows, OS X and Linux, is very flexible in connection terms. There are also drivers for Kyocera Mita’s own page description language, Prescribe.

The printer is rated at 35ppm, which is a very healthy speed. Under normal circumstances, however, you’re unlikely to see anything like these speeds because it can take up to 20 seconds or so before the first page starts to print,. Our five-page text print, for example, took 24 seconds to complete, which is a speed of 12.5ppm. 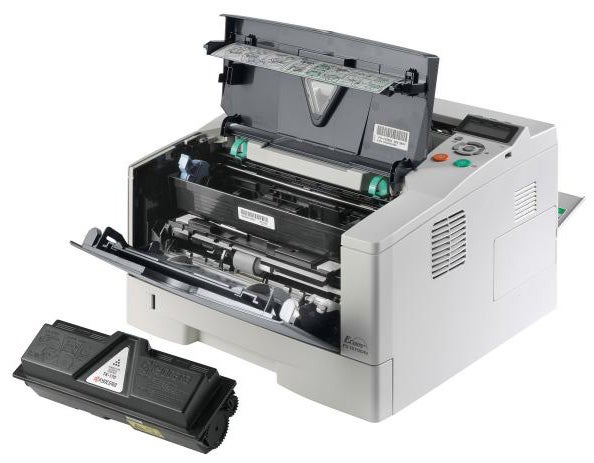 Switching to draft and Economode didn’t speed things up, with the machine taking exactly the same time. However, printing our 20-page document in normal mode doubled the speed to 25ppm. This is a very healthy throughput for a small mono laser printer, but it still doesn’t approach the headline figure quoted by Kyocera Mita.


The five-page text and graphics test was marginally quicker than the straight text document, as only a single page is rasterised, but it still registered only 13ppm. A 15 x 10cm photo on an A4 sheet took 14 seconds at the printer’s top resolution of 1,200dpi. 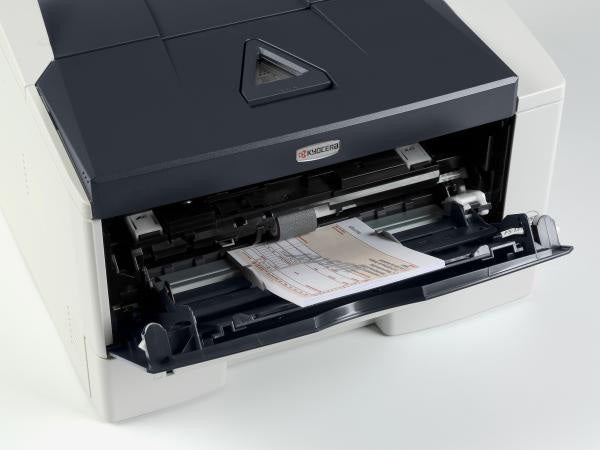 The printer has a duplexer built-in and printing our 20-page document double-sided as a 10-page job took 1min 16secs, which equates to a speed of 15.8 sides per minute, again a commendable result.


Text print from Kyocera machines is always clean and the 1,200dpi default resolution does a good job. Even emboldened text in headlines is well reproduced. Printing in draft and Economode saves toner but also gives text a slightly variegated look, with thin dark lines on the leading edges of characters and fainter grey for the rest. 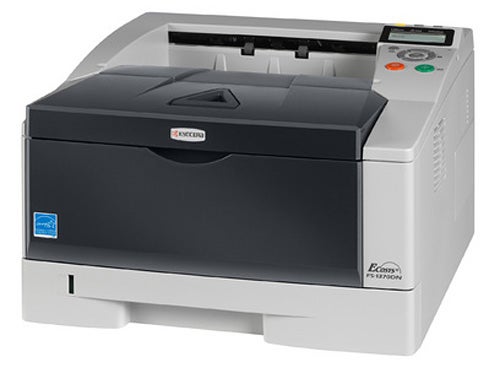 Business graphics are a bit blotchy and although there is a reasonable range of greyscales, there can still be some confusion in the mono reproduction of colour originals. This blotchiness also shows in photos, which are also generally too dark, so details in shadows are often blacked out.


As mentioned, the only consumable for this machine is the toner and a 7,200-page cartridge costs around £90, giving a cost per page of 2.1p, including 0.7p for paper. This is around 0.5p lower than most of the machine’s direct competitors and should therefore save a worthwhile amount over the life of the FS-1370DN.


Kyocera Mita has a very good reputation in the higher end of the business market for low-cost page printing and the FS-1370DN brings this down to the small workgroup level, where its speed and consumable costs stand it in good stead. Reproduction of greyscale graphics is not as good as from some of its rivals, though, so it would be best suited in an environment where the majority of documents are text-based.