Kyocera Mita is a very focussed company. It doesn’t make inkjet printers and it doesn’t bother itself much about the consumer market. It makes laser devices, pure and simple, from small, one-per-desk devices to huge, floor-standing departmental printers. Much closer to the one-per-desk end of the market is the FS-1300D. This printer is similar to the FS-1100 and would suit a SOHO or small workgroup environment.


Decked out in cream and dark grey, this is a modestly sized machine, a bit deeper than some personal lasers, but low to the desk and still with both a 250-sheet paper tray and a 50-sheet multi-purpose tray, which folds down from the front panel. 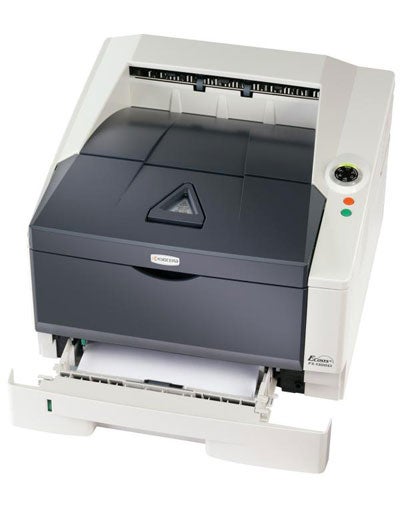 On top, the control panel has been reduced to a circular dial, with six coloured LEDs, indicating things like low toner, paper jam and incoming data. There are just two control buttons, to turn the printer on and off and to kill a running print job.


A small, inset, triangular paper stop folds up from the top panel and through the middle of the triangle you can see the top of the toner cartridge. As we’ve commented before, this would be more useful if it actually showed you how much toner was left in the cartridge. As it is, it just reminds you of the consumable’s part number.


The FS-1300D has only a USB 2.0 socket at the back, though you can add an Ethernet adapter as an option. You can also set the printer on two additional 250-sheet paper trays, for a maximum input of 800 sheets.


Kyocera Mita has patents on a unique coating for its photoconductor drum, which makes it a lifetime component, so it doesn’t need to be changed periodically as a consumable. The only thing that needs to be fitted is the toner cartridge, which plugs in easily under the top cover once you flip it up. The printer takes between 10 and 15 minutes to charge itself with toner the first time you switch it on, but after this it’s virtually an instant-on device.


Software comprises a pretty simple driver, enabling you to select the source paper tray and to choose single-sided or duplex prints. You can select up to 16 pages per sheet, too, but there are no facilities for watermarks or overprinting.

Kyocera has the right to be quite cocky when it comes to print speeds. Printing a 20-page, single-sided text document took the FS-1300D just 52 seconds, which equates to 23ppm. Kyocera claims 28ppm for the printer, so on a long print run you should get close to this speed, an almost unheard-of event in the world of printer reviews. Even 23ppm is a very reasonable speed for this class of machine. 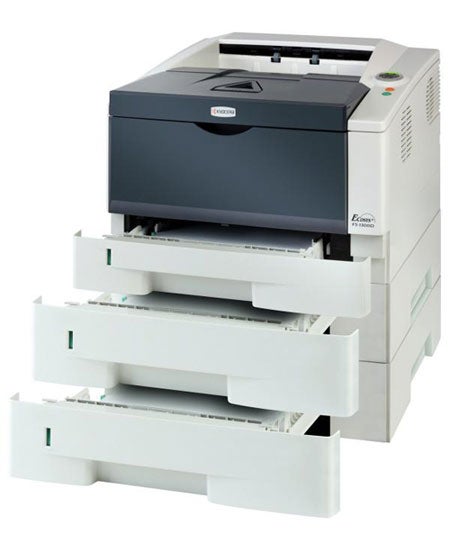 Printing duplex can be a long-winded procedure in some printers, but the FS-1300D feeds paper through very efficiently, following the second side of one sheet directly with the first side of the next. Our 20-side text document took 1:20, giving a very respectable print speed of 15spm.


Even the 15 x 10cm photo print completed in just 13 seconds, or over four photos a minute. Perhaps that speed is one reason for the slightly patchy photo print, with some blotchiness in the sky and obvious dot patterns thrown up by the maximum 600dpi resolution.


A laser printer’s main task in life is not to print pictures, though, and when printing business graphics and especially when printing text, it does much better. Both text and graphics are light, not nearly as forceful as some other makes of laser printer. They’re never light enough to start losing parts of characters, though, and this delicate touch gives text, in particular, a professional, almost letterpress quality. 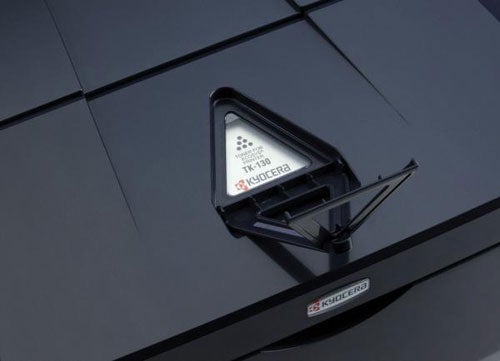 As we’ve mentioned, the single consumable in this machine is the toner cartridge, which is good for 7,200 ISO pages. Using typical Internet prices, this returns a cost per page of 1.72p, including 0.7p for paper. This is around 0.4p cheaper than the page cost from the FS-1100 printer we tested a while back but, surprisingly, pretty much in the middle of the field for mono lasers from a variety of suppliers that we’ve tested recently. It’s not just a long-life drum that determines consumable costs.


There are a lot of things about the Kyocera Mita FS-1300D to be liked. It’s neat, quick ??” nearly as quick as the spec-sheet claims ??” and duplexes very efficiently. Maintenance is particularly easy and just about anybody in an office could be trained to replace the toner, cutting specialist supervision to a minimum.


Cost per page has dropped quite a bit across rival manufacturers recently and this machine doesn’t show the kind of savings some Kyocera Mita offerings have in the past, but it’s still not expensive compared with many others. Driver functions are a little thin on the ground, but as a reliable, easy-to-use mono laser printer, you won’t go far wrong here.