Kyocera Mita claims to be one of the most ecologically-minded printer companies in the world, as well as being able to save you money in the long run. Its printers, and now this multi-function device, use a lifetime laser and photoconductor drum, so you only pay for the toner. But does this save you money when you consider the total cost of the machine?


The FS-1018MFP looks like what it is, a personal laser printer with a flatbed scanner stuck on top – perhaps FA Porsche was given too tight a design brief. Kyocera has integrated the two devices, though, so you can produce copies and scan to email in colour too. 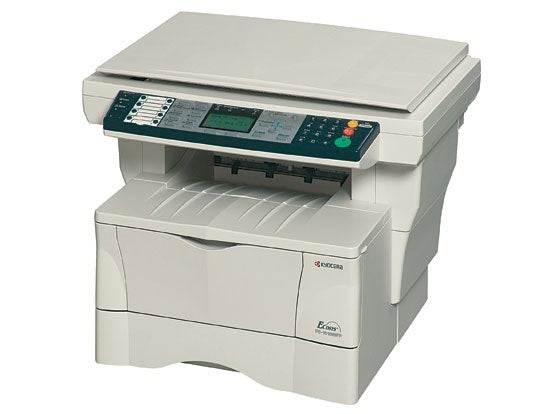 A 250-sheet paper tray slides out from the front of the machine and feeds through an S-shaped path to eject onto the top of the laser printer section of the machine, directly under the scanner and control panel. A secondary, multi-function feed-tray folds out from the front and can take up to 50 sheets. Being a Kyocera machine, you only need to load toner to get it running, and this is easily achieved by opening the top and front covers and sliding in a cartridge.


The control panel for copying and scanning is designed for ease of use and integrated with a five-line, back-lit LCD panel, but this is less than intuitive. Take the copy size control as one example. If you want to produce a copy at 60 per cent of the size of the original, you select Custom Zoom and leave your finger on the down arrow button, while it beeps 40 times to count down from 100 per cent. There’s no way of entering numbers from the numeric keypad.

There are standard presets, such as 50 percent, 200 percent and resizing between A4 and A5, but the zoom range is not that great, from half size to twice size. Even some humble, ink-jet all-in-ones offer 25 to 400 percent.


The scanner is a straightforward flatbed, which can scan in what Kyocera describes as ‘full-colour’, actually 24bit, but with the default 96MB of memory, can only manage an optical resolution of 300dpi. This is enough for most office applications, though, including OCR. A set of eight, fast-dial addresses is maintained, so you can send directly from the scanner, with multi-page emails possible if you have the automatic document feeder installed.


Installation is a bit more awkward than with some machines, as Kyocera includes a driver CD for its whole range of printers, complete with manuals and leaves you to dig around for the one you need. Once installed, the driver includes good page imposition settings, so you can print from two to 25 pages per sheet. You can also include watermarks, though not overprints, and mark pages as Confidential or as Samples.

We spent some time looking for a TWAIN scanner driver for the FS-1018MFP, but eventually discovered that, although you can scan from the flatbed glass to an email, you can’t initiate a scan from within a Windows application, such as Word, Publisher or Photoshop. Although we can appreciate it would be awkward to scan across a network link from the machine, it’s a shame that a locally-connected PC can’t use the scanner in the FS-1018MFP. You can’t send faxes, either. 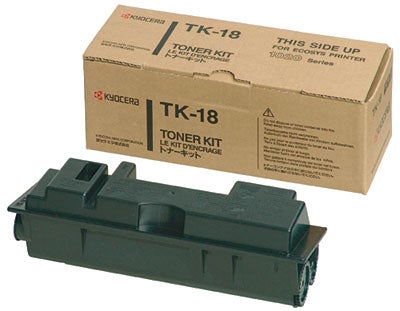 Our standard benchmarks ran without problem on the FS-1018MFP, though we didn’t see speeds similar to the claimed 18ppm. The five-page document produced around 11ppm, which is still a reasonable speed for a small business printer.


Print quality is generally very good, with fine, crisp text and pleasantly unadulterated greyscales. Text is a little too light and spidery in places, but this is only really noticeable at small font sizes.


There’s very little evidence of striping in even pale or gradated grey tones, which is unusual. Although there’s some micro-banding running vertically down our test print, you have to examine it pretty closely to see this. For general office use – the main purpose of this machine – print quality is well above average. 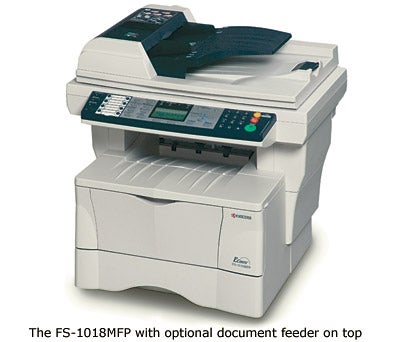 
So yes, the FS-1018MFP is cheaper to run, but not by enough to make it the only choice. It prints well, is easy to maintain and has a network connection built in, but it also has a relatively awkward control panel and limits to its scanner resolution, scanner availability and copy size. Despite the pictures in much of Kyocera’s literature, the £50 document feeder is an optional extra, too. With all this in mind, the FS-1018MFP doesn’t quite cover all the bases that a device like this should.