Kyocera sells a range of laser printers into the small business to enterprise market space and the FS-2000D sits at the lower end of its workgroup offerings. Its comparatively high asking price of just over £400 reflects its speed rating of 30ppm and the inclusion of a duplex facility as standard for double-sided printing.


Kyocera laser printers have always looked functional, rather than aesthetically pleasing and the FS-2000D is no exception. Its cuboid shape is relieved by a slight curve to the front of its top panel and a scallop out of the front of its paper tray, and while its computer-beige colouring is broken up by a couple of dark-slate panels, it’s still basically a big box that prints.


Paper feeds from a substantial, 500-sheet paper tray underneath and you can fit a second, identical tray below that, as an option. Above the tray is a pull-down, multipurpose feeder, which can take a further 100 sheets. 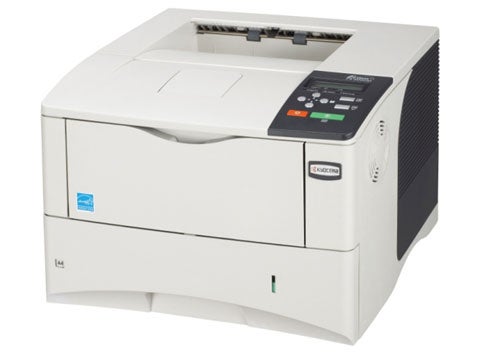 The control panel is simple and easy to use, with a diamond of four buttons plus two for Menu and OK. There are also separate Stop and Go buttons, required for initiating a standalone print. One of the interesting features of the FS-2000D is its ability to print pdf files from a USB memory key. While this may present a security issue in some companies, it can also be a useful quick extension to ‘sneakernet’ prints, when the printer isn’t networked.


We’re surprised there’s no Ethernet connection as standard on the FS-2000D, as it’s sold as a workgroup printer. Although both USB 2.0 and parallel connections are provided, networking shouldn’t be an optional extra in a mono laser costing £400.


Because of the printer’s lifetime drum and fuser assembly, the only consumable that has to be installed is the toner cartridge. To do this, you lift a flap at the front of the top cover and clip it in. The printer performs a one-off toner charge when you first switch it on, taking around five minutes, and from then on it switches regularly from work to sleep modes, in between jobs.


Software installation is primarily the Kyocera driver, which includes support for PCL and PostScript in emulation, as well as the company’s own Prescribe printer language. You can install custom fonts or Prescribe scripts into optional, internal memory cards or a MicroDrive.

Kyocera claims print speeds of up to 30ppm for the FS-2000D and while these are likely to be for draft mode print, we managed to print a five-page text test piece in 23 seconds, giving it a real world, normal print speed of just over 13ppm. The mixed text and graphics page, which is a five-off print of a single page, completed even more quickly, in 20 seconds, so touching 15ppm.


The printer’s built-in duplex unit handles two-sided printing economically, taking each page back in from the output tray to print the second side. Print speeds are slightly lower, but at 13ppm, are still very respectable.


Print quality isn’t the best we’ve seen from a mono laser printer. Text output is clean and fine, though there is some spatter and emboldened text is a bit over-printed, losing a little detail. Our text and graphics prints threw up a few problems with the graphics, where some greyscales which should have shown as different tones merged into one. 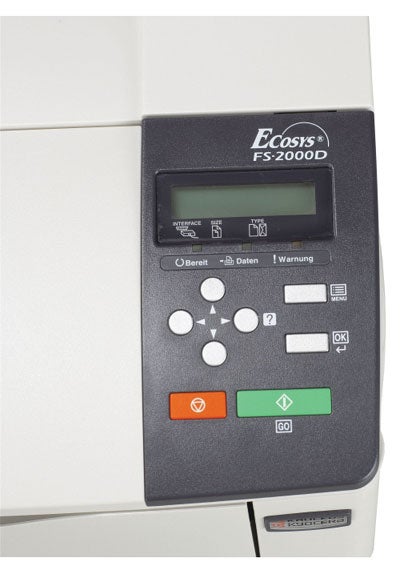 Best quality print, at 1200dpi, is also not perfect. Although detail is good and there’s some reproduction of shadow detail, areas of smooth transition suffer from noticeable banding. While photo reproduction isn’t the main use of mono laser printers, the prints we saw were bettered by other mono lasers, too.


Kyocera’s unique lifetime drum and fuser means that the only consumable you’re paying for is toner and a cartridge sufficient for around 12,000, five per cent cover pages costs just under £60. This gives a page cost, including VAT and paper, of 0.95p.


This figure is among the very lowest we’ve seen for a mono laser, or indeed any printer in the last couple of years and supports Kyocera’s claims for a very low cost of ownership. It also makes maintenance extremely easy, because of the simple toner replacement and the high capacity of the cartridge.


The key feature of the Kyocera FS-2000D, like so many of its stable mates, is it’s low running costs. At less than a penny per page, even the comparatively high price of the machine seems reasonable. However, the print quality we saw under test is no great shakes and isn’t as good as from some previous FS models. While for many general office uses it will be adequate, we’ve seen more balanced greyscale output from several other mono lasers under test.