We all love a bit of nostalgia, don’t we? Only last weekend I decided to recapture my youth by surrounding myself in a life size castle built entirely out of Lego bricks. It’s safe to say the shop assistants in the Lego store weren’t especially pleased, but in the end I only spent a couple of hours in the cells at my local constabulary, so I deemed it a win.

For others, harking back to their youth involves dipping into memories of trips to their local arcade. The romantic amongst such an audience will no doubt picture an adventure packed trip to the British seaside, complete with ice creams, theme park rides and a penchant for spending a vast chunk of their pocket money in whatever Sega or Namco machine the amusement park on the pier had been able to buy. For me, the closest I ever got to an arcade machine was in the far less romantic setting of Birch Motorway Services on the M62, which probably explains why I took to Lego instead.

Nonetheless that’s exactly what Kung Fury: Street Rage is designed to tap into. Unless you’ve been living under a rock for the last few months, you’ll be well aware that Kung Fury is a 30 minute long, crowdfunded 80s pastiche film written and directed by David Sandburg and starring David Hasselhoff, both as a voice in play and in the accompanying music video. It’s a film that unashamedly mimics the music, movies and wider popular culture of the 1980s, making a Streets of Rage-esque brawler a logical tie in. 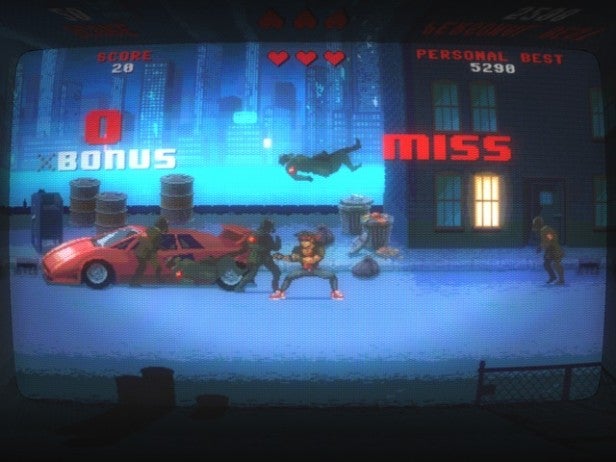 Hello There has gone the extra mile with Kung Fury: Street Rage, however, with the game not just adopting the pixel art graphics of the era, but also displaying it on a curved, TV screen complete with rolling scoreboards and introductory animations that perfectly replicate the experience of the coin-op games of the age. It’s quite something to behold: playing a game on a flash new iOS device that, in about as literal manner as can be achieved, feels like a little pocket of play from decades long past.

It’s because of that retro feel, of course, that the game is able to keep things simple. Indeed, there are only two actions within the entire game – attacking to your left, and attacking to your right. Each is tied down to tapping the associated side of the screen, with enemies approaching en masse to try and take you down. As is the case with most arcade games, success is just a case of surviving for as long as you can. Each tap of the screen triggers either a punch or a kick, with Kung Fury making you look like a superhero for as long as you manage to stay alive.

Death comes as no surprise, either. Take a hit, and you lose a life. Take three hits and you’re dead. The idea, therefore, is to time your attacks on either side so that your foe can’t get to you, with score multiplier racking up so long as every swipe or kick you make lands. Miss a punch and it drops back down, which – given chasing a high score is your ultimate aim – is something of a kicker. 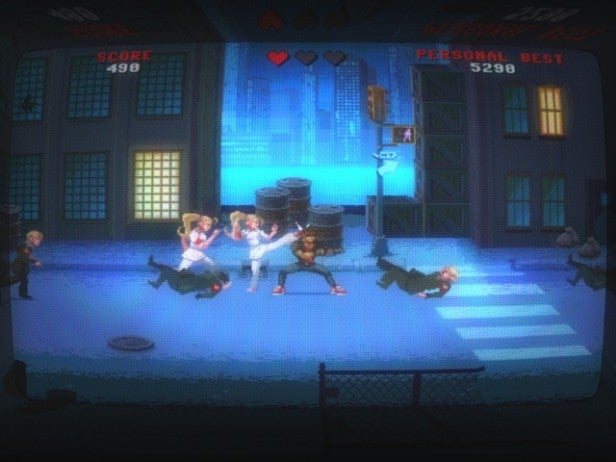 That is about all there is to it, but that’s not to suggest that anything on offer here is in any way substandard. What Kung Fury: Street Rage does brilliantly is capture the ethos behind the button bashers of the time and translate it perfectly for that 30 second mobile quick fix. It doesn’t have the depth of a series like Sega’s Streets of Rage, for instance, but then that’s not something that most iOS players would like to take on during their bus ride home.

As a result, as long as you don’t expect Kung Fury: Street Rage to change the world, what’s on offer here is a fun and furious nod to the games industry’s past, delivered with passion and more than a little class. If you’ve exhausted the movie of the same name already, Hello There’s tie in makes light work of giving you somewhere else to relive your past glories, all without having to part with any pennies. That sounds like a direct hit to me.

Verdict
Though arguably not as deep or complex as many of the coin-op classics it’s looking to emulate, few games capture the spirit of the 1980s games scene as well as Kung Fury: Street Rage does. On that basis alone it’s worth a download, though it helps that’s it’s also fun and incredibly simple to play, serving up a scoreboard that features The Hoff himself.