What is the Koogeek S1 Smart Scale?

Fitness apps are all the rage at the moment, but while a phone or wearable can be trusted to diligently track the gruelling physical activity you’re undertaking on a daily basis, they can’t ascertain your overall weight. And that’s obviously a key piece of data when it comes to monitoring effective exercise.

That’s where a new breed of “smart” scales comes in. These act like the traditional set of scales you’d find in any bathroom, but with a twist – they sync your data with your preferred fitness app to give you a more accurate picture of how your fitness regime is going.

The Koogeek S1 Smart Scale is one of the most feature-packed we’ve seen so far, and comes with both Bluetooth and Wi-Fi support for effortlessly syncing information with your fitness app. It retails for just under £50.

The majority of the Koogeek S1 is fashioned from plastic, while the top section is made of glass. When the unit is idle it looks like any other set of bathroom scales, but the moment you step onto it a blue LED display appears, kindly informing you of your weight. 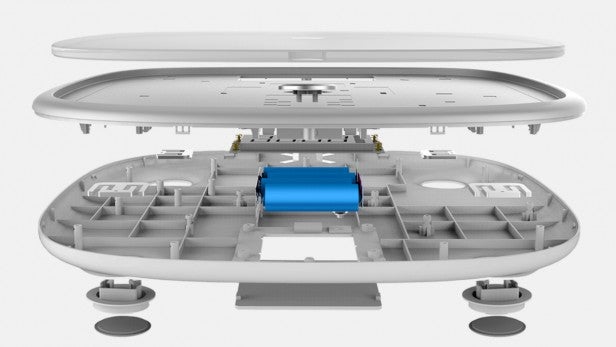 Flipping the device over reveals four rubber legs and a battery compartment for four AA batteries. This compartment also contains the reset button, which is used not only to restore the S1 to its default state, but also to connect it with your Bluetooth device or Wi-Fi network. The flap which covers the batteries is quite fiddly to remove until you get the hang of it.

I tested the Koogeek S1 with an iPhone 7 and found that it syncs data to Apple’s Healthkit app without any issues. The proviso is that you have to have Koogeek’s own app installed first, and this requires you to create an account and sign in. There’s the option to use your Google Plus or Facebook social networking profile to complete this process, but Google Plus wouldn’t work for me so I opted to create an entirely new account from scratch.

In order to sync data you’ll naturally need to link the Koogeek S1 scale to a device or Wi-Fi network. If you decide to take the Bluetooth route and pair the scale with your phone, then you’ll need to make sure that the phone is always within Bluetooth range when you’re taking a weight reading. The Wi-Fi option – which the rival Xiaomi Mi Scale lacks – is a more sensible choice as it connects the S1 to your home wireless network, removing the need to have your phone close to hand. 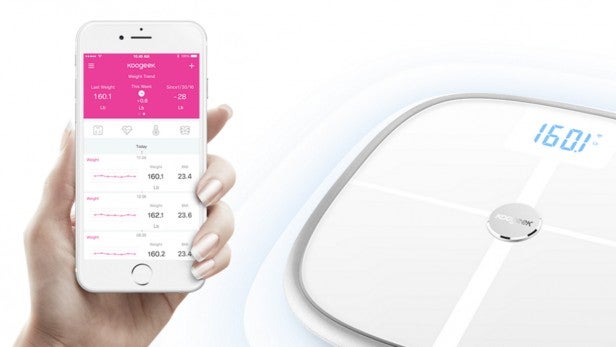 The connection process is a little fiddly and took a couple of goes to work properly, but once it was hooked up the scale worked like a dream. The only issue you might have is positioning within your house; in my case, the bathroom is at the back of the building and out of my Wi-Fi router’s range, so I had to use the S1 in my bedroom instead.

In any given household it’s unlikely that you’ll have the scale all to yourself, but thankfully the S1 can log the weights of 16 different users at any one time, as long as they’re connecting via the app on a Bluetooth link.

Koogeek S1 Smart Scale – In Use

Once you’ve signed up to the Koogeek app, connected your S1 scale and decided on the perfect place to position it, you can get onto the more serious business of tracking your weight loss over a prolonged period of time. Stepping onto the scale delivers a readout which is then seamlessly uploaded to the Koogeek app, which – once configured to do so – shares the data with Apple Healthkit.

Koogeek’s app does a pretty decent job of tracking your progress, displaying weight fluctuations via a handy graph. It also gives a BMI rating (based on the height data you have given it) and it’s possible to set a target weight in order to give you some incentive to shed those pounds. Speaking of which, the Koogeek S1 can be configured to display Pounds, Stones or Kilograms, depending on your personal preference. The device is incredibly accurate; I tested it against my own (non-smart) scales to make sure I was as out of shape as it told me I was.

The Koogeek S1 doesn’t just track your weight and BMI, however – according to the manufacturer, it contains four sensors and “Bioelectrical Impedance Analysis technology” which allows it to also track your body fat mass, lean mass, bone mass, total body water, Basal Metabolic Rate and visceral fat. Getting the readings for these elements requires you to mount the scales barefooted, at which point four indicator lights flash to denote the process has been successful. 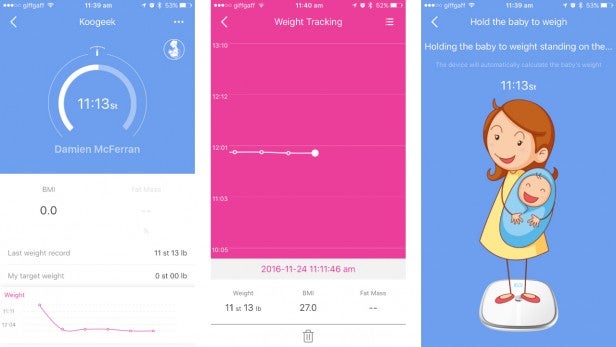 This data can then be consulted using the Koogeek app, which also includes explanations of exactly what each element means (albeit in rather badly translated English). With no other way of testing these areas I’m not sure how accurate the S1’s findings are but, and to be honest most users will be content to stick with just using the device for weight readings. As another metric to track your body’s changes, they will be useful, however.

Those of you with very young children will be pleased to know that like the Xiaomi Mi Scale, the Koogeek S1 comes with a baby-weighing mode. Before you recoil in horror at the notion of people placing their newborn infants onto the cold glass surface of the scale, this process involves weighing the adult first and then weighing them again holding the baby. The scale works out the difference in weight and – bingo – you have your baby’s weight.

Should I Buy The Koogeek S1 Smart Scale?

Given that the Xiaomi Mi Scale is cheaper and does practically the same thing, you might want to ask how important Wi-Fi connectivity is to you personally. The ability to pair the scale with your home wireless network is the big differentiator here; I appreciated the fact that I didn’t need to have my phone nearby whenever I wanted to take a weight reading, but you may feel otherwise.

That aside, the Koogeek S1 Smart Scale looks great, is well built and functions superbly. If you’re looking for a way of accurately tracking your overall body mass as part of your new “smart” fitness drive, then this is a solid option.

Wi-Fi connectivity bumps up the price, but this is still a solid purchase for fitness fans.