A general-purpose office laser printer needs to offer more than a personal or SOHO machine. It’s likely to be used by more than one person so it needs to be quicker at printing and it needs network connectivity. It will also benefit from a larger capacity paper tray so you don’t have to refill it constantly as well as a second paper tray for printing on letterheads and blank pages without reloading. These are all things the Konica Minolta PagePro 4650EN offers.


Coloured in cream and dark grey, the PagePro 4650EN looks discreet, yet functional. Its layout is very conventional, though it does have twin paper trays set into its front; one with a capacity of 150-sheets and the other a generous 550, enough for a full ream of paper. You can add two more of these high-capacity trays as well as various stackers, face-up trays and a duplexer – a bit surprising this last item isn’t included, given the printer’s price. 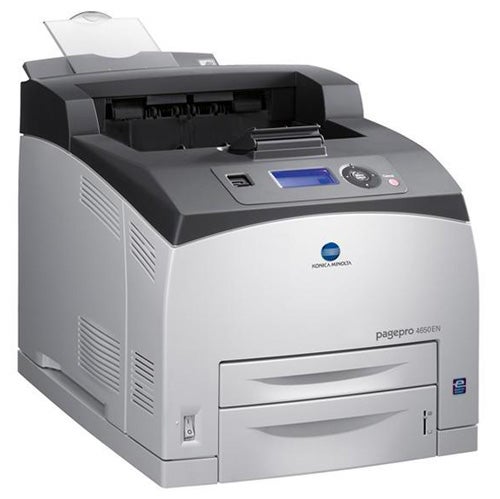 More surprising, though, is Memory Direct; a useful USB socket on the front panel that can be used to read and print JPG, PDF, TIF or XPS files directly from a USB drive or from a PictBridge camera. At least it can if you fit a 1GB Compact Flash card or optional hard drive inside the printer. With the current price of memory, it’s very hard to see why Konica Minolta doesn’t fit a gigabyte internally and enable this function by default. Other, less expensive lasers offer ‘walk-up’ printing like this as a matter of course.


The backlit LCD can show up to four lines of text, but is hampered by the worst looking font we’ve seen on a printer display in a while. All spindly and jagged, it’s readable, but looks like the output from an old pen plotter.

There’s a four-way control ring on the right of the display, with a Menu Select button in the middle and a pink Cancel button beside. This set is all you need to navigate the printer’s menus. At the back are sockets for USB 2.0, Ethernet at up to a gigabit and an old faithful parallel port.


The combined drum and toner cartridge fits through a slot in the top, sliding down at a steep angle into the centre of the printer. Unusually, since they’re normally brightly coloured, we didn’t, at first, notice any protective tape on the cartridge to pull out to release the toner. Konica Minolta’s toner release tape is in fact the colour of parcel tape and so wasn’t very conspicuous. More unusually, the printer didn’t report anything wrong with our oversight and just sent through blank pages.

Software comprises a series of PageScope utilities to provide network control and a well-appointed driver that supports cover and separator pages, watermarks and overlays, multiple pages per sheet and 600 or 1,200dpi resolutions.


Konica Minolta rates the PagePro 4650EN at 34ppm, which is fast, but our speed tests didn’t get close to this speed. The five-page text print took 19 seconds and the text and graphic print was two seconds faster. This gives a maximum, real-world speed of 17.6ppm, only about half the quoted figure. We tried printing the same document in economy mode, but it still took 16 seconds, so it’s hard to see how the company arrives at its speed figure.


The printer managed our 15 x 10cm photo print in just 11 seconds, very close to the claimed 10.5 seconds time for first page out, so its comparatively slow multi-page output isn’t a function of our including rasterising time in the overall print figure. 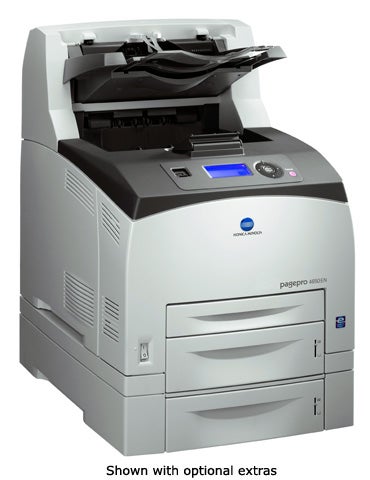 Print quality for text is very good, with sharp, well-defined characters and smooth curves and diagonals. The default resolution is 600dpi, which is fine for text, but the printer can be switched to 1,200dpi for graphics and photo output. Business graphics are well reproduced, though greyscale fills can be a little stripy. This is also true of photographic images, where backgrounds show some banding, though it’s not severe.


The only consumable in the PagePro 4650EN is the one-piece drum and toner cartridge and this is available in two capacities: 10,000 and 18,000 pages. Using the higher capacity unit for better economy gives a cost per page of 1.78p for a five per cent cover page. That’s a bit on the high side compared with other lasers we’ve tested in the same price bracket, but still low in absolute terms, compared with cheaper lasers and nearly all inkjets.


The PagePro 4650EN is a robust office laser printer with some useful features, such as the twin paper trays. Print quality and cost per page are both good and it’s mainly the cost/feature analysis that lets it down. For the same money, you can get a laser with an improved spec, including duplex print. The optional Memory Direct USB print on this printer should be standard, too, since it’s only memory (which is cheap) that’s needed to make it work.