A colour laser printer for under £150 is still a fairly rare animal and Konica Minolta’s Magicolour 1600 W is aimed, according to the company, at the student and home office market. This makes it a direct competitor for some higher spec inkjet printers, so why should you go down the colour laser route?


The answers are usually print cost and speed and we’ll look at both these aspects a bit later. This is quite a small printer for a colour laser, but quite a bit bigger than a typical single-function inkjet – more the size of an all-in-one. 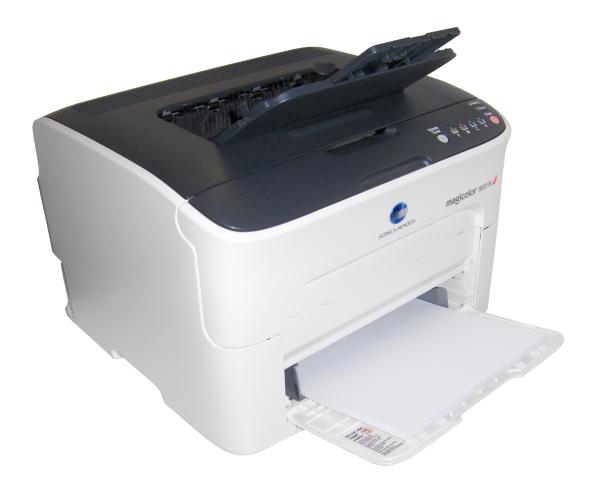 Coloured in black and cream, the printer looks very neat when closed, but to print from it you have to open the top cover, which becomes the output tray, and the front cover, which then takes up to 250 sheets as a paper feed tray – there’s no multipurpose feed. There’s also no cover for the paper when the tray is open, so you’ll probably want to store the paper away and close the machine up when not printing to avoid dust settling on the paper.


The control panel consists of Ready and Error indicators, as well as low-toner lights for each of the four colours. There’s a job cancel button and another marked ‘Rotate Toner’, which is the first indication that this machine uses a carousel-based laser engine.


The carousel mechanism means there’s only one imaging drum and each of the four colours is laid onto this by rotating its toner cartridge into position. These mechanisms tend to be cheaper to make, but the technique means each colour image has to be built up in four stages, which takes around four times as long as printing a single colour. 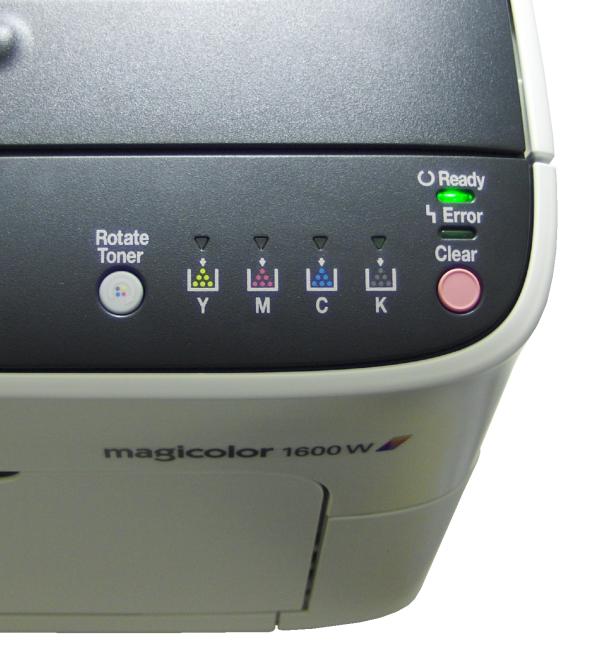 
The Magicolor 1600 W comes with all its components preinstalled, so you can almost plug-in and go. In fact, of course, you have to install the supplied drivers, but this is the work of a few moments. Drivers for Windows from 2000 onwards are provided, though there’s no support for OSX or Linux.


The Windows driver is well specified and includes support for poster prints and up to 16 pages per sheet, as well as overlays, watermarks and reasonable control for colour matching. There are also fields in the driver for duplexing and alternative tray options, though there’s no mention of either of these features as options.

Customers considering this machine will probably be looking at alternatives such as the Samsung CLP-315, which is a very similar price, but the Konica Minolta machine beats it on all our speed tests. Our five-page black text document took 27 seconds to complete, which is a speed of 11.1ppm and when we increased the page run to 20 pages, the speed also increased to 16.7ppm. This is against a claimed speed of 20ppm for black, so not far off the spec.


The five-page text and colour graphics document took 1:09, which is equivalent to 4.35ppm, and the company claims 5ppm, so again pretty close. If you compare these speeds to a typical inkjet printer, such as the top-of-the-range, £90 Canon PIXMA iP4600, the Konica Minolta machine takes about a third the time of the Canon to print our five-page text and colour graphics document, so you are certainly gaining speed, even with the slow (for a laser) carousel mechanism. 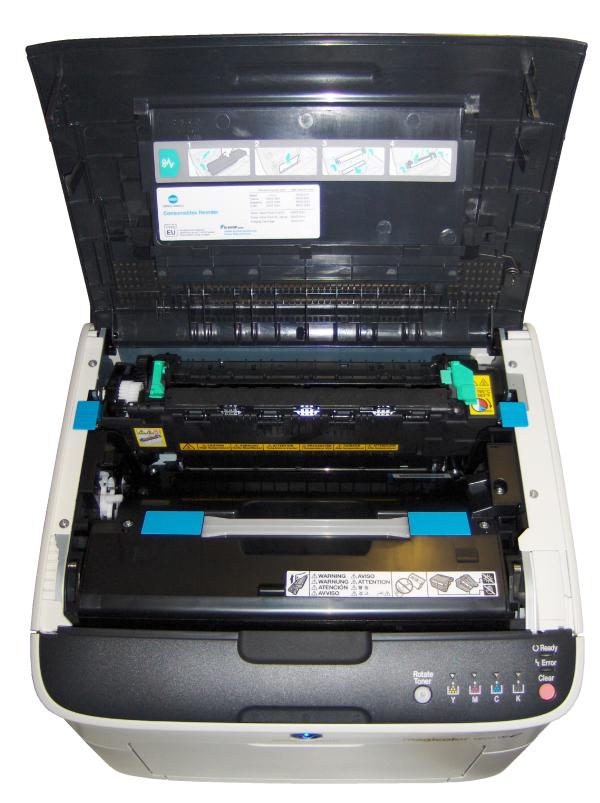 The quality of output from the Magicolour 1600 W is what you’d expect from a laser printer. Black text is generally clean, though there is a very slight fuzz around character edges. For most purposes, you won’t notice this and colour business graphics are bright and solid. The vivid colours produced are ideal for eye-catching colour highlights, though when we printed our sample photograph, the colours would have benefited from a slight toning down. There are good controls in the driver for doing this.


As well as the toner cartridges, which are available in 1,500 or 2,500-page capacities – only 2,500-page for black – you will need to replace the imaging unit after 45,000 black pages or 11,250 colour ones and the fuser unit after 50,000, whatever their colour content. It’s quite possible a colour laser printer aimed at this market will never reach 50,000 pages during its service life, but we’ve included the costs of these consumables to produce a page cost of 3.71p for black and 13.4p the colour. The colour cost is a bit high, but the black cost is comparable with similar machines.

This is a sound, entry-level colour laser printer, which produces good-quality print quicker than many of its competitors in both laser and inkjet fields. It’s easy to use and service and not too big, if space is at a premium.


You shouldn’t, however, think of a colour laser as a particularly cheap option when it comes to printing colour pages. Inkjet printers, although you may need to change the consumables more frequently, can actually come out cheaper. If you’re a student or sole trader, these kinds of cost differences may be particularly important to you.