The vast majority of the TVs we see come from somewhere “out east” – Japan, Korea, Taiwan or China. But today we’re heading south. Way south. For the Kogan brand behind the Kogan LED55 KULED551HDAA TV on our test benches today is actually Australian.

Kogan has dabbled its toes in UK waters before, but only this year has it really made a full-blooded assault on our infamously tough TV marketplace, setting up its own online retail website and launching a surprisingly full range of TVs. And sitting right at the top of this range is the Kogan LED55, a 55in TV with a Freeview HD tuner, 100Hz processing, and a surprisingly slender design made possible by its use of edge LED lighting.

The home for Kogan’s UK flagship screen – which remarkably only costs £749 – is a passably attractive one, thanks to a high-gloss finish and some respectable build quality. The TV’s lines are a bit ‘standard’, it has to be said, and its bezel is wider than we’re becoming accustomed to seeing, making the Kogan LED55 quite a dominating presence. But at least its rear end is quite trim for a budget TV. 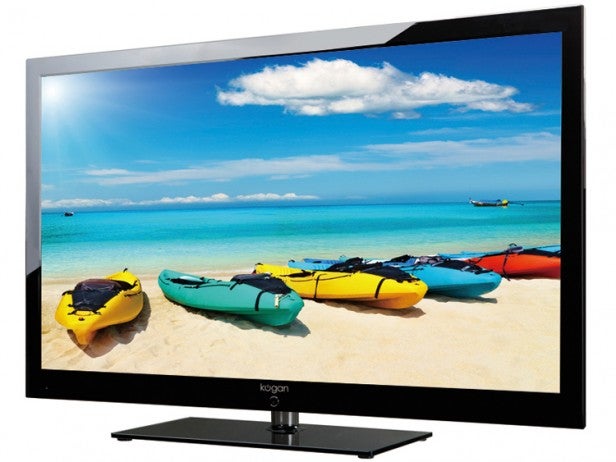 Connectivity is perfectly decent too. HD fans should be satisfied by the provision of a trio of HDMIs, for a start, while there’s also a D-Sub PC port so the TV can double up as a computer monitor; an Ethernet port; and a USB jack that’s able to play video, music or photo files using the AVI, MP4, DivX4, DivX5, XVID, MP3, WMA, JPEG and BMP file formats.

The USB port can also be used, impressively, for recording from the HD tuner, with USB drives up to 1TB supported. This sort of functionality certainly goes beyond what you would normally expect to find on such an aggressively-priced 55in TV, and raises hopes that the Ethernet port might extend to such “value added” functionality as DLNA streaming or even online Smart TV functionality.

Sadly – if predictably – this does not prove to be the case. The Ethernet is there simply because the inclusion of the Freeview HD tuner demands it. It doesn’t provide a pipeline to your PC or any wider online services. Oh well. Such is budget TV life.

If you’re the sort of person who tends to tremble in fear at the very sight of a few onscreen menu options, the Kogan LED55 could be the TV for you. For its onscreen menus are just about as basic as basic can be, in terms of both their presentation and the limited amount of functionality and adjustments they contain. The only surprise is an elementary colour management system, which lets you tweak the balance of the red, green and blue image components.

While the Kogan’s onscreen menus are straightforward, though, trawling through them is not. This is because the set’s remote control system is really pretty horrible, with rubbery buttons, a vague layout, and worst of all, a far-too-narrow effective reception range that prevents the TV responding to your remote commands unless you’ve got it pointed at the screen from exactly the right angle. Very annoying.

Hard experience unfortunately suggests that we shouldn’t expect particularly great things from a really large, ambitious TV that comes from a very small brand like the Kogan LED55. And unfortunately the Kogan pretty much lives down to expectations.

Our biggest single gripe with its pictures concerns its pretty dreadful 100Hz processing system. This does smooth away judder and reduce resolution loss over moving objects as you would hope, but it only does so at the expense of some of the most prominent and excessive unwanted side effects we’ve seen. There are smeary haloes around moving objects, there’s flickering over very fast areas of motion, and bright contoured edges around moving objects can ‘glimmer’ at you in a most unnatural fashion.

Not surprisingly, this all had us quickly heading into the onscreen menus to turn the 100Hz processing off. Only it turned out that no such option exists. We couldn’t actually turn the offending processing system off. Yikes.

A call to Kogan confirmed that we weren’t missing anything – though it also elicited a response from Kogan to the effect that a firmware update was in the offing that would add an option to turn the 100Hz feature off. However, we haven’t been able to test this for ourselves, and since the update can only be introduced via USB, we can’t help but wonder if it will really find its way onto existing stocks of the TV.

In any case, such amateurish nonsense is hardly the sort of thing Kogan really wants to be doing when trying to conquer a new market. In fact, not including 100Hz deactivation on an on-sale TV is such a fundamental “fail” that it has to make you wonder just how well Kogan really understands what’s going on inside its own branded TVs. 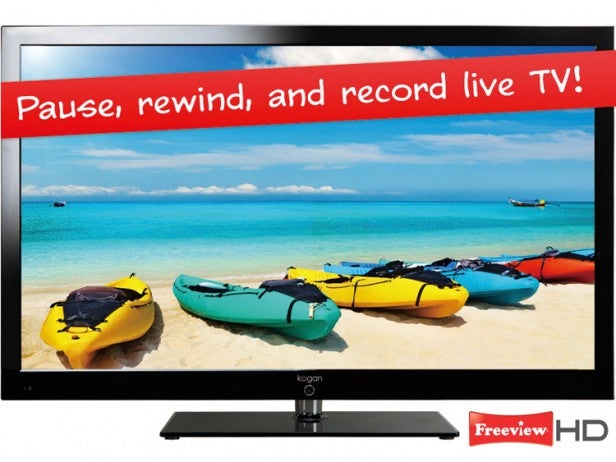 It didn’t help during our review, either, that the online instructions manual for the TV (you don’t get a paper one) turned out to be for the wrong model. Grrr. Talk about not making a good first impression…

Another issue with the Kogan 55in model’s pictures will sound familiar to regular readers. For as with many edge-lit 55in TVs, the picture is a little prone to areas of backlight inconsistency. Each corner of the image during dark scenes betrays a small jet of light shooting in for an inch or two over the image – a phenomenon that’s clearly quite distracting at times.

These obvious corner ‘jets’ are joined, moreover, by subtler areas of inconsistency elsewhere during dark scenes. You can reduce the impact of this issue if you make sure you reduce the sets brightness considerably, to barely a third of its maximum setting. However, the brightness point at which the backlight inconsistencies disappear also happens to be the point at which shadow detailing in dark scenes tends to be squeezed out of view.

The Kogan struggles with colours too, on not one but two levels. First, colour tones don’t look especially natural for video viewing, no matter what we tried with the basic colour management system. People on screen, in particular, look like they been doused in an orange-toned fake tan, or else they look like they’re ready to throw up.

The other problem is that colours don’t appear with any real precision in terms either of the range of tones the screen can produce, or the way they’re blended. As a result, where there should be subtle differences in a colour’s tone across an area of the picture, you tend to get the impression of just a single, flat expanse of the same colour. This turns skin tones into plastic, and makes some video sources look cartoony.

This lack of colour subtlety probably plays a part, too, in the fact that the Kogan’s HD pictures don’t look especially sharp. They look cleaner and more detailed than standard def, but there’s not that ‘sparkle’ of extra resolution that we see with a really excellent HD TV.

Wrapping up the bad – or at least, average – news are the KULED551HDAA’s input lag and  audio performances. Where input lag is concerned, we measured around 55ms – a high enough figure to marginally impact your gaming skills that’s probably not helped by the undefeatable 100Hz system. As for audio, while the set sounds OK when handling very straightforward ‘chat’ type audio, it becomes very thin and even a little painful on your ears when the going gets tough. 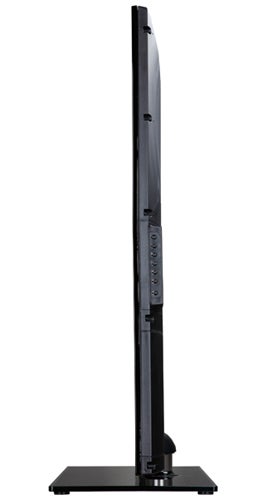 To be fair, while the Kogan’s problems prevent it from being a TV we can recommend even given its affordable price tag, it isn’t a total dead loss. Its black level response isn’t too bad, for instance, in that apart from the little patches of non-uniform extra brightness mentioned earlier, you can get a colour that looks more like black than the sort of milky grey commonly found with budget TVs.

You can actually still get a decent amount of brightness and dynamism out of the picture too, even after pushing down the brightness setting to counter the backlight consistency issues. And colours while not particularly natural or subtle are at least punchy, leaping off the screen in a way many budget screens can’t match.

Motion blur is sufficiently minimal, meanwhile, that we wish we could have seen how the TV’s motion fared without the detestable 100Hz system in play, for we suspect that it would have turned out quite respectable.

Verdict
Kogan can certainly claim to have made an eye-catching start to its latest UK TV campaign simply by selling its 55in flagship TV for under £750. However, a couple of careless mistakes together with a generally very average performance mean that we’re yet to be convinced that it has what it takes to mix it up with the more established names.

That’s not to say we don’t want to see them keep trying, though.